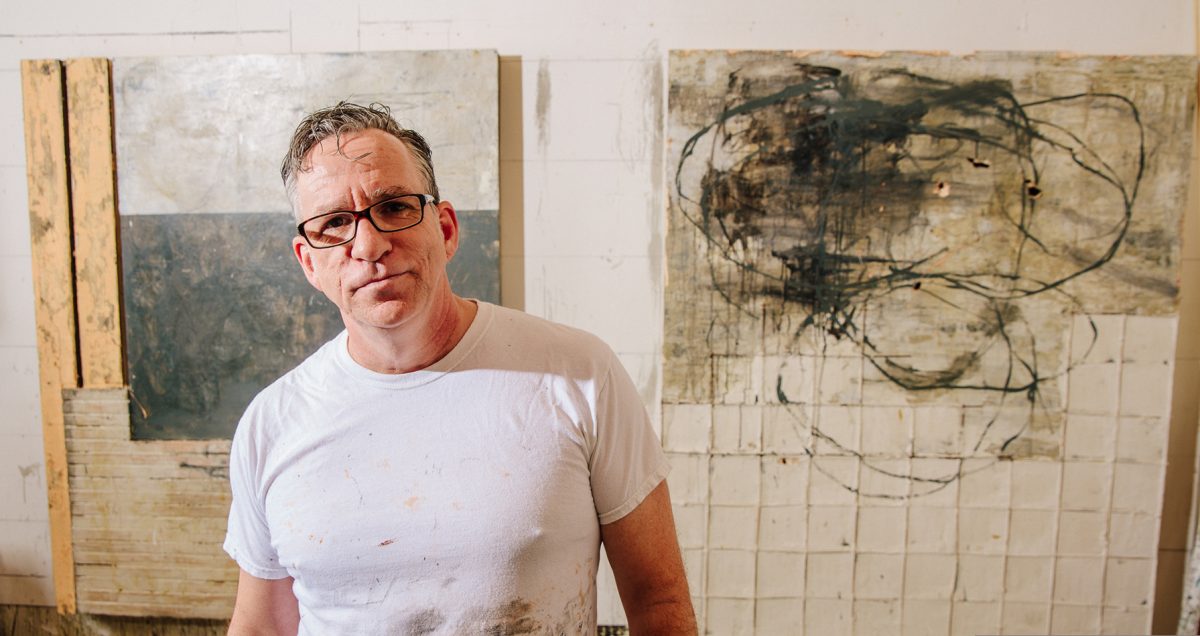 John O’Connell’s new work fascinates on several levels: they are abstracted 3-D compositions with spare painted portions that beg for lots of time to absorb. Mark-making and writing are there but mostly obscured beyond recognition; inexplicable cuts are evident in the surfaces of the structures, some modular sections are almost sled-like in construction, others squared off.  “It started maybe a year, year and a half ago,” says the artist. “All these new ideas, all the possibilities, all the new strategies that can be folded into this work: That’s what it’s all about for me – making things that I haven’t seen yet.”

The majority of this new work was in a recent solo show at NAU Art Museum in Flagstaff, A Subjective Archaeology, including massive pieces as big as 15 feet long. A selection of more modestly-sized work is featured this month in Salt Lake City at A Gallery’s exhibit of the artist, Fabricated, where the abstract visual vocabulary the University of Utah professor has been refining for years crashes into the basic construction skills learned in the postindustrial New England of his youth. The results are impressive, a high-water mark for a prolific artist whose journey, sometimes angry, frequently spiritual, has led him to see painting not as visual representation but a form of existential re-presentation.

A misconception about this artist’s work is that it is made up of found materials. The wood, in particular, looks aged, much of it like pallets “reclaimed” from a chain-link-fenced junkyard guarded by angry pit bulls. In fact, O’Connell always uses new materials. “That’s a kind of conceptual underpinning for this work,” he says. “Historically my work is about the idea of how we put together a sense of identity to interact within the world. So, I identify myself in terms of my gender, in terms of my socioeconomic status, my ethnicity, my nationality – I kind of put all those things together . . .  so that I have this ego that walks through the world and is able to act in the world,” he explains.

“The idea is that nothing is found, nothing is authentic. These surfaces that look like they may have 100 or 200 years of history on them, the reality is the only history that is there is the history I put there. It is a true surface, it is wood, but at the same time it was made yesterday of completely new material. . . . I never put in anything real. If there’s a rusted nail in there, I make the nails rust. There’s nothing that’s a natural authentic thing.

“On a more personal note,” he adds, “I want to explore what I tell about myself, what I ask about myself. Is that true? And how true is that? And when I realize it’s just something I’ve been handed by somebody, by culture, by my parents, by school, then I get to renegotiate that; I get to tell a new story,” O’Connell states flatly.

Born in Worcester, Massachusetts, O’Connell grew up in the Northeast and never lived in a house that was less than a hundred years old. Now he lives here in another one: a spotless yet charming and comfortable place where the shelves near the dining room are filled with captivating art books that would take an uninterrupted decade to peruse. That surely would be considered time well spent. The very large studio he built behind his home in 2006 would have been bigger still if zoning had permitted.

There is a garden in the back, too: strictly flowers, not a vegetable to be had.  “Beautiful, useless stuff,” he says. “I grew up in an urban place; gardening wasn’t really on the menu.”

He was an Irish kid in a big Irish neighborhood. “There was a lot of poetry but there was a lot of brutality in this place also. And so instead of me expressing that into the world I express that in [the studio].” His father was an engineer (something O’Connell would later study); his mother helped raise four children “on a woman’s wages working in high-tech production,” he says. There wasn’t much to spare. “Both of them did the best they could with what they had,” he recalls. “I never wanted for food or clothes or a place to live.”

When O’Connell was 18, his father suffered a stroke that would leave him progressively more disabled and his son progressively more bewildered — and angry. His dad’s loss of language affected O’Connell profoundly. He would die 22 years later, by then severely debilitated. That led O’Connell to some existential queries: What does it mean to be in this world? What am I in the world? “Is there any resolving of that? Probably not. But the way I was taught was to just get better and better questions,” the artist recalls.

This stems, he says from the Dionysian concept of how something is being re-presented – “We all get together and we drink a lot of wine and rather than some symbolic idea of the god appearing the god would actually appear – that kind of idea. I’m not making a picture of history in a painting; I’m making a painting that has history.

“If I can express that in a symbolic, spiritual, ritualistic way, I can walk through the world and be OK and not have a problem with anything directly. I just think those experiences, the narrative, have colored where I was and where I came from so there was a good amount to process. So instead of prayer or good old Buddhist meditation that’s what I do to negotiate the world and find my relationship to divinity, to people, to all those things. “

He works on between five and 10 pieces at once “so there’s a kind of mass production – the energy’s moving from here to here . . . I like that because I’m kind of a nervous guy. I used to be a figurative artist, very much into representation. Eventually I realized that for this organism, that is me, this is not the right movement. I need to be moving around and burning the energy. Driving nails in, hitting things is kind of spiritual, therapeutic; however you want to think about it.”

In his own life, he says he thinks of art merely as a spiritual practice. He terms a studio a “bracketed space, a different place,” saying he emotionally processes a lot in there: “the loss of my father, the loss of a relationship, all those things are figuring out how I’m supposed to act. And I do it on a daily basis. So I’m always in there and I’m always thinking about what’s going on in my life: what has tension, what doesn’t have tension, it’s kind of a meditation and a moving through.”

He says organizing beforehand is central. “You can’t stand there and mix a little blue, a little green . . . no, you can’t do that. So I organize big vats of paint [he works in water-based paint and materials exclusively] so I don’t have to do that when I’m actually in the throes of the work.

“And then when I’m doing that, there’s also that me that steps back and says I like that, I don’t like that – just like we do in the world,” he says with a smile. “And I’m going to get rid of that and I’m going to hold on to that. So it’s a history and a relationship of these multiple states. A kind of binary oppositional state that says ‘this is good and this is bad’ and a kind of much more emotional kind of unconscious state that says, ‘I’m on the train and I’m riding it.’

“In one place I realize I’m on the train, in the other I am the train,” he continues. “So putting those two things together you end up with something that’s organized and aesthetically pleasing but still has that kind of brutality. That two-sided coin is important to me: both the beauty and the brutality, the quintessential human experience.”
His paints sit in deep, clever pull-out shelves he built himself, as he did the rest of the interior of the huge studio. During the past two years the table saw and the chop saw were moved from a corner to the center of the room, joining other power tools. Wood is like a paintbrush now, he says.

“In my 20s I built houses and I was a construction guy and so I have those skills and I can fabricate really quickly. I went to a lot of school to get away from that kind of work. Now my studio is kind of like a construction site.” Indeed it is.

O’Connell graduated from the very selective Massachusetts College of Art in 1995 with both a BFA and a Bachelor of Science in Art Education. He got his MFA at the University of Connecticut in 1999 and went on to teach at Middle Tennessee State University in Nashville before coming to Utah. Teaching is a great job, he says. “You have these passionate people. I went into the arts because I couldn’t say what I needed to say any other way. And I think most students are there for very similar reasons. And I’m there to mentor them, not so much to instruct. To get them to access what is in them.”

He acknowledges that he started late, making his first “really bad” painting when he was 28. He had gone to engineering school, played music, built some houses, “there was a big experimental ‘I don’t know what the hell I’m doing’ period. Once I got connected to this art stuff it became clear what I was supposed to be doing.”

He liked the feeling of being almost absent when he was focused on his first piece. “I’m not thinking about my bills, I’m not thinking about anything else. I’m completely outside myself working on this thing. And I liked that so much that I organized all my work around that particular sensation – not being present . . . “

O’Connell’s earlier series (part of which can be seen on his Facebook page) is more gesturally based.  Now, he says, “the gesture is there but it’s there as stains or rust or some kind of natural phenomenon. I’m just mimicking that. It’s more about this layer on top of that layer and taking that layer off and going back and forth and putting things on and taking them off and there are these really complex relationships.” And then he will do something he describes as “really dramatic” – taking a power drill or belt sander “and pulling it down and going back and forth.”

He still uses the calligraphic mark of his previous work, but not to the same extent. “It’s kind of how I moved from figurative work to abstraction. The calligraphic mark goes in there and gets buried. And I do a lot of writing but very rarely is it legible – I don’t really want you to read what I’m writing but I’m writing and that’s much more personal to me. It’s about asserting something and then burying it.

“When you find a handle on this crazy thing I think sometimes we can stay a little too long in what we know, and I think maybe I was guilty of that. It became a little too efficient. And I’m really glad that I’m into something now that I’m not quite sure about,” O’Connell says. 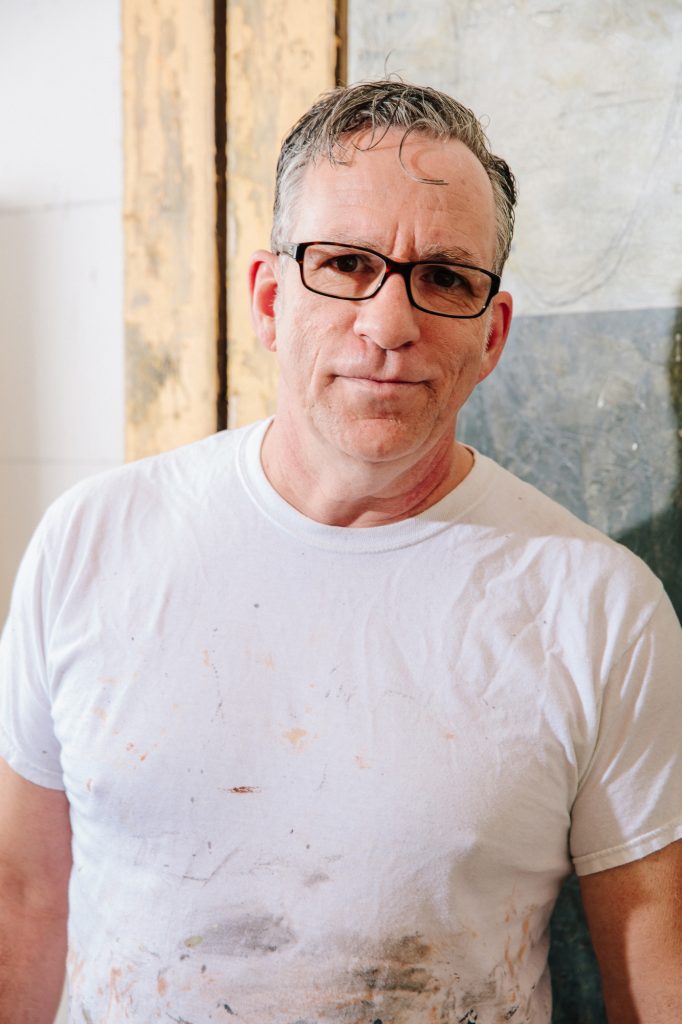