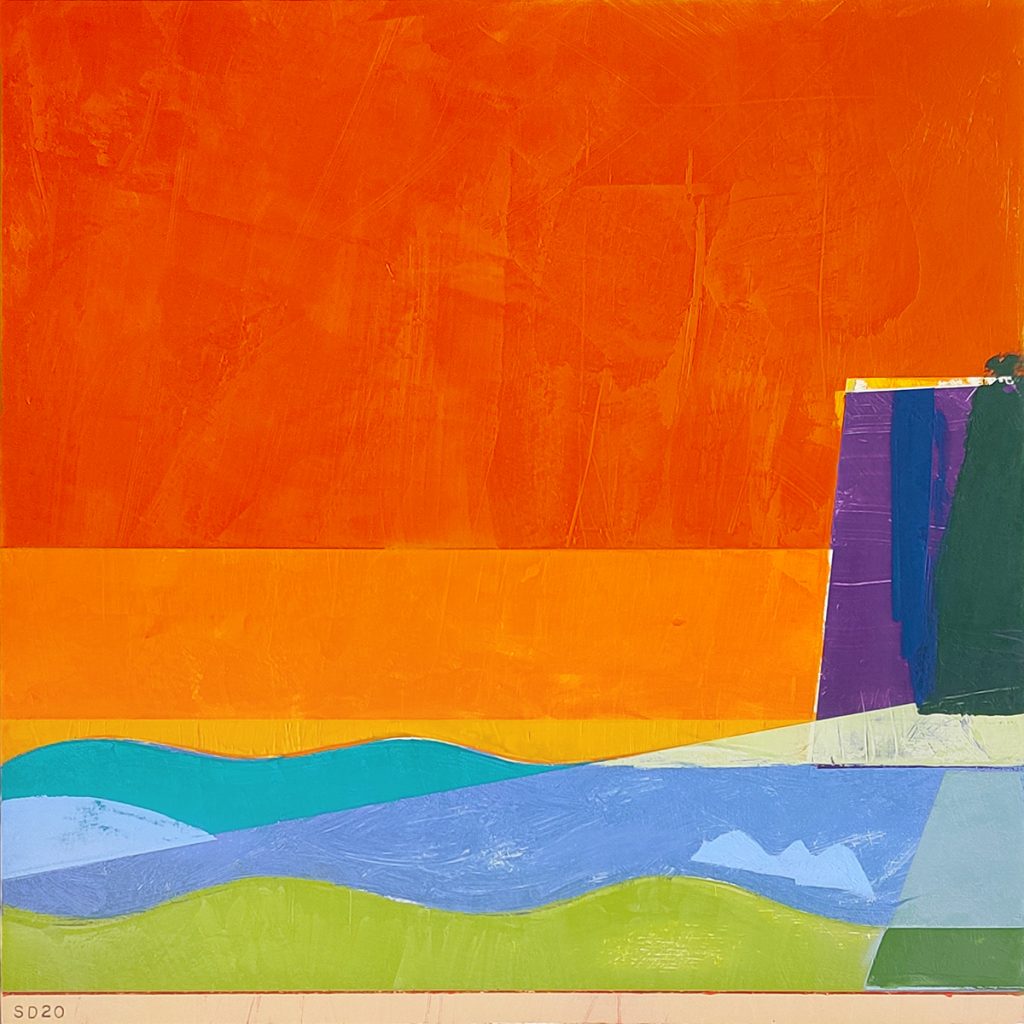 The ladies and gentlemen at Phillips had a grand time bringing Spring to the main gallery for the current show – it hits you right in the solar plexus as you walk in and leaves you, well, hopeful.

They do it with color, of course: screaming tangerine walls hold works bright with watermelon-red highlights or mellow-yellow accents; shivery white walls loom to the east. Much of the palette is lifted from Steve Dayton’s brilliantly hued Cayucos Tile works where even the occasional black streak seems seasonally Springy. 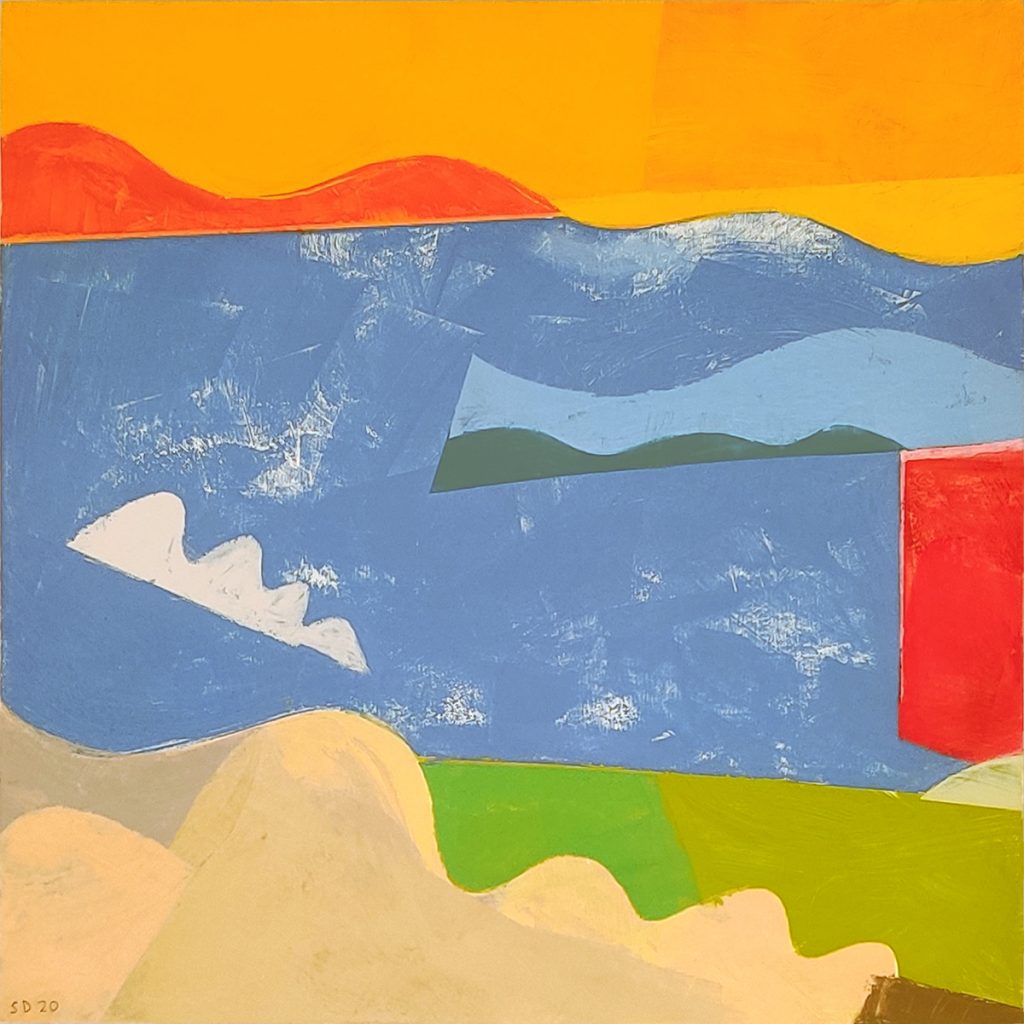 Those pieces are based, gallery director Meri DeCaria tells us, on Dayton’s favorite place in the world: a town of a couple thousand people on California’s Highway 1 that boasts six miles of white sand beach that stretch to famed Morro Rock — one of the best places for surfing and swimming in the state. There is a 982-foot pier built in 1872 by Capt. James Cass during a time when Cayucos was a vital port for ships sailing from LA to San Francisco. All this is so brilliantly reflected in Dayton’s abstracted works of acrylic and tissue paper on board scattered about the gallery walls that one longs to be there. You’ll see. Maybe Dayton could arrange a Fun Bus trip. ( Born in Idaho and reared in California, the artist served a mission for The Church of Jesus Christ of Latter-day Saints in Germany between high school and college, earned an associate degree in advertising design from Ricks and a BFA in graphic design from BYU, so his idea of a Fun Bus would no doubt differ drastically from this writer’s.) 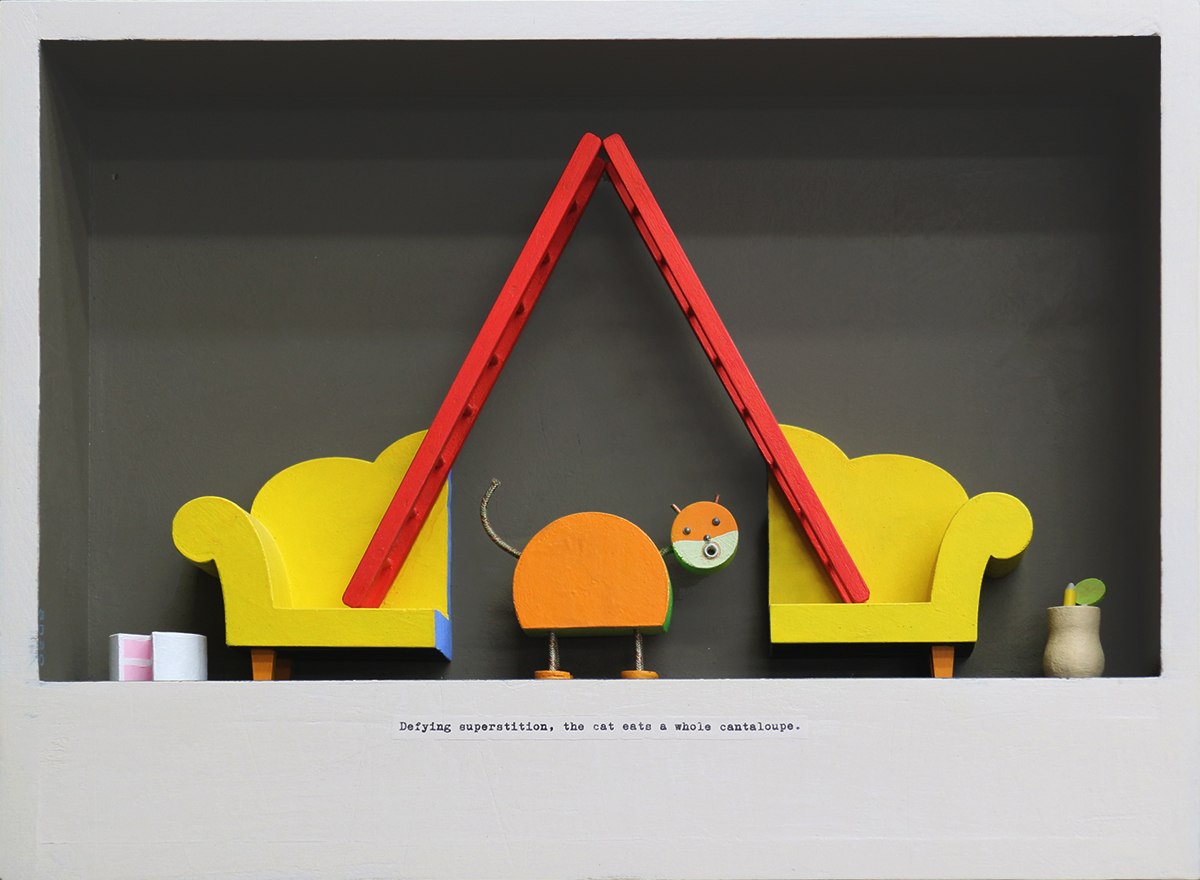 Still, Dayton is a funny guy. Very, very funny. Droll and witty; imaginative and captivating. His 3-D stuff is waaay over the top. I mean, picture a wee living room built inside a shadowbox featuring a teensy orange tabby with just a bit of white left on its face perched between a sawed-in-half sofa — sitting beneath a ladder that straddles the two sofa pieces. The title? Wait for it: “Defying Superstition, The Cat Eats A Whole Cantaloupe” (I want this one SO bad!) Or take the yellow chair hanging from the east gallery wall with a blue hand extended from the chair’s back into a puddle of green paint on the seat. That’s titled: “At Least It’s Some Kind of Hand Out.” 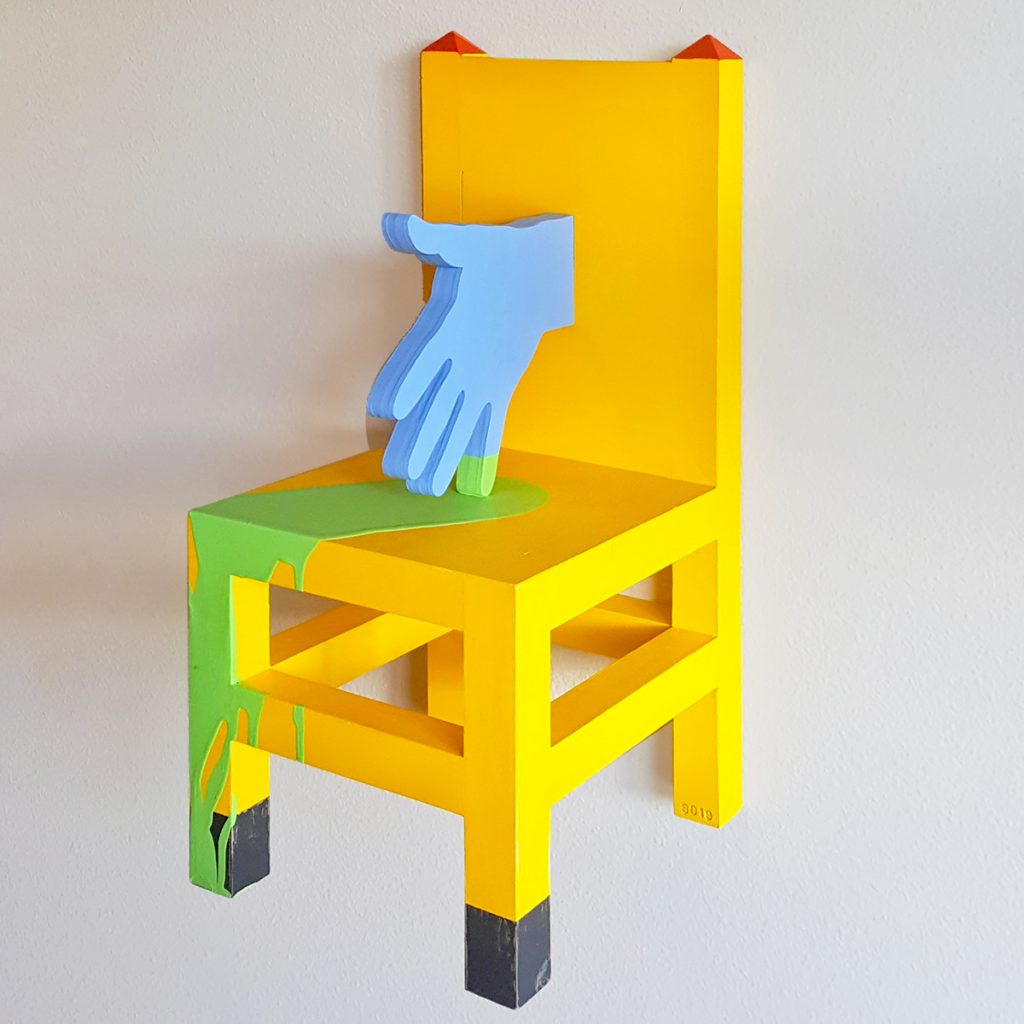 A couple you’ll just have to use your imagination on: “The Broken Fish Always Show Up When A Breakfast Of Burnt Toast Is Served,” or, “It Was Only Temporary When The Bone Of Contention Exhibit Was Suddenly Turned Upside Down.”

So, after completing all that higher education, while working in the graphic design field in Sacramento, Dayton began busying himself seriously in fine art, creating serigraph prints and his first box assemblages. In 1989, he moved (with his family) to West Jordan. Since settling in Utah, we are told in his bio, “he has taught himself to weave; make baskets; play several musical instruments (which led to performing in a folk group); and bake artisan bread. He has had opportunities to create several public art works, including two temporary sculptures for Flying Objects 2.0 and 4.0.”

In “Sailor Sunny Jim the Sleeping Puppet Bus Rider puts together a FAQ,” a textual piece that functions as a sort of artist statement, Dayton reveals far more than we suspect he would to a journalist, so we didn’t bother to call him. Instead, we learn from the chat with one of the characters in his work that his best ideas “just pop into my head” in the shower or while trying to go to sleep at night or driving to work – he’s just a typical artist. He even works with the usual stuff including discarded plastic gift cards, Frog tape and cheap brushes, he admits. He gets his materials “mostly from hardware stores and DIY centers. Sometimes I use found stuff like old wire, rusty bottle caps, and discarded bits of wood.” And he also gets tired of doing the same kind of art that everyone expects him to do. 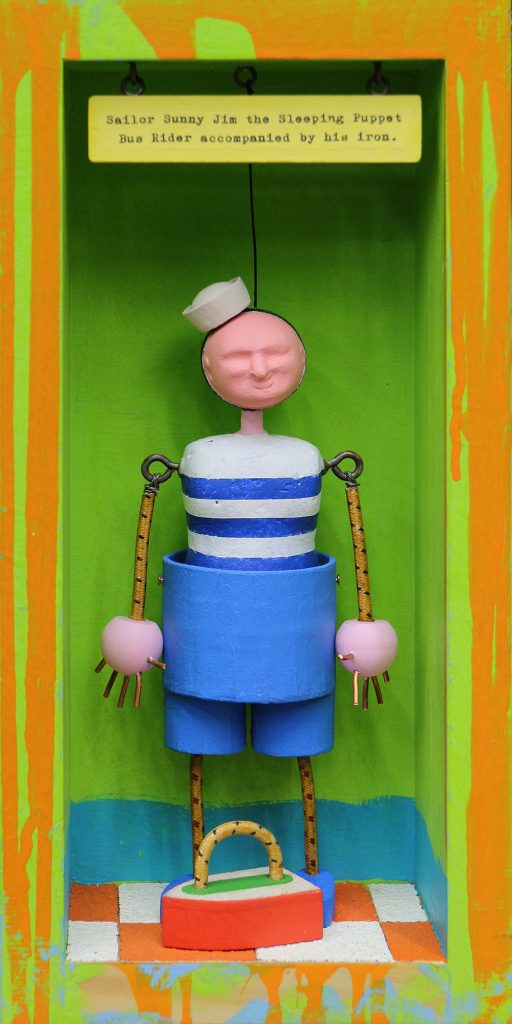 Asked by Sailor Sunny Jim what artists have influenced him, Dayton replies: “Jackson Pollock, Jasper Johns, Roy Lichtenstein, Richard Diebenkorn, Charles Arnoldi, and Wayne Thiebaud, to name a few. James Taylor and Dave Brubeck are nice to listen to while I’m working.” (Which would have been this writer’s next question. Always good to know who they listen to.)

Finally, THE MOST IMPORTANT QUESTION: What does your art mean?

Dayton : “Don’t try too hard to figure out meaning behind my work because mostly there is no meaning to them. Let’s call them absurd realities. I like to take real subjects and put them in absurd situations. I’m just trying to get someone to smile.” Lovely. 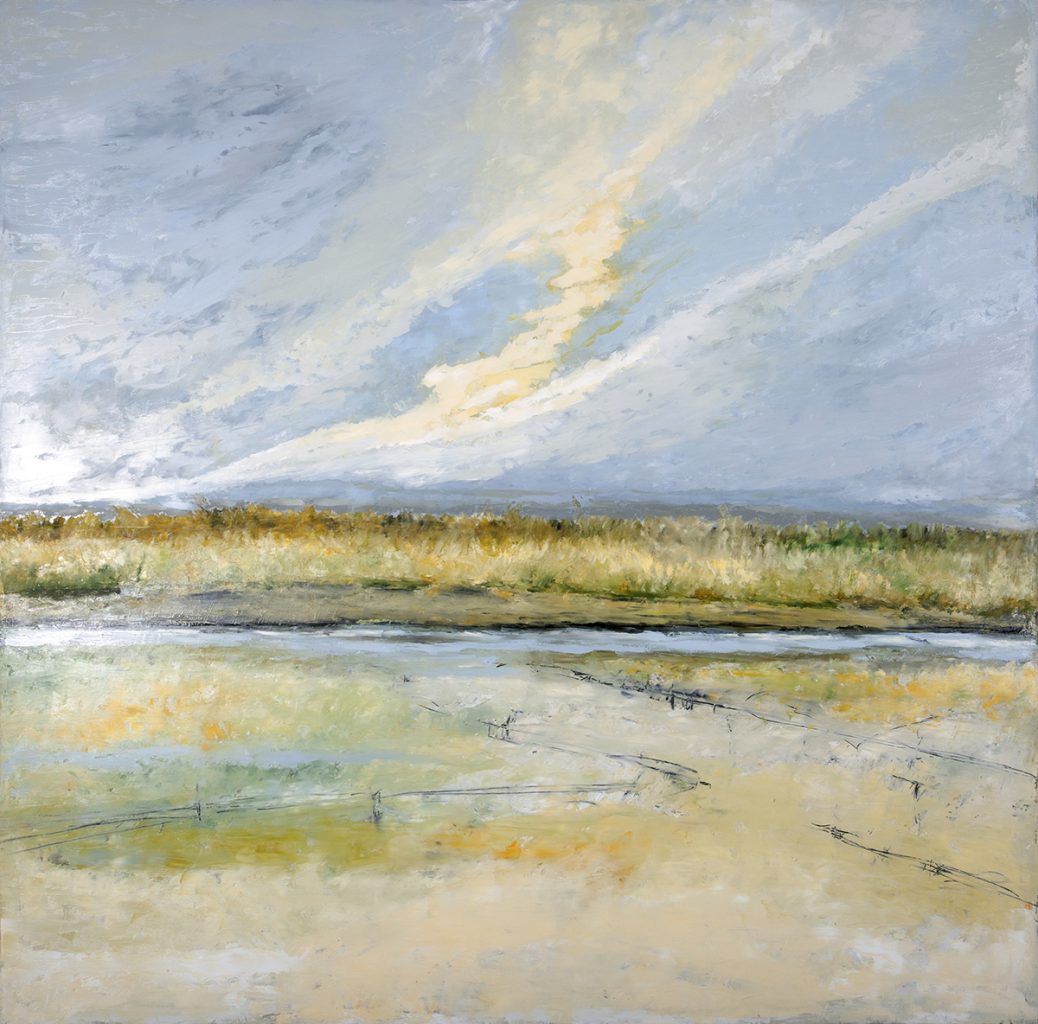 Showing in the Main Gallery concurrently with Steve Dayton is the enticing work of Tom Bettin. In addition to his complex images that use monotype as a base, Bettin is showing several oil paintings. The artist, who earned a BFA at the University of Utah and attended painting and printing master’s workshops in Santa Fe between 1985-2000, recently retired from teaching Visual Art at Judge Memorial High School.

For a discussion about his work, we turn to Ehren Clark, a longtime critic for 15 Bytes until his untimely death in 2017. He discusses Bettin with reference to a show at Phillips in 2013:

“It might be easiest to call Tom Bettin a painter, but his studio practice is just as dependent on printmaking, sophisticated forms of collage and other multimedia approaches, making it difficult to define just ‘what kind of art’ Bettin makes.  Whatever the mechanics, it is art that transcends rules and defies boundaries, while managing to create pure and evocative manifestations of the beautiful…

… Bettin uses a monoprint process, in which the artist creates a series of unique images on a printing plate, and transfers them, through the press, to paper. He describes his time in the studio as ‘almost like a Zen process. I will be working on my print and I have to be able to not react, but act. If you are reacting, it’s too late.”’ 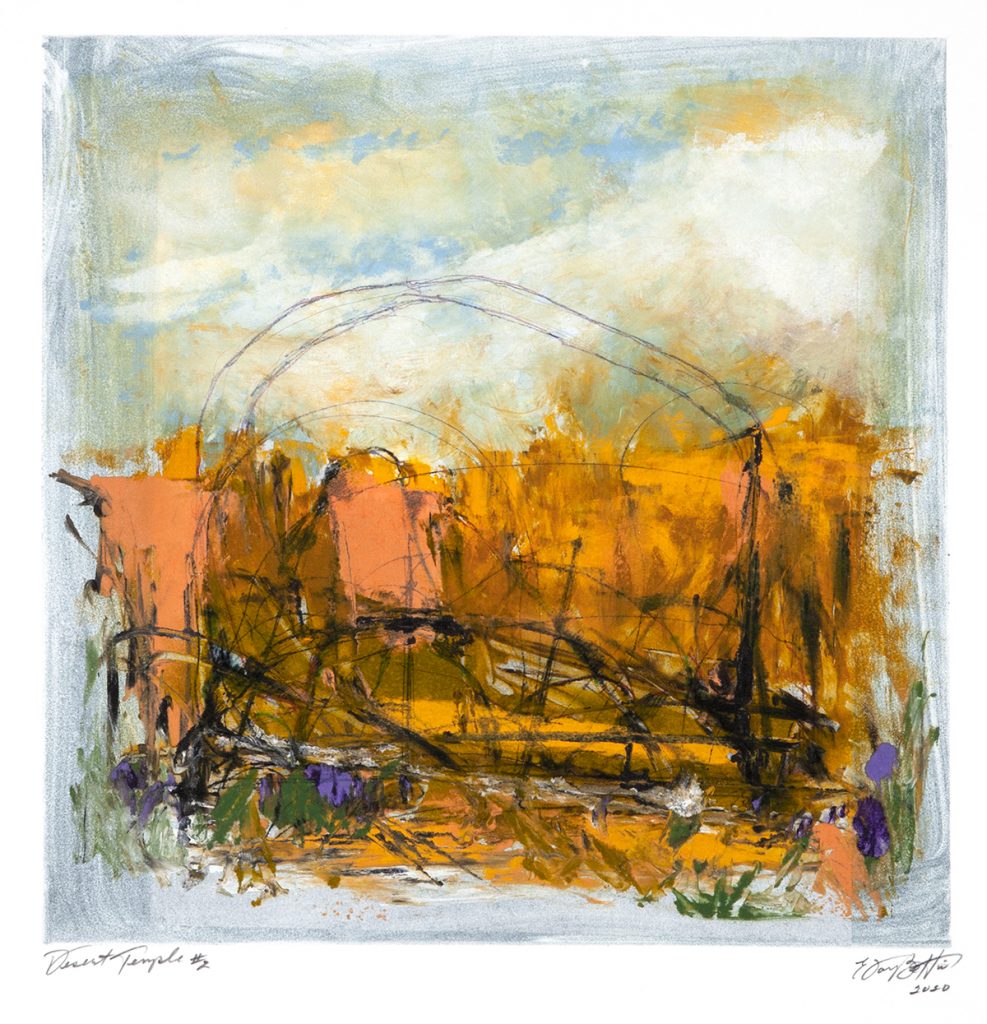 Lawrence nearly matches Dayton in whimsy as she embeds found metal — preferably rusty, bent, imperfect objects that tell a story — into wax to create her encaustic works. “In my planning, there are often one or two special pieces of metal that become the muse for a particular artwork,” says Lawrence. “For me, the objects evoke a feeling … making each piece one of a kind. I want the viewer to relate to each piece in their own way, either by knowing what some or all the metal pieces are and what they were originally used for, or by seeing how I’ve been able to bring together many unusual textures and creating a still life or landscape that they can enjoy.”

Throughout her childhood Lawrence always had art materials at hand, supplied by her parents and teachers. She took a watercolor class at Petersen Art Center for a few years as an adult, developed her painting and drawing skills and entered a few watercolor paintings in the Utah State Fair. After receiving ribbons for her work each time, she says her husband gave her the push she needed by enrolling her at Salt Lake Community College to pursue the beginnings of an art degree. The artist ultimately graduated Magna Cum Laude from the University of Utah in 2017, earning a BFA with a painting and drawing emphasis. Lawrence resides in Bountiful, but her artwork stems from her memories of growing up in Salt Lake City, travels, and a love of nature. 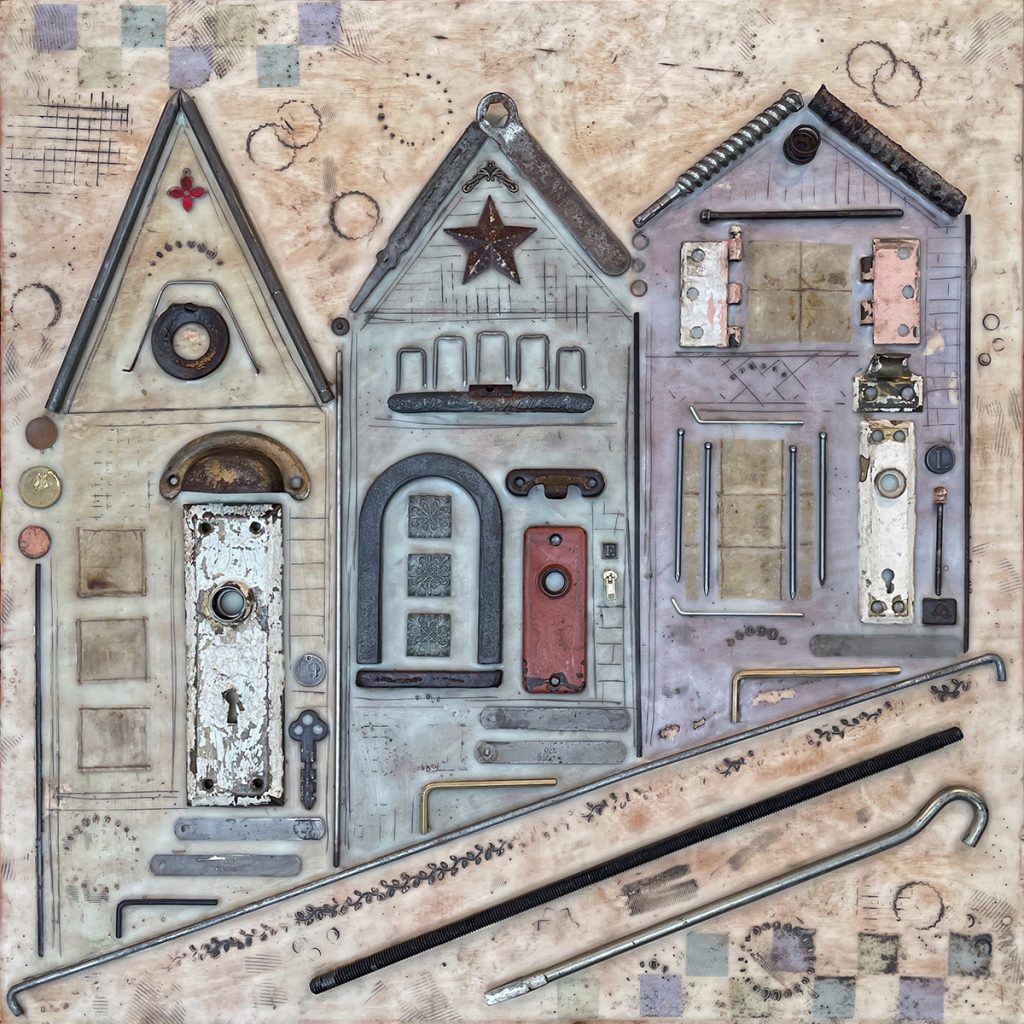