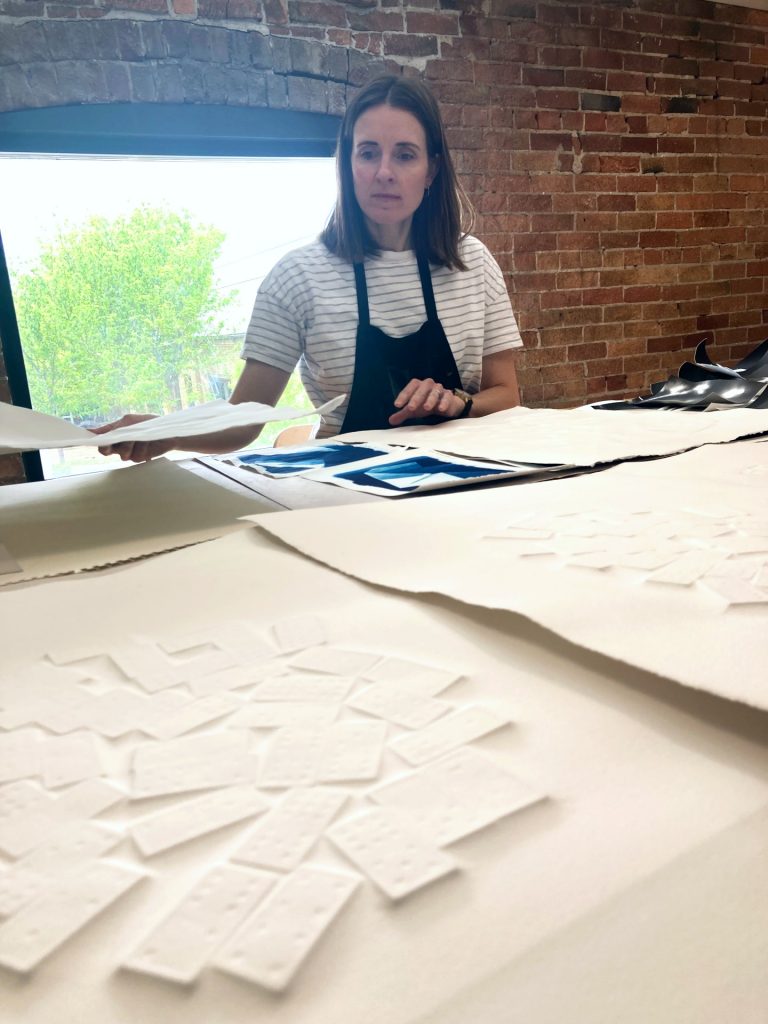 Surrounded by the worn brick of the former Bogue Foundry, Emily Hawkins sorts through test prints as part of her residency at Modern West.

Emily Hawkins is rummaging around the flat files at Salt Lake City’s Saltgrass Printmakers. She’s looking for sheets of Mylar. “That’s too thick,” Saltgrass director Stefanie Dykes tells her, though she’s not quite sure what Hawkins is looking for. “We use that one for printing,” she says when Hawkins pulls out a different sheet. It takes a few minutes before the two understand each other: Hawkins is looking for a thin sheet of Mylar she can fold into paper — or, in this case, mylar — airplanes. It’s a matter of transparency: she’s looking to see what X-ray like image she can create, whether as a cyanotype or silver gelatin print, of the paper airplanes her boys have been making.

Technically, Hawkins is working next door, upstairs at Modern West, as one of their artists-in-residence. The gallery hosts two artists at a time for two-month residencies (Colour Maisch is working in the second space). But Hawkins has been making frequent forays to Saltgrass, where she has been running an assortment of children’s toys through the presses as relief prints: Legos, dominoes, magnet letters, bullets from Nerf guns — “My boys have been playing with Nerf guns a lot,” she says.

Hawkins has four children, two boys and two girls, the youngest just starting school and the oldest about to enter High School.  And as the family enters the stage when (hopefully) small toys will no longer be littered throughout the house, Hawkins is making work about what’s about to be left behind. “It’s the paradox of wanting [the kids] close by but wanting them to leave. Wanting to preserve that moment but wanting it to be over… these are like the remnants of those moments.”

She’s been coming to Modern West three or four times a week, during school hours, commuting from the home in Lehi the family moved into a few months ago. “It’s great because I can step away from my domestic duties and my four kids and just have some space away.”

She’s interested in the act of play as play, when there is no objective, when things are created, demolished, left as ruins, in a continual, ephemeral loop. Principally a lens-based artist, Hawkins’ time at Modern West is its own form of play and experimentation. “I’m still figuring out what I want to say with this work.” 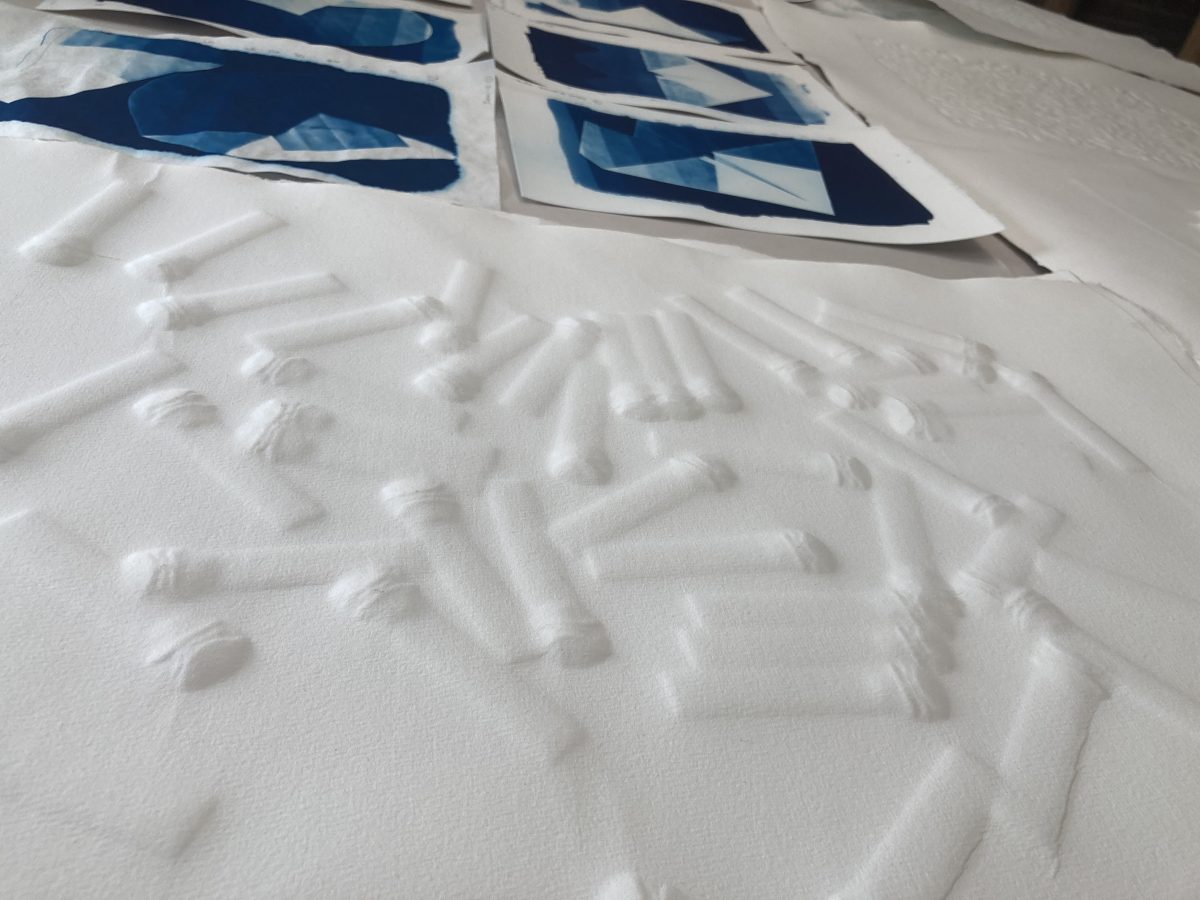 The tips of Nerf gun bullets, seen in this test print, proved unsatisfactory for Hawkins

She didn’t like the rubber tipped heads of the Nerf gun bullets — they were breaking the paper when it went through the press — so she has removed them, leaving simple rectangles. “I like taking the visual clutter of toys and reversing that into this quiet, controlled chaos,” she says. The relief prints, on white paper, look like footprints left in a plush carpet. As she looks through her test prints, and the cyanotypes she has made of paper airplanes, she also rummages through her mental space and finds a term for what she is creating: memorials. Memorials of the fleeting experience of childhood — or, and the works seem to be just as much about this (if not more) … of parenthood. 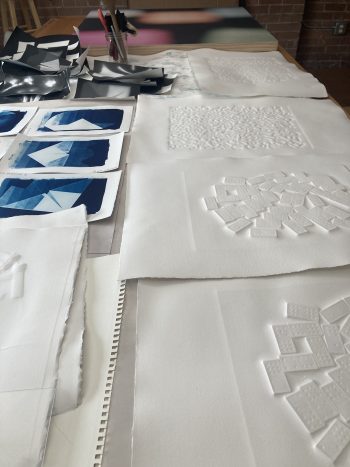 A table at Modern West shows a variety of Hawkins methods for memorializing childhood included, from top, a finished work from her Friday Papers Series, silver gelatin prints, cyanotypes of paper airplanes and relief prints of childhood toys.

Hawkins grew up on Salt Lake City’s east side. She and her husband moved to Spokane, Washington 15 years ago, where they began raising their family and he practiced real estate law. A year ago, joining the Great Resignation, he turned his back on that career. The family moved back to Utah and he began teaching High School English. When school’s out, and he’s at home more, Hawkins will have even more time to come to Modern West.

As part of the residency, Modern West exhibits 10 previous works from the artists-in-residence. The gallery has chosen a group of work from Hawkins’ Friday Paper Series — the colored papers kids bring home from school at the end of the week, which Hawkins has collaged and photographed, out of focus, creating another type of memorial, for another stage of childhood/parenthood. You may have seen Hawkins lens-based work at the Certain Women exhibit last fall, and a work from her Matriarch Diptych series was juried into the Bountiful Davis Art Center’s Statewide Annual.