As American as Apple Pie: Amy Jorgensen’s Far From the Tree 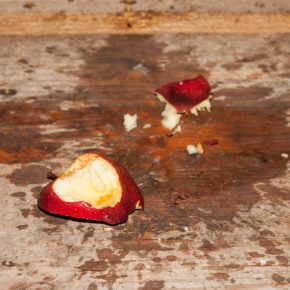 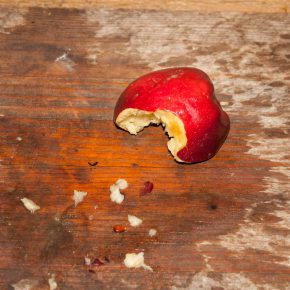 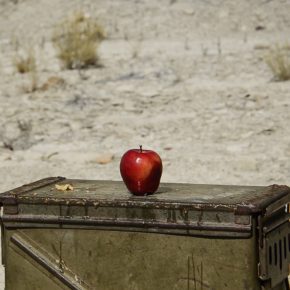 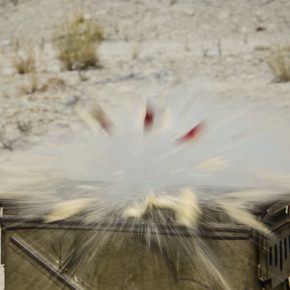 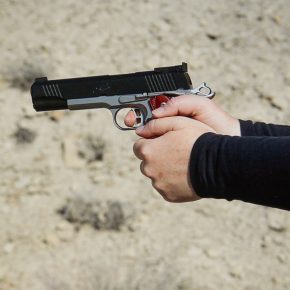 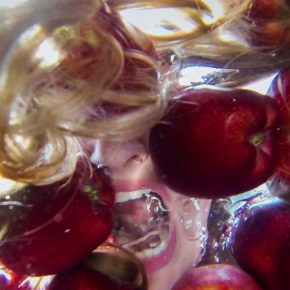 When you stop by the visitor’s desk at Utah Museum of Contemporary Art, you’ll see a large glass bowl, placed there by curator Becca Maksym, topped full with apples. Red. Shiny. Delicious. The kind that greet you in hotel lobbies. As a fruit, it’s a sentinel of welcome, of home. In fact, the apple has long stood as a symbol of wholesomeness and autumn harvest, echoing the rich goldenness of October afternoons. Within our cultural landscape, it functions symbolically outside the largesse of its obvious purpose. It is the hope of a new school year, a token of appreciation. The apple often stands in for the big and bold myths of American goodness, a land of freedom, milk and honey, filled with amber waves of grain.

Fitting for an October opening then is Amy Jorgensen’s exhibition Far From the Tree, which takes on the loaded icon of the apple in three distinct artworks—all rooted in performance art, two video, one photographic—that deconstruct the fruit both literally and symbolically. Describing the collective project, Jorgensen says that each work “examines the arching theme of the apple as a loaded and sometimes contradictory cultural symbol.” Further, she explains that “all the works in the show make some reference to the political landscape of terrorism and torture.” A topic, according to Jorgensen, that has saturated our collective public imagination. By doing so, her work inverts the perceived wholesomeness of apple imagery, and its extended implication of American goodness, within the framework of a political critique. Within this context, the fruit (and nation) becomes vilified when paired within the landscape of post-9/11 America.

“Far From the Tree” is a video performance of the artist unsuccessfully bobbing for apples. Shot from underwater with audio, the viewer watches Jorgensen struggle, drowning, desperately searching for the desired fruit. Her hair floats eerily outward, filling the frame. She struggles back and forth, fluttering about, failing. The exercise is futile; the apple is never attained. Mirroring documentation of waterboarding, the seemingly playful reference to the childhood party game feels terrifying from this perspective. And as a viewer, one is left as the voyeur, watching without an ability to assist. Therefore, it is a metaphor for other, similar, yet more horrific images, of American torture. Such images can be difficult to see because they debunk the notion of American exceptionalism. They demystify America, a nation fallen from the tree.

Thirty photographs of rotten, smashed and otherwise discarded apples fill the east wall of the gallery. “An Apple a Day” depicts a month’s worth of Jorgensen following the idiom, “an apple a day, keeps the doctor away.” Each day, an apple was partially eaten—sometimes a tiny little bite; sometimes almost consumed to the core—then discarded onto a stained floor and hit by a sledge hammer. According to Maksym, the images were “shot in a way to suggest decay, repulsion and unsanitary conditions.” Jorgensen herself repeated this concept in an interview, when she compared the images to the dank darkness of a prison cell. Thus, the collective imagery deconstructs ubiquitous depictions of apples as icons of health, happiness and optimism. The reference to a prison cell draws a likely comparison to sites like Guantanamo Bay and highlights the poor conditions and treatment of suspected terrorists.

The final work in the gallery is a four-channel video called “Apple of my Eye,” which consists of two frames of a single apple being blown to pieces and two channels of Jorgensen target shooting with with a .45 Sig Sauer P220 on one screen and a .45 Kimber Match II in the other. From the audio, one can hear the sound of bullets and apples falling to the ground, set in a nondescript desert landscape. It is disarming repeatedly to see a close-cropped gun being fired with apple flesh falling to the floor. While historically the image makes reference to Dr. Harold Edgerton, an MIT professor who first developed cameras fast enough to capture bullets shooting through apples in slow motion, such sharp shooting again seems to be a visual nod to the proliferation of gun violence here in America as well as the violence of American military involvement.

As an exhibition, Far From the Tree recodes the apple from its polished frame set cozily within notions of Americana and replaces it within the framework of American aggression, violence and torture. Duplicitous realities often exist simultaneously. But what are we to do with Jorgensen’s recoding of our own story through the metaphor of the apple? Perhaps they are moralizing, designed to elicit sympathy, designed to critique. Said Susan Sontag, in Regarding the Pain of Others, “So far as we feel sympathy, we feel we are not accomplices to what caused the suffering. Our sympathy proclaims our innocence as well as our impotence. . . [Yet], compassion is an unstable emotion. It needs to be translated into action, or it withers.” Withers, yes, especially within this content when such criticism are coded in the poetics of aesthetics. As viewers, the question remains, where do we go from here? What action are we to take?

Perhaps we are left with our own impotence in the face of such horrors and, of course, with a delicious red apple as we exit.

Far From the Tree, featuring new work by Amy Jorgensen is at the Utah Museum of Contemporary Art in Salt Lake City through December 6.