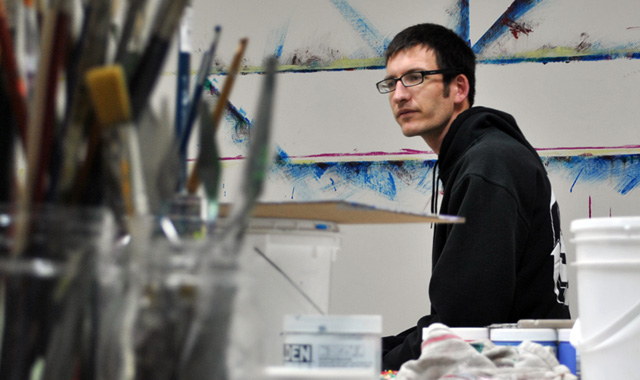 “My paintings come out of my love/hate relationship with Modernism,” says Utah artist Steven Stradley. “Modernism pigeon-holed itself, I think. [Clement] Greenberg pigeon-holed it as he had all of those ideas about painting as a flat surface, ideas about painting super-imposed upon the work that maybe did not involve the work itself.” Stradley is in his St. George studio, where he is preparing for an upcoming exhibit at CUAC in Salt Lake City. Close up, what Stradley is working on seems to come out of a Greenbergian handbook: stripes of flat color, one next to the other. Pull back, though, and you see that Stradley is painting this on a long narrow panel that spans two walls, a hint at the type of expansive Modernism Stradley is exploring in his current work.

“My paintings come out of my love/hate relationship with Modernism,” says artist Steven Stradley. “Modernism pigeon-holed itself, I think. [Clement] Greenberg pigeon-holed it as he had all of those ideas about painting as a flat surface, ideas about painting super-imposed upon the work that maybe did not involve the work itself.” Stradley is in his St. George studio, where he is preparing for an upcoming exhibit at CUAC in Salt Lake City. Close up, what Stradley is working on seems to come out of a Greenbergian handbook: stripes of flat color, one laid next to the other. Pull back, though, and you see that Stradley is painting this on a long narrow panel that spans two walls, a hint at the type of expansive Modernism Stradley is exploring in his current work.

A Utah native, Stradley did his undergraduate work at Utah State University, studying with Chris Terry, Jane Catlin, Woody Shepherd and Koichi Yamamoto.  After graduating in 2006, he moved to Salt Lake City, where he threw himself into the local scene. He held monthly critique sessions at his home, an opportunity to continue the group camaraderie and theoretical discussions he enjoyed in school, and he was involved in a couple dozen shows in just a few years.

“As a painter, earlier on, I was interested in how to take painting from just an image on canvas and think of it as a painterly installation,” he says of some of these first exhibitions. For the 2008 State Street Project, he created a 434-panel piece of mixed media works, “about the experience of ubiquity in travel, for example contradictory states of stimulation and monotony while on the road.”|2|  In Systemic Profiles, an exhibit he curated in 2009 and that featured himself, Randy Marsh, Barbara Frasier and Carrie Wardle, he was interested in how 2-D mediums could transcend their traditional flat mode to engage in a site-specific, fully enclosed installation space (see our review in the December 2009 edition of 15 Bytes). Elements of Stradley’s paintings—cellular forms connected by straight lines—emerged from the paintings to become free-hanging sculptures that filled the space between the paintings.|3|

For the past three years, Stradley has been at graduate school at Michigan State University, a period in which he says he “came back to the idea of painting as the core.” He became interested in the collision between Greenberg’s idea of Modernism and what was actually happening with the artists of the time. “There was a bubble there that popped,” he says, “and out of that you have people who start to explore that rupture.”

Stradley’s recent work explores that rupture with a slightly askance view.  “Normally, in talking about Modernism, you have a more structured idea of Modernism being about the universal, about the total image,” he says. “And this actually becomes a really heroic thing when you see Pollock or a Newman or a Rothko, even an early Rauschenberg, and it’s all about the heroic nature of painting.” By contrast, Stradley paints around corners and edges and baseboards of a given space, making himself a sort of anti-hero, one whose work does not dominate and overwhelm a space, but investigates its structure, shining light into the corners. What Stradley does is nothing like a beginning heading towards an end, but a Modernist-like consideration of the space given, and an application of structure to comply with that space with the greatest utility. In the process, Stradley creates a frame-like flow of line comprised of color, pattern, texture and abstract form that pays much attention to the periphery, that skeletal space that exists between joints, and, also, beyond the painted structure and into the wall space, set off by a painted peripheral border, itself becoming a work of art.  The room thusly becomes a fully embodied painting in the literal sense.

Stradley describes his painting process as organic, as an exploration. “I paint right on the wall,” he says. “I get more information in the painting process than I do the painting itself.” In the work he is creating for CUAC, he aims to draw attention to the architecture of the space by the placement of his painting. “If I can just think of the periphery of the space and pay attention to this space we don’t normally focus on, and there is a painting there, than all of a sudden the architecture is heightened, the sense of being in that space and a sense of what that painting is doing and the sense of being of that painting.”

His primary structures formatted within the periphery generate meaning and give equal measure of meaning to the space of interior periphery. The peripheries of the sites for his installations capture his attention and become his subjective vantage point. This attention to the ignored, the cast off, is not new to Stradley, who used to incorporate small found objects in his work for interest and texture. “The literal structure of the painting is realized in the periphery because here is the optimal space, this painting wraps the space,” he says. “It gives the idea of conforming to the architecture and gauging the architectural space as a site specific piece, and at this point, it comes from the idea of installation.”

Many of Stradley’s fragments look and function like a Tetris game, and one recognizes change when a piece shoots out, or by the voids created when pieces are conspicuously left out. “There is structure in meaning, not just formal structure, but taking formal structure and also things that have meaning or context,” says the artist. There is play in form and meaning but the literality should be within the artist’s sphere of reference, limited to a few choice, impassioned subjects: these might be conditions of societal freedoms, art-related phenomena, self-perpetuating form, the idea of narrative and temporality, or the absolute or arbitrariness of structure itself. These meanings are translated into his work, assuming multiple layers of compositional form compounded with universal meanings implied by the form; thus the narrative is never definite but one that can build and rebuild moment to moment, fragment to fragment—a self-perpetuating narrative.

Stradley’s levels of meaning work with the physicality of his forms: for example, a turn in a corner and a transfer of large rectangular structure to a more delicate and fragile network of line might indicate a paradigm shift from objective abstraction to the reality of subjective abstraction, this made more articulate as the first has a distinct color composition that gives way to another equally distinct composition—the possibilities for play and exploration become exciting and limitless. Stradley’s works act both as a frame for the space they inhabit and as a work in itself; they lead the viewer in a visual journey full of possible narratives.

Stradley’s own narrative brought him back to Utah this year. After applying for numerous jobs across the country, he took one at the Tuacahn High School for Performing Arts in St. George. He says he finds it ironic to be back here in Utah, but he’s enjoying it. “It is nice to be closer to home and again engage in the art scene that I love while attempting to bring a greater contemporary perspective to St. George,” he says. And he enjoys teaching, something that brings him back to his own college days, and those critique sessions held at his Salt Lake home. “I find that teaching intrinsically ties in with the creative process I deal with on a daily basis.  It ultimately fuels my studio process to discuss art ideas with students and engage in their creativity.”

That studio practice is very active this month as this dedicated artist and teacher prepares for his CUAC exhibit. It should provide ample evidence that painting is the ruling force in his art and be a reflection of a penetrating mind that thinks deeply and broadly, exploring the fresh illumination that occurs in the periphery. Steven Stradley: Peripheries opens at CUAC in Salt Lake City on January 17, 6-9 pm. The exhibit continues through March 15. You can view more of the artist’s work at stevenstradley.com.