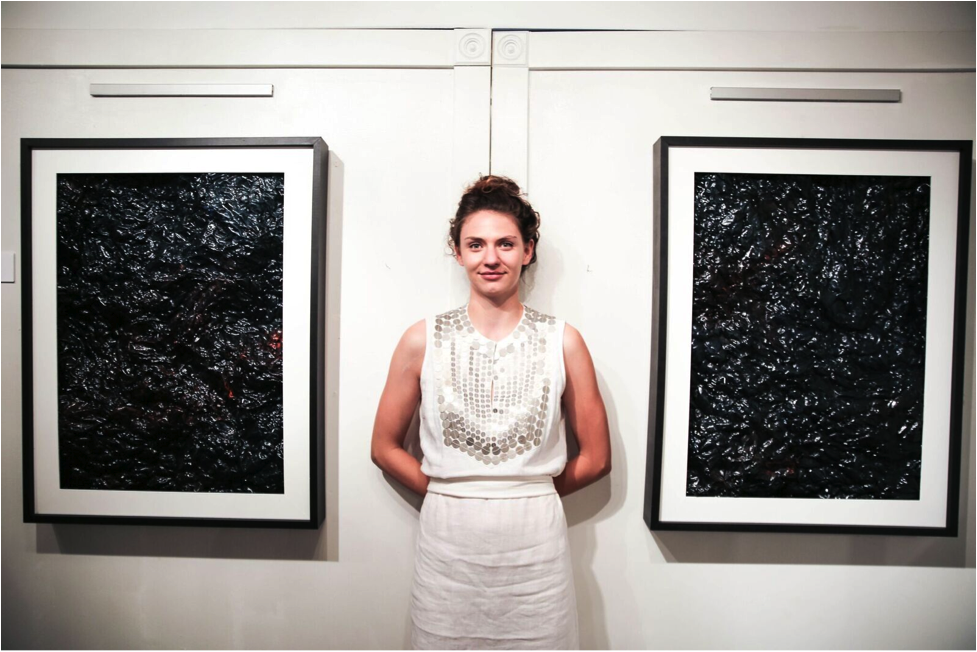 At Salt Lake’s September Gallery Stroll, Mestizo Institute of Culture and Arts | MICA opened Ali Mitchell’s Oil Fields, a multimedia exhibition evoking industrial landscapes as cultural artifacts as a means to explore complex systems of social, political, and economic production. 15 Bytes tracked down the recent University of Utah graduate for a conversation about art, oil and the possibility for change.

15B: For this exhibit, you have three groupings of work — two-dimensional paintings, three-dimensional wall hangings, and found photographs. Could you describe how you came to work in each of these mediums and why you chose to group them together in this exhibit.

AM: The goal of the exhibition was to make objects that visualize, document and bring closer the global ecological crisis. I chose the three separate mediums to give a variety of size as well as a zooming in and out effect. One can see this in the Google satellite imagery, starting at the scale of looking down on the inner workings of a nearby oil refiner, then zoomed out to a perspective of Earth from space.

The satellite images are not totally photographic, but are 3-D-rendered models stitched together from multiple photographic sources. They were extremely interesting to me, as I find all of my reference imagery for my paintings in Google satellite mapping and imagery. Their scale is intimate and the tone documentative, asking the viewer to look closer and to investigate the images for themselves, whereas the Oil Pieces are extremely tactile and are formatted roughly similar to a mirror. Their surface changes as one walks around them, and I’ve noticed an urge for people to reach out and touch them. They are the most abstracted pieces in the show, and they exist to create an immediate relationship between the viewer and the liquid, black substance. The paintings are a daunting size compared to the viewer. They are meant to be instantly visually arresting and to draw in a viewer’s attention to the smaller works. “BP” and “Amazon” are both aerial images orienting the point of view in the sky looking down on the landscape from an omniscient point of view. 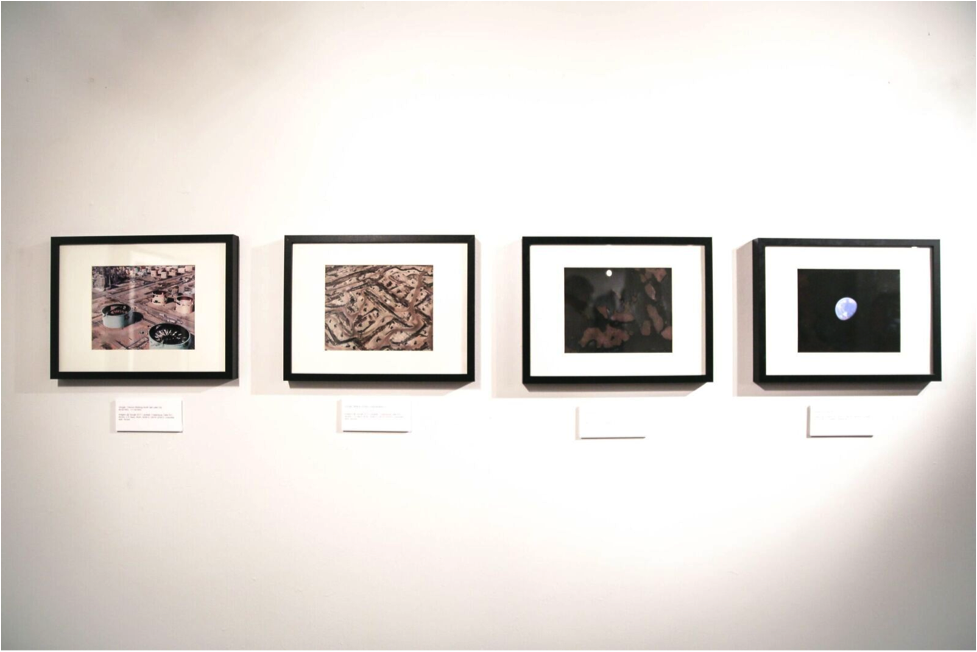 15B: You studied art history while at college. Do you think someone who has immersed herself in history/theory has a different practice than someone who has been primarily a studio artist.

AM: To me, art practice, theory and history are inextricably connected. I double-majored in Painting and Drawing and Art History because I really don’t fully fit into either subject and I couldn’t choose between the two disciplines.

The Oil Fields exhibition started within a project I’ve been working on throughout my undergrad career titled “Art, Ecology and the Politics of Land Use” that was both a research project, investigating the relationship between culture, land use and ecological crisis, as well as a body of artwork featuring maps, photographs, satellite imagery and paintings. I had to do extracurricular study grants to do the work I really wanted to. But, what I know of the actual art world is that most of my favorite artists (Tacita Dean, Trevor Paglen) create images by researching the histories and stories behind a site of interest and pulling out the beautiful visual moments from those stories.

I also believe that a piece of art becomes more important to us when we use it as a tool of self-reflection. So, for me, paintings must be more than surface deep, and I find my vision for paintings by researching instances of ecological crisis or by finding traces of memory or histories in a site that I visit. To me, the most intricate and engaging cultural object is the landscape because it’s made through a process of collective mark making, which can capture an unbelievably complicated system of social, political, and economic production, and which could be studied like an artifact or a painting to understand how and why we do what we do. My challenge is finding a way to unravel those stories in visually interesting ways. 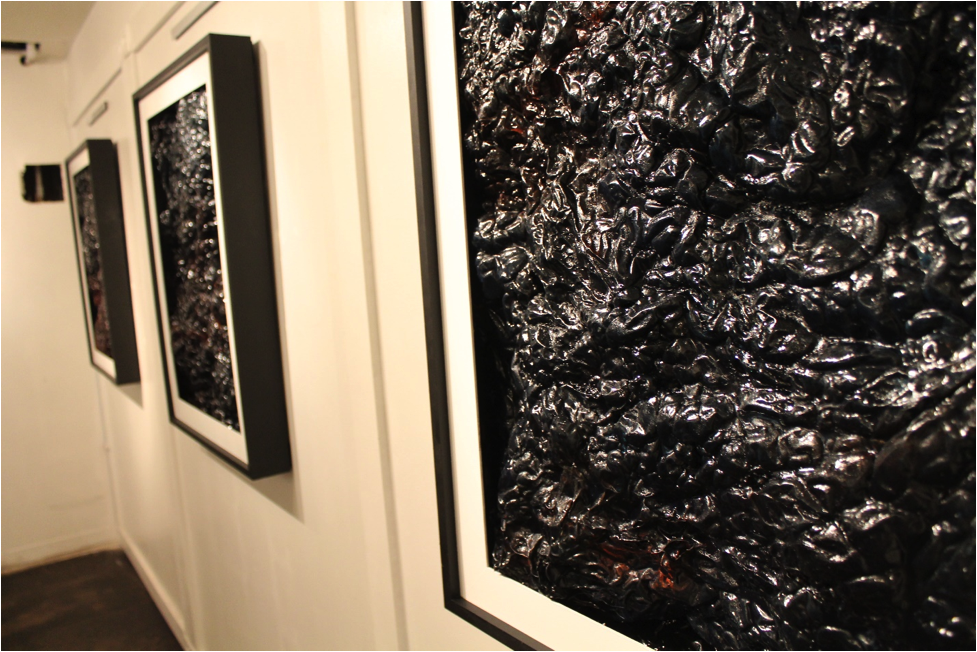 15B: Do you wrestle with the contradiction of making beautiful objects about awful things? Edward Burtynsky comes to mind: he makes images of industrial wastelands, but they are so aesthetically pleasing one can imagine an oil company CEO hanging them in his office.

AM: It’s a very thin line to walk. I’ve looked at a lot of artwork by Edward Burtynsky, as well as similar artists. They do a very good job of keeping a documentative, unbiased tone and letting the images speak for themselves as they display scale, and create this sense of awe by just looking in at something awesome. I really have tried to learn from that as I was thinking about the images that I was making but because they are paintings they really are less objective. I mostly have been looking to old landscape painters like Caspar David Friedrich to think about how the landscape can have this ghostly voice. His landscapes have this power about them, and darkness, he gives them personalities and forcefulness. I wanted my paintings to call out to people so they had to be beautiful, but in some ways I know that they are equally violent and scary to some people, especially the oil fields pieces. That bridge is super compelling to me, and something that I wanted to pull out of the history of landscape painting that I’ve always really enjoyed. 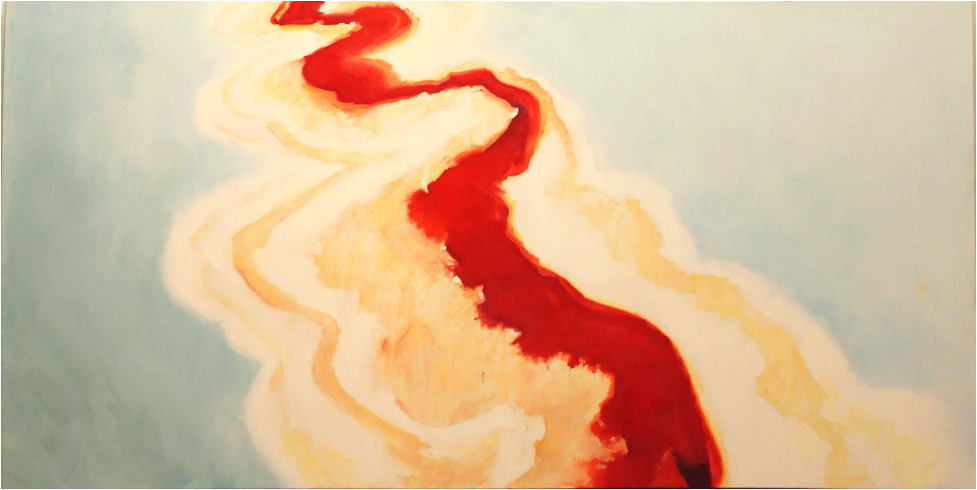 15B: You’ve framed your exhibit at Mestizo in terms of impending ecological disaster and our addiction to fossil fuels. In what way, and to what extent do you think the visual arts can create the type of political change necessary to avoid this disaster?

AM: My goal when putting this together was to build a space where people from all different stations and values could come together to discuss these issues. Salt Lake City is about to endure another winter with some of the worst air quality on Earth and it’s extremely frustrating for me because we know what the problem is, we know how to solve it, we have the technology to solve it, and yet nothing changes. We still choose to live in literally poison air. To me that represents a crisis of thought and a great failure of our collective value system.

To me artwork and cultural research can enlighten how and why we do things. They illuminate the cultural aspect of the problem and the need for social change towards sustainability. The question I’m interested in is how we create value or feel existential threat on issues beyond our immediate perception; issues that are extremely large, intangible and most often literally invisible. Art is exciting to me in that it has the unique ability to visualize the invisible, to make tangible the intangible and to create value where there was none.

To me, this particular show is approachable in its ambiguity. I wanted to invite people who might not be familiar with these crises or who feel that climate change is a controversial topic to a space where they don’t feel alienated. At the same time, all the work in the show has undertones of intense violence in its visual quality that I hoped would inspire conversations and feelings about the truthfully massive extent of the crisis we face.

Tagged as: Ali Mitchell, Mestizo Institute of Culture and Arts