Art . . . Off the Grid: Avenues Open Studios in its 2nd Year 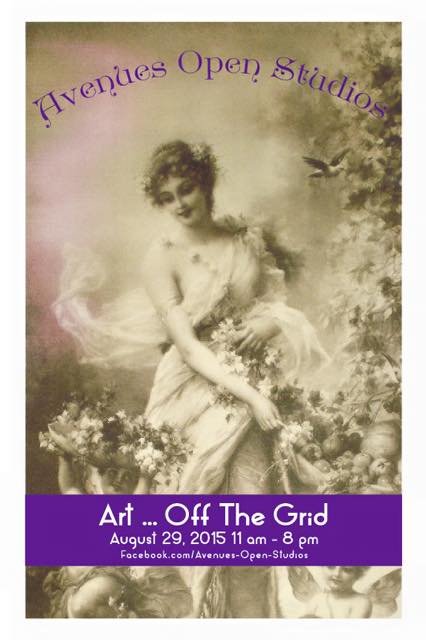 Now in its second year, the Avenues Open Studios is an event that almost wasn’t.

Artist Anne Albaugh originally pitched the idea to showcase the large number of artists in Salt Lake City’s Avenues neighborhood by holding an open studio event in August 2014. Her idea generated interest among her neighboring artists, but then Albaugh became busy with her own show at 15th Street Gallery that summer and decided to cancel. Four of the artists slated to participate — Patrice Corneli, Darin Jones, Joan Cowles and Lori Berryhill — hated to see a good idea go to waste and so immediately organized a meeting to see if they could go ahead with the event.   “We contacted as many artists as we could and in the end had commitments from fourteen,” says Corneli.

Corneli designed brochures and yard sign, which the group delivered to local businesses. “Kathie Chadbourne at Avenues Bistro on Third was a great champion of the event putting brochures on every table the week before the event,” Corneli says.

The event was so fun and well attended the group decided to hold it again in 2015 — with double the artists. Albaugh is in this year (as are Corneli, Jones and Cowles) and helped design the brochure (managing to fit 30 plus artists). Many of the artists, like Albaugh and Pilar Pobil, have studios in their home, which makes it easy to display their work, but others get more inventive. Corneli says she has a very small, upstairs studio, but a big porch. So she displays her art on the porch, also working on new pieces between visitors.

Theoretically, to participate in the event one must either live in the Avenues or have a studio there or both. But this year there are a couple of exceptions, artists who have been invited by neighborhood art enthusiasts to show at their homes. In addition to the private studios, Alice Gallery, Avenues Bistro on Third, Hatch Family Chocolates, and Cucina will be showcasing art.

Art . . . Off The Grid, the Avenues Open Studio event, happens Saturday, August 29th, 11 am – 8 pm. You can start at any location and pick up a map. To learn more visit the group’s Facebook page.