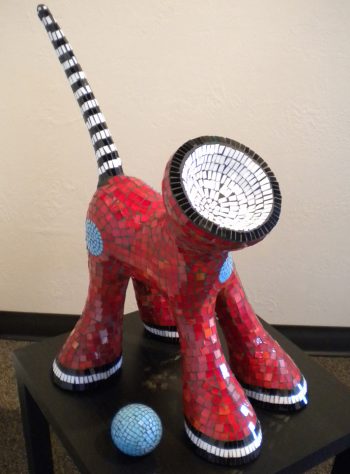 The Art of Obsession, a duet for gallery by sculptor Julie Lucus and painter Jeannie Hatch, will have closed by the time this review goes to pixels, though according to director Scott Waters some of the sculptures will remain in the Sugarhouse Gallery during the next month’s show of photographs by Greg Sumner.

If the twentieth century’s flirtation with “mere crafts” as fine arts is over, the word hasn’t reached Julie Lucus, possibly because living in the West has allowed her not only to see assemblage and other demotic expressive forms, but freed her from the need to stick close to the mainstream in hopes of leap-frogging whoever’s up front into the history books. So she re-fashions witty, satirical comments on current events from found objects, often covered with mosaics. Some, like “Play,” a dog whose head is modified to do one thing—catch the ball—are exquisitely crafted, while others, like “WMD–Wallaby of Mass Destruction,” may prove as ephemeral as we hope their subjects do. It’s not a problem, though, any more than it matters that the responses they re-present aren’t particularly deep or original. What’s important is that they give direct visible and risible form to feelings that precede words and sentences.

Jeannie Hatch’s paintings hang well with Lucus’s shaggy dog sculptures, not least because they display as many varieties of medium and style. While she occasionally renders a subject in the round, her typical mode owes more to cubism and the graphic breakthroughs of Toulouse-Lautrec—with a twist. “Rapture,” with its balance between anatomy and design, signals a role for voyeurism with its focal eye. Something far more complex goes on in “Heartless Trinity,” in which three circles make three heads but one face, while a second face doubles as a hole where a heart should be, and three falling drops could be tears or something more seminal. Given the ambivalent but clearly present sexuality—a welcome treat after having to contemplate too many sacramental indulgences—the possibility of more sophisticated stories cannot be overlooked. He wants her, but so does she. 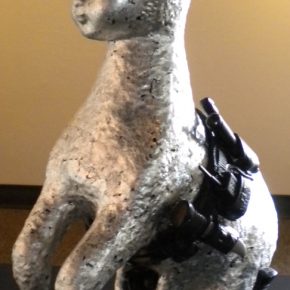 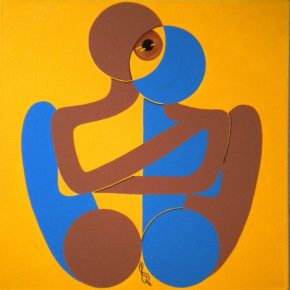 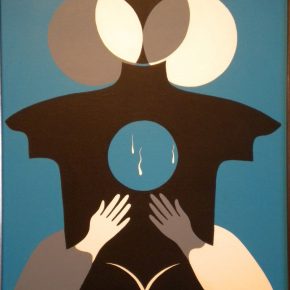