The first generations of female Utah artists, those who worked from the end of the 19th century to the middle of the 20th, lived through troubling times including two world wars, the 1918 influenza epidemic and the Great Depression. Times of crisis like these propel people to thoughts of mortality and one’s place in the universe. Though we often think of Utah culture as homogenous, these artists approached religious faith from a variety of perspectives and it influenced their art in different ways. Their diverging religious faiths (or lack thereof) reveal the ways in which these women artists understood their own lives and the role of their work as artists.

Harriet “Hattie” Richards Harwood, for one, had very clear ideas about life, religion, and God. Though she grew up in predominantly LDS Salt Lake City, and her father, Dr. John Heber Richards, was a pioneer settler, Hattie, was not a believer. To her, the meaning of life was a mystery, and it was arrogant to try and pretend otherwise. In a private journal, she wrote, “May we not without hesitation affirm that a sincere recognition of the truth that our own and all other existence is a mystery absolutely and forever beyond our comprehension contains more of true religion than all dogmatic theology ever written.” To her, it was most honorable to acknowledge we cannot know the mysteries of the world. She had no patience for any organized religion which claimed these answers.

She did not hope for an afterlife — the idea of it was exhausting. In the same journal she wrote, “The most desirable thing, after a pleasant life, is eternal rest and peace in the grave, for no matter how glorious an eternal life might be, it would be a fearful burden to intelligent minds.” Similarly, the idea of resurrection to her was laughable. With biting sarcasm she wrote, “If there have lived any men who have lived lives which were good enough to make them deserving resurrection, history has failed to record it.” An epic burn for all of mankind. 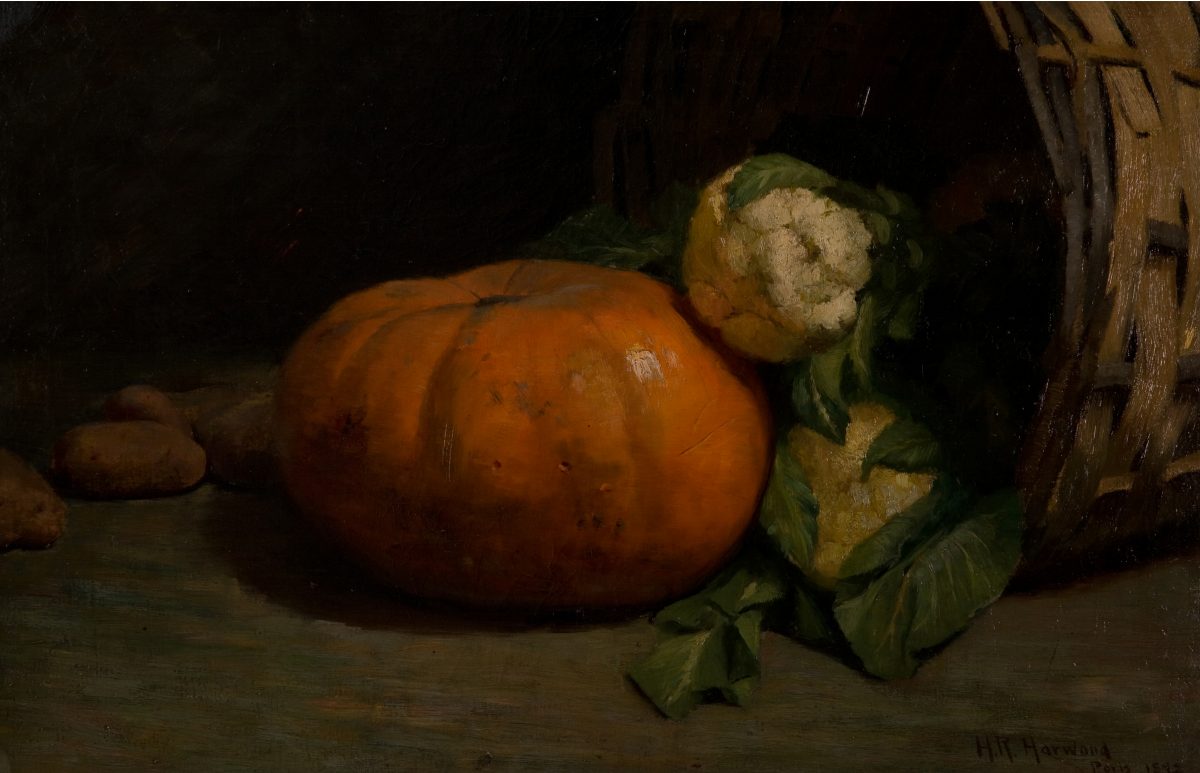 Harriet Richards Harwood, American, The Pumpkin and the Cauliflower (Still Life), 1892, oil on canvas. From the Permanent Collection of the Utah Museum of Fine Arts, University of Utah Collection.

Harwood’s agnosticism about the universe and lack of belief in an afterlife is noteworthy, especially because of her upbringing. She was raised by devout Mormons and was dear friends with many other Latter-day saints. She was childhood friends with Utah art superstar and Relief Society General Board member Alice Merrill Horne, and they remained close throughout Harwood’s life. When she and husband J.T. Harwood were married while studying art in Paris, they were greeted on their wedding day by the art missionaries, Lorus Pratt and Edwin Evans (sent to Paris to improve their art skills for murals in the Salt Lake City temple). Though Harwood’s social circle was full of devout, believing members of the LDS Church, she was proud, though, that she had come to her own independent thinking about the nature of life, death. She wrote, “The knowledge that I have been completely able to throw off the pernicious teachings of childhood gives me great satisfaction, so do the facts that none of my children are under the influence of authority, tradition, superstition, or similar hallucinations, neither is anyone else by an influence of mine.” [1]

Though Harwood was resolutely agnostic, many of her contemporaries were steadfast believers. Alice Merrill Horne served on the LDS Church’s General Relief Society board from 1902-1916, and wrote frequently for church publications including The Relief Society Magazine and Young Woman’s Journal. For Horne, art and the pursuit of beauty was a spiritual act. Cultural historians Heather Belnap and Josh Probert have demonstrated the religious and spiritual aspects of Horne’s “Gospel of Beauty” in recent essays.[2] Their research and writing shows how Horne’s life’s work of supporting art, artists, and beauty, was tied to her spiritual beliefs in morality and God. In one of her essays Horne writes, “Let us take up again this study of art in our society with the hope that the Gospel of Beauty may dispel much of the ugliness which grips the race. Remembering always that it is our privilege to flood the world with the beautiful and the good.”[3] Horne was a believer and believed in the connection between her work in the arts and building the Kingdom of God.

Mary Teasdel was a strict adherent as well to this “Gospel of Beauty.” Like Harriett Harwood, Teasdel went to Paris to study art and was one of the most well-known and respected Utah artists of her time. As historian Heather Belnap has noted, Teasdel argued for the connection between art, beauty, and God in a 1906 essay published in The Young Woman’s Journal. To Teasdel, art was a reflection of God and “a powerful instrument for spreading His word.”[4]

Interestingly, though Harwood was not a devout believer, her works would have been considered beautiful and uplifting to Horne, Teasdel, and other adherents of the “Gospel of Beauty.” Works like Harwood’s famed “The Pumpkin and the Cauliflower (Still Life),” painted in Paris and exhibited at the 1893 Chicago World’s Fair, epitomized ideas of Progressive Era beauty. It elevates the everyday to the beautiful, with its calm, serene composition, and impeccably painted surface. It is simple in its refinement. It would be a prized possession in a Progressive Era home and for believers like Horne and Teasdel, would uplift the morality and spirituality of those who lived with it. Homes that incorporated artwork and were built on “artistic lines,” Horne wrote, “have an abiding influence for honesty, refinement and spirituality.”[5] Harwood’s elegant still life fits that mold. 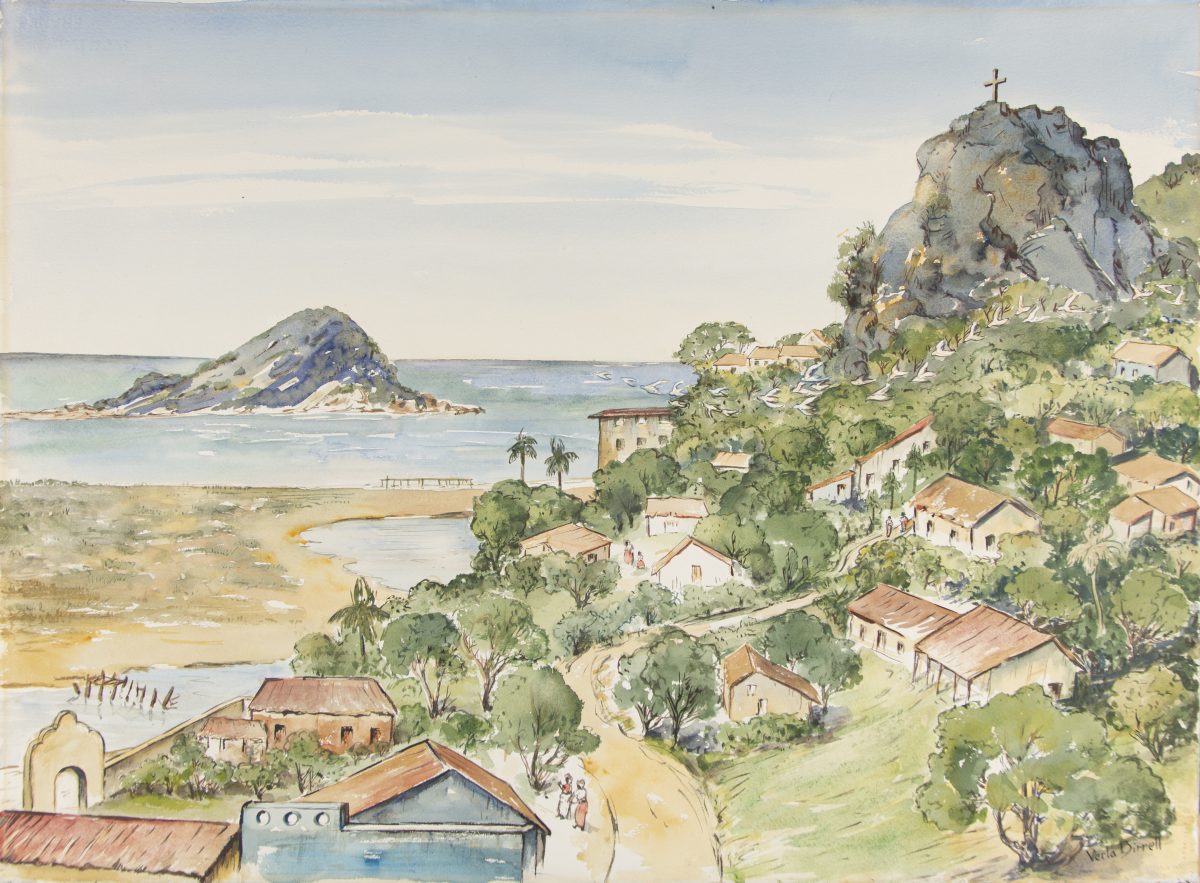 Verla Birrell, American, Street Scene-Mazatlan, undated, watercolor. From the Permanent Collection of the Utah Museum of Fine Arts, gift of the College of Social and Behavioral Sciences

Other artists of this period were also devoutly religious. Verla Birrell, called the “globe-trotter” of Utah art by Horne, was a committed and exuberant Latter-day Saint. As part of her work as archaeologist and “globe-trotter” she made several trips to South and Central America. She used her research and observations there to write an almost 600 page-long field guide to the Book of Mormon that cross-referenced her cultural knowledge of ancient American cultures with Book of Mormon theology and scripture. Though its content may be easily discounted now, this mammoth text shows the devotion Birrell felt toward her faith. In her papers at the BYU Library’s special collections, Birrell wrote about her belief in the Holy Ghost and speaks of how this belief blessed and guided her life: “It has provided me with a means of contacting my Maker and Master. It has provided me with special insight and given me the ability to carry out inspirational and creative projects.”[6] She mentioned the Book of Mormon Guidebook as one such project. Though Birrell’s paintings of her travels abroad, like the UMFA’s “Street Scene -Mazatlán,” do not have overtly religious themes, they are connected, geographically at least, with her religious belief system. These paintings serve as scene setters and geographic recorders for her Book of Mormon Work.

Minerva Teichert, Jesus Christ is the God of that Land, 1948, oil on board, Springville Museum of Art

Birrell’s contemporaries, Mabel Frazer and Minerva Teichert, were also staunchly LDS and also completed major Book of Mormon projects at this time. Minerva Teichert painted murals for the Manti Temple in 1947 and completed a large series of Book of Mormon paintings (currently in the BYU Museum of Art’s permanent collection) shortly thereafter. For Teichert, this was “the greatest joy as well as the toughest job I ever hope to undertake.”[7] In 1953, Mabel Frazer was commissioned to paint a mural for the LDS Thirty-third ward depicting Christ’s visit to the American continent as told in the Book of Mormon.[8] This large, ambitious painting resides now in the permanent collection of the Springville Museum of Art. These ambitious, large-scale projects demonstrate the ways these artists used their work to practice and reflect their faith. Their creative acts were in many ways devotional.

Florence Ware, another central figure in the Utah art world, was religious but not Mormon. She painted several religious-themed works, including a mural of the Madonna and Child for Judge Memorial Convent Chapel and of a group of angels under a cross for the chapel at St. Mark’s Hospital. The latter she used to illustrate a Christmas card with a poem and prayer by Helen Taylor that might be prescient for us today, as we try to shelter-in-place and stay home to protect the most vulnerable around us. It reads:

Make it safe by night and day;

Bless these walls, so firm and stout,

Keeping want and trouble out;

Bless the roof and chimney tall,

Let thy piece be over all;

Bless this door, that it may prove

Though Utah’s historic women artists had vastly different religious beliefs, and beliefs about the nature of God, spirituality, and mortality, one thing they have in common is that their work allows them, and their memories, to live on. And though they vary, their religious beliefs, artwork, and writing reveal the way they grappled with their own mortality and the meaning of life — something all too relatable as we grapple with these same questions today.