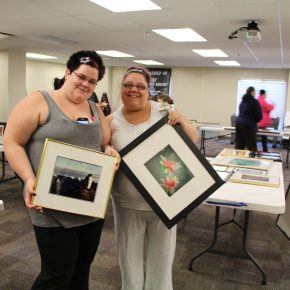 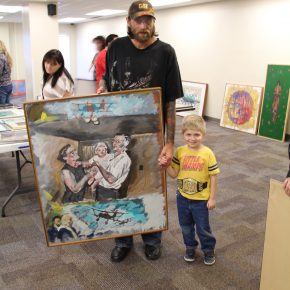 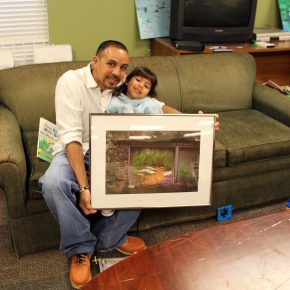 A recent art project points to the nature of art as the “intersection of many human needs,” to paraphrase a quote by contemporary artist Carl André. “Art in Your Home” provides a rare opportunity for people living in transitional housing to own an original work of art, bring art to populations often excluded from the art world – those living in poverty.

On September 12, the Utah Division of Arts & Museums (UDAM), partnering with The Road Home, gave away 112 unclaimed paintings, drawings, and prints to the residents of Palmer Court, a permanent supportive housing complex for individuals and families that have experienced chronic homelessness. The facility is managed by The Road Home.

For Felicia Baca, manager of visual arts for UDAM, the project was the culmination of a vision she had after joining the division a few years ago. As she and other staff members searched without much success for artists who had never claimed their artwork submitted for exhibits going back as long ago as 30 years, she began to think of the abandoned art as an enrichment opportunity rather than a storage problem. At the time, however, there were other priorities and the project stayed on the back burner until early this year.

Baca and staff at The Road Home and Palmer Court came up with an orderly way for residents of the 210-apartment complex to view and select art for their homes. First, residents registered for half-hour time slots, then showed up at the selected time to look and “shop.”

“I didn’t know what to expect, whether it would be hard to get people there,” said Baca. “But people were lined up in the hallway to sign up for a time slot, and then everyone showed up on time to make their selection.”

Just about every genre of two-dimensional art was represented in the works distributed. Baca and her team had bets on what would go quickly. “But we were wrong,” she said. “The choices were very personal.”

One woman, said Baca, spent almost the whole time slot deciding between two pieces. One was a painting of a church and the other a portrait of a woman who looked a bit like her. In the end, she selected the church painting because of the memories it evoked.

Another resident who is legally blind arrived with a written list of things she likes — barns, horses, and western scenes. Baca helped her pick out a painting of a barn. She held it very close to her face to study it and finally decided to take it.

Residents responded with gratitude to this unusual opportunity to own an original work of art. One resident, named Jennifer, said, “I totally appreciate the time and effort people took to make this happen.” She added that she has never been to an art museum. In addition to being able to pick a piece of art, she appreciated seeing so many different kinds of artwork.

In the end she selected a painting of two penguins on an iceberg. “I’m all about animals, and penguins are my daughter’s favorite,” says Jennifer. The new painting hung for a while in the living room of their apartment, but now it’s in her seven-year-old daughter’s bedroom. The daughter proudly claims, “That’s my penguin picture, Mom.”

Tagged as: Art in Your Home, Felicia Baca, The Road Home