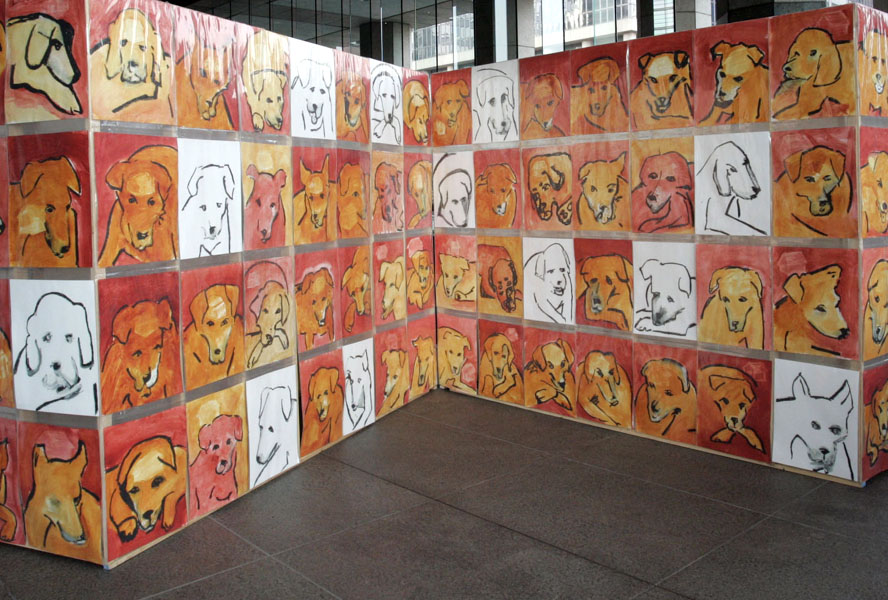 One of the most hotly covered news questions immediately following Barack Obama’s election was: What kind of dog will the Obama family bring to the White House? At his post-election news conference, the president-elect mentioned that the family’s first choice would be to choose a shelter animal (though his daughter’s allergies might make finding the appropriate one difficult). In a lighthearted moment – Obama referred to himself as a mutt – the press conference touched on a very serious topic. As a society, do we understand the role animal shelters play in removing unwanted pets and strays from our streets and back alleys? Or do we talk ourselves into believing that somehow each of these animals will eventually find a warm, loving home for the rest of its long life? The actual role of the animal shelter as a terminal point for millions of our pets is the reality, and is becoming disturbing to more and more Americans. Through exhibits like Art for Animals, at Dixie College’s Sears Art Museum Gallery through January 16, we are brought to the realization that each animal is a living, feeling entity, AND, that their numbers and “unwanted” status are a negative reflection of each of us and of our society as a whole.


Art for Animals, sponsored by Best Friends Animal Sanctuary of Kanab, and Tyler Poolco of St. George, uses traditional mediums of drawing, painting, assemblage and ceramics to declare that euthanasia is not the answer to overpopulation of domestic animals. The show features Cyrus Mejia’s 575 Project, a traveling art project that in an explosively poignant way brings attention to the 575 pets euthanized every hour in the United States. Local artists were also invited to submit work for this exhibit as a memorial to the lives of these unwanted pets. Cyrus Mejia says “I look forward to the day when this idea [saving pets from euthanasia], which has already taken root in so many communities, will blossom to the point where there are truly no more homeless pets.” 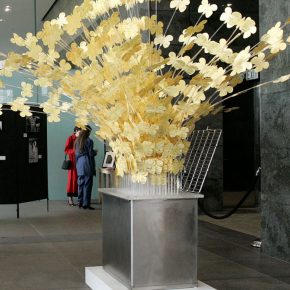 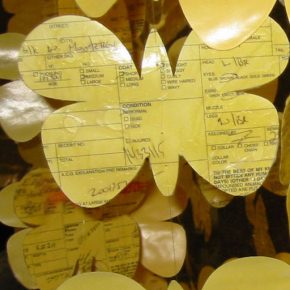 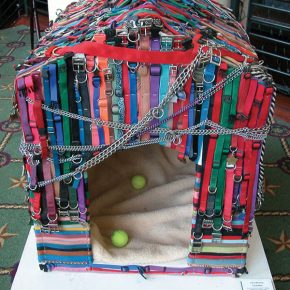 Kathy Cieslewicz, Curator of the Sears Gallery, says the idea to invite Cyrus Mejia to the gallery came when the artist explained that although his show has appeared in large cities such as Chicago, Los Angeles, and Phoenix, it has never appeared in its entirety in the State of Utah. Cieslewicz “saw this as an opportunity for the Sears Gallery to display all of the pieces under one roof.” She says “Other selected artists were invited to create art to hang on the gallery walls. These works all follow a theme depicting dogs and cats as intelligent, sensitive, and aware beings.” 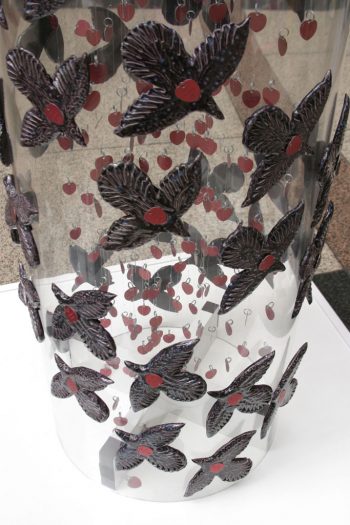 Mejia, who addressed the crowd at the opening reception in the Sears Gallery on November 14, was born in New Orleans in 1947. He studied art at Hinds Community College in Mississippi before a several-year tour of Europe. An encounter with dogs caged in a London research facility planted the seed that changed the direction of his art. In 1984, Mejia, his wife Anne, and a few other friends founded Best Friends Animal Society, now headquartered in Kanab, Utah, where they both live with their family of dogs and cats. In his opening night presentation, Mejia said that the idea for the 575 Project came from his attempt to understand the millions of pets that are euthanized every year. When completing the calculations, he figured 575 were euthanized every hour. “I decided this was a number I could do something with,” Mejia says. As a result, each of his pieces is made from 575 individual objects. One doghouse is covered with 575 dog collars, another piece displays 575 soaring paper butterflies made from the paperwork processed while euthanizing pets, and yet another work features 575 license tags flying upward on the wings of ravens. These items were all collected from animal shelters around the country. Mejia says, “I believe art can and should play a role in society. Art can grab the attention and shine a bright light into dark and hidden corners. What happens to homeless pets in shelters is a dark corner that I hope to illuminate with The 575 Project.”

At the exhibit’s opening reception, Mejia included a performance piece for his project. He lit 575 candles, hand-molded in cat-food tins. After they were all arranged and lit, making a magnificent display, participants extinguished the candles in a single moment, the immediate darkness symbolizing how quickly 575 small lives are taken from us.

In addition to Mejia’s project, Art for Animals includes works by over twenty-five local and regional artists. Jeff Ham’s pieces provide a spectacular display of color and movement throughout the exhibition. The personality of his animals is vividly portrayed. Lee Udall Bennion’s pieces grab your eye and are quickly identifiable along with her signature frames, and capture humanizing characteristics of her animals. Julie Rogers’ pastels are moving and playful with large strong strokes. LuAnn Williams created two poster-size original dog and cat prints using a spoon as her press, resulting in wonderful crisp lines. Anne Weiler Brown’s pieces are abstract, most striking of which is a lion materializing from shadow. Royden Card’s cat silhouette print is simple but full of movement. Donald Brown’s “Help” poignantly displays every caged mutt’s plea, and Lonni Clarke’s dog portrait almost leaps from the canvas. 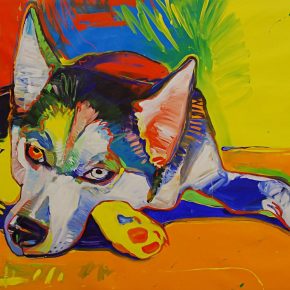 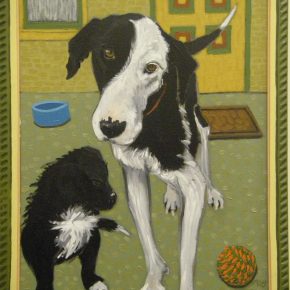 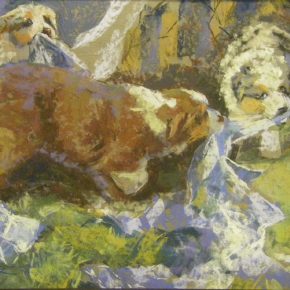 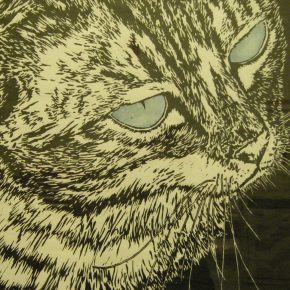 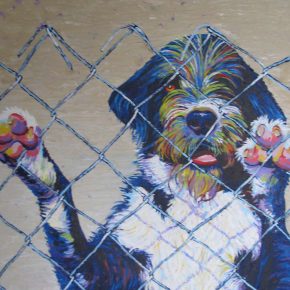 This large group of artists, in conjunction with Mejia’s work, brings together a wide range of mediums and styles with one theme in mind: delightful animal personalities play a vital role in our lives but that our “throw away” society is wasting this precious resource. The show celebrates animals as pets and conversely portrays the cold meanness of lives snuffed out.

When you visit be sure to investigate the interactive doghouse/computer display where you may search for a pet who is looking for a home. Best Friends Animal Sanctuary is always looking for good families to adopt their inmates. All show pieces are for sale. 20% of sales from Art for Animals goes to the Best Friends Sanctuary. In addition, each artist has the choice to donate any additional percentage to an animal shelter of their choice. Cieslewicz says, “I hope all animal lovers will come to enjoy the exhibit and will consider purchasing a piece of artwork to benefit Best Friends Sanctuary, the Sears Gallery, and other animal organizations. We appreciate Tyler Poolco for helping to sponsor the exhibit.”

Art for Animals continues at The Sears Gallery through January 16. Hours of operation are limited to weekdays from 9 to 5. The Sears Gallery is also open during theater productions, but check the box office before heading out.