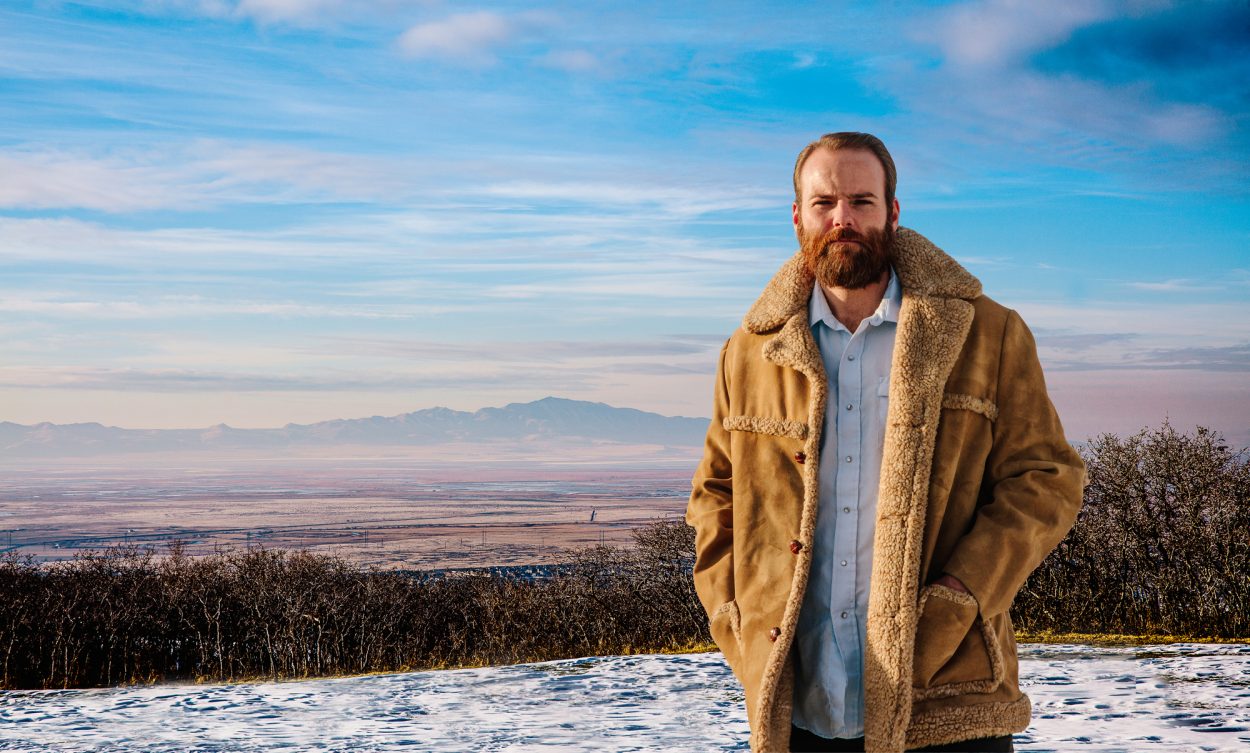 Cody  Chamberlain, with Antelope Island in the background.  Photo by Simon Blundell.

On a recent trip East, Cody Chamberlain visited the usual museums: saw the blockbuster Michelangelo show at the Met, a terrific O’Keeffe in the Carnegie, hit the Warhol and MoMA, too. But he also stopped at the other exhibits that really mattered to him: the woods, conservatories and botanical gardens along the way. Chamberlain, 36, is not only an artist but has worked for the U.S. Forest Service for 17 summers, too, and shaped a satisfying life around both his love of nature and of paint.

Though he would like to just do art full time, he expects to be back in the Wasatch again this year. “My work with the Forest Service helps me clear my head and provides a great contrast to time spent working in the studio. I have a hard time thinking of letting that go,” he says. “Patrolling Utah’s high country has been such a beautiful way to supplement my artistic career.” 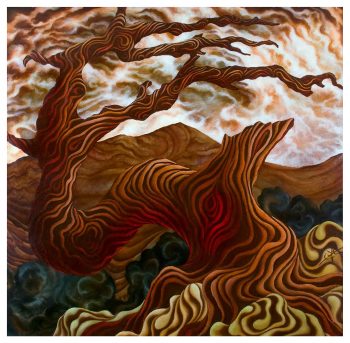 He craves junipers and redrock, and figures he’ll eventually settle somewhere between Santa Fe and Bluff. But New York City impressed him, with its subway and art. “When I was there in my 20s, I thought I could maybe stand to live there for a few months; now that I’m older I could probably handle a couple of weeks in the big city,” says this small-town Utahn with a laugh.

But he saw a group of schoolchildren on a field trip sitting in front of a Jackson Pollock and thought how lucky they were. “To have had access to that kind of art as a kid would have made a real difference, I know it would have,” he muses.  “I didn’t start painting with oil until my early 20s. But I’ve always done drawings. Like I had a couple of days in New York where I just hung out in the Poconos, in the woods, and drew. I can do that wherever.”

He sometimes hangs out at Sundance, hiking with “dessert” Pop artist Kent Christensen, and his work often hangs at Sundance Art Studio, as well — he had a show there in 2016 and 2017. He was selected as part of Artists of Utah’s 35 x 35 show at Finch Lane in 2016. “Desert Wake” a mixed-media piece that appeared in that exhibition, was also included last year in the Utah Statewide Annual and was first-place winner at the Eccles Community Art Center Annual Competition in 2013. In 2017, he exhibited twice at the Springville Museum of Art, and showed at Logan Fine Arts and at Eccles Community Art Center. “Bird of Prey #2,” part of a series, appears in this year’s Statewide Annual Exhibition at the Rio through Jan. 15. 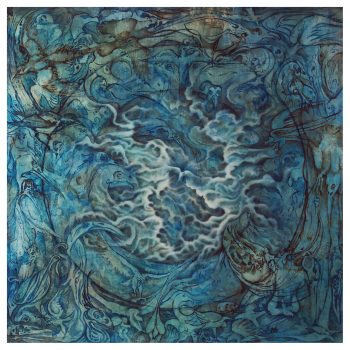 The first in the series, “Bird of Prey #1,” a 4’ x 4’ oil on linen stretched over aluminum, was in the Statewide Annual three years ago. He has another 48” x 48” in progress in the same series and paints an American kestrel here, an eagle or sparrowhawk there as he works sporadically on it in his Sugar House studio, along with several other pieces at the same time. He describes his painting surface as having a sense of ceramic to it, particularly in the blues he achieves. Now he is working with gold leaf on coffee and tea paper and also is adding gold leaf to his oil on linen work to spectacular effect.

For the 2016 Annual, his mixed-media work “Inside the Mesa,” a painted box with antlers, was juried in.  The work was conceptualized during a three-day backpacking trip in Cedar Mesa, just south of The Bears Ears Buttes, Chamberlain told me then. “The organic media used were collected from pieces of the desert life cycle. The elk antlers were bleached by the sun, having been shed by the animal the previous year,” he explained of the suddenly very timely work. “I carried them on my back for over 20 miles. The juniper berries had ripened and naturally dried. No animals or plants were harmed. That is important to me and to my process. I believe that the part I play in my interaction with the wilderness is that of a respectful observer, not an interloper.” 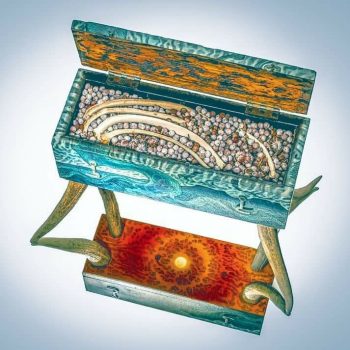 “Inside the Mesa” by Cody Chamberlain, multimedia box, courtesy the artist.

He knew nothing then of the local and national controversy that would soon surround the area. “My endeavor in this piece is to bear witness to the landscape I encountered during my hike in Cedar Mesa; the billowing clouds, the twisted junipers, the wind and ceaseless movement of the parched ground, all set at the base of the static outline of the Bears Ears. I saw a continuity and equivalency between my own life experience and the cycle of life and death playing out around me there,” he observed. “As always, getting out and having the experiences that inspire me is key. . . . I love the least-touched spaces in the Southwest, and that takes work. . . . My [future] plans include many excursions,” Chamberlain said.

He made one to Antelope Island with this writer on a frosty, misty day in late November. We had determined some months before that an interview at Chamberlain’s “other” studio, would be most comfortable for him and chose Antelope because he visits the island at least twice a month to hike and photograph the flora, fauna and, mostly, the birds there for his work and his Facebook page. A couple times a year, he tells me, for a fee, there’s an event where you can hunt bones and skulls there and if you find any, take them home. Chamberlain always finds some. That day, he showed me porcupines in treetops, roaming antelope and buffalo herds, a lone cougar, and all manner of birds. 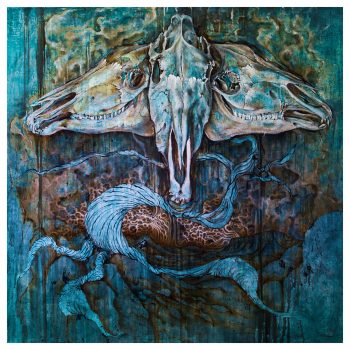 The artist tells me he spent his childhood in the desert camping with his father (who had camped and hiked there as a child with his own father). “My father died in the desert [in a car accident when Cody was 11], and was buried there. It is a part of me, and I hope, respectfully, that I am a part of it as well,” he says.

His mother lives in Orem, but his grandparents raised him half the time in Cedar Fork, a small Utah town near Fairfield, west of Utah Lake – “mountains and sagebrush as far as you could see, just a great place to grow up,” where he would hunt bugs and do all the things he used to do with his dad — and now does all the things his dad once did in the desert Cody now loves. Hiking, sketching, looking at rock art, hunting bones . . .

His parents, he says, were both artistic – they were painters and Cody grew up painting and sculpting. There were always art supplies around. “People ask when I began doing art, as if there’s a start date or something. I just always naturally did this,” he says.

After earning his BFA at UVU, Chamberlain studied anthropology with an emphasis in archeology in a master’s program at the University of Utah but decided after a couple of years, “I couldn’t let the art go. It was sink or swim; that’s what I was going to do. It was always there, I could never put it away. Art wasn’t something I was going to do in my spare time. It IS my time.” 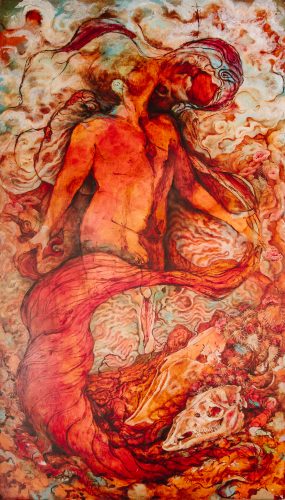 “Bough of the Juniper #1” by Cody Chamberlain, oil on linen, 4′ x 8′ Photo by Simon Blundell 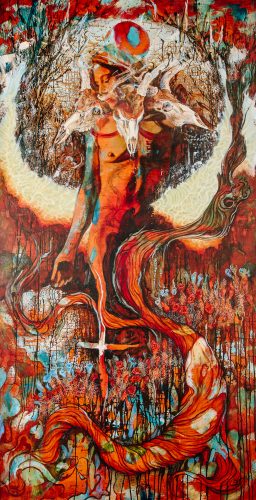 “Bough of the Juniper #2” by Cody Chamberlain, oil on linen, 4′ x 8′ Photo by Simon Blundell

Like the Forest Service, he says. “In the Unita-Wasatch-Cache National Forest – it’s a really good gig. And I’d been doing that for a number of years when I read Desert Solitaire, and it was really mind-blowing to know that one of my idols, Edward Abbey, was doing the same thing: working for the Parks and Forest services and then, in the off-season, writing and publishing.”

Broadly, he says, there usually is an environmental theme to his work, “and I like there to be a message incorporated somewhere into the painting, of that experience that we just had today, that feeling of discovery, of the natural world. I like that mystery to be wrapped up into my paintings. So I can go on a trip like this and refresh myself, remind myself of these different aspects and hopefully that leaks through in the paintings to someone who will get the same vibe. So even if they’ve never been out to someplace like this, they still experience a taste of what it’s like,” says Chamberlain.

“If people don’t feel something like that, or have a connection,” he adds, “then why would they want to protect it? It’s not on the plate for future generations. It’s getting beat out by all the other things we have in this world, video games and . . . I mean technology is great. I love science, but there’s so many more distractions for people that wilderness is getting put on the sidelines and I want to play a little part in reminding people that there’s this whole huge untouched chunk of honest earth out there that we’ve barely scratched the surface of understanding before it’s gone. So I’m tapping into that,” he explains.

Chamberlain preps his own canvases. “I use rabbit-skin glue to adhere it to aluminum board and prime it with a flake white. It can take a beating. It is quite the process to get it to where I can paint something.

“With a lot of the drawings I’ll get a really nice Arches watercolor paper, and then use coffee or tea, different dyes to really just work the paper. The tea and the chemicals work with the paper to give you all these funny colors you didn’t even expect. The tea is red and you put it down on the paper and suddenly it’s bright blue and that gives me this whole world to work into — and it smells great.”

He does plenty of commission work these days, too. “So I can’t complain. But I’d really like to have a year, year-and-a-half to build up a body of work and have a gallery show. But I got some really good advice from Kent [Christensen]. I find myself worrying too much about what another artist is doing or what a gallery might accept. ‘Push that all aside and concentrate on your own work, and do what you want to do there and live your life,’ he told me. And it’s true. I’m painting and doing drawing on the side, I’m experiencing some wilderness, and I stopped letting these outside, sometimes negative, influences come in. 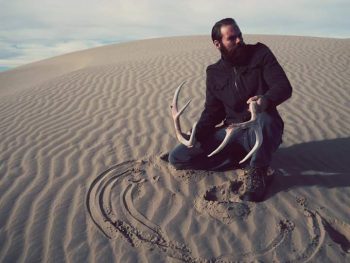 “You evolve your own way. It’s hard to be in charge of your own business, let alone when your business is art, but that’s what I’m doing, regardless. And I’m having fun doing it. It encompasses all aspects of my life,” says this artist who clearly will continue to incorporate his adventures in Utah’s desert landscapes and the concerns of environmentalism into his work. “I do a lot of experimentation, “ he says, “because I feel this need to branch out and see what’s behind that next horizon.”