Art by the Numbers: Dan Cummings Makes a Point 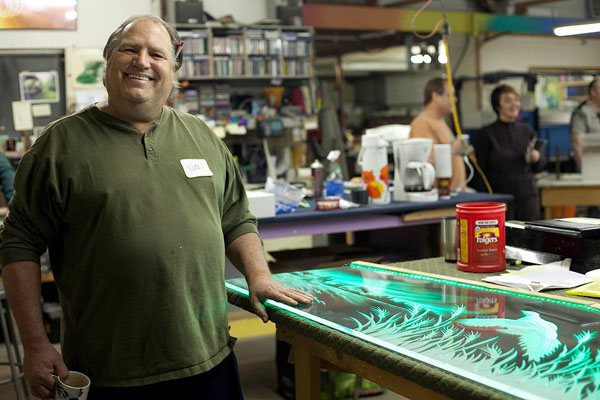 Glass, like painting, sculpture, or any other art medium, flourishes in a variety of techniques. Just as an artist can paint in oil, acrylic, watercolor, with spray paint and stencils, or any number of other innovations, and just as a sculptor can build up clay to be cast in bronze, cut down a block of stone, ice, or chocolate, or assemble individual parts into a whole, so a glass artist can blow molten glass on a pipe, lead together pieces of colored glass into a window, pour crushed glass into a mold to be fused, and so forth. From time to time, an artist in any medium may come up with a small twist that makes a big change in the outcome. Salt Lake glass master Dan Cummings is probably best known for his sand carved works, which often replicate the style of art glass works from the Victorian and Art Nouveau periods. In traditional sand carving, the artist works primarily from the back, carving details into shallow relief within the glass that generate a convincing three-dimensional illusion when seen from the front. But this is not the only way to carve glass with a sandblaster. It’s also possible to sculpt directly, creating a positive form in the round. And, because of qualities more accessible in glass than any other material, this technique can produce remarkable effects.

In a number of works that were recently exhibited at the Springville Museum of Art (through the end of October), Cummings first fused together blank panels of black-and-white glass, producing a material suitable for cameo carving. He slumped some of the resultant slabs to add details and features, then carved them to simultaneously create complex shapes, while the resulting black-and-white patterns reinforce or complicate carved channels, holes, and other surface features. For one of these pieces, exploring the subject of possibilities, he carved 16 identically-sized squares, then mounted them in a 4-by-4 grid.

He didn’t create a single overall design in 16 parts, though. He made 16 independent panels that could be shown in any configuration that he, a gallerist, or an eventual collector might choose. We can imagine Cummings, when the work was complete, looking it over (laid out on a table, for instance) and trying to decide just what arrangement would look best. At some point in this familiar process, though, he evidently began to wonder just how many possible ways there are to lay out sixteen square panels, assuming they would remain in the 4-by-4 grid, in which any panel could be in any of sixteen positions relative to the others, and each panel could be in any one of four orientations. So he did the math.

As the full title of the piece reveals, the number he came up with was larger than almost any non-mathematician would predict. A lot larger. In fact, there are 502 trillion ways to lay out those 16 panels (502 followed by sixteen zeros). What this means is that, if he chose to hang the panels in rotation, allowing them to spend one day in each possible combination, it would take almost one and a half billion years to show every combination once. More realistically, it means that his lifetime isn’t long enough to swap the panels through all the possible combinations on his studio table, just to be certain which one looks best. Instead, he must do what all artists do all the time, which is to arrange the 16 pieces the way his eye tells him works best, trusting in his training and practice to find at least as good an arrangement as anyone else will.

If this exercise proves anything, it’s the virtue of modesty, even for an artist. Dan Cummings, like every artist, must realize that when his work leaves his hands, it becomes the property of the whole world, and he will not be able to command even so simple a fate as that it will always be shown the way he liked to see it. 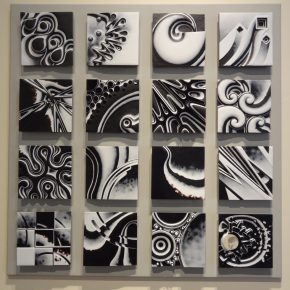 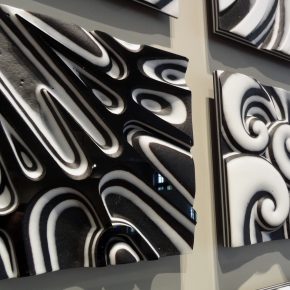 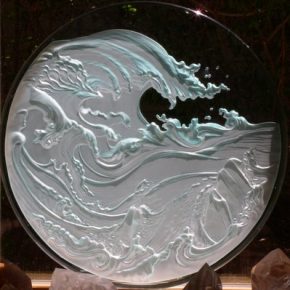 Dan Cummings’ glass work is on exhibit at the Springville Museum of Art as part of the Passages and Pathways exhibit through November 1.