Art Access Exhibit at Marriott Library is a Lab of Wonders 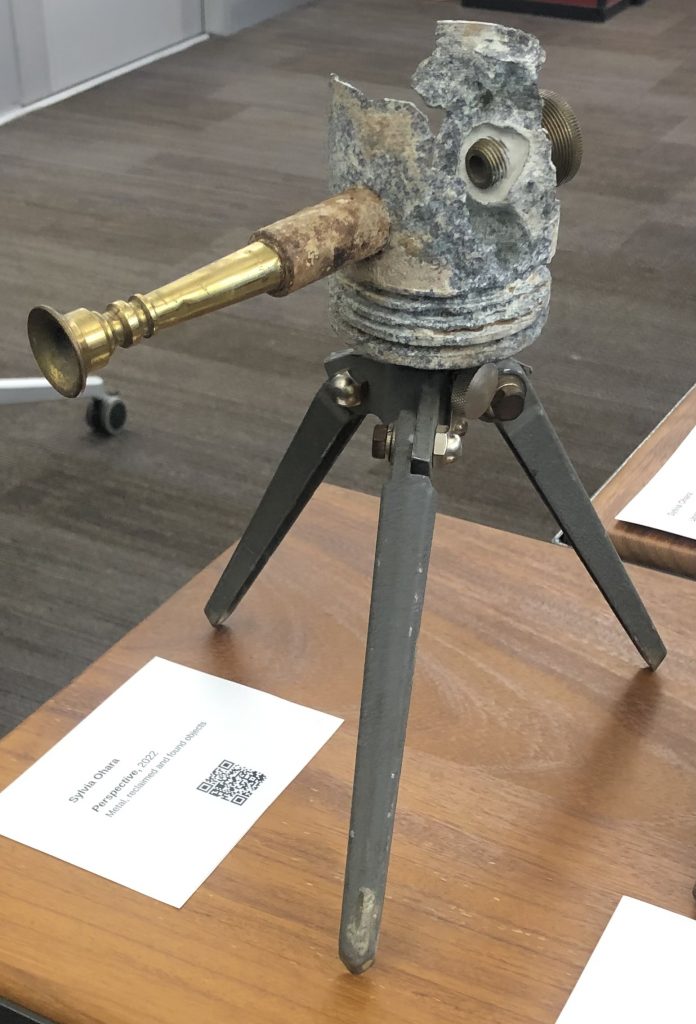 You know you’re dealing with successful assemblage when scavenged and repurposed parts unite to transcend their reality as fragments, though without erasing your awareness of them as such, and instead create a totally convincing alternative interpretation in your senses. Such an object is Sylvia Ohara’s “Perspective,” a three-legged support bearing an assortment of heavily corroded and imaginatively exploited metal parts: specifically, the barely identifiable remains of an inverted internal combustion piston with a candlestick stuck through it horizontally. Together, they irresistibly invoke a telescope, or a periscope, or even an observatory, making a range of references suited to a title that is at once ambiguous and rife with potential meaning.

Artists, as we know, have often mistrusted projects that require collaboration, a position summed up by the disparaging statement that “A camel is a horse that was designed by a committee.” A scientist, of course, would point out that a camel is not an ill-designed horse. Each species is adapted to its environment, which accounts for its success. Whether a species like ours, which adapts the environment to us, can succeed in Darwin’s natural order is very much in question of late. But a project like Art Access’ Embodied Ecologies strives to honor and keep the original order, exploring how humans can improve their fit by adapting to their predicament, their ecology.

In fact, most of the art works in Embodied Ecologies are individually credited. On the other hand, “Woven Lake,” the exhibition’s thematic and geographical centerpiece, is credited to six of the seven artists who participated. Cooperation is a necessity in the sciences, and this is the first clue a visitor may get that this is a hybrid exhibition, part art and part science. For that reason alone, the decision to move it from the City Library, where it was described as an “installation” — an art form that collaborates with its location, and so theoretically cannot be relocated — to the Digital Matters Lab of the University of Utah’s J. Willard Marriott Library, in order to extend its run for two more weeks, led to a revelation. We know how the art experience responds to its environment, which is now an academic laboratory. For its part, Art Access has recently given precedence to its mission, which is to enable artists with disabilities to succeed, while reaching out to other venues to actually exhibit the results. They hit pay dirt with this one, which presents art not as sacred materials, but as the progress report of artists who are also students and scientists. 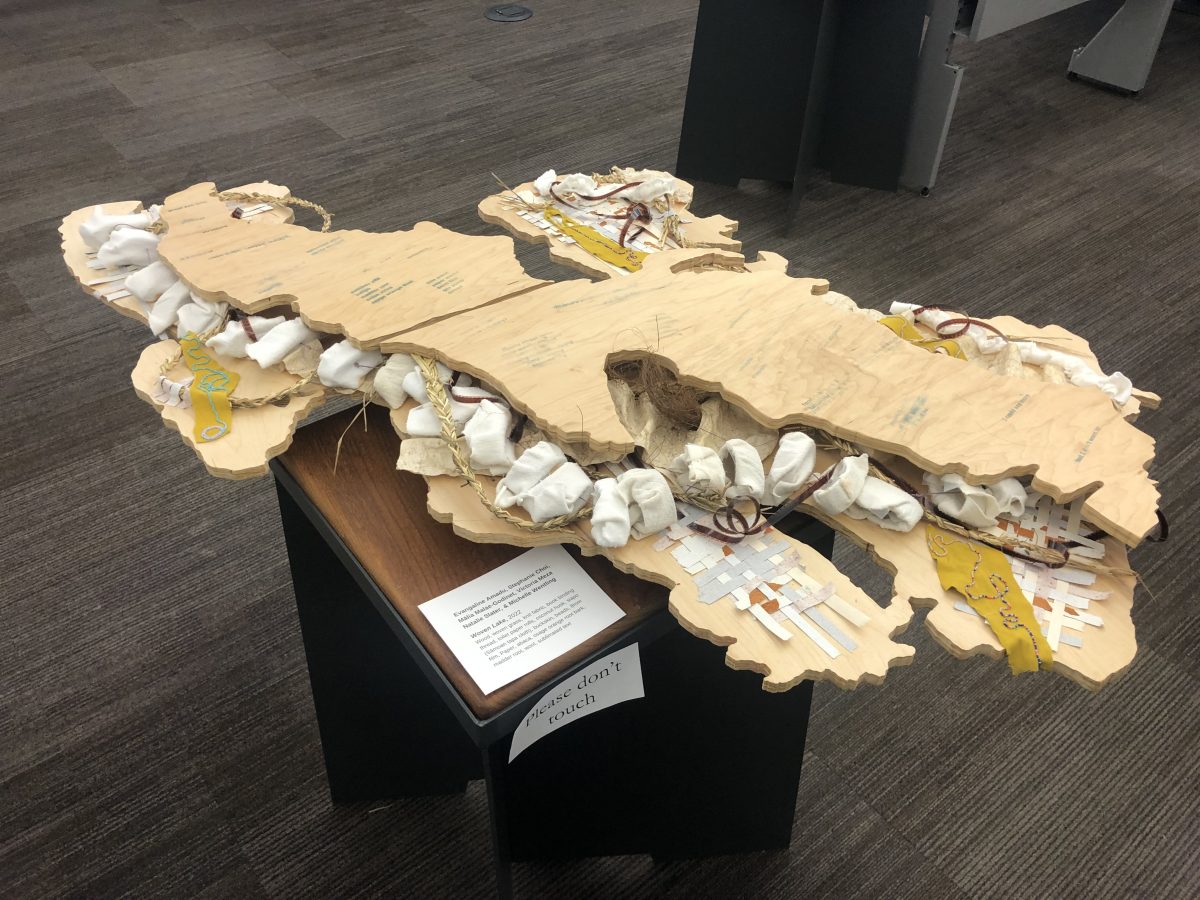 As for “Woven Lake,” It took an unknown number of hours for six artists to create this utterly intriguing three-dimensional model of the Great Salt Lake. Evangaline Amadu, Stephanie Choi, Mália Malae-Godinet, Victoria Meza, Natalie Slater, and Michelle Wentling, each of whom has a story of their own worth hearing, used — that is, they wove together, in physical space and in their minds — wood, grass, knit fabric, book binding thread, toilet paper rolls, coconut husk, siapo (Samoan tapa cloth), buckskin, beads, 8mm film, paper, abaca, osage orange root bark, madder root, wool, and sublimated text. Their uncredited and un-explicated contributions go a long way to suggest the magnitude of secrets waiting to be sought after or guessed at in our environment, and in ourselves. After all, no matter how much is invested in a work of art by its creator(s), what can be drawn out from this sensory bank by its audience has no conceivable limit.

Not all these artists work primarily in a visual medium, though poet Stephanie Choi might argue that poetry’s use of the mind’s eye makes it visual, too. Early in her mixed-media prose poem, “Spine: Rematerialized,” she offers this evocative image of her grandmother on her patio garden: “The vines snake along the chain-link fence. She tends to the soil in her mismatched pots, hunchbacked, sight-going,” while in “Lane Line as Spine,” where floating plastic components from a swimming pool provide a tactile representation of vertebrae and spinal curvature, she shows how visual metaphors can be a kind of poetry. Her story of adaptation to a scoliosis brace reveals her considerable initiative, which through her watercolors, collectively titled “Soluble Spines,” she urges others to adapt for themselves. 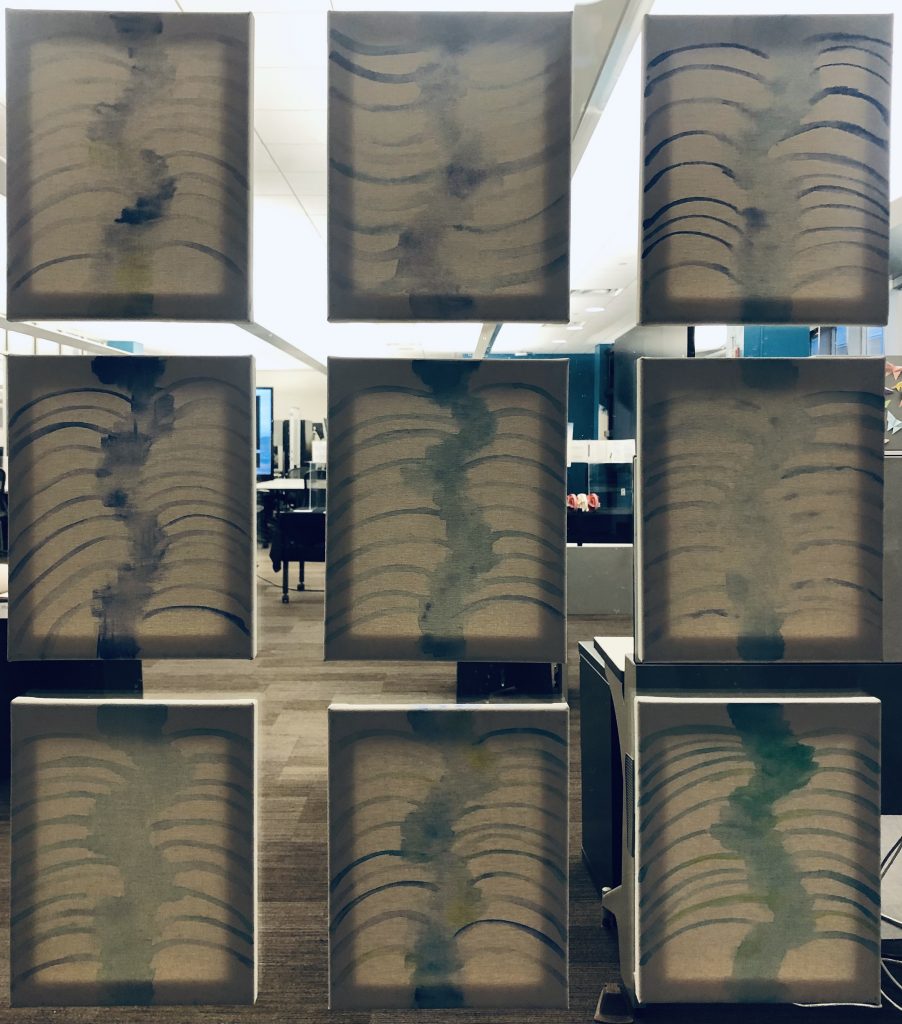 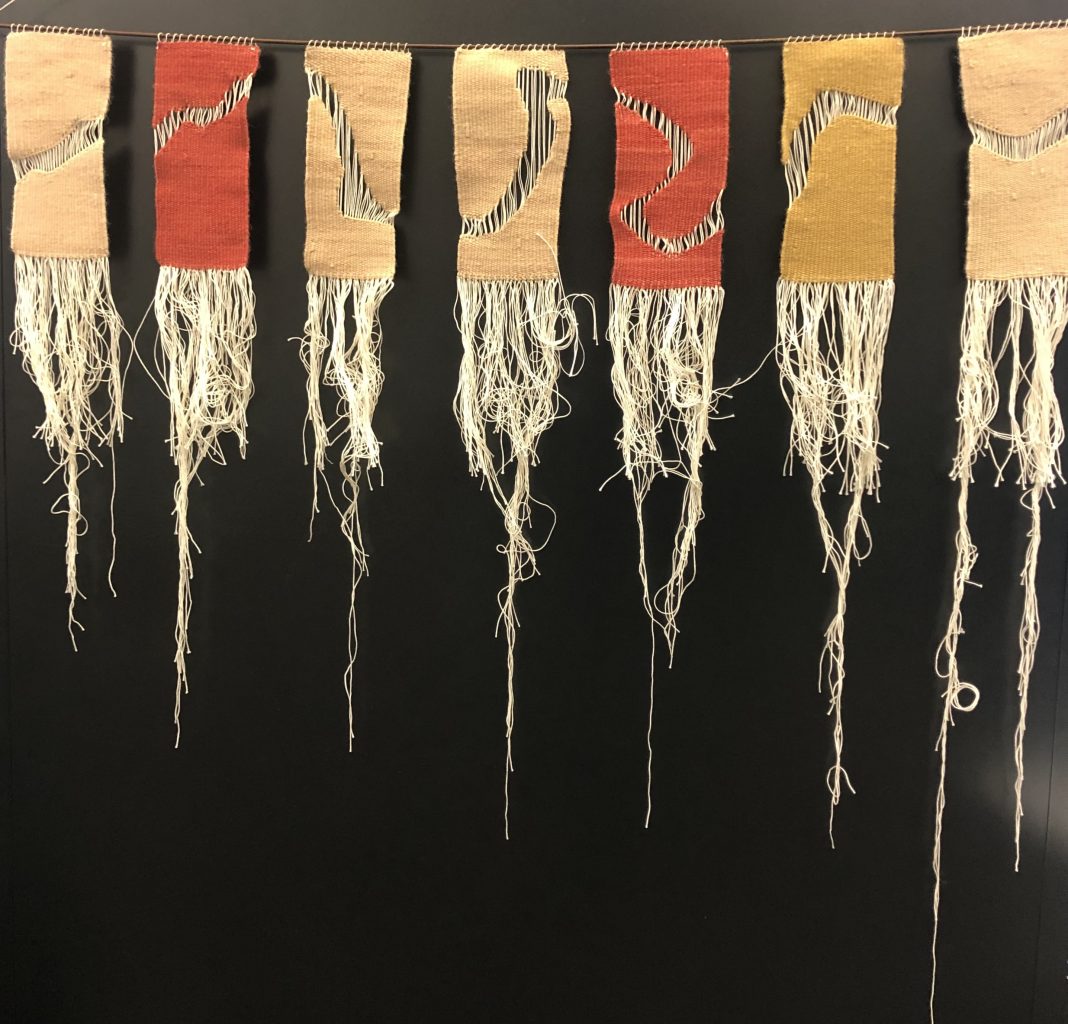 Another artist with interdisciplinary reach, Michelle Wentling, works at UMOCA and recently inherited a Macomber loom, adding weaving to a host of creative activities. Her “Cuyahoga Impression” presents the course of that notorious river as it meanders across seven hung banners. Their materials refer indirectly to the toxic history of the Cuyahoga, famous for its waters having caught fire more than half a dozen times, while the slight, deliberate imperfection of the work asks her audience to withhold giving up hope in favor of “the possibility of repairing connection with places once sacrificed or neglected.”

U of U Master’s candidate Laurie Larson perhaps best fits the paradigm of an artist working to improve connections between biology and design. Works like her “Chair No. 2” explore the possibility of fitting furniture to human bodies without sacrificing their reference to biological forms, while “Dune Fruit” takes a deep dive into the mysteries of both organic structures and functions.

Two filmmakers took part in “Embodied Ecologies”— Stan Clawson, who is the Community Education Facilitator at Art Access, and Natalie Slater, who is also the primary coordinator for this project. Their video freely observes the working of the other seven participants, augmented by a soundtrack of Great Salt Lake’s waves lapping its shores, and then expands to present views of the lake’s natural condition that might surprise those who dismiss it as a post-industrial ruin.

Any attempt to sum up this lab of wonders would only prove its author wasn’t paying enough attention. During a visit to the lab, it becomes quite apparent that no one is about to stop the work. Bringing the body and its ecological envelope into sync is one task that will never be exhausted. 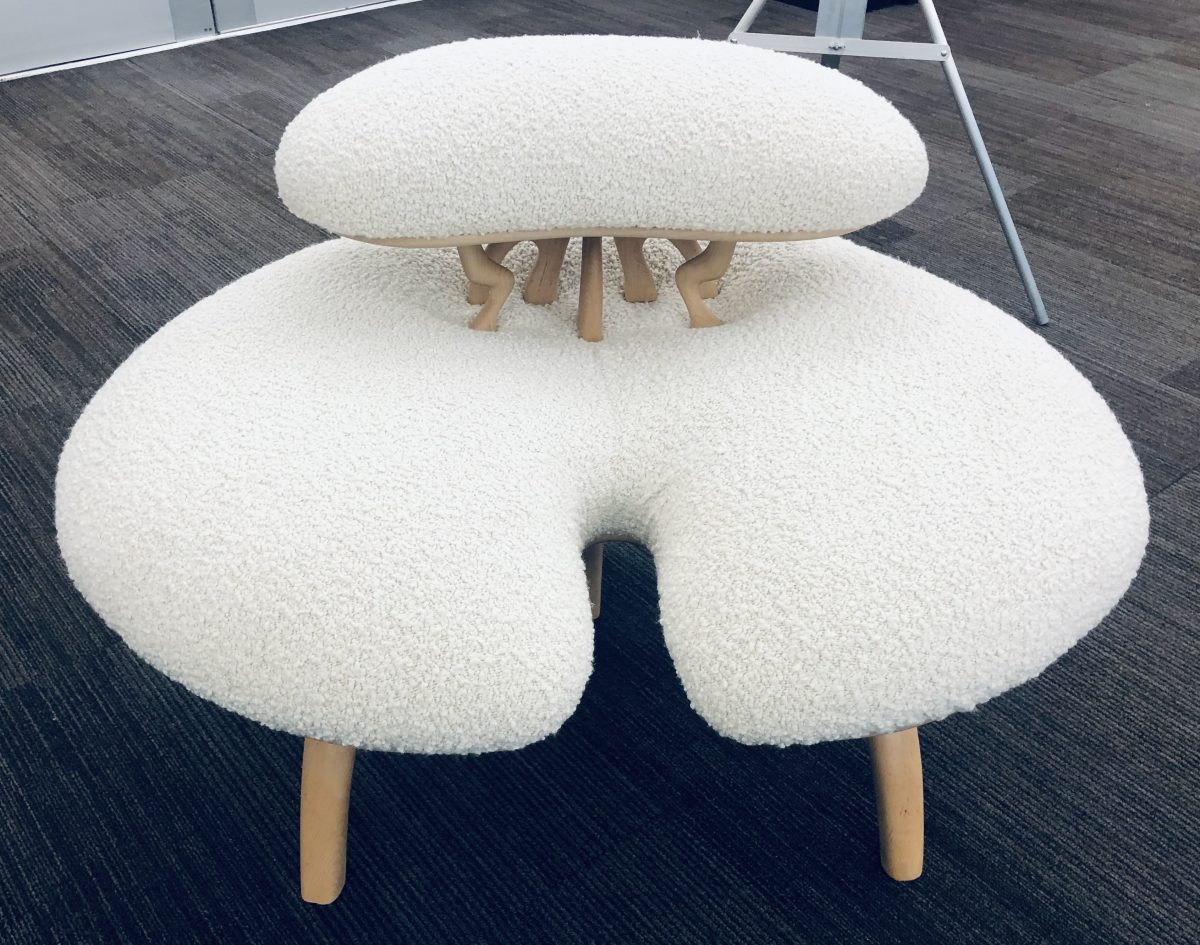