Around the Block with Gordon Cope 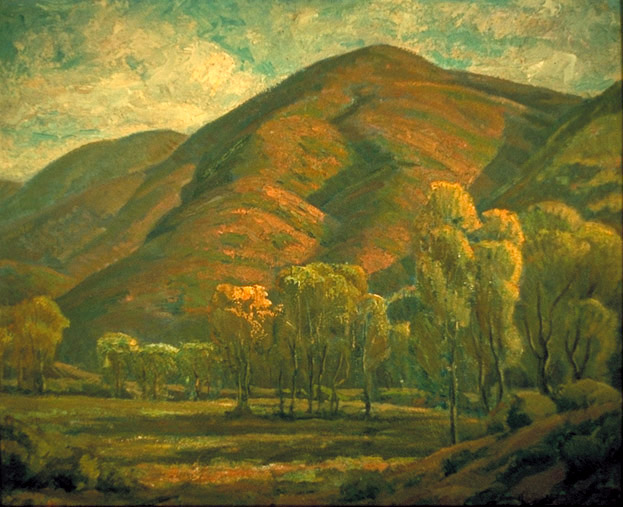 In Olpin/Seifrit/Swanson’s Utah Art, nestled between LeConte Stewart’s 1937 masterpiece, “Private Car,” and Lee Greene Richards’ well-known, “Dreaming of Zion,” is a painting entitled “Utah Hills, East of Springville.” This gem of a landscape was created by one of Utah’s most revered landscape and portrait artists, Gordon Nicholson Cope [1906-1999]. Cope was raised in Salt Lake and, as a youth, studied with fellow Avenues art buddy, A.B. Wright. Cope also received instruction under the watchful eye of LeConte Stewart, whose influence is clearly apparent in “Utah Hills” and other typical Cope creations.

As was the custom with the majority of those first and second generation Utah artists, in 1924 Cope traveled to Europe where, after four years of study of the “old masters” in multiple European venues, he enrolled in the Academie Julian in Paris. Cope found himself back in Salt Lake in 1930, directing the art department at the McCune School of Music and Art, which was housed in the McCune Mansion and had emerged out of the dissolution of the LDS University in the 1920s.* 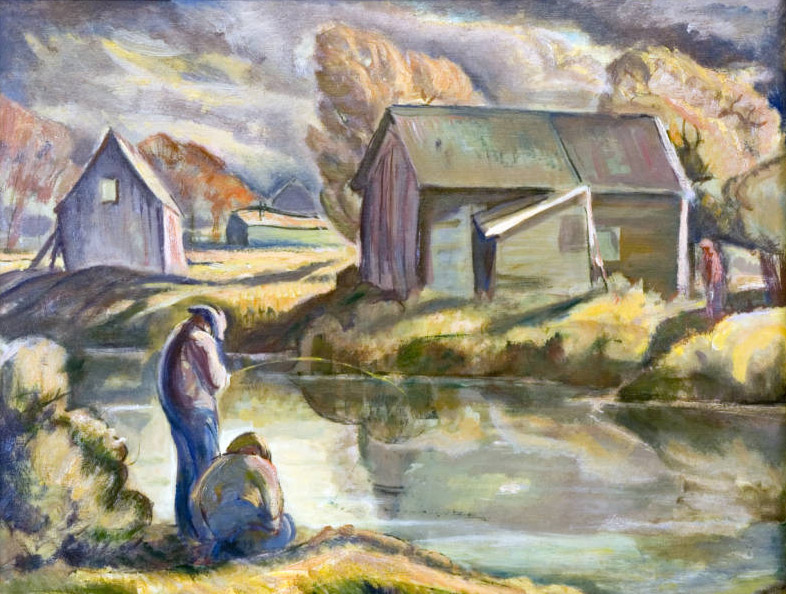 After just one year at the McCune School, Cope spent another year instructing at the short-lived Mountain School of Art, followed by service as the director of the Art Barn School. At the height of the Great Depression, when art sales were minimal, Cope was selected as one of the original ten artists to work under the auspices of the New Deal’s Public Works of Art Project (PWAP). It has always been quite ironic to me that some of the very best art came out of the depression years of 1930 to 1937. Perhaps the depression provided a previously lacking degree of emotion that found its way onto the canvases of Maynard Dixon, LeConte Stewart, Carlos Anderson, and others. What were some of the first assignments of these talented artists who were charged with improving public and educational buildings? The most famous of the works was the 260 foot circular space inside the Capitol rotunda, recently restored and rededicated. Henri Moser painted a triptych depicting contemporary Utah life. Ranch Kimball, as was mentioned in a previous column, chronicled the activities of a number of CCC camps and their projects. Cope’s contribution was “sculpture and sketches of early Indian life,” but their whereabouts are unknown. 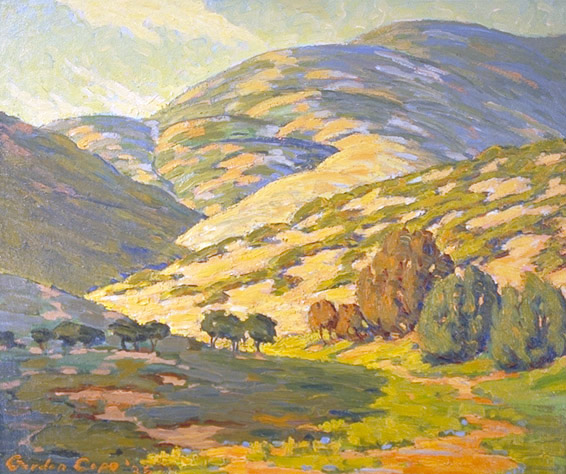 Cope’s skills as a singer were equal to his artistic skills. While in Europe, he sang with Opera Companies including performances at the London Palladium with Her Majesty Queen Mary of England in attendance. Musical talent apparently ran in the family. His brother, John Nicholson Cope, wrote and recorded sound for over a hundred films. His granddaughter, Shana Carlsen, is a professional opera singer and Warren Zevon, the late pop musician, was his grandnephew.

I know of three entertaining stories associated with Gordon Cope. Dan Burke, former director of the Salt Lake Art Center and author of the thesis and book, Utah Art of the Depression, noted a story about Cope and his colleagues as they were completing the mural painting in the Capitol rotunda. “When the murals were mounted … and the scaffolding taken down, it was discovered that a paint-stained cloth had been left on a shelf at the base of the dome. Cope, armed with a long fishing rod, spent the greater part of a day at casting before the undecorative object was landed.” 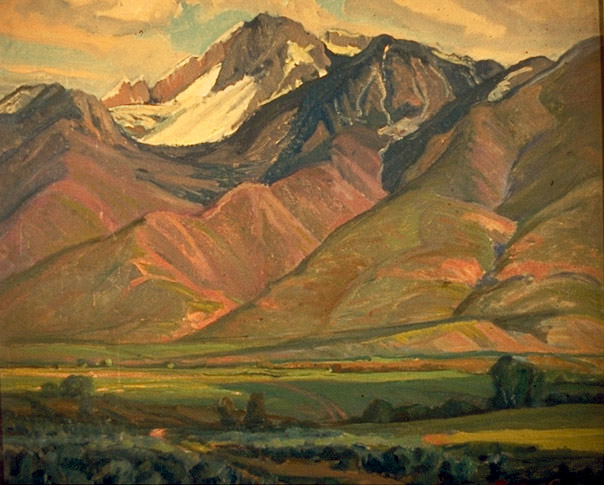 My friend, and distant relative, Adele Parkinson (Clayton Williams’ sister) told me about her experience with Cope. She reported that her mother wanted to surprise her husband with a portrait of Adele, but since Mr. Williams evidently didn’t think the family budget included such things as portraits, she saved a little money here and there so that she could commission Cope to paint Adele and present the finished product to him as a surprise. Adele walked to Cope’s home and studio on I Street once or twice a week after school to sit for the portraitist. She was 17 or 18 at the time, and said that he was very nice, perhaps partially as a result of his “always having a glass of wine around when he painted.” After a month or so, Cope completed the commission, and the large painting now hangs in Adele’s son’s home in southern California. One other tidbit that Adele offered was that she remembered that the old upscale Makoff Store on the corner of 2nd East and South Temple use to hang the paintings of some of the local artists in the tea room in their store. If you don’t see the irony, please call me. 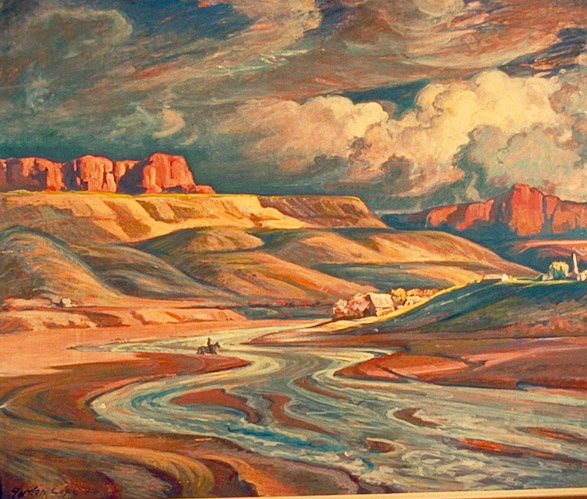 The last story was offered recently by Springville Museum of Art director, Vern Swanson, and gallery owner, Dave Ericson, at the ash-scattering of our departed friend, Bill Seifrit. Swanson posed the trivia question: “Who was it who drove A.B. Wright to the train station after he had been discovered by Mabel Frazer at the U with his model, Myrtle [for a more detailed explanation, see our January 2007 edition]. According to Ericson, it was Wright’s friend and former student, Gordon Cope, who was in the driver’s seat for the inauspicious occasion. 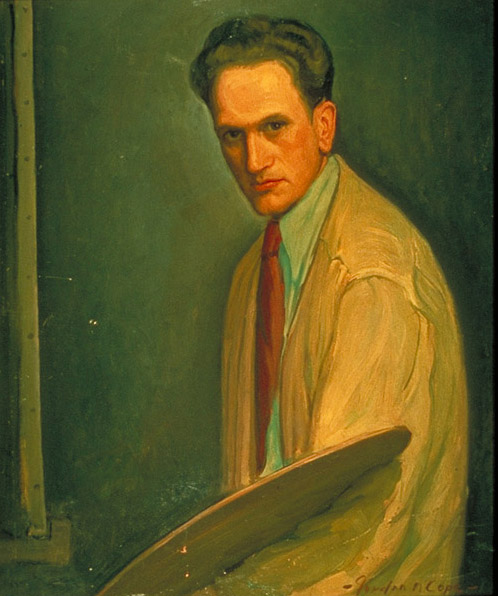 Cope spent many years living and painting in San Francisco. In addition to his many well-executed landscapes, Cope can be remembered as the artist who painted three memorable portraits (in addition to Adele’s, of course): Governor Henry Blood (supporter of the arts, the PWAP and renown art collector), art colleague and friend Ranch Kimball, and Ranch’s uncle, the crusty old Mormon iconoclast, J. Golden Kimball. The latter’s portrait, which can be found at the Museum of Church History and Art, depicts Golden in a way that seems to fully meet his quirky character so expertly imitated by the late Jim Kimball. 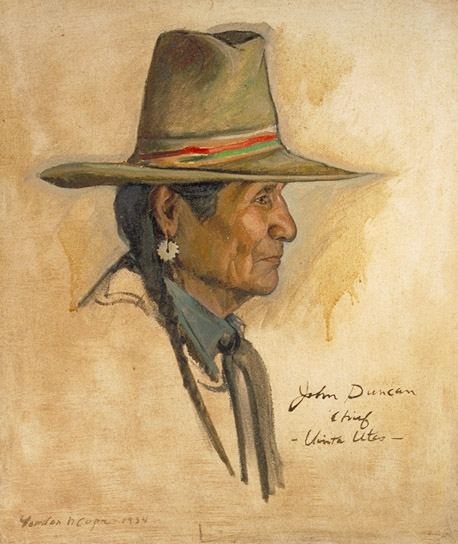 Cope’s prolific career is evident by the number of fine examples of his paintings and portraits found in government buildings, professional and business offices (Zions Bank has several well-executed works), and private collections throughout the west.

Images courtesy Utah Fine Art Collection and Salt Lake County Public Art Collection. For more information about the collections and to view more images of paintings by Gordon Cope, visit their respective websites. Though titled “Little Cottonwood,” #7 is actually a view from what is now Tanner Park in Salt Lake. 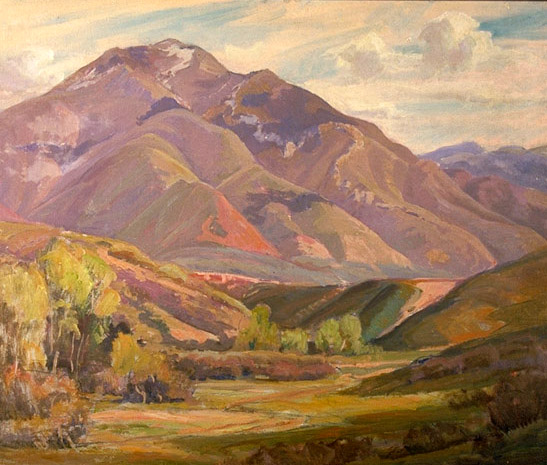