Apprehending our Fate: Colin Tuis Nesbit at the CUAC 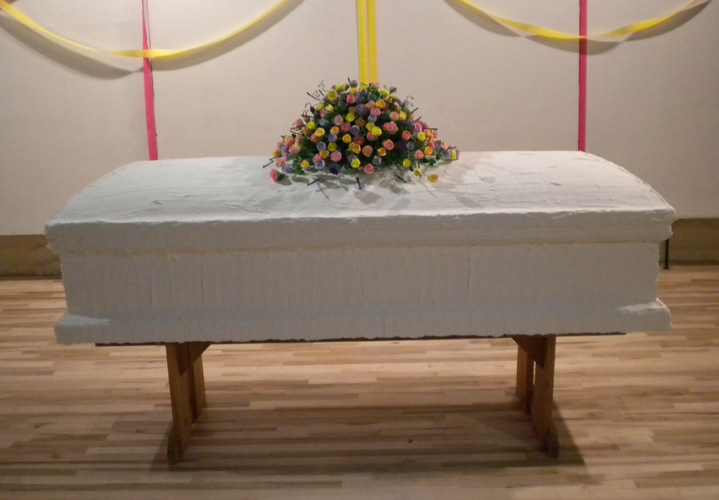 Driving south on I-15 the other day, I was mildly amused to see a billboard promising passersby that a particular obstetric clinic provides “better birthdays.” The advertiser’s attempt at wit was really just the commonplace confusion of two terms, “birthday” and “birth day.” We rarely use birth day, which refers to the day on which we were born, but commonly refer to the annual date on which we commemorate that event. On the other hand, unless we are Jewish, few of us light candles and sing songs to commemorate the anniversary of a dear ones death. This difference between the way we treat these two days, the bookends of our lives, propels Regrets Only, an installation continuing through September 8 at the Central Utah Art Center. 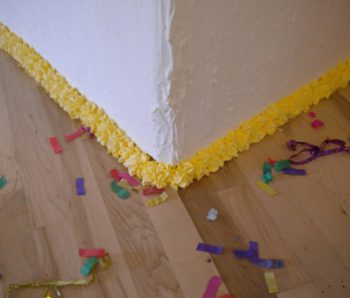 The installation begins in the Center’s front yard, where a freshly dug and re-sodded grave fills the small lawn. Standing before the white tombstone, several unsettling things gradually become apparent. First, the tombstone is also a cake, being made of white frosting decorated with extruded icing and topped with multicolored candles. As this sinks in, it becomes apparent that the grave itself — the very earth — is vibrating. Finally, beneath (literally beneath) the rumble of traffic from nearby Highway 89 one discerns the sound of music. Evidently there’s a party going on down there.

If this sounds irreverent, even a touch blasphemous, that is certainly one of the dimensions being explored by Colin Tuis Nesbit, the artist who variously drew, sculpted, hung, scattered, and dug the assorted parts of Regrets Only. Inside the gallery, on the main floor, he created another cake that re-creates the space within a grave as a solid mass, a rectangle six feet deep, seven feet long, with straight sides and a mounded top. The luscious white impasto that covers it tempts one to touch it … at least until it becomes apparent that it is the source of the sickeningly sweet odor that fills the room. Only a hundred-odd pounds of Royal Frosting could look so good and smell so sweet. Flanking this most unlikely of shaped cakes are a couple of drawn and be-glittered tombstones, walls hung with bright decorations, and, scattered about the floor, glitter, confetti, and bits of ribbon: the detritus of some very lively party.

Upstairs, standing alone at the far end of the room, accompanied only by four grim, functional chairs, stands the ultimate celebratory centerpiece: a coffin resting on a trestle, with an arrangement of edible flowers on top. Despite its frosting and colorful accent, there is something anticlimactic and even grim about confronting this final confection. We can make fun of death all our lives if we want to, but it will be waiting there when we come to take our final bow, and it will get the last laugh. 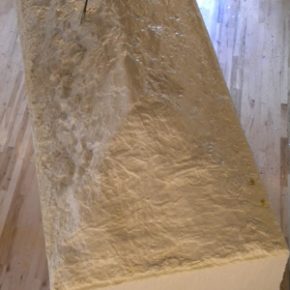 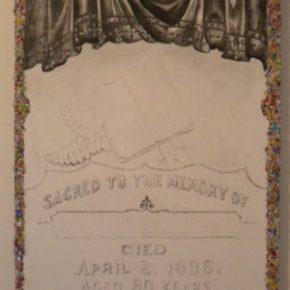 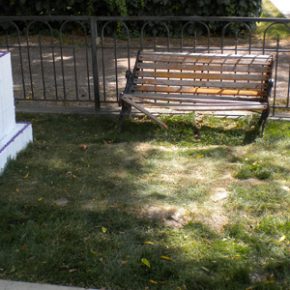 In Regrets Only, Colin Nesbit displays a remarkable range of skills, though as befits our usual expectations for an up-to-date artist, he doesn’t display an excess of facility for any of the crafts he invokes. His drawing is rough. Frosting is one thing that even the amateur chef takes on, so we don’t expect much from it; still, a first-class pastry chef would probably sniff at these rough surfaces. The arrangement of individual works within the installation is odd, leaving large areas unaccounted for. Of course many viewers will find nothing here that says “art” to them anyway — no sentimental images of meaningful cultural artifacts or familiar reassurances that all is really well — and those that enjoy the provocation will not much care about absent finesse. Thinking about death is not a subtle exercise: it’s a struggle to keep down the rising gorge of fear, to wrestle the terror of inevitability to a lifelong standoff. Groping along the line that separates what we celebrate from what we dread, Nesbit has created some visual metaphors that may not, but yet may, stimulate some new apprehension, in both senses of the word, of our universal fate.

Regrets Only, an exhibition by Colin Tuis Nesbit, will be at the Central Utah Art Center through September 8.