Several weeks ago, an invitation from the Utah Arts Council’s Rio Gallery landed on my desk for an intriguing exhibition titled This is Our Land: Discovering America & the World Through Original Illustrations from Children’s Books. And there, on the front of the postcard advertising the national travelling exhibition, was an image by local artist Jean Arnold.

I hadn’t thought of Jean Arnold as a children’s book illustrator in a good many years – nine to be precise. In 1999, I was searching for an illustrator to mentor a young woman in the Art Access Partners Visual Artist Mentoring Program who wanted to learn more about children’s book illustration. The helpful staff at Phillips Gallery recommended Arnold as a mentor, based upon her track record of illustrating a series of highly popular books dealing with Carlos, a young Hispanic boy who gets into scrapes and adventures that will be quite familiar to boys and girls 3 to 8 years old.

The culminating activity for the Partners Program each year, is an exhibit in the Art Access Gallery where apprentice artists and mentors share their work with the public. As her offering, Arnold chose to show a series of framed original illustrations from the Carlos series. They were whimsical and folkloric in nature and quickly captured my fancy as well as that of gallery-goers.

The Jean Arnold that most of us in the arts community know, recognize her as a talented artist who received her MFA in Painting in 1999 from Johnson State College, in conjunction with The Vermont Studio Center. Since then, she has built an impressive resume, including being awarded one of the prestigious Utah Arts Council Fellowships, along with David Delthony in 2002 (see 15 Bytes article). She is nationally known for her abstract drawings and paintings based on sketches done while traveling on buses.

It might be tempting to search for common threads between Arnold’s illustrative work and her fine art, which has variously been described as complex, urban/pastoral, ambiguous and semi-abstract. However, we’re talking apples and oranges here.

Illustrations in children’s books are considered successful if they become part and parcel of the narrative; if they are able to convey a sense of the story even without the text. If they do this, they are magical and the Carlos books are magical. Arnold reached back to her knowledge of Mexican and Latin American folk artists for inspiration in introducing Hispanic flavor into the Carlos books. She also conducted an extensive amount of research to provide Carlos with an accurate background for the unique Hispanic setting in which the stories take place.

It was also interesting to discover that Arnold never had contact with the Arizona writer, Jan Romero Stevens, in person. When Stevens submitted the text to her publisher, Northland Publishing, the publisher paired her with Arnold. Other than articulating a few key images that Stevens felt were vital to the narrative, Arnold was on her own. At the end of the process, Arnold and Stevens did communicate by phone.

Out of this successful partnership have come five Carlos stories, beginning in 1993. Sadly, Jan Romero Stevens passed away in 2000, effectively ending the series. Jean Arnold is now immersed in her fine art career and her book illustrations are a memory. How fortunate we are to be able to peer into this delightful period in an artist’s past. 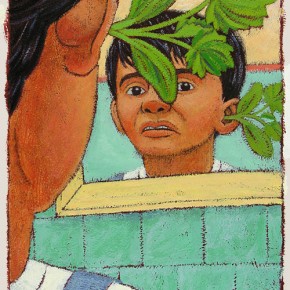 Illustration for Carlos and the Squash Plant by Jean Arnold 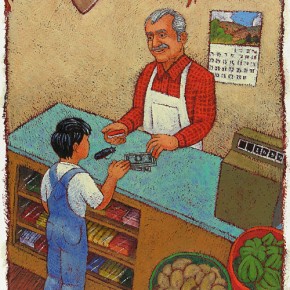 Illustration for Carlos and the Corn Field by Jean Arnold 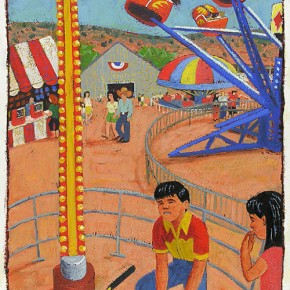 Illustration for Carlos and the Carnival by Jean Arnold 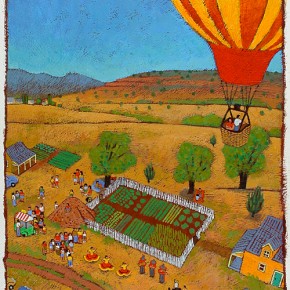 Illustration of Carlos Digs to China by Jean Arnold

The five Carlos books include: Carlos and the Squash Plant

; Carlos and the Corn Field

; Carlos and the Skunk

; Carlos and the Carnival

and Carlos Digs to China

. All are bilingual, with the text neatly divided in half on each page between Spanish and English. Each book also includes a simple recipe for food mentioned in the narrative, which children will enjoy cooking with an adult’s help.

15 Bytes readers can see one of Arnold’s illustrations hanging in the Utah Arts Council’s Rio Gallery until February 28. She is one of 80 illustrators from the United States and other countries in This is Our Land: Discovering America & the World Through Original Illustrations from Children’s Books. Viewers need not have small children to enjoy this imaginative traveling exhibition, which was organized by Meridian International and the Library of Congress.

This article is from the February 2008 Edition of 15 Bytes