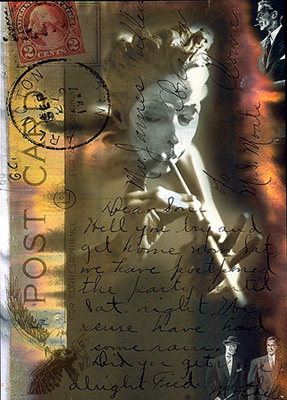 Anthony Siciliano’s evocative array of collage pieces now on display at the Atrium Gallery in Salt Lake City’s downtown library express the montage of images, both private and public, that float across the eyelids of our collective experience.

The fascination of many of the works on display lies in the sense of voyeurism that surrounds them. Anyone who has ever read the back of a postcard haphazardly left in the open, or sifted through the correspondence of a dead relative will readily recognize the allure of the various fragments of the personal used in the collages. Siciliano says the exhibit “is an extremely personal work because it depicts objects and symbols that were meant to be private: letters, postcards, handwritten notes, snapshots, doodles and personal mementos …” As mundane as a postcard may be, one cannot help but step in closer to see exactly what the few lines say. Probably written in a minute, with little care or attention, the lines of a postcard are a portal into the private world; not necessarily a private world, but the world of the private, of the intimate.

Siciliano skillfully manages the works so that they stay away from mere voyeuristic titillation and speak to a broader vision of the human. “The iconography of the past and present is meant to evoke a collective memory of culture, rather than specific personal events.” Though at times the pieces of the collage can be extremely intimate — one piece features a letter from a father to a son — the form of the message or the manner of writing do evoke a culture, a period and a place. Siciliano further elaborates on this theme with his use of figures. Whether the engraving of a medieval night, clad in chain mail and cloak, or the fifties-style businessman — with two-piece suit and Stetson — the images remind us how much an age can be evoked simply by the clothes we wear. 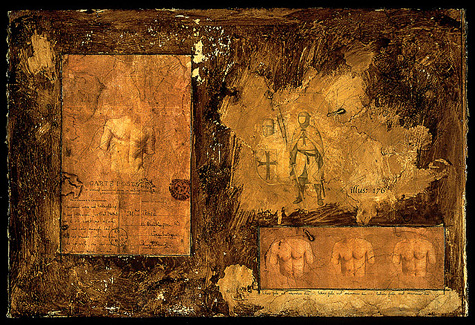 Siciliano’s use of collage is a determining element in the success of the works. In “Wish,” we are presented with the following montage: the image of a sun bather, a post card from Sacramento, and what looks like a bill from The American Hotel Amsterdam. All evoke ideas of travel, of wished destinations, of warm summer days. But this is no travel brochure. The hotel bill makes the general specific; makes it real. An actual vacation was taken; a day was spent at that hotel; expenses were incurred. The bill, however, is partly hidden, not completely readable. We cannot even be sure of the real name of the hotel. The bill is personal enough for us to feel the force of the experience, but masked enough to lend its meaning aa general quality. Overall, the piece evokes the general feeling of a wish, the unknown desires and destinations of our wishes: the feeling we have when preparing for a trip; our daydreams about what we will do compared to the actual reality of the trip.

Siciliano, an image editor at Borge B. Anderson & Associates, uses technology but is not overwhelmed by it. He uses his knowledge of photography and digital manipulation as one element in his collage pieces. The scrawl of handwriting, taken from a letter from a father to a son, floats over the presence of “Dear Son” 2001 (top). Siciliano uses technology with a restrained hand, however, and keeps the works human with the physical elements of the collage pieces. The warm yellow tones that pervade most of the works is the color of time itself, aging paper and memories.

A few of the works at the exhibit seem weaker than the whole. In these, one image or two occupy a portion of the work, but the rest is filled with a Twomblyesque scrawl. They seem a sketch, a phrase, a refrain, rather than the whole poem. Soothsaying plays an important role in another group of works. Zodiac signs and playing cards hint at attempts to tell ourselves who we are. These pieces seem to be going to the past to tell us about the present, rather than predicting the future. They shed light on the other works and the exhibit as a whole. In essence, the collages are montages of the signs that whisper to us our identity. Siciliano has rattled around in the attic of our collective past and brought back to us reflections of our present in the stars of our birth, the uniforms of our times and the personal mementos of our everyday lives.