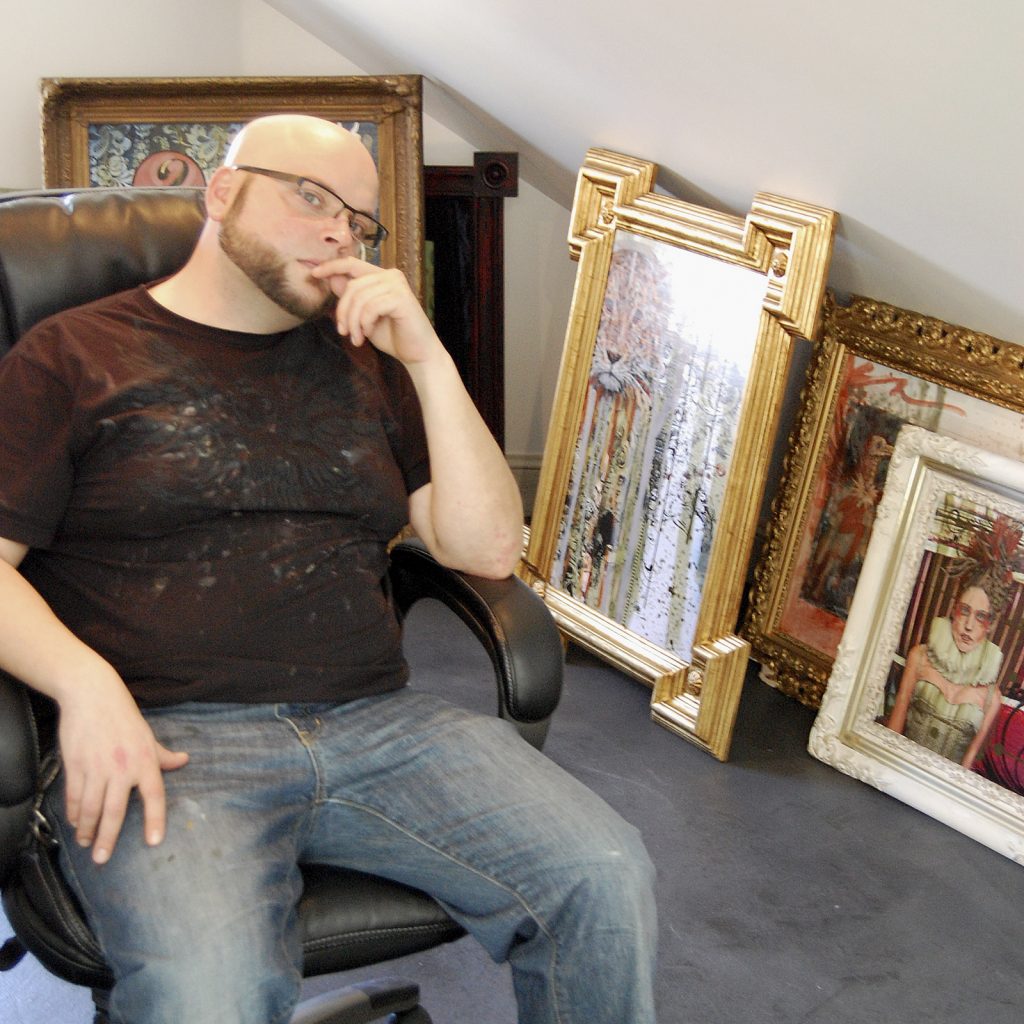 Most artists probably think about frames after they’ve completed their paintings. But not Anthony Granato. For him, the frame is a key part of his inspiration and creative process. In fact, he jokes, they speak to him, suggesting the perfect images from his storehouse of ideas.

If you go to see his work at Silver Queen Gallery in Park City, or in this month’s solo show at Utah Arts Alliance, you’ll understand the collaborative role the frame plays in Granato’s work. He described his creative process in a recent interview.

Granato clearly enjoys the hunt for frames – throughout the Intermountain West – and beyond. He finds them in antique shops, consignment and thrift stores. He leans toward the ornate, Victorian, Baroque, and Italianate frames; their dark and brooding style seems to fit his sometime dark and brooding take on the world around him.

“Usually, I have this large pile of frames and I start looking through them,” says Granato. “My girlfriend and I joke that the frames are talking to me.” One speaks, and he measures its dimensions, then sets it aside.

Granato then assembles a composition compatible with the frame. He usually begins with his own drawings and photographs, but as in some of the works at his current exhibit he also uses appropriated images.* He brings these into Photoshop and incorporates textural images, which he finds, for example, in tree bark and in the rusty automobiles in a friend’s auto graveyard. When he’s happy with the composition, he prints it on high quality photographic paper using a photographic process. He adheres the photograph to gatorboard and coats it with several layers of acrylic matt medium. This becomes his underpainting. 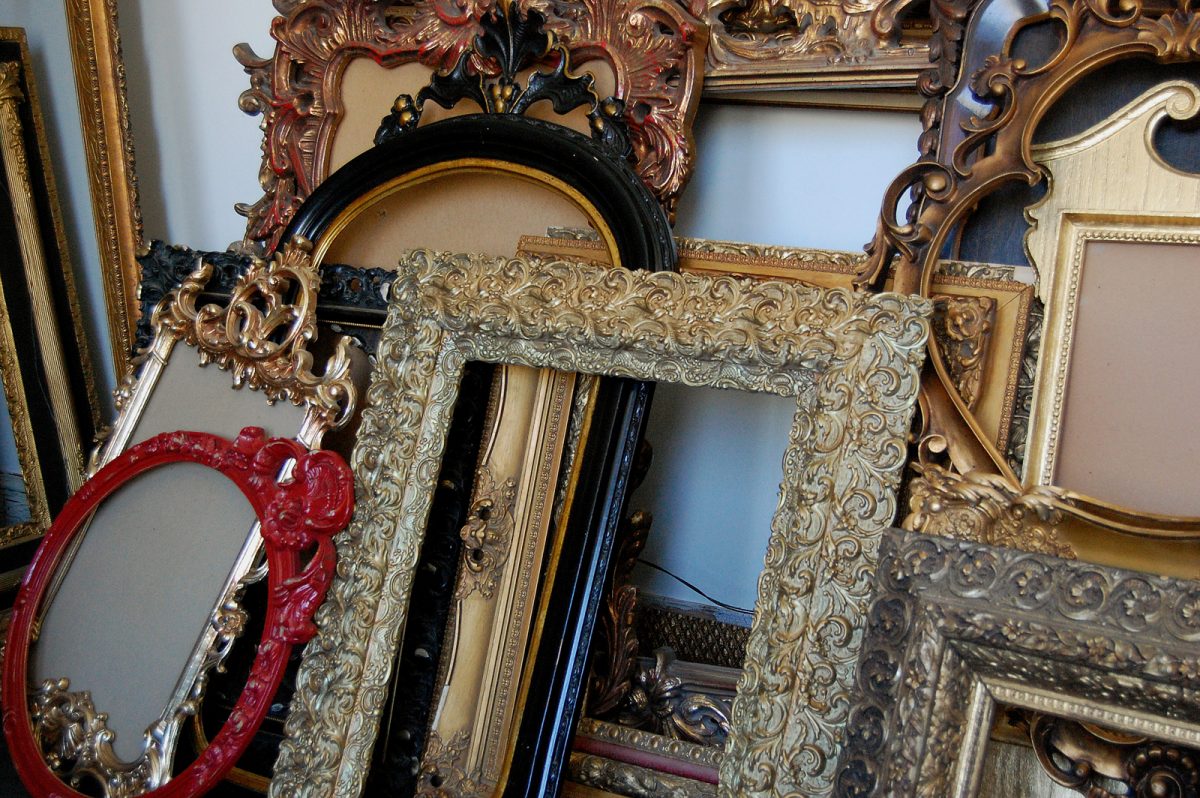 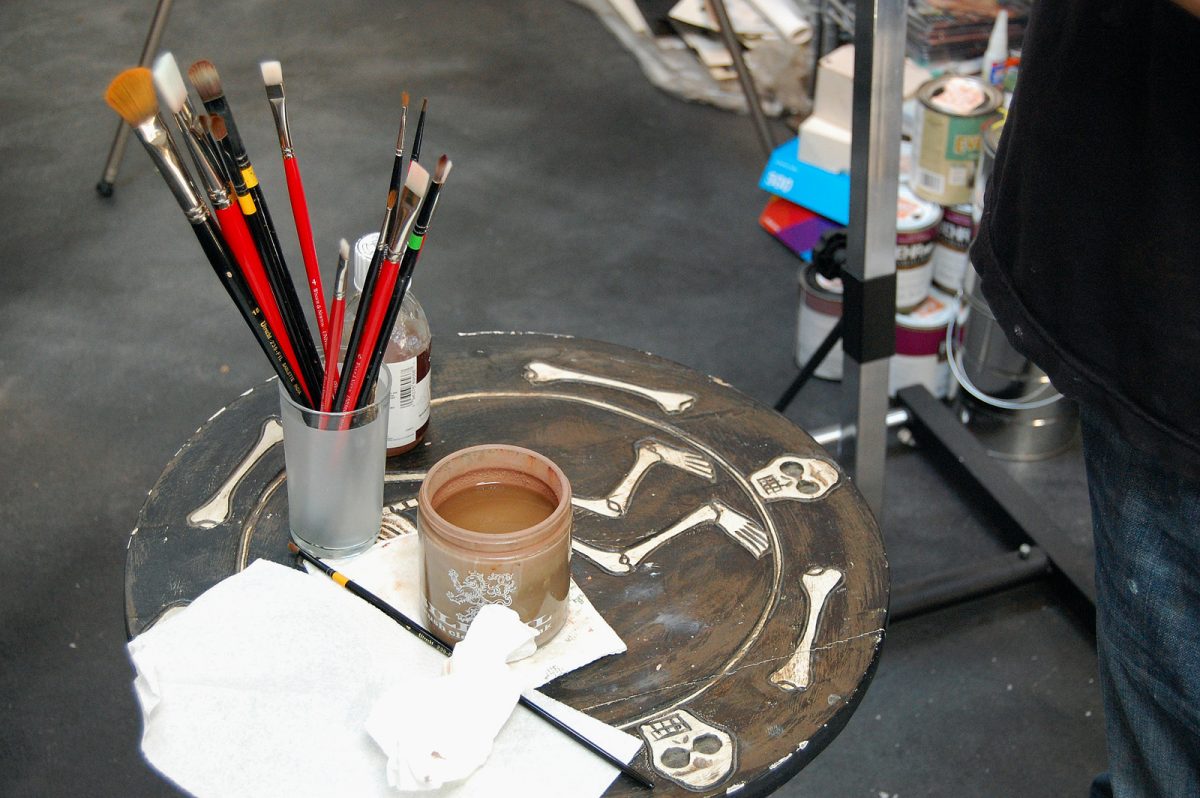 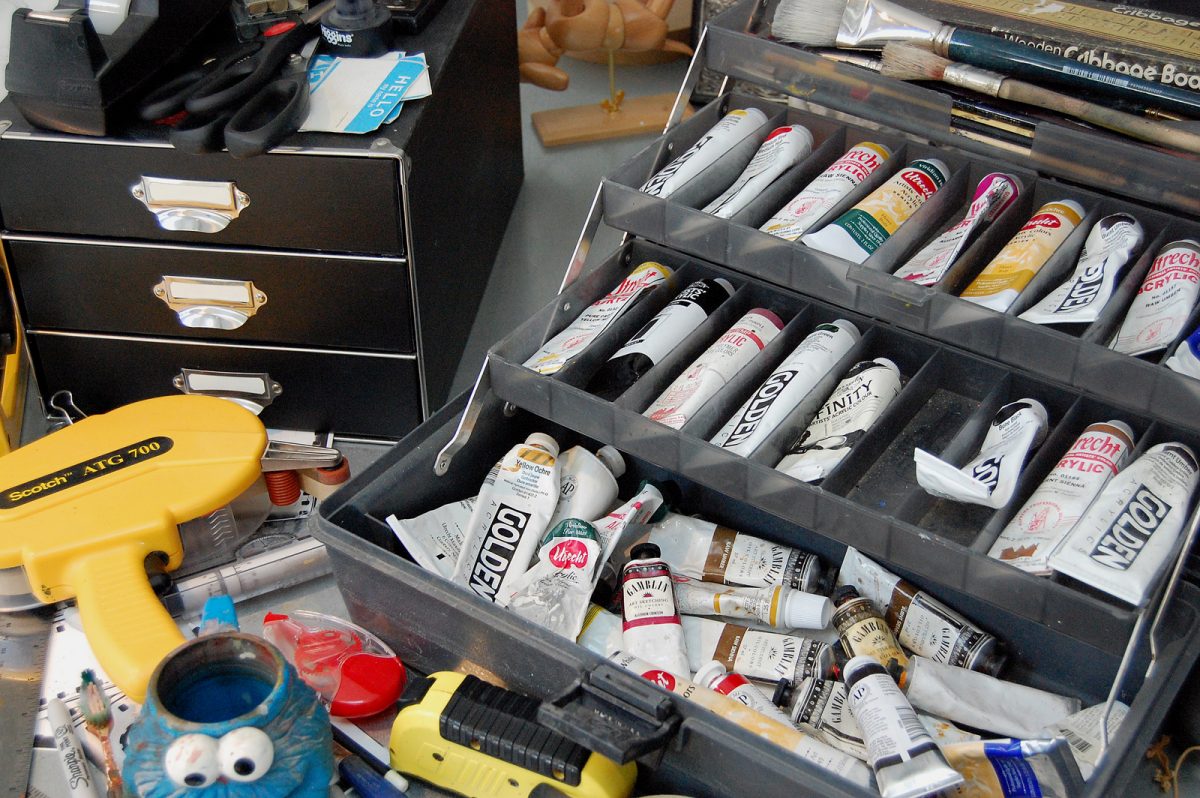 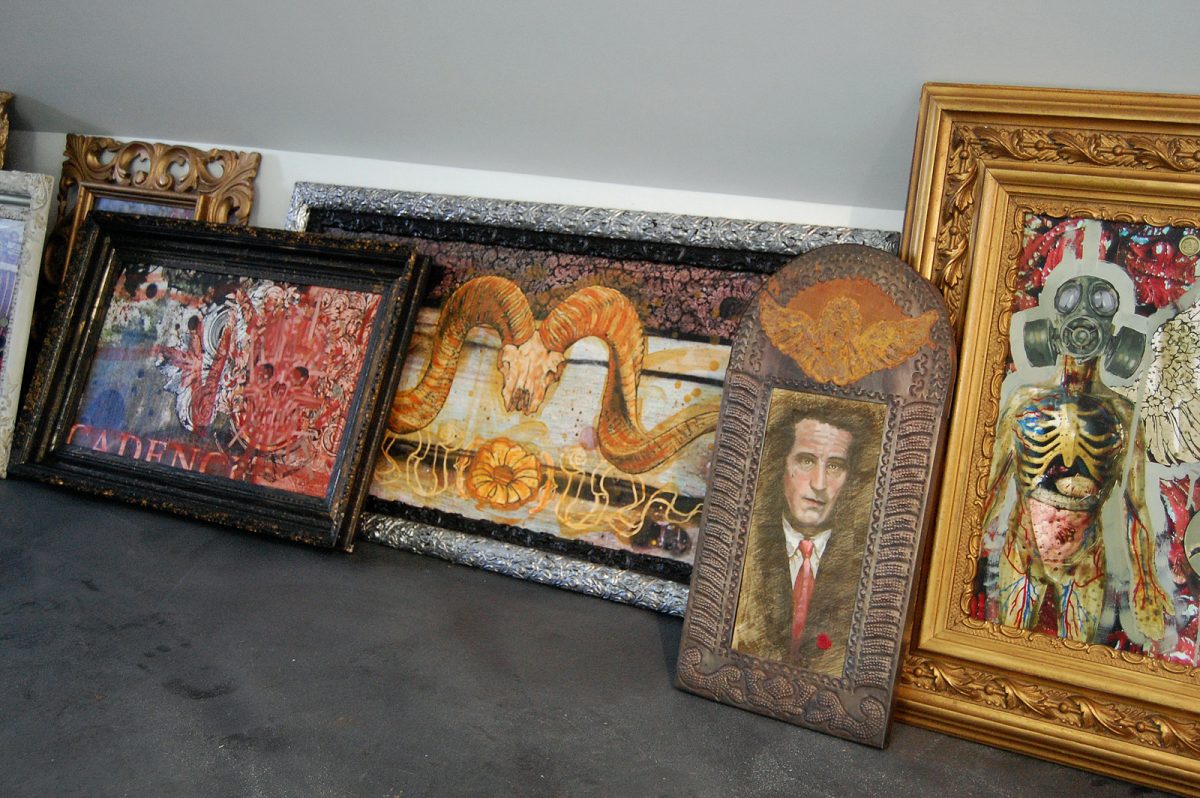 The images he uses are inspired by his view of the world around him – injustice, oppression, the way people watch too much television. Or he plays with visual dichotomies, juxtaposing images representing different ideas that don’t go together but somehow make a thought-provoking painting. He frequently incorporates a gas mask “because I like the concept of shielding yourself from poisons or anything negative around us,” he says.

When the matt medium-coated underpainting is dry, Granato begins layering color, starting with transparent acrylics used in a loose improvisational way. His final layer is oil paint, applied in a thicker, more realistic style to the area of focus in the painting. The completed painting is covered with a clear coat of Liquin, and it’s ready for the waiting frame.

Mixed media work is not new to Granato. He majored in illustration at Pacific Northwest College of Art in Portland, with a double minor in graphic design and painting. He then worked as an illustrator for about 15 years, often using mixed media processes when it fit the client’s needs. After leaving the design/illustration business behind and becoming a full-time fine artist, Granato played with and perfected the mixed media layering process he uses today.

Later this year, Granato hopes to take his hunt for frames to the East Coast, where he expects to find different styles, materials, and new inspiration for his next series of paintings. 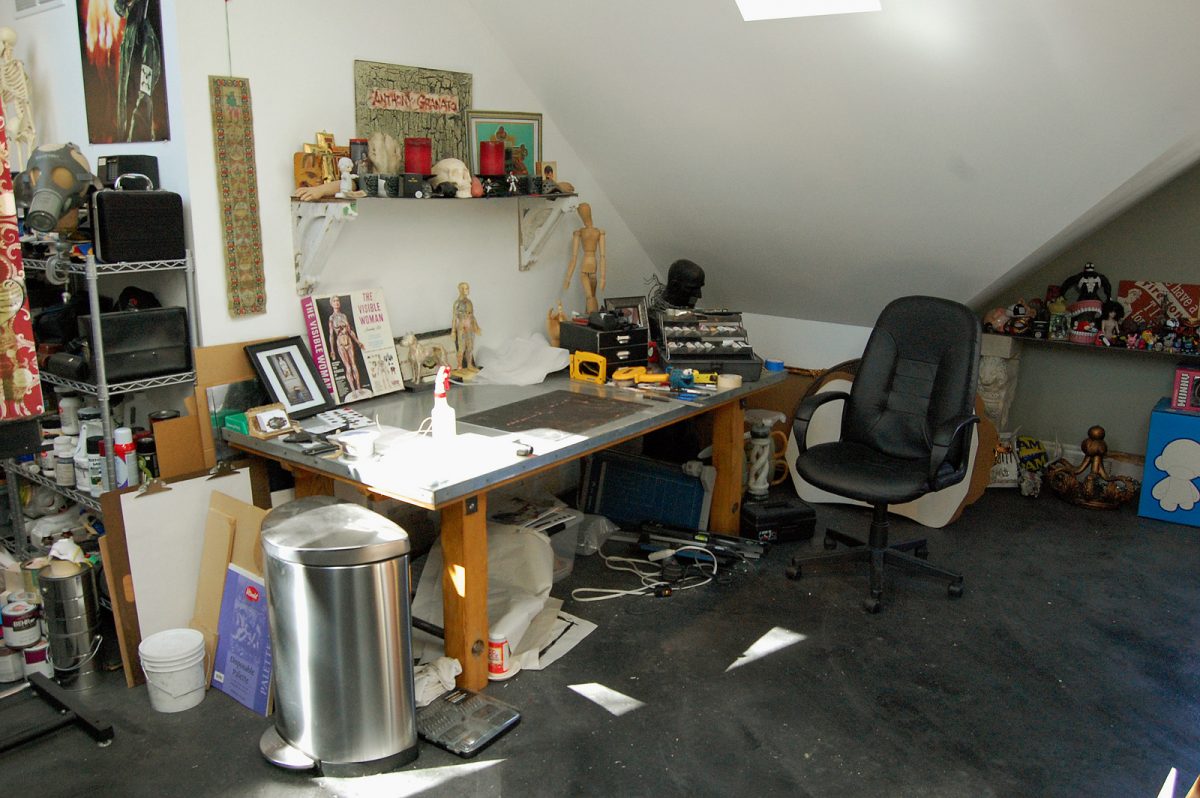 Anthony Granato – New Works
is at the Utah Arts Alliance through April 30. A reception will be held April 15, 6-9 pm. You can see more of the artist’s work at anthonygranato.com.

*Do you know when appropriation is and isn’t appropriate? In preparing this article for publication we discovered that our planned lead photograph, depicting the artist in his studio, also showed a painting that prominently uses an image appropriated from the work of local photographer Zuzanna Audette. Since Audette had not given permission for this usage we put the two artists in contact with each other to discuss the matter. We think the discussion — about the aesthetic and legal ramifications of appropriation, fair use and copyright — is one our entire community should engage in. We can begin on Saturday, April 9th at a free workshop provided by Utah Lawyers for the Arts at the Salt Lake Art Center. From 1-4 pm they will discuss Essential Law for Visual Artists. We will continue the discussion in 15 Bytes.