Another Language Performing Arts Company continues to push boundaries and redefine theatre. Think back to geometry class and mapping points on a grid. The x-axis runs horizontally and the y-axis runs vertically. It’s a two-dimensional plane. But then there is the z-axis, a visual representation of our three-dimensional world. These coordinates inspired the name of Another Language’s latest telematics cinema project, XYZ, which is a 3D digital-poem and explores the reasons people are here on Earth. “It’s about existence. Why are we here, what is life all about, what’s the point, what does it mean, did we come from someplace else?” says company co-founder Elizabeth Miklavcic. 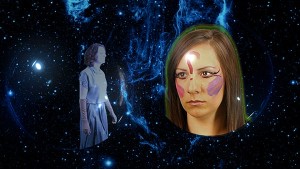 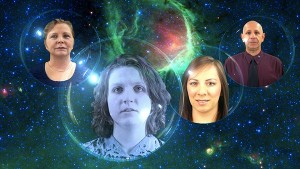 Miklavcic initially developed the concept when she woke up from a dream in the middle of the night. She immediately started writing and continued for the next 3 hours. A year later, XYZ is ready for the stage. People in the audience will wear active stereoscopic glasses, enabling them to see the performance’s 3D projections. “What it does is add a sculptural process to what we’re doing in terms of video. It’s no longer height and depth, you now have the illusion that you see the third plane,” says company co-founder Jimmy Miklavcic.

Through the three-dimensional performance, delivered as a poem, Another Language will tell the story of four entities who come to Earth and offer monologues about the larger theme of our role here. Gaia, or Earth, performed by Elizabeth, will start the show with a live opening monologue. The entities that come to visit appear as 3D video, and the performance ends with another monologue by Gaia. All the while, Jimmy will be in the back of the VisLab running the computer and making the digital effects come to life as they enhance the poem about Earth.

“We’re all in this boat together, we’re all on this Earth that needs to be taken care of and we also need to be aware that what we do as humans can create life or create destruction,” Elizabeth says. But the piece will raise more questions than it does answers. “This piece is pretty abstract, abstract art, in which every viewer gets something different out of it. We are not setting one specific tone and everyone is going to walk away with different feelings depending on their experience,” Jimmy says.

For more information about Another Language, check out the video piece we did in our February 2012 edition.

XYZ can be seen on February 22nd and 23rd at 7pm or on the 24th at 4pm. Performances will also be held on March 1st and 2nd at 7pm or Mach 3 at 4pm. Tickets cost $7 for general admission, $5 for members and seniors, and admission is free to students from any school (with ID). Purchase tickets online or over the phone (801) 531-9419. The performance lasts approximately 25 minutes and will be followed with a discussion facilitated by Elizabeth and Jimmy.

Tagged as: Another Language