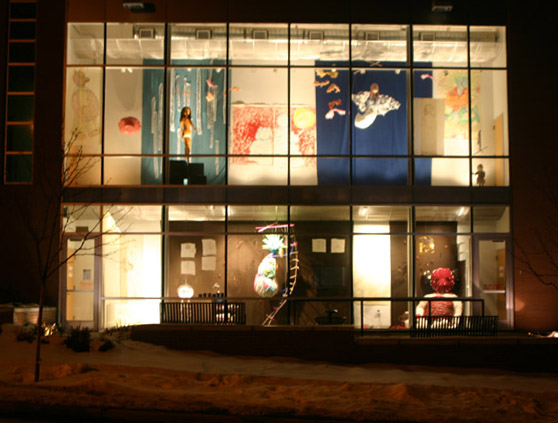 Places, a space-breaking exhibit by local artist Anne Watson, has been startling drivers and strollers along Salt Lake City’s 17th south for the past month. Watson has birthed a new exhibition space by using the glass-encased alcove’ on the north side of Westminster Colleges Emma Eccles Jones Conservatory for her most recent installation. Two stories tall and about four feet deep, the installation space remains relatively innocuous during the glare-filled day, but at night becomes an imposing two-story diorama. This is not the first drive-by space in Salt Lake; Don Brady’s gallery in Foothill has been there for years. But Watson’s exhibit is something entirely different, not simply an alternative space to show paintings, but a world unto itself.

Watson’s installation consists of a variety of “puppets” placed on both levels of the space, along with drawings, backdrops, preliminary sketches and photos, the tools of her puppet-making trade, and a video running on a loop. On the second level, puppets of an angelic figure and young girl are suspended in the air like marionettes. Below, the puppets are more earth bound: a giant teddy bear relaxes in the corner and another multi-colored puppet scales a ladder to the second level. Behind the stage setting of Places is an actual, unseen stage, the Dumke Student Theatre; and Watson’s puppets, while they seem to be lying about, ready for use on the stage behind them, are actually in the process of creating their own narrative for the larger world. 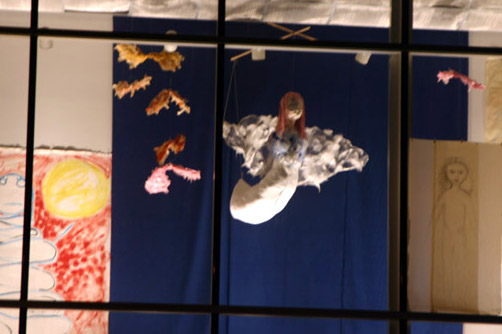 Watson’s interest in narrative began emerging in her works after her return to Utah in 2002. A native of Salt Lake, Watson spent close to twenty years in New York working as a director, writer and producer of documentaries and biographies for television. She has always had an interest in writing, both fiction and non-fiction. In college, she studied with James Baldwin, and while in New York did journalistic work for the Village Voice and the Nation. But including the “word” in her visual work was not immediate. “ Over the years,” she says, “I have mustered the courage to put the word into my work – following after one of my all-time favorites, Cy Twombly – first in my paintings and later in other ways.”

One of those other ways is in the form of Corinne, the central figure in the Places exhibit, who has been in Watson’s imagination for over a decade and began to emerge in drawings after Watson finished her I’ll Never be so Far Away installation in 2003. Since then, Corinne has come to life in Watson’s writing and as a three-dimensional trickster. “The marionettes or tricksters or puppets became a storytelling vehicle, “ she explains. “In their case, they are often telling me back the story. In other words, Corinne, the puppet center and front of the “Places” exhibit, has a voice of her own and speaks to me, much like Pippi did” (referring to Watson’s exhibit at Art Access gallery in 2005 that used a Pippi Longstocking character as the vehicle for her storytelling). 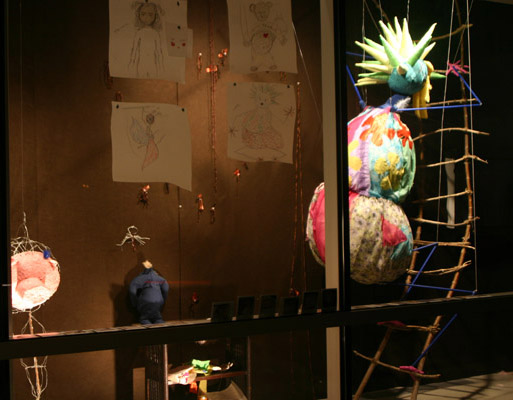 In Places, Watson has continued her interest in narrative with a keen imagination attuned to the specifics of her installation site. The space’s setting, behind glass, facing north to the outer world, creates a unique environment for Watson’s narrative. During the day, the space reflects back the world it looks onto: a small suburban home on the first level, and a towering tree and sky on the second level.|3| Watson says these are important reflections of the installation’s theme of “place,” of the earth and air and our suspension between the two. The windows also reflect the viewer, who during the day must step close to the glass to see past the glare at the exhibition inside. In the process, the viewer sees their own reflection become part of the exhibit.

At night, the exhibit takes on a completely different aspect. The space is brightly lit catching the eye of a night driver or staring down at the passerby on the street. The space becomes a stage, or if one concentrates on the grid structure holding the glass together, a multi-screen television in the living room of the outside world.

This dual aspect of the exhibition is the setting for the unique narrative that Watson choreographs in Places. “There is a story told in the exhibit,” Watson says. “It has to do with life, death, the in-between and some very complicated characters who are in the ‘play.’ There are references to children who have been forced into wars, to women who have been abused, to men who abuse, to people who answer dreams and provide safe harbor, to ghosts and angels.” The video element of Places sets the tone for the dynamic tension between the brighter elements of the puppet world and the darker stories referenced. In the video, a young girl, dressed as an angel, in pink and with wings, skips about an urban setting completely foreign to and oblivious of her innocence. The text of T.S. Eliot’s ominous “The Hollow Men” scrolls over the visuals.

Like the brightly lit nocturnal incarnation of the exhibition, Watson says that in her own mind the actual story is quite clear and specific. But if viewers do not see the story that she has, if they look at it, like its daytime incarnation, through glare and their own reflection, she is happy for them to find a story that suits them. 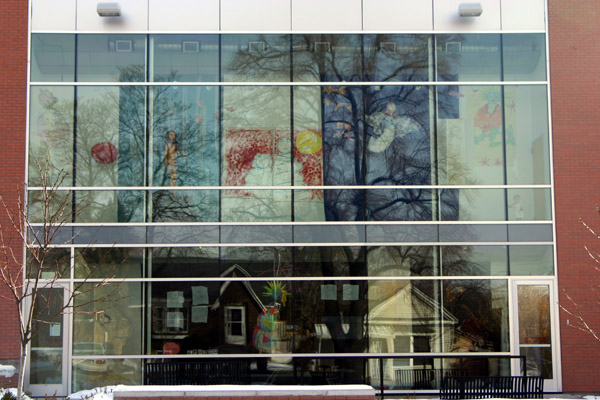 Places continues through the month of March. It can be viewed on 1700 South between 12th and 13th East in Salt Lake City.