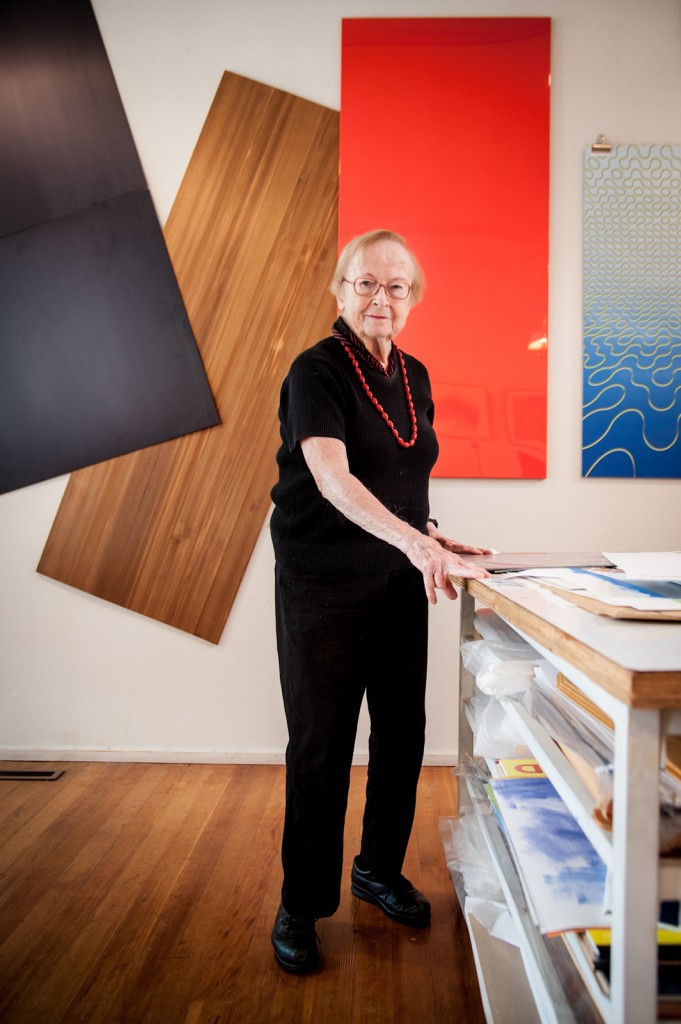 Anna Campbell Bliss at The Leonardo in 2013. Photo by Zoe Rodriguez.

Salt Lake City artist and architect Anna Campbell Bliss just got a fine surprise: a major honor is coming her way in December when the Inter-Society Color Council (ISCC) presents her with its 2015 Godlove Award. It is the most prestigious award bestowed by the Council and celebrates long-term contributions in the area of color.

The ISCC, principal professional society on the field of color in the United States encompassing the arts, sciences and industry, is paying tribute to Bliss “for her lifetime achievements (over 5 decades) in the areas of color, art design, computer modeling and their interactions,” according to a press release. “She has had a profound impact on the color and design world through her explorations of the connections between poetry and mathematics, nature and the constructed environment. As an artist/designer, Anna is unique because she is a pioneer with computer modeling to create shapes, colors and patterns that we have never seen in design spaces before. “

The award will be given by Dr. Ellen C. Carter, editor at Color Research and Application, who is flying from the East Coast for the invitation-only event at Bliss’s cozy West-side studio on Dec. 5.

Speaking with 15 Bytes this week, Bliss emphasized that her initial forays into color were in the field of architecture, first evidenced as a graduate student when she was asked to step in on a Beth Israel Hospital project in Boston. “They were going to paint the interior what we called ‘IRS Green’ back in those days,” she recollects with a smile. “And the administrator, a woman, wouldn’t have it. She clashed with the architect, and he asked me to take over.” Bliss made a name for herself by blending a variety of calming colors and forms into the new facility. Other hospital projects followed, all requiring her principled sense of color and its effect on the patients and staff.

After earning a bachelor’s at Wellesley College in Art History and a Master of Architecture from Harvard’s Graduate School of Design, Bliss studied color theory and design with Gyorgy Kepes at MIT and with Josef Albers.

Her artworks are in such collections as the Metropolitan Museum of Art, the Chicago Art Institute, the Utah Museum of Fine Arts and galleries in Europe and Tokyo. She has participated in computer design exhibits at the Stuttgart Design Center in Germany.

In 1989 Bliss created a mural for the Utah Capitol building titled “Windows” and did a large computer-assisted mural for the Salt Lake Airport in 1996 called “Discoverers.” “Extended Vision” (2001-03) was commissioned by the University of Utah for the Cowles Mathematics Building and a later project (2011) is installed at the U’s Nursing Building. St. Thomas More Catholic Church in Sandy contains another site-specific work (“Light of Grace,” 1993). The artist is the subject of a documentary film, “Arc of Light,” by Cid Collins Walker.

Her artwork currently can be seen at the Nora Eccles Harrison Museum of Art in Logan through Feb. 28, 2015, in a show entitled Relational Forms: Robert Bliss & Anna Campbell Bliss. Architect Robert Bliss, her husband of 64 years, designs contemporary furniture.

Earlier this year she was honored by Artists of Utah as one of Utah’s 15: The State’s Most Influential Artists.

Established in 1956 in memory of Dr. I.H. Godlove, the ISCC color award is usually, but not necessarily, presented biennially in odd-numbered years. It is being given to Bliss “for her years of dedication in developing her innovative art/design/computer work advancing the color community into the 21st century.”

The ISCC is the U.S. member of the Association Internationale de la Couleur (AIC).