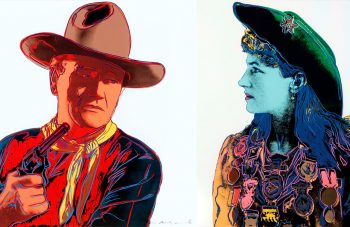 Andy Warhol was the undisputed leader of American pop art, a movement characterized by artists’ use of household items, advertising images, other “low” art forms, and commercial printing techniques in an effort to democratize art. Warhol had a tremendous gift for understanding the myths of the Baby Boomer generation. His ability to identify images that expressed the essence of the Boomers can be seen in his early work in the 1960s, including Soup Cans and the Elvis Presley series. The Cowboys and Indians series, Warhol’s last major project before he passed in 1987, pays tribute to the archetypal symbols of a popular, romanticized version of the American West. Distilling an ocean of imagery down to ten prints, Warhol challenged the meaning of playing “Cowboys and Indians” in American media culture.

Warhol initially selected 14 images to make trial proofs, but contractual arrangements led him to change his selection. This was the only time Warhol tested more than the ten images he included in a final edition. Andy Warhol: Cowboys and Indians will feature the full portfolio plus four additional trial prints. These images combine iconic portraits and totemic images, traditional and new Western representation using modern reproduction methods. Now iconic itself, the Cowboys and Indians series is a time capsule of America in the 1980s, when we had a cowboy in the White House. Only 250 copies of the portfolio were printed.

Despite the beliefs of many in the art community that mainstream modern art is the direct antithesis of what has come to be known as Western art, Warhol’s Cowboys and Indians suite links the two art genres in a new aesthetic. Rejecting the abstractness of modernism and embracing a more traditional representational approach, Warhol and the pop art movement established a link to Western art and its use of icons and, in so doing, helped reestablish respectability for representational art among contemporary collectors.

About Southern Utah Museum of Art

Southern Utah Museum of Art, on the campus of Southern Utah University, features the artwork of regional artists known for their landscapes, faculty and student artists from the SUU Department of Art & Design, as well as emerging and distinguished artists from around the country. Strengths of the nearly 2,000-object permanent collection include the body of work by Jimmie Jones that exemplifies his notable career in the regions, as well as a robust collection of prints featuring well-known artists such as Pierre-Auguste Renoir, Salvador Dalí, Katsushika Hokusai, Thomas Hart Benton, and others. Part of the Beverley Taylor Sorenson Center for the Arts, which also includes the Utah Shakespeare Festival, SUMA is free and open to the public.