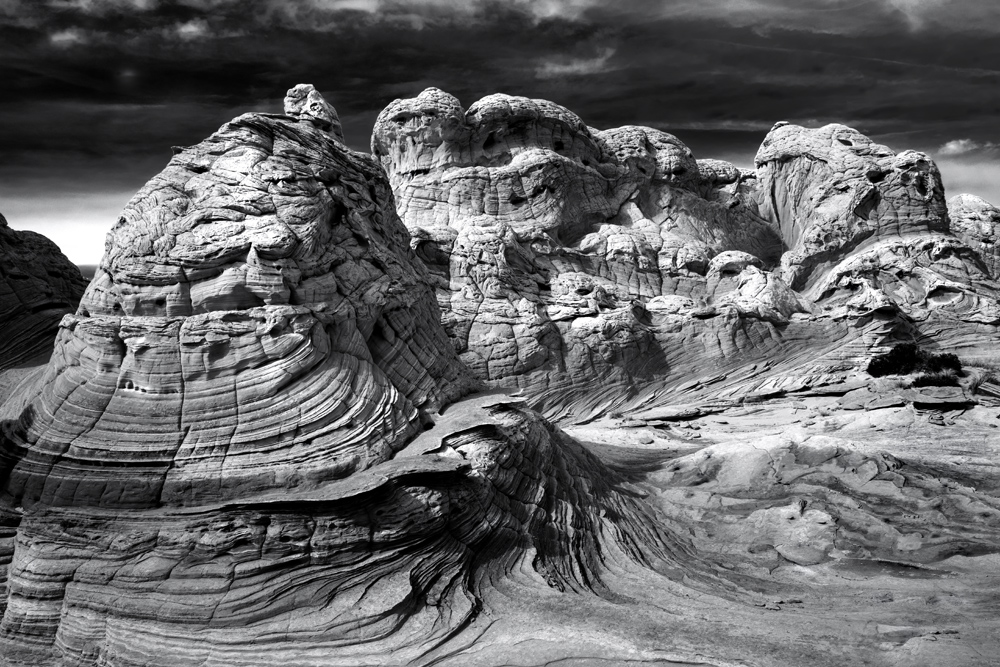 Badlands. The word itself evokes images of dry, barren deserts.  A place where crops wither in the heat, and sculptured sandstone flows from one end of sight to the other.  An inhospitable landscape, with towers of rock balancing precariously, holes carved through them by wind and weather. A place where Andy Nasisse, studio artist and professor of 30 years, now retired, sees life in the stone.

From September 23 to October 31, at the new Southern Utah Museum of Art, Nasisse’s sculpture and photographic manipulations will be presented together to the public for the first time.  The show, Badlands, has been years in the making.  Nasisse’s sculptural work began when he was in graduate school at the University of Colorado. As his career progressed, though he always had an interest in photography, Nasisse found that his work teaching ceramics as a full professor at the University of Georgia took up too much of his time for him to delve deeply into the commitment of photography.  That all changed when he began rock climbing in 1990. Nasisse found that he “…would be climbing rock faces, and literally climbing rock faces. I kept seeing all these wonderful figures and faces in the rocks, so I started taking pictures of them just for fun.” Digital photography made it easier for people to see his work, to draw similarities between his photography and his sculptures, and a connection between his sculptural and photographic interests was forged. 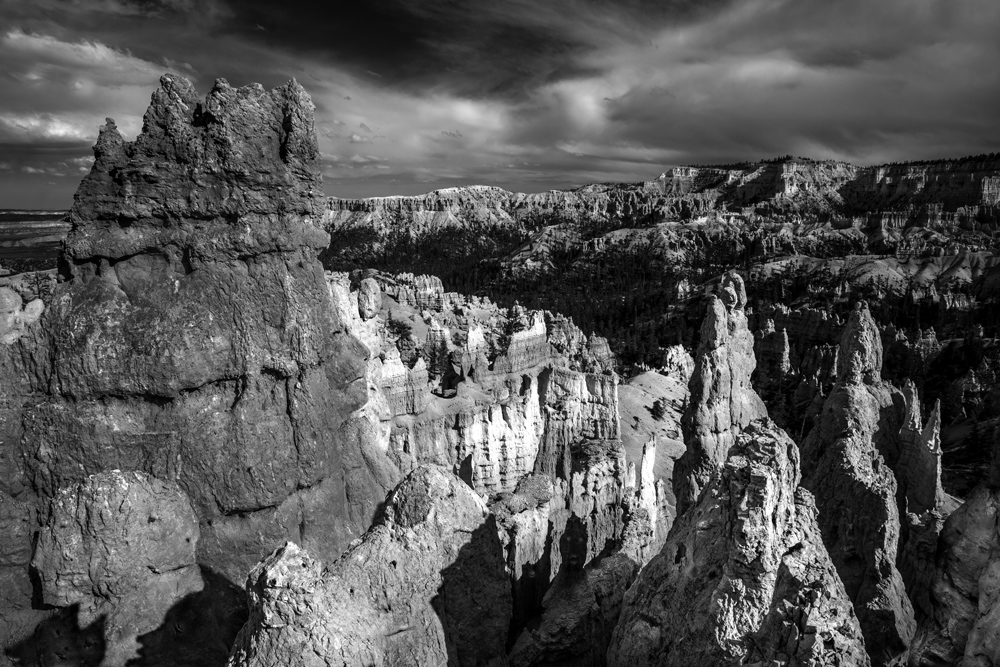 After he retired and moved to Utah, Nasisse decided to make the commitment, spend the money to get started, and become serious about photography.  The first step on his journey was to decide what he wanted to pursue through photography. “I had to go back and re-look at a lot of black-and-white photographs and decide… I wanted to reference classical landscape photographers like Ansel Adams… these people who really pioneered black-and- white landscape photography and were known for these full value, rich, beautiful, luscious black-and-white photographs.”  He did not want these inspirations to be the standard to which he held himself, but instead wanted them to be references that he had in his work.

At first glance, Nasisse’s photographs seem to be just that—images of landscapes cast dramatically in black and white, the crevices and curves of the rocks standing out in sharp contrast. To Nasisse, “it is important that you see it as a picture first, and slowly, as you stand in front of it, the other things start to come out.”  Every inch of his photographs has been addressed. To him, they are no longer simply photographs of landscapes. “With the photography, I do so much manipulating that I don’t really think of them as photographs anymore. I think of them almost as drawings.  I want people to see them as manipulations.”

It is easy to see why he thinks of his work this way – as you spend more time looking at the images that he has created, you begin to see details, faces, and the figures that Nasisse saw when he first took the photograph.  The images draw you deeper into the landscape, ask for you to search for and discover what has been hidden within them.  These are not simple pictures of rocks, arches, and undulating sandstone. 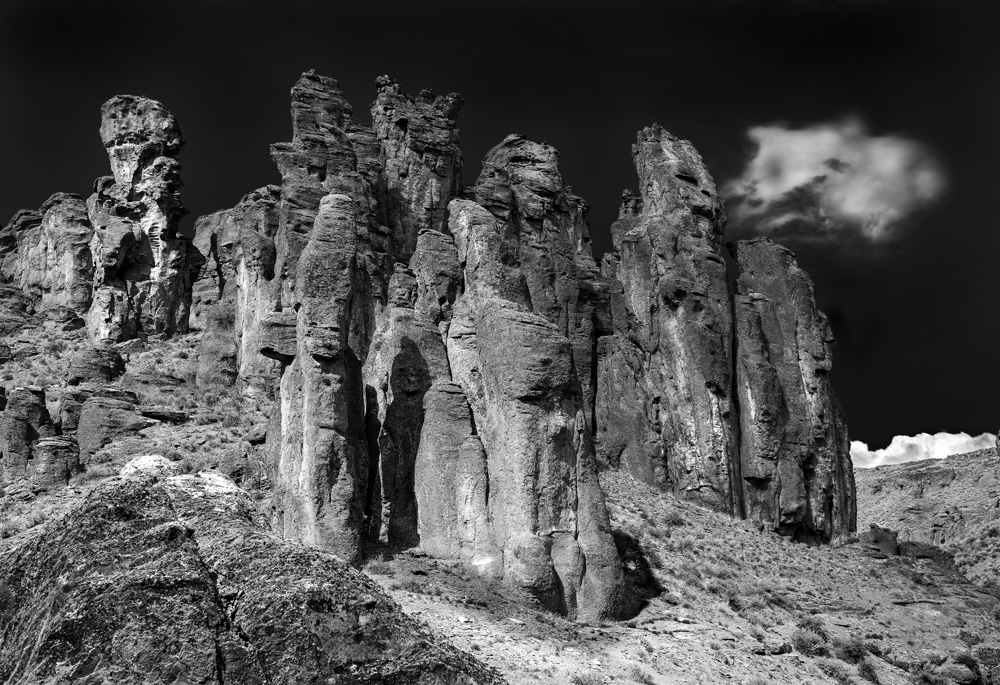 These are figures with expressions, personalities, and stories.  This is what Nasisse discovers during the two to three days it takes him to shoot the photographs that he will later manipulate.  He always finds “a major image that you can see,” a reason that he took the picture, but upon looking closer, the landscape comes to life.

A significant part of what draws Nasisse to the land is that “anybody who walks through those landscapes experiences the same things. It could be a 600-year difference, but the landscape hasn’t changed that much in 600 years. All around are these rocks that look like figures.”  The fact that he could walk through the land and see the same thing that Native Americans had seen long before him proved that there is more to the land than some simple geological formations that might look interesting on camera, and Nasisse manages to capture that in his work.  He drew inspiration from the names that the Natives of each area had given to the places. One such example is the name that was natively given to Bryce Canyon, before we had known it as such.  The name meant ‘red figures.’  In this way, Nasisse felt connected to the Natives, realizing that they likely saw the same things that he saw when they looked at the land. 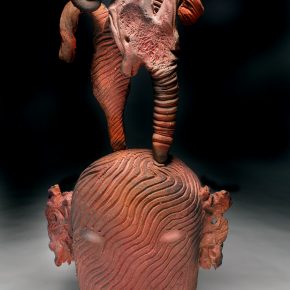 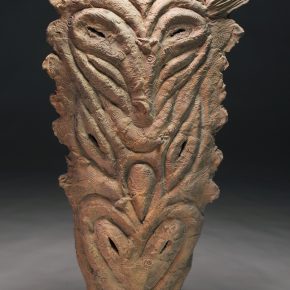 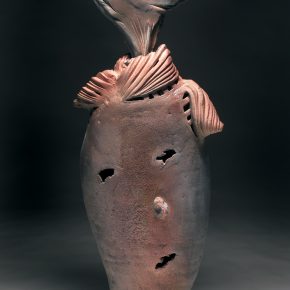 In both the improvisational nature of his sculptural work, and the meticulous attention to detail of his photographic manipulations, Nasisse finds the life in the object and brings it to the surface. He finds that when he works with clay, though he has an idea and often makes sketches of what he wants, “everything changes, and [I’m] responding to what happens in the moment. It’s improvisational, and spontaneous, and fairly unplanned.”  Though he has never before displayed his photographic work at the same time as his sculpture, he thinks it will create an interesting dialogue because of the similarity of the images on the surfaces of his sculptures to what he creates with his photographs. The twisting lines in the sculpture “Twin Towers” might have been lifted from the surface of the photograph “Howling Hills.” In “Deep Sleep Canyon,” the faces are more overt than they might be in the photographs but both they and the crown above them have the feel of wind-eroded sandstone. 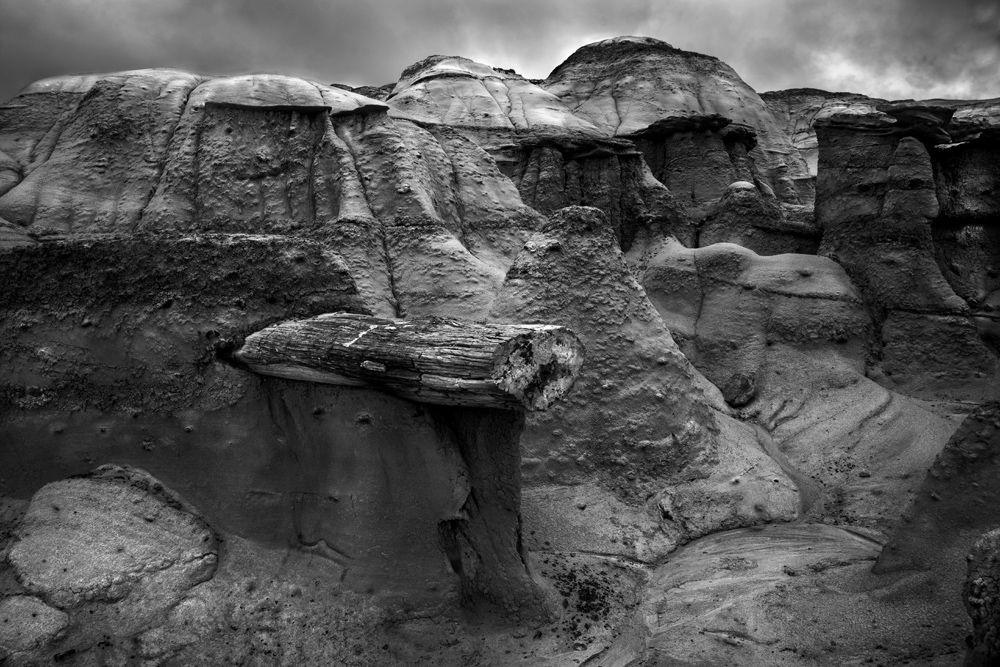 Even the titles of Nasisse’s work reference his belief in the power of objects, and the connection between Native Americans, the land they knew, and how it is the same land that we can see around us.  Some of the titles that he chooses reference specific Native things, such as “Kachina,” which is a deified ancestral spirit of the Pueblo people, or Petroglyph. At the core of his work, however, is his belief “in the everyday object, the presence and life in inanimate objects.”  Every piece that he creates has its own life, and its own story. “In fact, that’s the bottom line with me.  If I buy something or I make something, it has to have life.  You have to feel it and sense that there’s some living energy, some kind of life, some presence.”  This is a concept that is absolutely apparent throughout the work presented in Badlands.  Every piece is alive, the figures interacting and weaving intricate dialogues through the presentation of sculpture and photographic manipulations.  There is no dead space in the show.  In this way, and in many others, Nasisse counteracts the archetypal ideas that the word badlands brings to mind, and instead shows that even in the most barren places, life still hums beneath the surface, waiting to be seen by those who take a moment to look a little closer.