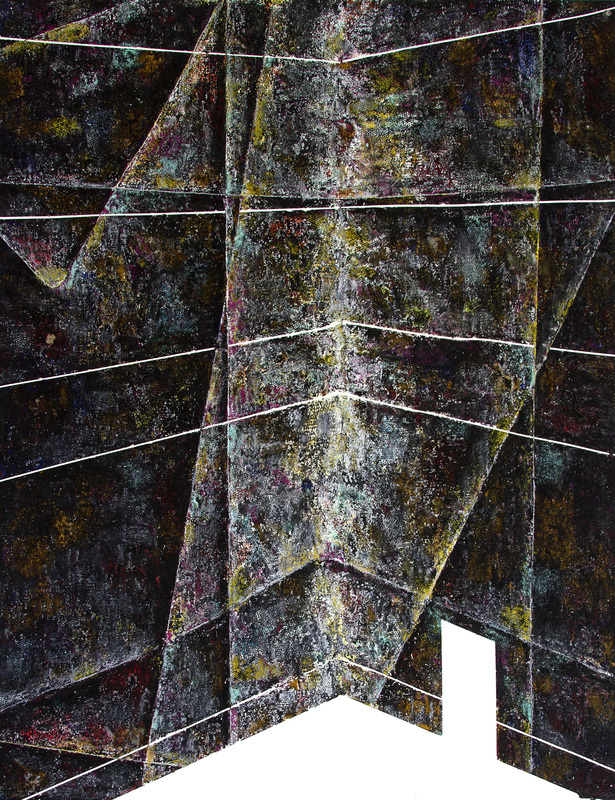 Printmaking exists as one of art’s most revered mediums. Its influence is impossible to overstate, as early practitioners were responsible for disseminating the written word and visual illustration to countless individuals for whom such access was previously limited.

In the modern era, fewer artists aspire to be master printmakers. The exhaustiveness of its procedure requires that artists entrench themselves in the medium’s many labors and intricacies. The artists that do, however, usually become enthralled by the processes, often to the exclusion of other mediums. Andrew Rice, a Colorado native who came to Utah to attend graduate school, became addicted to the medium in his undergraduate work: ” I chose printmaking during undergrad at the University of Colorado in Boulder. I wasn’t able to get into the first year painting course, so went to printmaking to get that out of the way early. After that first course, I was in it, no questions. I think I took one painting course after that,” Rice says, of his early love affair with printmaking.

While at the University of Utah for his MFA (he graduated in 2013), Rice studied with Justin Diggle, and the pair of printmakers currently are exhibiting work at the Salt Lake City Main Library in a joint exhibition. In “Redefining Structures” each artist intricately explores the rich aesthetic and imaginative possibilities of printmaking. It is a modest, yet compelling exhibition, where the works range in scale and subject, and a methodical current unites the selection, betraying each printmaker’s obsession with process and materiality.

For the past several years, Rice has amassed a reputation as one of the state’s outstanding printmakers, producing a distinct catalog of works, which range in style, subject and form. For Salt Lake City art-scene regulars, Rice’s signature astronaut prints likely are recognizable. As a common motif throughout his work, Rice compares the scientific virtuosity of interstellar travel, singularly embodied by the astronaut, with the expansive isolation of space itself. The acuteness of the printmaking process is an allegory for the intricacies of human invention–the suit that enables a human to breathe in space and exists without the help of his home planet. Yet, space and its daunting, unyielding vastness often thwarts such triumphs of human achievement.

In a departure from his signature figural pieces, the entirety of Rice’s collection at the library is composed of abstract works. Rendered in rich complementary colors, his textured prints revel in an opposition between implied and dimensional space.

“[I’ve been] removing the figure, while still keeping the idea of the space that keeps you alive is also the space that prevents any access from your outside surroundings,” Rice says.

As an artist, Rice often charts the fascinating conceptual and artistic nexus of space. Interested in the dichotomy between its vastness and limitations, his work is guided by spatial geometry, akin to the zealous experimentation that formed Picasso’s Cubist movement. “Just Around the Next Bend,” one of two large oil-stick drawings in the show, retains Rice’s longstanding interest in geometry with the application of precisely incised lines amid a tornado of painterly abstraction. His collagraph abstractions, which comprise the majority of the collection, are visually dense and combine bold stamps of color with textured collages. Rather than view an isolated figure in these spatial dichotomies, we now become subjects within them.

Justin Diggle’s dark etchings serve as an interesting stylistic counterpoint to Rice’s colorful abstractions. Where Rice’s works are rough and abstract, Diggle’s etchings are precisely and delicately rendered. His engravings portray intricate animal hybrids made striking by their placement against a pale white background. In unison, the subjects are as engaging as they are bewildering, evoking a modern take on da Vinci’s anatomy drawings.

Diggle says these recent works have been driven by the increasing ubiquity of surveillance in the modern world — from the biometric details collected from individuals entering the United States, to the ever-present security cameras in urban areas. While Diggle recognizes that these surveillance structures may be implemented for good reason, their growing prevalence is certainly changing how we think about our public and private lives: the average person may have their image captured multiple times in a single day. The sinister bird motifs of Diggle’s works call to mind the increasing use of drones, by both public entities and private individuals, where even in places like our backyards we may not be able to evade the all-seeing eye of surveillance.

There was a time in the 1980s, when art criticism had turned its back on traditional mediums such as printmaking. Declaring that painting was dead, the art world contended that novelty seldom originated from established mediums. With once-experimental practices like performance, video and multimedia art now taking center stage, artists like Diggle and Rice are making a quiet return to those mediums for which artistic innovators of centuries past indelibly made their mark, and finding they are equally adept at exploring very contemporary issues. 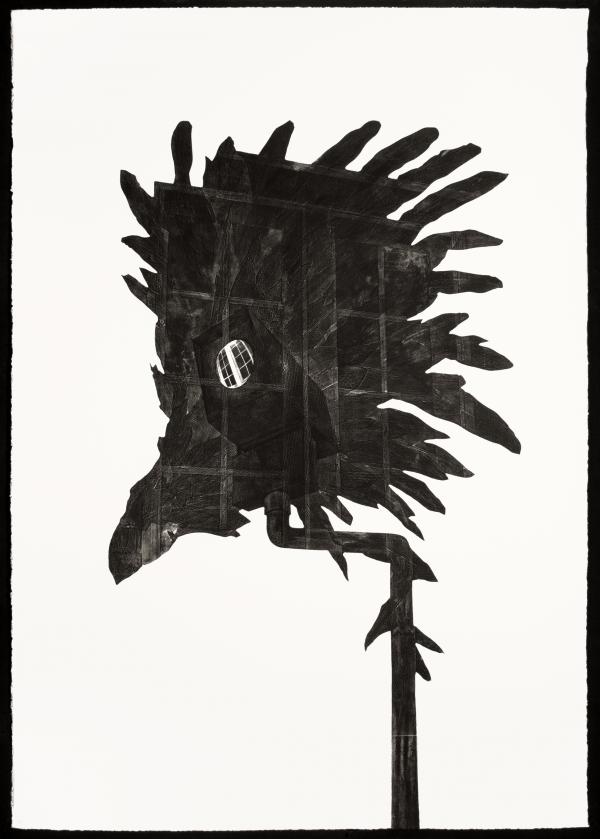 Redefining Structures: Works by Andrew Rice and Justin Diggle at The Gallery at Library Square through April 22.