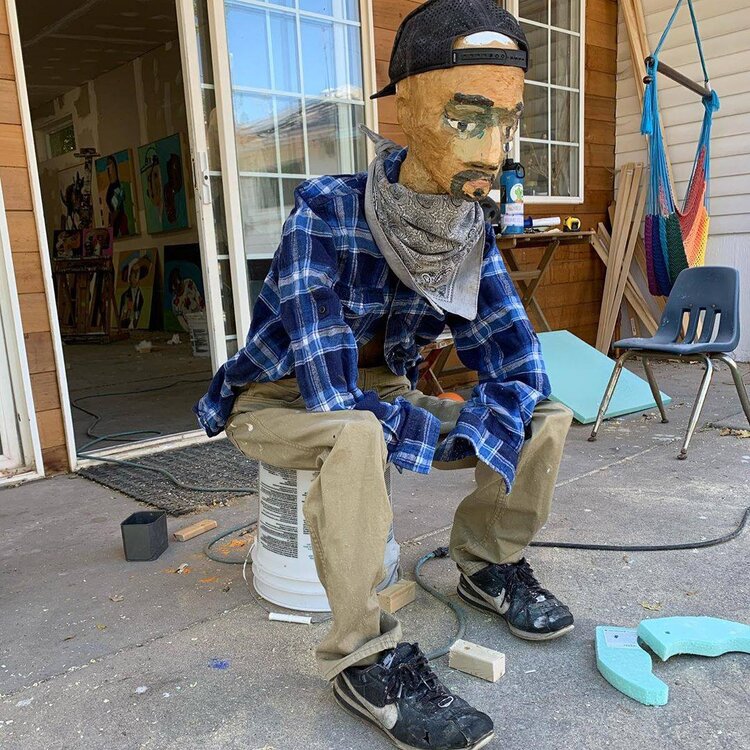 In downtown Salt Lake City, nestled in the shadows of skyscrapers and surrounded by the rumble of passing Trax cars, five sculptures emerged on Friday afternoon. It was the middle of the day, just after lunch when the pavement had been thoroughly heated from the sun. These sculptures are pieces in Andrew Alba’s multi-site project WORKED that are being displayed throughout Salt Lake City on various dates. WORKED is a part of the Pain and Possibility art series catalyzed by Sugar Space Arts Warehouse and Mestizo Institute of Culture and Arts to provide a platform for artists to engage with the painful present in all its complexity.

On August 28, these sculptures appeared outside Utah Museum of Contemporary Art (UMOCA) on the entrance ramp. They were aligned in a small gathering, all facing different ways that forced museum attendees to walk through the bodies on their way to the entrance. The soft notes of Cumbia music sifted in the air from a small portable speaker just behind the sculptures. Passing pedestrians gently bopped their shoulders as they walked by and passing car drivers turned their heads to observe the small gathering of humans and art.

The five sculptures resemble Latinx humans in the middle of a day’s work. They are covered in real clothing: a blue flannel shirt, black shoes with a white Nike label, a flowing white top with plastic, silver embroidery, cloth masks, a grey bandana, black pants splattered in paint. The faces of these figures seem to be constructed with a paper machier type material with sculpted faces, large daring eyes, and swirling colors. The essence of the faces bring to mind the neo-expressionist artistic style and resemble many of Alba’s large-scale paintings that have been displayed at UMOCA and Finch Lane Gallery. This use of multiple materials creates a striking combination of literal objects and abstract creations — offering a brilliant fusion of the tangible and the imagined, of something that is both deeply human and also an artistic creation.

The five figures facilitated an evolving sense of movement. WORKED is a durational performance. One figure with a bun at the peak of her head stood with one black pant leg rolled part way up the leg, the white shirt that laid over her implied body, flowed and rippled in the wind. The other sculptures held postures that implied movement. One sat on a paint bucket with shoulders hunched, hands resting between his legs, eyes gazing downward. There was the tangible sense of exhaustion, the weight of hard work sunk down the limbs of his body. Later in the afternoon, Alba picked up a figure in a brown hoodie that held a crescent-shaped shovel and carried him across the street in front of a storefront window of City Creek Mall. The window was filled with yellow, smiley-faced balloons advertising some unremarkable sale. I was struck by the multiple layers of juxtaposition of this moment: a sculpture with a handcrafted face standing in front of mass-produced, identical balloons; the earthy shades of browns that covered the sculpture’s face, clothing, and shovel against the monotonous, single-toned yellow of the advertisement; and the essence that our economy is run by the working-class (especially during a pandemic) against the backdrop of artificial sentimentalities.

One figure particularly caught the attention of intrigued pedestrians. The sculpture was on all fours covered in dark clothing and work shoes. He had large hands with fingers splayed wide across the ground and a sombrero slung across his neck, which is often seen as a reminder of the Southwestern and Central American workers’ rights movement. Multiple people dropped on their hands and knees, mirroring his position and peering at his face. Later a small child ambled up to the sculpture and plopped down directly across from it.

The child continued to sit there for multiple minutes, seemingly making eye contact with the figure. This sculptural installation is critical, raw, and emotional. Alba responds to the current and complex injustices that surround our country during a pandemic. These figures call critique to the hard, dangerous work that Latinx individuals complete every day that is essential to this country’s functioning and yet are treated as ‘non-essential’ components of the economy. In an interview with Modern West Fine Arts, Alba explained components of his artistic process, “I sculpt using everyday materials from my day job in construction. While materials like drop cloths, drywall mud, concrete, and lumber aren’t archival-quality, I am interested in how these materials will enact the inescapable slow decay of blue-collar bodies.” Alba brings real materials from the experiences of working in construction to protest the racist systems of the U.S.. Specifically, during a pandemic where working class communities are put at high risk of COVID-19, Alba’s work humanizes working-class individuals and calls outrage to their experience.

It is intentional that WORKED is on display on weekdays during typical working hours. Alba says, “My work is for tired, working people.” It is for the construction worker walking down the sidewalk to the next project, it is for the Uber driver transporting people through city streets, and it is for the essential humans that are worn down by the injustice of our socio-economic system. 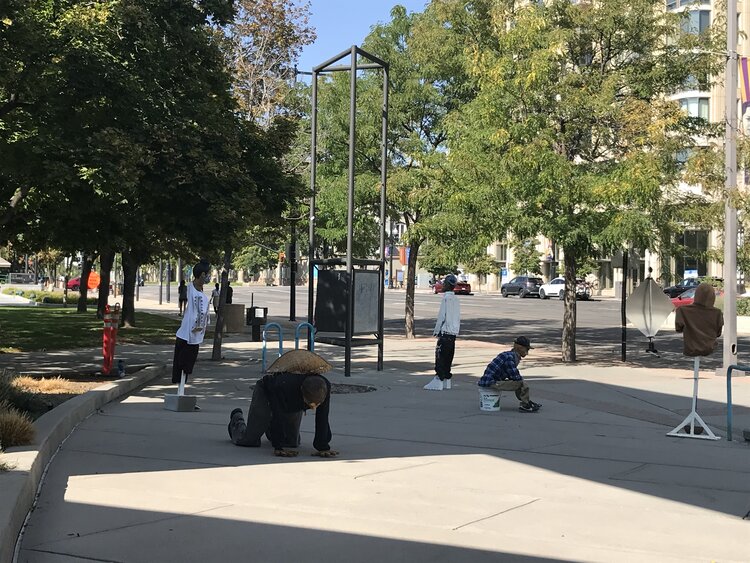 This sculptural installation will emerge at several other locations throughout Salt Lake City: