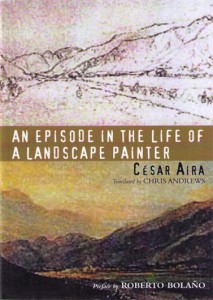 , the artist of the novel’s title, his face shrouded beneath a black lace mantilla, mounts a headless horse and rushes out to the Argentine pampas in a feverish attempt to document a volley of Indian raids on nearby ranches.

The slightly comical, jarringly surreal aspect of this scene contrasts sharply with the novel’s prosaic beginning, reminiscent of an art historical treatise: “Western art can boast few documentary painters of true distinction. Of those whose lives and work we know in detail, the finest was Rugendas . . .”

Johann Moritz Rugendas (1802–1858) was a prolific German painter known for his documentary approach to the landscape who became fascinated by the flora and fauna of the Americas on a trip to Brazil in 1821. The descendant of a long line of genre painters, Rugendas gave up the family tradition of military scenes for the landscape when the fall of Napoleon ushers in a “century of peace.” After his first American trip, he falls under the influence of Alexander von Humboldt, whose approach to the physiognomy of nature Aires describes as “an artistic geography, an aesthetic understanding of the world, a science of landscape.” Rugendas returns to the Americas in 1831 and stays there until 1847, visiting Haiti, Mexico, Chile, Peru, Brazil and Argentina. Rugendas’ prodigious output, his copious notes, and the numerous letters he sent home make him an easy subject to track, and as Aira’s novel begins, Episode appears to be a factually-driven, though breezily-related account of the milieu and development of a once well-known genre painter as he embarks on a trip to Argentina.

The facts of Rugendas’ life may serve as the weft in Aira’s concise linguistic tapestry, but imagination is the warp. The novel shifts, at times almost imperceptibly, from the bland threads of a factual recitation to a brilliant arras of perception and transformation, told through the poetic gauze of vision, desire and the artistic quest.

After a brief historical overview, Aires’ story begins as Rugendas, along with Robert Krause, a fellow painter whose company Rugendas finds more exceptional than his paintings, sets off from Chile with the goal of reaching the fabled Buenas Aires and Rio de la Plata. Their vertiginous trip through the Andes is dealt with in a few pages, as is their initial month long stay in Mendoza, where Rugendas longs to witness an Indian raid. The bulk of the novel — if one can evoke girth in a book short enough to be called a novella — is given over to the artists’ trip into the pampas, the calamitous “episode” of the title, and the transforming aftermath.

Traveling with an old guide and young cook the artists set out in the straight line that heads across impossibly flat land to Buenas Aires. The Atlantic, though, is not Rugendas’ true destination; it is, rather, at the journey’s midpoint, where he hopes to find a landscape that will defy his pencil and force him to adapt his technique.  It is a landscape that challenges Aira’s own pen. How do you describe a flatness that is beyond comprehension? What Rugendas and Krause see as “a well-polished table, a calm lake, a sheet of earth stretched tight” their guide calls “mountainous,” merely a preamble to the true pampas.

In his strict, swift prose Aira calls forth details of the landscape and journey that makes this economical, visionary account vivid and forceful. As the author has written elsewhere, though, it is not details that are important but atmosphere, and the atmosphere of Episode is literally electric. Three weeks into the journey the quartet reaches a drought-plagued, locust-ridden landscape that makes even the two locals pause.  It is here, in a dramatic temporal shift, that Rugendas’ life changes: “He could feel the horse’s extreme nervousness; there was a tightness in his chest, and his perception was becoming abnormally acute. The air had turned a lead-grey color. He had never seen such light. It was a see-through darkness. The clouds had descended further still, and now he could hear the intimate rumbling of the thunder. ‘At least it will cool off,’ he said to himself, and those trivial words marked the end of a phase of his life; with them he formulated the last coherent thoughts of his youth.”

This is the brief episode of the novel’s title. In a magnificently described passage, Rugendas and his mount are struck by lightning. Twice. The horse bolts and Rugendas, attached at the stirrup, is dragged for miles. He survives, though disfigured, in immense pain, and mentally damaged. The quest for the true pampas and the Atlantic beyond are renounced and the pair returns to Mendoza.

As the “brief episode” renders the artist homebound, drugged and disfigured his examination of the world turns inward: “Everything was documentation . . . There was no pure, isolated data. An order was implicit in the phenomenal revelation of the world; the order of discourse shaped things themselves. And since his current mental state was part of that order, he would have to examine it and find rational explanations for what seemed to be visionary or maniacal chaos.”

Swimming in morphine, Rugendas begins to recover and to practice his now transformed art. A black lace mantilla serves, not to hide his deformed face, which does not bother him, but to diffuse the harsh light. When news of Indian raids agitates his hosts’ ranch, Rugendas stirs from his convalescence and heads out into the pampas, Kraus in tow.

Though Aira’s novels can be unabashed heirs to the magical realist boom, Episode remains rooted in concrete, realistic details. Rugendas does not actually mount a headless horse.  The painter only thinks so at first. His vision blocked by the lace mantilla, he has mounted backwards, and, unable to find the reins, believes for a moment that the horse is headless. After a “nightmare circus trick” he rights himself and joins his fellow artist and faithful traveling companion on the trail of the raiding Indians. They spend the day chasing the sporadic action, sketching in their saddles, until finally Rugendas collapses. After a brief rest he strikes out again and the novel ends as he sits bathed in campfire, sketching the scores of Indians celebrating the day’s triumph.

Aira is a prolific author of a heterogeneous body of work. Since 1975 he has published scores of books, five of which have now been published in English by New Directions Press. A translator by day, Aira works on his novels in a coffee shop where he pursues fuga hacia adelante (flight forward), his term for the practice of never editing what he has written the day before. When he sits down he must write himself out of any corners the previous day’s output has put him in. The result is a collection of sui generis novels, peppered with absurd ideas, fanciful imagery and brilliant writing. In some of his books his imaginative method is evident, and at times to the book’s detriment, but the historical framework of Rugendas’ life in Episode keeps the author’s hand steady in a marvelous, seamless work of art.