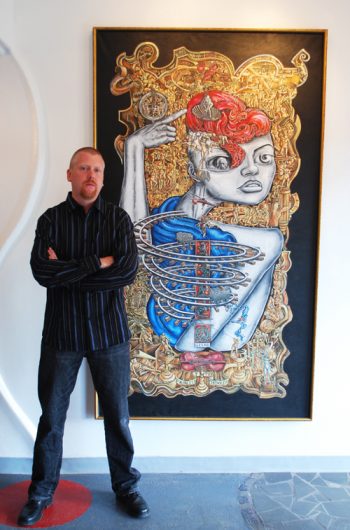 Michael Zetterquist in front of his painting at aperture gallery

Jamie Martinez admits to being brand new at her job of curating art exhibits for (a)perture, a marketing firm with offices in Salt Lake City and Los Angeles. If she is unfamiliar with the Salt Lake art scene, how in the world would she find and assemble interesting emerging art, I wondered, as I trip over road construction to get to the (a)perture office/gallery and event garden at 1617 South 900 East for the August 9 opening of their current exhibit.

What I found put this concern to rest. Two rooms of the tiny bungalow, supplemented by easels in the garden, displayed works of 19 artists from a variety of backgrounds – from self-taught to fine art graduates – and all “emerging” in the sense that they are not widely represented by galleries. Martinez did an amazing job of selecting artists and works that, while not similar in theme, style, or medium, seem compatible. Ian Ramsey’s traditional, watercolor landscape painting hangs comfortably over Loggins Merrill’s contemporary table. Mason Fetzer’s digital portrait of Barrack Obama appears to take no offense by Hillary Wilkinson’s mixed-media “Day of the Dead” painting hanging nearby. And fashion designer Jordan Halverson’s short, poofy dress, seems ready to dance on the stage where the local band, Mury, played acoustic music for the opening.

While not necessarily widely known, many of the featured artists have begun to make names for themselves: Trevin Prince participated in this summer’s Utah Arts Festival with paintings made with his own blood; photographer Shalee Cooper’s work has been in the Springville Salon and is part of the Salt Lake County Permanent Collection; and Ian Ramsey is a popular artist at the annual Art and Soup Fundraiser.

Martinez explains that she used various routes to track down this eclectic mix of mostly young artists, primarily the Internet. She went to web sites, like Artists of Utah, asked other artists, and visited the Arts Festival. In addition, (a)perture co-owners Anne Cummings-Anderson and Heidi M. Gress, both photographers, have work in this exhibit. 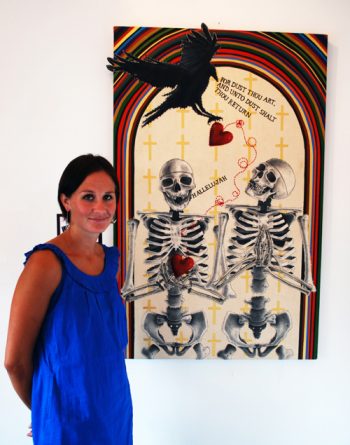 Hillary Wilkinson in front of her painting at apreture gallery

Since (a)perture is a marketing company that, among other things, creates special events for its clients in the art, fashion, and entertainment world, the opening of this exhibit was something of an event showcase, with delicious food catered by Gastronomy, and beverages from Utah distiller High West of Park City. The side garden, cooler than inside the house-turned-gallery, was decorated with art, lighting, tables and chairs, and a small stage for the band. Just outside the garden gate, a plush sofa afforded a place for guests to have pictures taken beside a unique figurative sculpture by Debbie Kirkpartrick.

With apologies to those artists I don’t have space to mention, I will describe two whose work I particularly liked and whose conversation was fun and enlightening.

University of Utah BFA grad Hillary Wilkinson exhibited one in a series of mixed media paintings inspired by Mexican folk artists’ Day of the Dead images. Skeletal images, loosely attached to the canvas with hand stitches, are combined with Christian symbols and scripture. Hearts, stuffed and stitched to the canvas create a bas relief element, while a raven hovers, partly off the side of the canvas. While Wilkinson borrows the images and colors of folk art, her use of paint, stitching, and stuffing are distinctly contemporary and convey her own sense of humor.

Michael Zetterquist is a self-taught artist who has explored art history, along with drawing and painting. His large painting in the (a)perture exhibit is clearly influenced by his love of Renaissance icons, mythology, science, and history. In fact, he has poured so much of himself into this very detailed and complexly symbolic painting that you could say it is autobiographical. At the party, which launched the exhibit, he happily took viewers on a walking tour of every inch of the 3’ x 5’ canvas, excitedly explaining his creative process, inspiration, and meaning behind each symbol. He has exhibited work in California and also sells his work on the Etsy web site, but the size of the web images can’t possibly do justice to the intricate details in his work. When he isn’t painting, Zetterquist works with autistic young men in a treatment center, and he also is a caregiver to an autistic son. 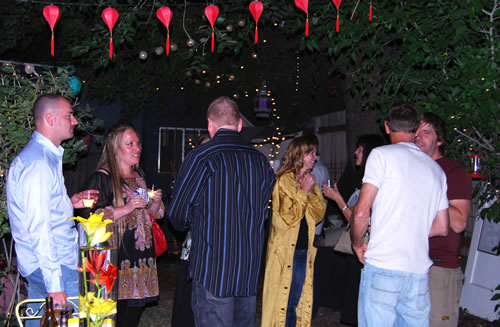 Patrons in the aperture garden

In addition to this annual exhibit of emerging Utah artists, (a) perture hosts exhibits for individual artists and groups of artists. They take no commission on sales, but they do ask artists to designate a charitable cause to which a portion of sales can be donated. If the artist does not wish to contribute to a charitable cause, they can rent the exhibit space from (a)perture. “We operate the gallery as a non-profit and a way to give back to the community,” explains Martinez. To submit an exhibit proposal, contact Jamie Martinez at 801-953-0109.

The next project for aperture is “Art Meets Fashion – Park City,” on Oct. 10. For additional information visit www.aperturemktg.com.