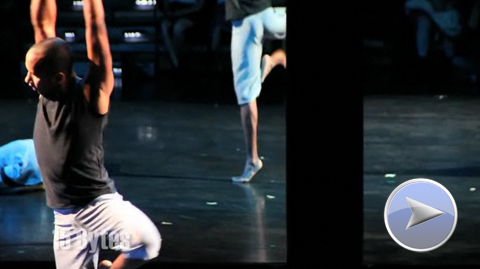 Ririe-Woodbury Dance’s Cipher, playing Thursday through Saturday at Salt Lake’s Rose Wagner Art Center, is an opportunity. An opportunity for what? There’s no right word for it, or at least not one. For entertainment, yes, because whether you like Glenn Gould, Schubert, the White Stripes or the Black Angels you’ll enjoy the music and what the company’s dancers do with it. For culture, yes, because this is a refined form executed by dedicated artists speaking to the nature of human existence. And as unappealling as the word may be, Cipher is also an opportunity for education.

Cipher features five works choreographed by Ririe-Woodbury artistic director Charlotte Boye-Christensen, including the world premier of “Touching Fire,” a collaboration with author David Kranes and architect David Webster. If you’re new to modern dance, or Boye-Christensen’s work in particular, these five pieces provide an engaging and varied arrange of forms and tones that help the viewer establish a vocabulary and points of comparison to understand the expressive power of movement merged with music. If you’re a long-time fan of Boye-Christensen’s work, seeing these four older pieces will not disappoint, not only because, as the choreographer discusses in this video, these works evolve each time they are performed, but also because seen together they are revealed as building blocks for the construction of the master work, “Touching Fire.”

The alternating currents of play and violence that electrify “Turf” are apparent in the climatic passages of the new work; the choreographer’s ability to express moodier, more restrained soundscapes, revealed in 2009’s “Gravity,” appears again in “Touching Fire’s” quieter movements; employing voice-overs from “32 Short Films About Glenn Gould” in “Key” finds full form in the current work’s use of stories by collaborator David Kranes, read by the author and an actress; and the use of stage props to propel the dancers and transform the space, touched on in “Bridge,” becomes, with the collaboration of David Webster’s stage set, a visual tour de force in “Touching Fire.” In the past each of these works has shone in its own way. If they are overshadowed this time by “Touching Fire” it is only because of the heights they helped it reach.

In the accompanying interview choreographer Charlotte Boye-Christensen talks about her working method in general and about “Touching Fire” in particular.

This video interview is available in the following formats:
Flash Movie large format