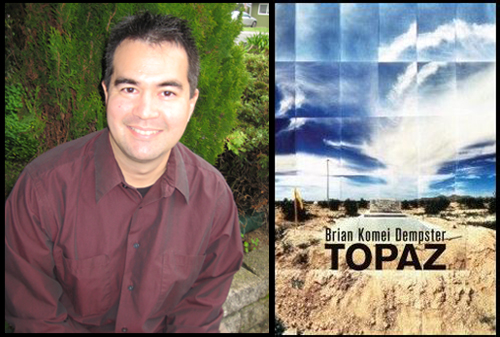 I was just over half way through reading Brian Komei Dempster’s debut collection of poetry, Topaz, when I recalled a recently read philosophical contention by the Slovenian philosopher Slavoj Zizek in which he posits that an event (in this case the internment of over a hundred thousand Japanese-Americans in the American Southwest during World War II) is an incident in which “the effect . . . seems to exceed its causes.”  Zizek proceeds to explain that “the space of an event is that which opens up by the gap that separates an effect from its causes.”

Dempster’s collection of poems is clearly the end result (or one end result) of his personal quest for his cultural identification as a Japanese-American, and for the  discovery of some meaning concerning the place he occupies in the world today, informed as it still is by his family’s tragic internment experiences. Dempster’s powerful poetry, like Zizek’s observations, serves to remind his readers that, although a historical incident such as the internment of the Japanese at Topaz may seem, to some, a static historical occurrence with a beginning, middle, and end, it is an event to many others that has still not come to a meaningful conclusion.

Despite finding himself in the unusual position of not having immediately participated in the events that are central to his work, Dempster nonetheless writes about the experiences of his maternal family, his grandparents and his young mother, with unusual empathy and a profound understanding of their persecution and its effects.  Carefully marking out his own struggles to survey the unusual architecture of a 21st Century cultural identity, Dempster, at the same time, invokes these powerful pieces of his family’s history and ruminates on how these persistent fragments of the past will fit into the life he leads today.  What, he asks, are the contemporary implications of these fragments, and what might they come to mean, even, to his own young son?

Dempster is desperate to understand the essence of these events and what they mean.  Only one generation away from his mother’s childhood experiences, Topaz isn’t real to him in the same sense it was to anyone who’d experienced it firsthand, and in clearly laying this loss bare in his slender, yet sagacious, collection, this young poet has made clear the nature of historical experience. Topaz is more honest in its spiritual and philosophical searching than any ten volumes that claim to reveal some lost and absolute truth, for it is the blessing and the curse of human experience not to see history objectively but to discover what personal meaning it may offer us by way of recasting and reconstruction.

Dempster knows and acknowledges this, and it is not the history he’s touched upon but the quest he’s undertaken in the book that makes it really interesting. He writes “I am the prism / refracting / your prison,” not just speaking to his ancestors or writing of their historical internment at Topaz, but excavating and articulating something more elusive, something real and intrinsically valuable from the past.

Dempster’s efforts to articulate his personal and cultural identity through these poems will likely resonate with American readers of all genealogical walks because his struggle is indicative of a broader sea change in how various American subcultures have come to relate to one another. Even fifty years ago, our country had large, but more to the point largely separated, populations of Japanese-Americans, Chinese-Americans, German-Americans, Irish-Americans, Scottish-Americans, African-Americans – on and on and on the list could go. But in the 21st Century, the undrawn lines of distinction between these cultures, where they are found living in the United States, have become much less clearly articulated. In “Pearl,” Dempster writes, “Through temple windows / I divide / the moon, / half-Japanese, / half-white, / a broken pearl” and proceeds, in “Chandelier,” to write of the beautiful boy he and his Chinese-American wife have had, “inside prisms, / our son reflects us all.”

Topaz moves gracefully, almost seamlessly, between ruminations of his maternal family’s experiences in detention and his own questions about who he is and what implications his family’s history may have on his own. He explores two eras that are radically different from one another, and the history that his readers find unfolding in each is indicative of their sharp distinctions. When he writes of his grandparents, of his young mother, Dempster illuminates a world of clear cultural boundaries, a world where his maternal family, in fact, has suffered on account of their perceived “otherness.” The globalized world Dempster now lives in is radically different, and poses its own fresh and unique challenges, particularly where questions of cultural identity are concerned. Dempster meets them fearlessly.

Perhaps one of the finest and, without question, most subtle moves in Topaz is the extremely sensitive balance the poet maintains between articulating the extent of the persecution his ancestors faced in a younger and less enlightened America while, at the same time avoiding, almost completely, placing blame for these events anywhere except squarely at the feet of human ignorance. In “Transaction,” his mother receives a letter from the White House that contains a reparations check and an apology, but ignorance has added insult to injury. “They spelled / my name wrong she muttered.” The same piece documents a hate-crime in Detroit a decade earlier, telling the story of a young man named Vincent who “had swung open doors / of a Detroit strip club,” drawing the attention of the wrong people. Men wait outside for him “behind cars the two crouched, clenching / bats,” and attacked him when “Vincent walked out, / opening his skull / like a piggy bank.” “Damn Jap,” they say. The young man’s mother is astonished at the ignorance, lamenting, “My son was Chinese.”

Driving the point home completely in “My Wife Grace Reflects on her Great Aunt’s Jade,” Dempster even goes so far as to invoke the Japanese invasion of Nanking, surprising his readers with flashes of Japanese atrocities carried out against the Chinese. No culture, this poem implies, is free of human ignorance; no one is innocent of casting another as an “other.”

Located in our own state, just fifteen miles west of Delta, not much remains of the center itself, but Dempster’s fine collection of poetry by the same name reminds us all that the effects of Topaz, and all the other camps like it, are far reaching, and pervasive. Intended less as a document of the imprisoning of his maternal family during World War II, Topaz serves readers best as a poignant and eloquently written reminder of the expansive consequences of human ignorance. Sensitively plumbing some of the darker depths of American history, Dempster has every opportunity to open old wounds. Instead he chooses to meditate upon some considerably more significant questions where both he and his maternal family are concerned, important, as well, to his readers, “not only where they were from but who they were / and would become.” In Topaz, Dempster has crafted an unforgettable work of poetic art, writing about “his strange / past and the mystery of [his] . . . own face, American? / This question flawed as we all / appeared.”

About the Author
Brian Komei Dempster is editor of both From Our Side of the Fence: Growing Up in America’s Concentration Camps (Kearny Street Workshop, 2001), which received a 2007 Nisei Voices Award from the National Japanese American Historical Society, and Making Home from War: Stories of Japanese American Exile and Resettlement (Heyday, 2011). His poems have been published in New England Review, North American Review, and Ploughshares, and the anthologies Language for a New Century: Contemporary Poetry from the Middle East, Asia, and Beyond (Norton, 2008) and Asian American Poetry: the Next Generation (University of Illinois, 2004). He is a professor of rhetoric and language and a faculty member in Asian Pacific American Studies at the University of San Francisco, where he also serves as the Director of Administration for the Master of Arts in Asia Pacific Studies. Topaz is his debut book of poetry and winner of the 15 Bytes 2014 Book Award in poetry. 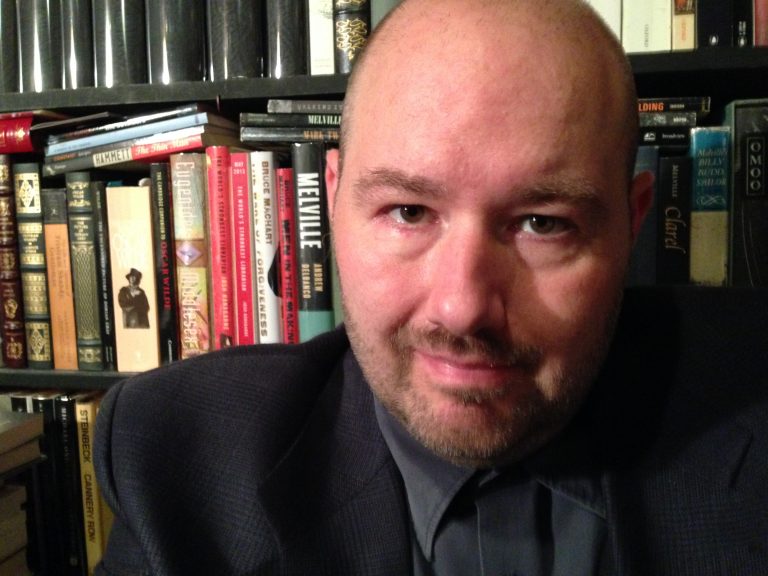