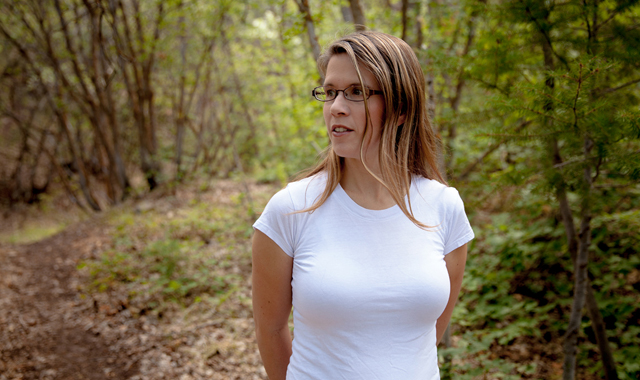 “I control what I can control and then I try to manage what I can’t control,” says Utah County artist Amy Tolk Richards. Richards is speaking on both an artistic level and on a personal level: as a mother, spouse, and human being.  Richards’ canvases are simple and reductive — slices of rural life filled with barns, cows and bales of hay — so it is surprising to be able to recognize in them a distinctive, signature style. Her compositions are filled with lush tonalities, atmospheric layers of mood, and an abundance of textural qualities. For someone who describes herself as a control freak, they can appear very loose. “Other people are relying on me,” she says about her life. “Art is freeing. It helps me let loose more.”

In high school, in the very Baptist area of Nashville, Tennessee, the young LDS Richards says she “often felt out of place socially, not only because of religion, but because of values; I was scared to make the wrong decision, so I came close to erring on the side of recluse rather than going overboard. I felt my way out was through studying and I was voted most studious senior girl. That was my reputation; it kept me safe.” In retrospect, her reticence and studiousness were utilitarian control mechanisms, helping her feel safe in an atmosphere she did not completely trust.

A different kind of control entirely would occur when Richards came west to attend BYU.  “I think I was rebelling,” says Richards. “I was working so hard in high school. I applied to Ivy League schools and they rejected me and I took an, ‘I’m rejecting you’ attitude.  ‘Why did I work so hard?’  I was sort of angry at the system.  ‘Why am I sacrificing when it doesn’t get me what I want’.” However, as it turns out, attending BYU would be the very best thing for Richards personally and as an artist in a very singular way.

“It was refreshing,” she says. “No one knew what I was like in high school, so I could reinvent myself, I could be my own person. Before, I had been mindful of always pleasing my parents. Now I could explore, it was OK if I wasn’t becoming the person I thought they wanted me to be.  Who is that person?  Someone who is more excited about having fun, experimenting, daring. I became a lot more interested in other people and became fascinated by being able to relate with people instead of just being this quiet person when there is so much to learn from others.”

Entering BYU was seminal for Richards, now on a secure level of control, where she could let her guard down in an atmosphere she could trust absolutely. “I let my GPA slip, I lost my scholarship; in high school I would have been traumatized over this but it really didn’t matter anymore.”  Ultimately, says Richards, “I took classes for fun instead of ‘I need to stay on track’.”  This involved art classes, reigniting an early interest in art.

To most, Richards’ “rebellion” would seem completely innocent, but to her it was a very real rite of passage to many things.  Various control mechanisms were the only means to prove to Richards, by trial and error, just what were her limits and how to feel secure in an atmosphere that imposed them as well as develop her own sense of personal security.  The ultimate control mechanism that would eventually go the distance for Richards would be her art, a very precisely rendered practice that is the balance between the upheavals of life and the predictability of pastures and bales of hay.

Richards’ subjects are reduced in structure; they are simplified yet rich in nuance and gloriously textured, creating a very real mood the viewer can appreciate.  Richards’ work is a reflection of and response to everything she does and moreover strikes the balance between a life she cannot control and painting she can. Her life is very busy. Her husband, J. Kirk Richards, is a popular Utah artist whose work is increasingly in demand and sells worldwide. With their four children, they split their time between a home in Woodland Hills and a studio retreat in Redmond, creating a life that is burgeoning with activity at a frenzied pace. Thus the controlled method of her painting becomes paramount for a sense of equanimity to a mother with so much responsibility to so many and at such an immense scale. A particularly definitive painting by Richards is the small “Cow and Fence.” A shadowed wooden fence in the foreground frames a broad chartreuse-green meadow, a girthy trunk of a tree to the right, a horizon line mostly obscured but for the semblance of a farm rendered in miniature, and beneath the farm and next to the tree is the shadowed profile of a cow. It is a simple painting, but filled with an abundance of substantive personality. All is reduced in structure as well as being reduced in material. Because of this mix of precision and earthy rawness, because of the exactitude in drawing yet pastoral haze, the mood is palpably felt. This sense is increased by the texture that is created by Richards’ sparse methods, a texture visible to the eye, evoking a smoky ambiance to the image that lends it the one-of-a-kind Amy Tolk Richards look and feel.

Drawn by their textural possibilities, Richards has a penchant for hay bales. “Five Hay Bales” is a small scale painting that is a gestalt of composite parts, containing richness of depth, abundance of tonalities, atmospheric use of hue, seductive simplicity, minimalistic relativity, and above all else, a crude, raw, rough earthiness. This coarseness is a direct result of the texture that Richards creates, as her structure is not only reductive but the materials she applies are very limited with the appearance of having been scraped on the surface. The texture is paramount in Richards’ compositions and creates an additional layer to what would be a lesser field of hay bales. Along with the lush tonalities for the field and the heavy palette for the wood beyond, the texture creates an atmospheric layer of mood, a softness to the feel of the misty composition and for each of her canvases a very real microcosmic environment, which has all of the characteristics of real climate, be it an afternoon of sunshine by a barn or the dewiness of morning on a meadow.

A categorical work for Richards is the delightful “Seven Hay Bales,” which seems to follow no rules and does so unapologetically. This is a small painting that features seven hay bales composed in a skewed order, with much visual appeal. The lifeblood of this painting is the vicissitudes of color found in the field: pea greens, corn yellow, rose pink, some white; and on a more refined level the texture that is created by the color that is incorporated onto the canvas, with the most minute amount of paint: often the edges are bare and raw and the paint looks like it has been created with a palette knife.

With this precision and exactitude comes incredible texture, earthy and gritty but sensual. The bales themselves have a large amount of white, more rose pink, and pea green with corn yellow. The flat end of the bale faces the viewer, who can actually see the coarse texture that is so appropriate to the image ironically created by great finesse and not callousness. Because the bales and the fields do not follow classical principles, there is a marvelous charm and freedom with these precisely rendered small canvases that come to life with a distinct ambiance with a very real emotion.

With the incredible demands that are heaped on Richards on a day to day basis, she describes her reality and perception on control in a way that is refreshingly honest, accepting, and open to the many vicissitudes of life that from her perspective make it colorful and give life meaning, variety and zest.  Speaking on an artistic level as well as a mother, spouse, and a human being: “Control could be a metaphor for me because a lot of the awesome things that come out could be just accidental; ‘OK, don’t touch that,’ so I manage the lack of control.  There are certain steps that I follow and others where I have to say, ‘If a surprise comes up, OK, let it go, or don’t touch it or change a thing.’” Amy Tolk Richards does an excellent job of keeping it real. Amy Tolk Richards’ landscapes are part of Echoes of Eden, an exhibit also featuring Sarah Richards Samuelson and Mary Fielding Summerhays at the Covey Center for the Arts in Provo through September 2. You can view more of her work at www.amytolkrichards.com.