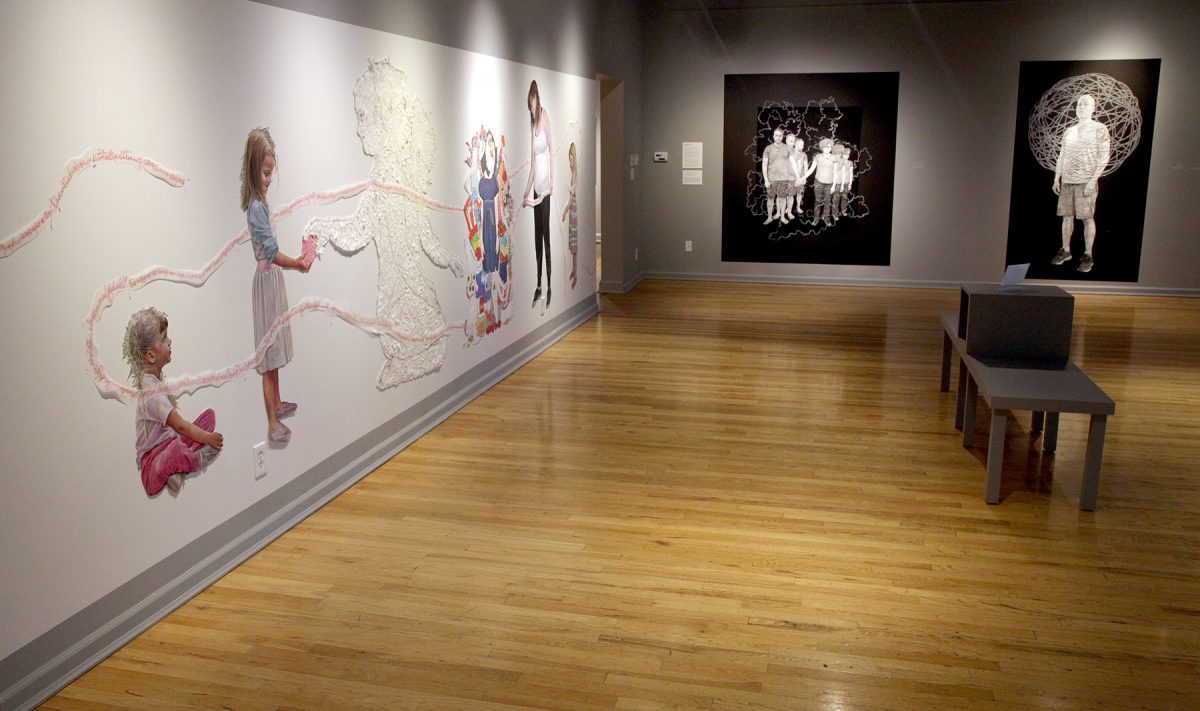 Relationships build us up and tear us down. Our dealings with family members, teachers, romantic partners, and even people we meet in fleeting interactions mark us, sometimes for the rest of our lives. Family members and others, loved ones or not, give us the syntax to interpret the world around us and understand continuously developing ideas about who we are. Despite the traditional notion of American individualism and self reliance, every human is made in and made sense of through a tangle of social connections always in the process of being constructed and broken. We create meaning from relationships to the point that we often rely on others to understand what is real, for better or worse. The two exhibitions at Finch Lane Gallery through September 20 — Amy Bennion’s I, your glass and Elizabeth Matthews’s Untold Aftermath — focus on how people are shaped by positive and negative relationships and the ties that connect humanity in the shared experience of relating to others and ourselves. 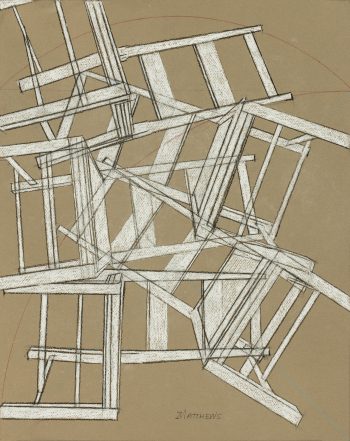 Elizabeth Matthews, “Enmeshment: How is it Undone?”, charcoal and chalk on paper, 19.5″ x 15.5″. Photo by David Hawkinson

Matthews and Bennion create personal mythologies and symbols to explore their individual histories of trauma and recovery. Each piece of Matthews’ collection contains a painting or drawing of a dining room chair, a personal symbol that reflects the24 years she grappled with the effects of an abusive marriage — deceit, gaslighting, and the belief that she was responsible for the abuse she experienced. Through this work she meditates on family life and place lost and is able to communicate and process the trauma, connecting with others who are dealing with abuse or family dysfunction. Bennion also investigates trauma as a shared human experience, especially the effects of mental illness, divorce, and fear of death, starting from within the close group of her family. Bennion’s work is a collaborative project between the artist and her four siblings, sister-in-law, and nieces, who all appear in drawn or painted portrait form in the gallery. 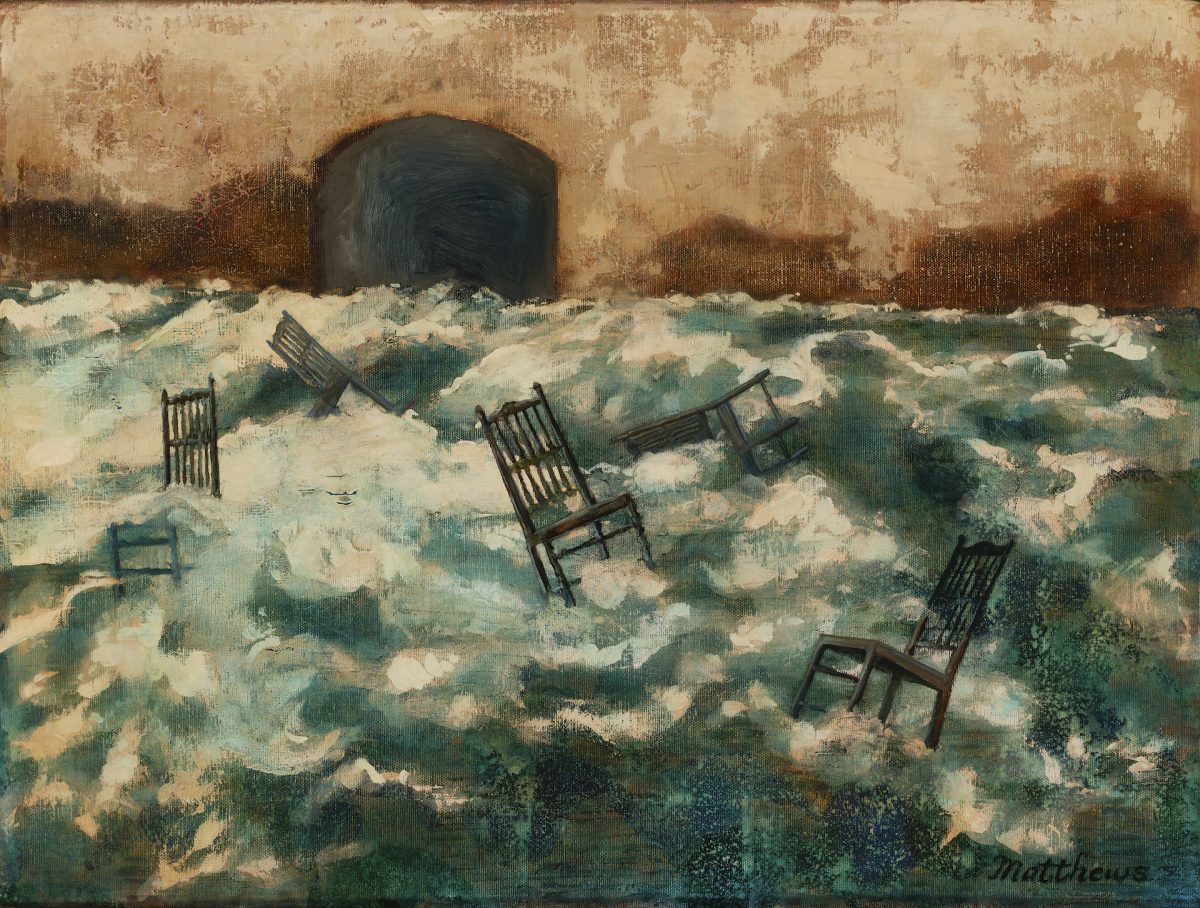 Matthews relates that in 1998 she was assigned to draw something sacred for her art course at Brigham Young University. She created eight chair drawings, which for her signified the domestic space of family life. Her reverence for the home and spaces where families gather — sitting together during a meal or doing homework with the kids around the table — was nonetheless tied up in the fear, shame, and confusion of living in an abusive marriage. Matthews explores this topsy-turvy domestic world in pieces like “We All Fall Down” and “Enmeshment: How Is It Undone?”, which feature chairs, rendered in graphite, stacked precariously or overlapping impossibly in space. The chair, a stabilizing object that often marks social order and distinctions (from a king’s throne to the patriarch’s seat at the head of a table), is here off its legs and heaped as a pile of identical, nondifferentiated objects. This inversion of domestic order is at once reflective of the chaotic environment Matthews lived in, but also an irreverent inversion by the artist of an order that never made the sense it was supposed to. 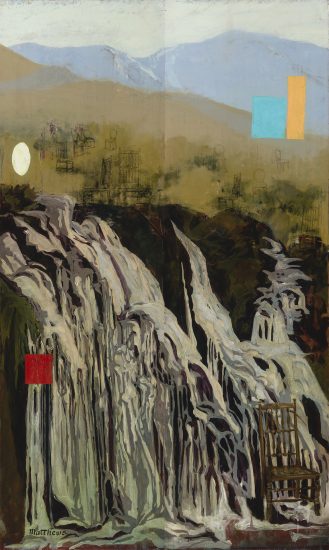 Matthews’ paintings often combine the mundane, utilitarian form of the chair with tumultuous natural forces or wild animals, questioning the idea of the tamed and civilized human realm, which still contains all the violence and predatory forces we’d like to think are safely outside our dining rooms. In “Without Authentication,” a large oil and charcoal on two vertical panels, a white waterfall cascades toward a chair in the bottom right corner while the ghostly outlines of chairs in charcoal rotate to different angles above the falling water. In “Balancing on the Rocks,” a dark-colored chair is posed precariously in front of the breaking of a wave, with a large plume of spray coming toward it: The spindly chair will be knocked over or carried out into the water — the fragile form of the man-made object contrasting with the power and solidity of the natural world. “Opportunity Cost” shows many chairs bobbing up and down in waves with an ominous black opening just behind. These images reflect the domestic turmoil Matthews describes in her artist statement, further inverting and displacing these everyday objects like the dissolution of family life the artist experienced.

In contrast to Matthews’s symbols of disconnection from familial relationship, Bennion’s works feature many connective shapes and elements between drawn or painted human figures. In “Betsy (Uror, Veroandi, ad Skuld),” winding red words on transparent paper connect various elements in the composition: a just-over life-size adult (the artist’s sister); two little girls on one side and one more on the other (her nieces); an assemblage of candy, colorful clothing, toys, and body parts; and a multi-body female figure made of mylar. These flowing words and symbols are part of the family’s shared syntax of images and meaning described in Bennion’s artist statement: “By using this discrete group, people who parallel the artist’s genetics and experience, Bennion delves into how all people are connected. Like a fractal, this micro branch of connections echoes the larger branch of human connections.”

Similar connective elements can be found in “Christopher (Dionysus).” Here, pink and black cubes, prisms, spheres, and arrows snake between the echoed color and black-and-white figures of the artist’s brother. From his extended arm and hand cascade blue and black flowers, which move toward another three-headed figure, part Greek deity, part Pre-Raphaelite maidens. As a musician, her brother Christopher identifies with Dionysus (the god of music and mania) and shares this connection with millenniums of people who worshipped the pervasive god. 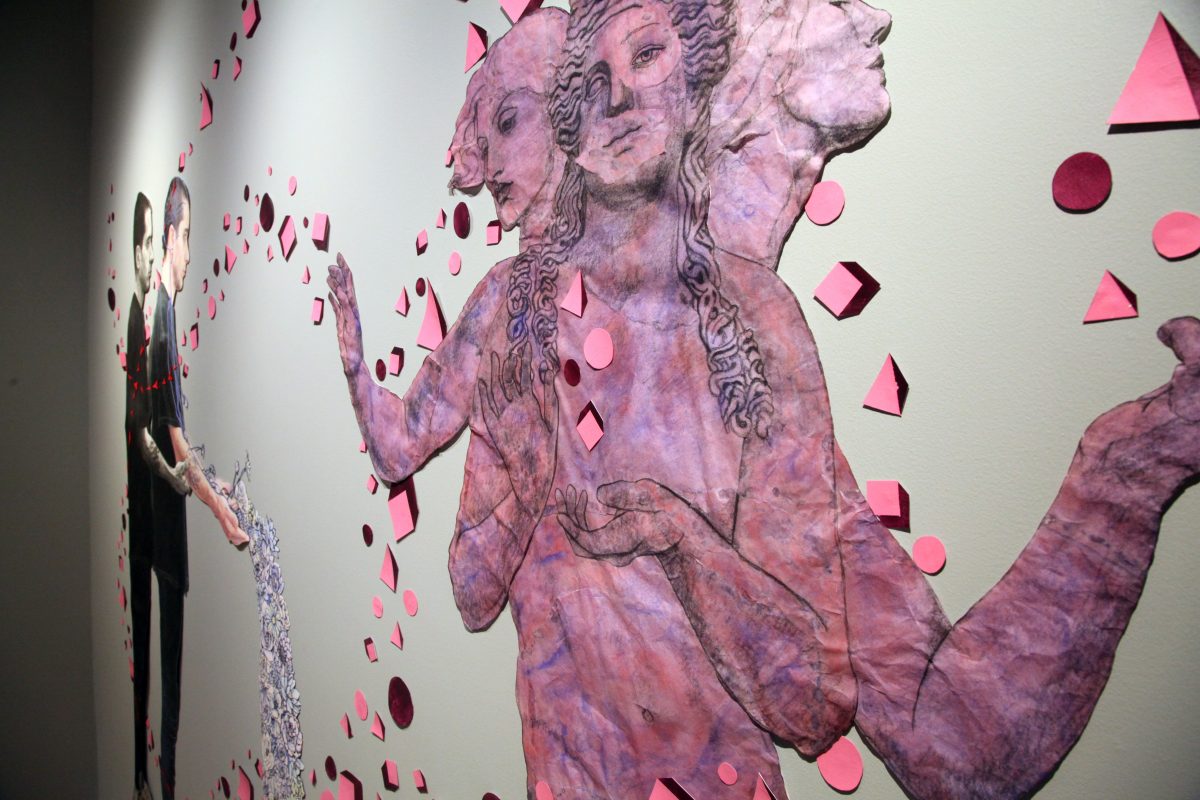 The historical and religious symbolism continues in “Seraphim,” where multicolored wings fly from the face of a black-and-white seated depiction of the artist’s brother, and in “David (Atlas),” where a monochrome man stares out from a sphere of crisscrossing, overlaid lines. Both allude to ancient myth, the first to the angels that occupy the highest order of the celestial hierarchy in Abrahamic traditions and the second to Atlas, the Greek titan cursed to hold up the globe for eternity. At the same time, beanie babies or gummy worms in “Untitled” hold similar symbolic resonance for the family, alluding to a shared memory or association that is as poignant to the small group as a certain local myth would be to an ancient family. Either way, the large drawings attached directly to the gallery walls are almost sculptural and breakdown the typical framed barriers that mediate the audience’s connection to their subject matter, making them feel more familiar and immediate.

In both artist’s brave sharing of their personal histories, with negative and positive relationships, we find a meditation on how human connection is forged and broken, studied and reassembled, and turned into art that viewers can connect with. The images present stories that are intensely personal, but hold common elements and symbols that have remained constant through many centuries of human history. To view both exhibits is to think about your own relationships and how to explain their complex interplay with your own identity and path forward. 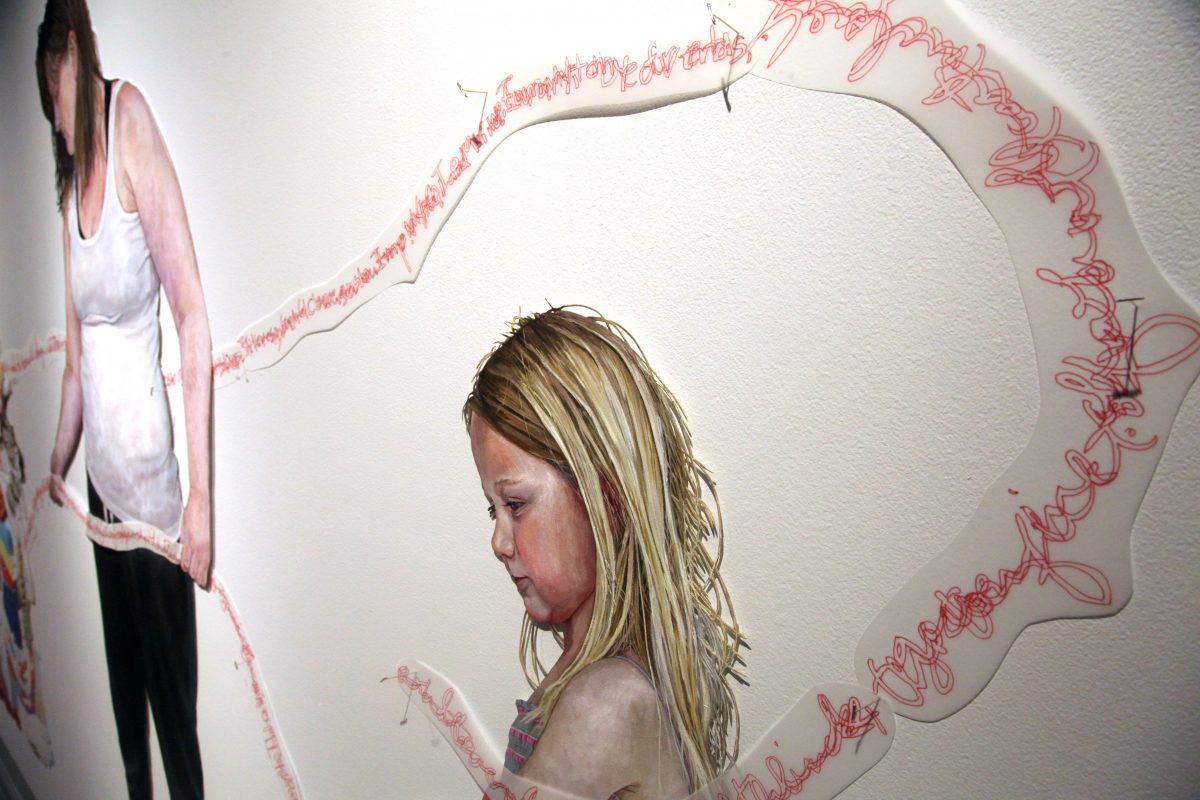