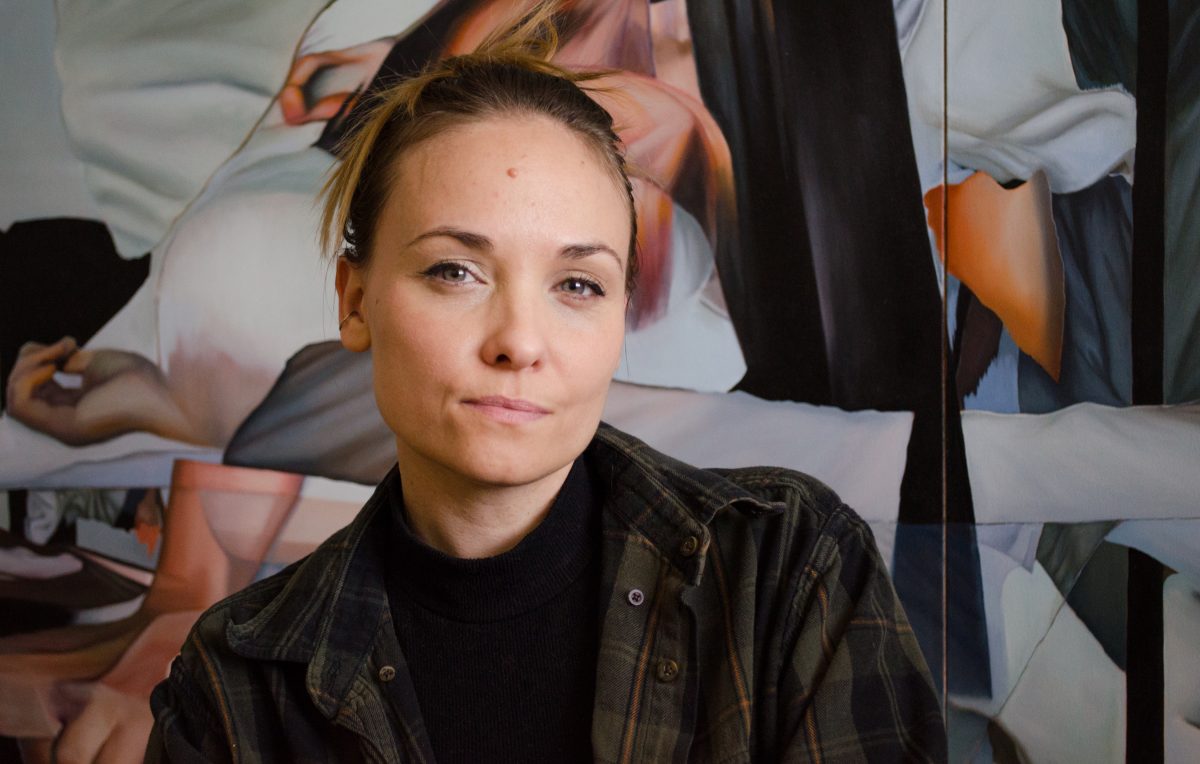 In Renaissance workshops, artists often specialized: for a nativity scene or portrait of a noble, one artist might work on all the background landscapes, while another might be called in to paint the folds in a saint’s robes and a third would show off their skills on delicately rendered hands. Amber Tutwiler might have been put to work doing the latter. In paintings spread around her Salt Lake City studio, hands gracefully twisted and perfectly modeled fill the canvases — though, unlike in a Renaissance work, they float about, disembodied and contextless.

In “Mirror Mirror,” a new, large work which will be part of the Utah Museum of Contemporary Art’s new exhibit, i know you are, but what am i? (De)Framing Identity and the Body, Tutwiler proves she has no mean skill with fabric either. In addition to body parts — or at least the suggestion of body parts (they’re not nearly as defined as in earlier works) — sheets and pillowcases conjure up an intimate, bedroom scene. The work as a whole, painted across two canvases that loosely mirror each other, has been chopped, diced and reassembled in such a way that while the eye scans, investigates and even revels in the rich surfaces, the mind struggles to resolve the whole. 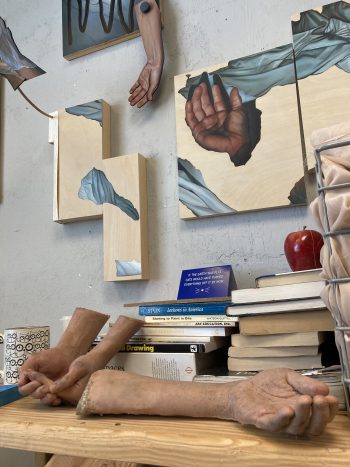 In some respects, “Mirror Mirror” will be Tutwiler’s introduction to the Utah art community. When a tenure-track teaching position opened up at Utah Valley University in the summer of 2020 Tutwiler jumped at the opportunity, sight unseen. She was teaching in a temporary position in her native Florida and figured  anything would beat the prospect of going back to bartending — in the middle of a pandemic. “I prefer it here,” she says of the switch from sea level humidity to high desert living. “I am actually not a good Floridian. I hate the heat and humidity … I love the cold, I want it to be cold all day every day.”

By now you know something about Amber Tutwiler’s location and sex. Her age would complete the A/S/L triumvirate of our reductive digital era. But we didn’t ask. She’s old enough, however, to remember a time when one didn’t live in a digital space. She grew up in a rural setting, riding horses, climbing trees and playing in the mud. She got her first computer and connected to the internet at age 13. And as she discusses the evolution of the digital experience, she cites, from firsthand experience, things like AoL, Instant Messenger and Myspace, terms that would likely be foreign to the students she teaches.

It may be precisely because she remembers the before that she is so interested in the after —in the what we have become or are becoming in the digital age. “Living in the digital age is its own form of trauma,” she says of this obsessively designed sphere we immerse ourselves in daily.  “I’m interested in our fractured identity, the way we split ourselves into multiple versions of ourselves.” This is something, she acknowledges, we have always done, presenting ourselves differently to different people or in different situations. But the digital world has exponentially intensified the process; and unlike life in the analog world, the digital sphere provides a constant reflection, a mirror framed in a feedback loop that demands more and more while returning less and less. “Everything we do is an extension of our body,” she says, “and the internet is an extension of our identity, of our body; implied in [the digital sphere] is we are not whole unless we are connecting.” 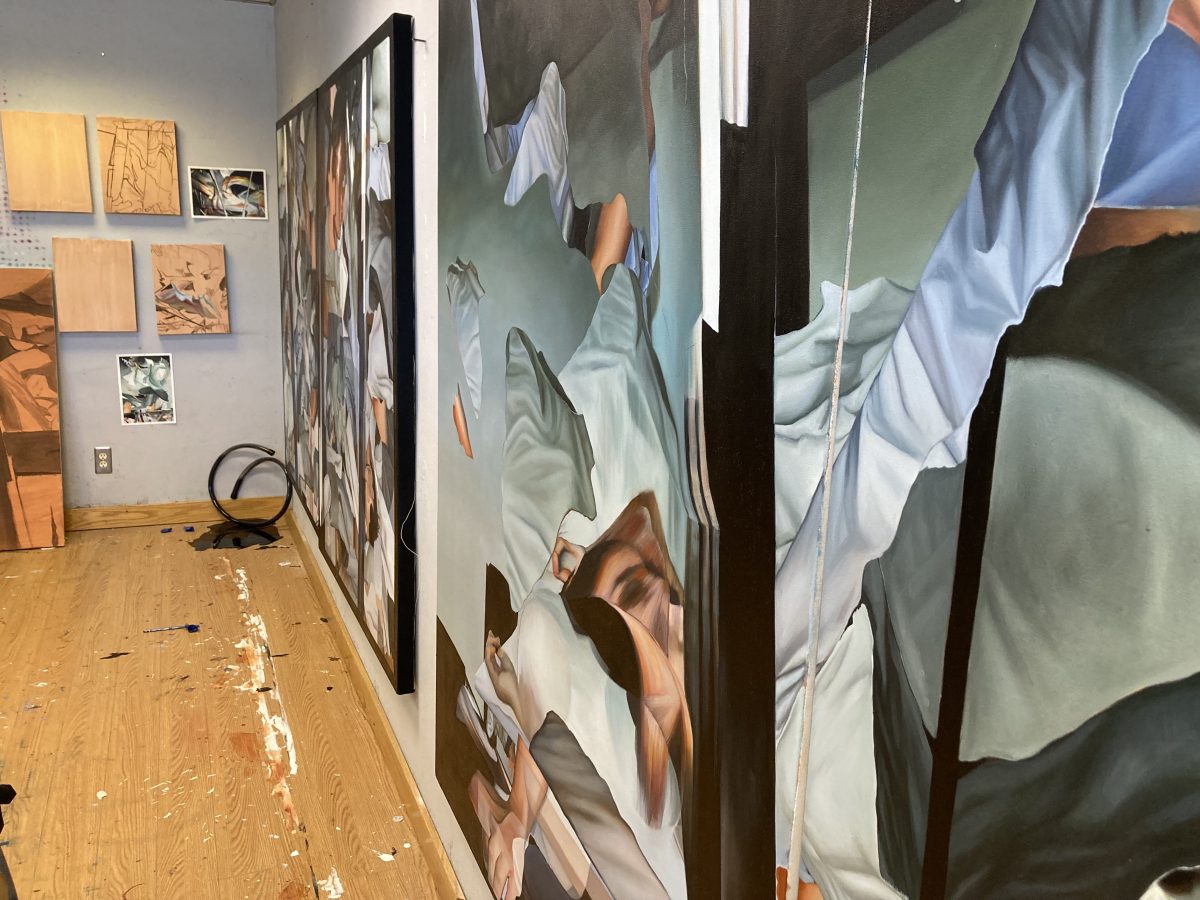 Tutwiler is trying to make sense of this process in her paintings. She builds her images digitally before she ever approaches her canvas. She works in bulk. She might work at the computer for a week or two, pushing herself to create ten digital images worth considering. Not all will be used, however: “There are hundreds of digital paintings I’ll never use or will trash,” she says. Occasionally, she’ll create a small watercolor study of a proposed work after the digital work is done. She wants to be sure, before she approaches a canvas, because she’s asking herself,  “Is this the thing I really want to devote myself to? Because these take a lot of time.”

When she’s ready she’ll pull out the canvas and execute the painting in a manner not dissimilar to what would happen in a Renaissance studio: a ground, underpainting, alla prima work, glazing and finally a varnish.  She’s willing to make changes as she paints, but because of all the work done at the computer, there are few pentimenti. And she feels no temptation to simply print the digital images large. “I don’t see the digital print as the thing … it’s just a step in the process.”  Even though the painting process might be laborious — she puts up to 120 hours into a large painting — she likes the physical work. “I like the body relationship I have when painting.” 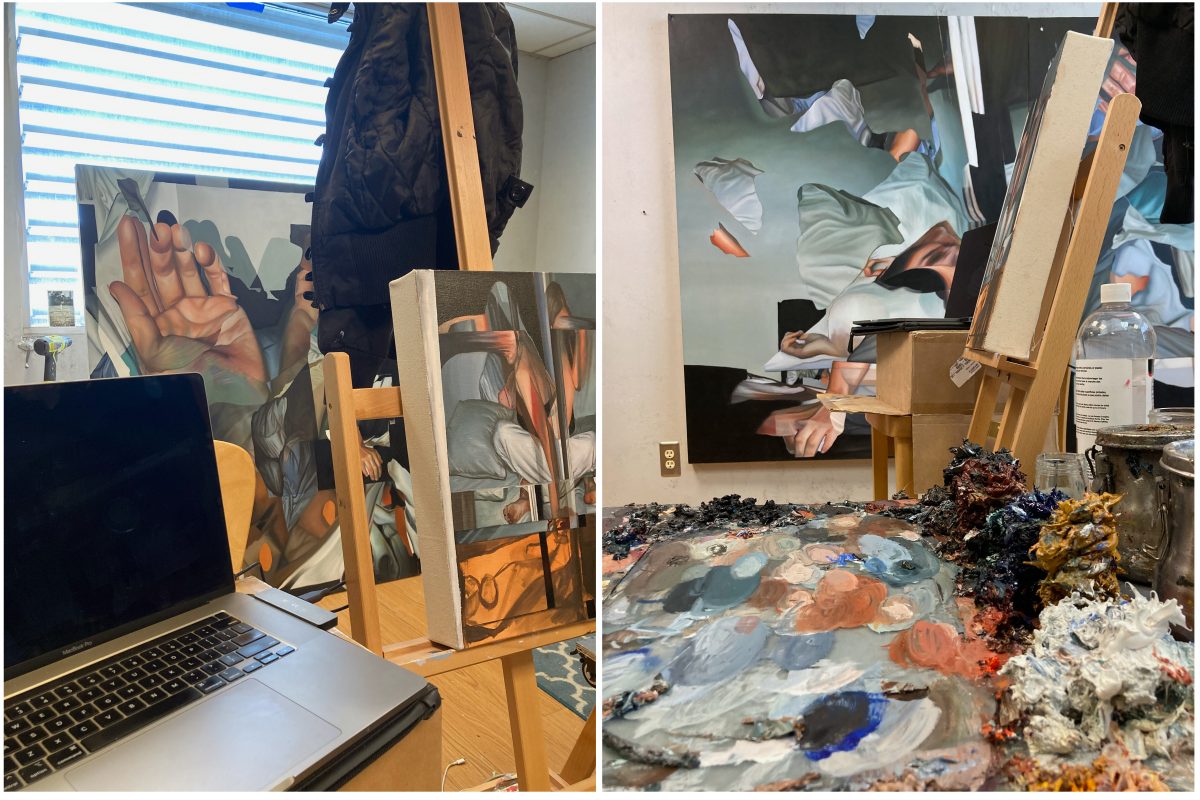 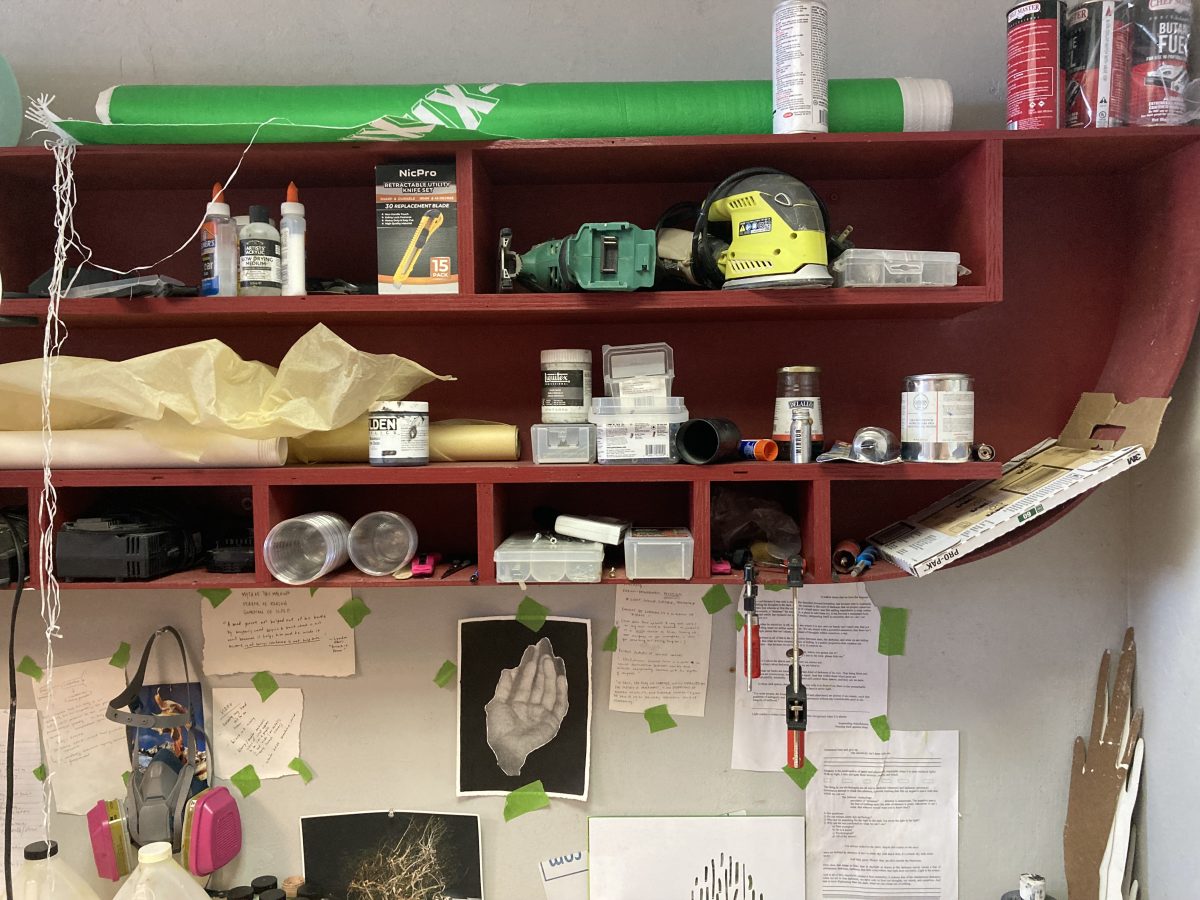 That desire to act physically goes back to her childhood, when her mother enrolled her in gymnastics at age 3. That transitioned into dance, in magnet middle schools and high schools devoted to the arts. “I liked using body to do things,” she says of dance, “but didn’t feel it was the way to express myself.” (She also didn’t like being told what to do.) So ultimately she focused her efforts on visual arts: “If no one was telling me what to do, I was making art.”

Art is a way for Tutwiler to express things she can’t find the words for. In “Mirror Mirror” it is something dark and unsettling. “It isn’t about what you see but what you don’t see,” she says about the work, comparing it to a theatre stage, when the curtain is dropping: behind the performance you’ve just witnessed, something else is beginning to happen, but it’s not clear what. “I’m really interested in hyperreality, in things that are both real and unreal simultaneously.”

For this and other work, she shoots at night, always using a flash, to capture images of her own body as she moves around on her bed — hence the fabrics. As such, there is a sense of intimacy, and an implied sexuality, even if in “Mirror Mirror” no body parts are clearly indicated. Her process is a sort of performed intimacy, not unlike what happens in the digital sphere. “Our identity on the internet takes on its own lifeforms; I’m interested in the paths it takes to have viewers and how these become their own pathways to become a new identity: people who look at it are going to design who you are off based on what they see.” 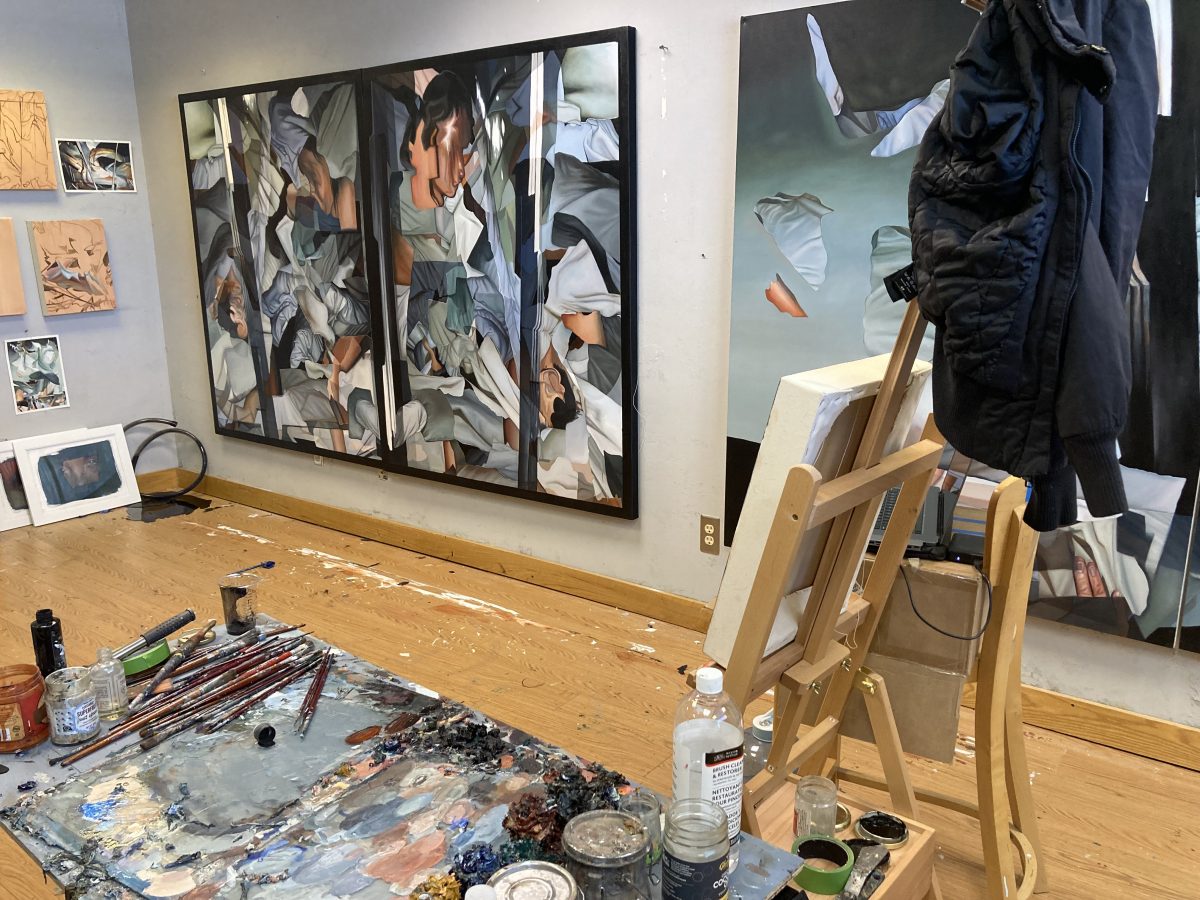 What you see at UMOCA will be up to you. “I don’t want to be responsible for telling the viewer what they have to see,” Tutwiler says. She leaves clues, creates visual relationships in the fractured composition, possibilities for narratives. But nothing is explicit. She says, of both her life and her work, “At this point I’m working on trying to merge all of these identities; find a way for them to dance with each other rather than compete.”

You can view more of the Amber Tutwiler’s work at https://ambertutwiler.com.