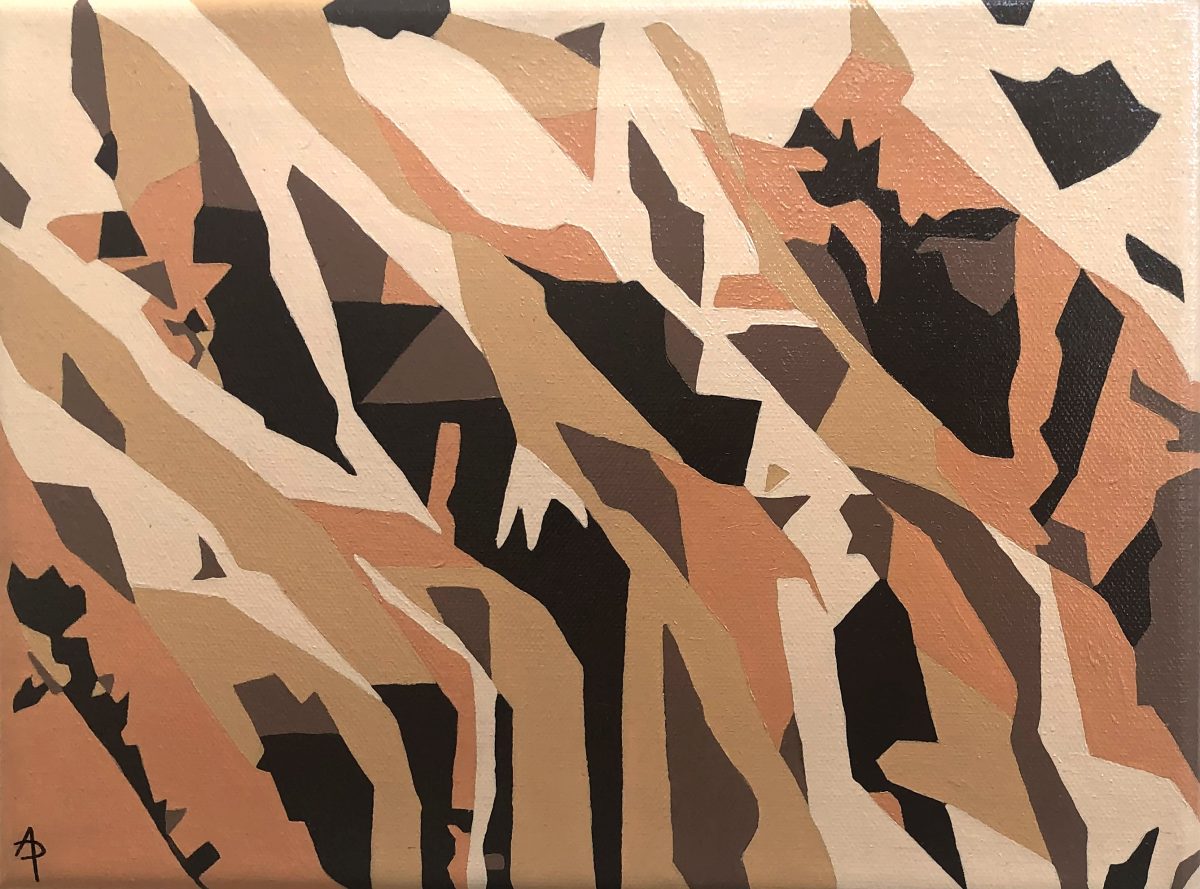 When they hear the word “desert,” most people think of oceans of sand, dunes like waves following each other into the distance. In Utah, we know better: most of the world’s deserts, including ours, have little or no sand to see. Instead, they are made of rock. Bedrock to capstone, the local desert is an anatomy lesson in naked geology. You never know what’s underneath a forest, but in the desert you not only see the layers, but you know even from a distance which are harder, like the Navajo sandstone that, by resisting erosion, allowed buttes and mesas to survive while the surrounding stone weathers away. How soft the underlying stone is can be judged by the arches wind-blown dust wears through it.

Most desert landscape artists try for the monumental character that so impressed early explorers: the drama of desert topography. In Abstract Landscapes: Deserts of the American West, a collection of paintings and photographic prints at Bountiful Davis Art Center, Amanda Porter has come in for a close-up — so close in fact that what she isolates a whole variety of abstract details. The paintings are done on small, pre-fab canvases, each around a square foot or less, each meticulously folded around its stretcher bars, with carefully painted edges: their material meant to disappear into the two-dimensional, geometric puzzle they present.

The prints are more numerous and often more abstract, being high-contrast cyanotypes that, for the most part, consist of white shadows on blue backgrounds. Some, like the cleverly-titled “Toadstools on the Staircase,” display shallow modeling and other depth cues that make them more like regular photos. The choice of the cyanotype process hints at something deeper; since it primarily uses ordinary paper, water, and sunshine, it’s often said to be more environmentally friendly than most photographic processes. That’s only true if one doesn’t consider the artist part of the environment: the chemicals are toxic while the prints are being made, and some artists have accidentally poisoned themselves. And of course no work of art should be thought safe to eat. Viewers may work out the significance of all that for themselves. 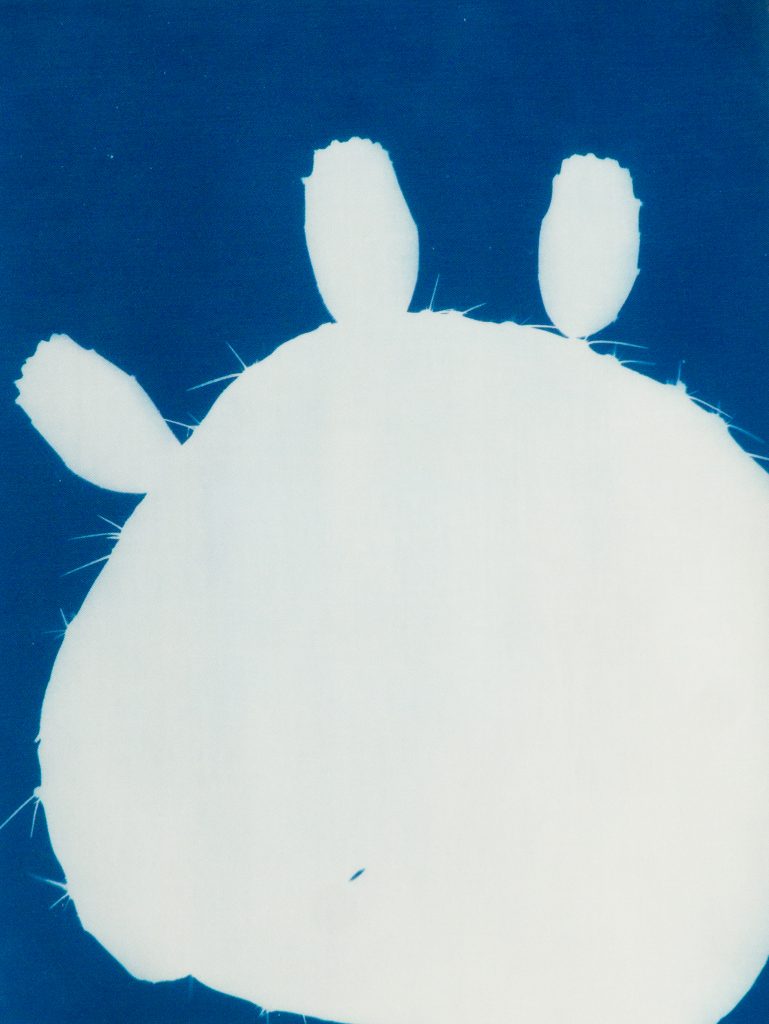 “Prickly,” from Toadstools on the Staircase, cyanotype, 11 x 14 in.

All images are abstracted, which is to say drawn out, from original models. Amanda Porter finds certain qualities of the Utah and New Mexico desert compelling, like its resilience. For her, the cracked earth patiently waiting for water is part of a durable natural cycle, which she foregrounds by making it a subject rather than a background. Sometimes, like in “Desert Tower,” she removes depth clues and stylizes surface detail, enlarging it to emphasize its geometric features, but leaving a recognizable image. Then again, in “Goblin Valley,” she takes the process to the point where recognition begins to break down. In this case, she’s included a similarly abstract human figure, the two images working together so the rocks give the figure a context and the figure lends scale to the rocks. Likewise, the blue sky and context help identify the angular white shapes as clouds. In “Desert Cliff” and the “Desert Shapes” trio, on the other hand, the abstraction has reached the point where titles are necessary in order for eye and mind to puzzle out what they’re being shown. At this point, pure aesthetics are beginning to prevail. It’s the composition, the color shapes and contrasts, that are appreciated and the representation is moot.

The cyanotypes, being direct copies from the original, are simplified by being made not only a single color, but blue, even the “Coral Pink.” Sometimes a camera intervenes, and a vista results, but many of them have the precision of shadows, the original having been laid on the sensitized material and so exposed to the sun’s light. This is a sophisticated version of an old child’s toy that used printing-out paper, a photographer’s tool sadly no longer available, to do essentially the same thing: make prints from negatives using bright light. The similarity between the child’s toy and the mature artist’s tool resonates with the connection between creative play and the hard work of making art, which despite their superficial differences, are on deep level intimately related. 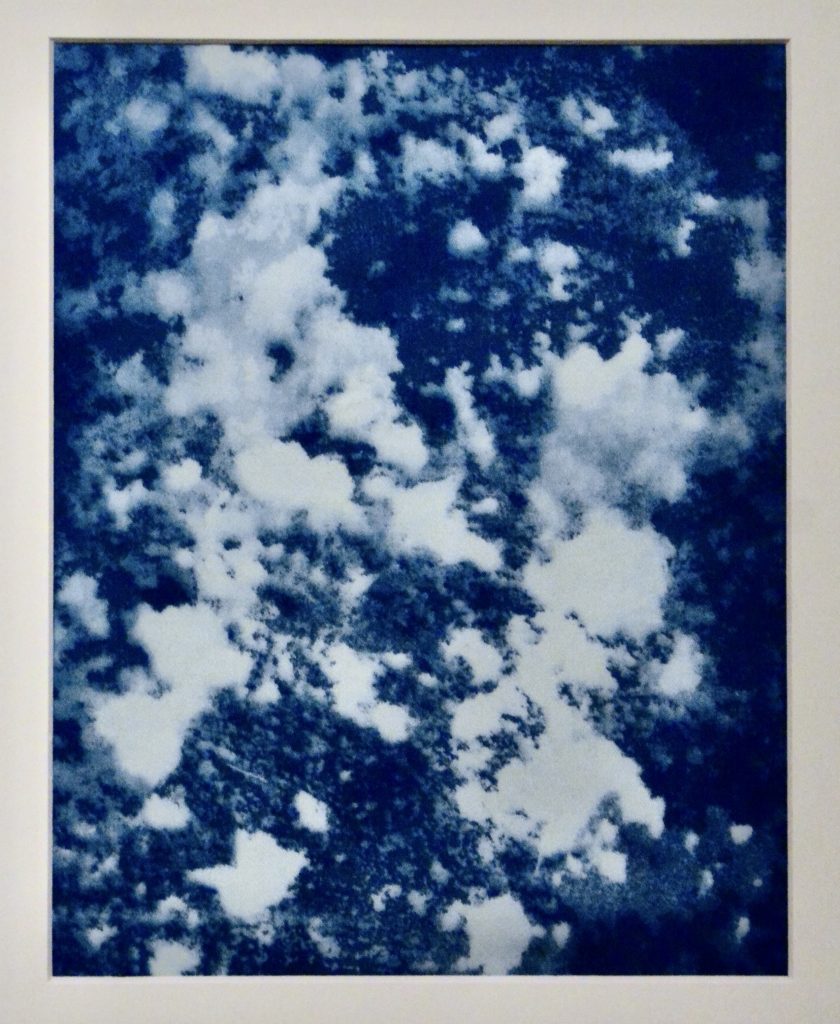 “Coral Pink,” from Toadstools on the Staircase, cyanotype, 11 x 14 in.