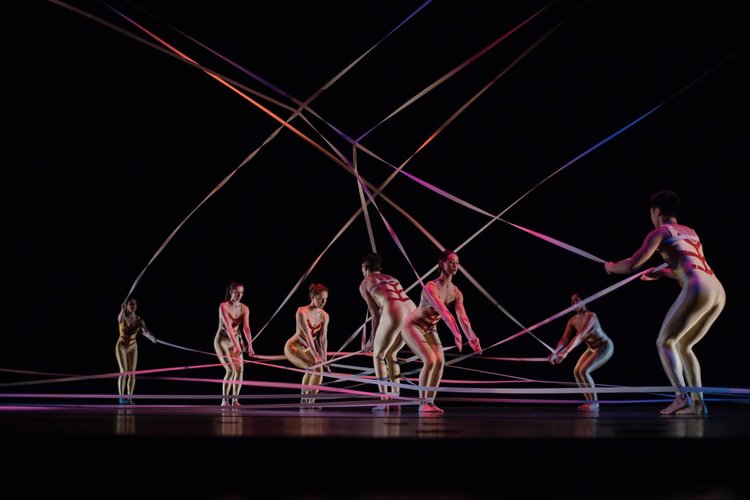 The work of Alwin Nikolais presented in Ririe-Woodbury Dance Company’s Strata spanned three decades, but the exploratory nature of Nikolais’ work appears to transcend time. What was once progressive still feels to be so; while others have emulated areas Nikolais pioneered, his own work maintains its sense of existing on the edge, despite the ebb and flow of many dance trends.

This article seeks to place the works featured in Strata within their original contexts rather than presume new observations and, in doing so, seeks to reveal how Nikolais’ choreography, concepts, and staging hold up, or even accumulate layers, as they continue to be performed and discussed.

Nikolais’ “Tensile Involvement” premiered in 1955; to place it historically, this was both the same year Arthur Mitchell first joined the New York City Ballet, later to become the company’s first African-American principal dancer, and the year the polio vaccine was approved by the FDA. Around the same time, Nikolais himself wrote the following in a piece for The New York Times:

“We speak of dance necessitating humanistic relationships and concern, but new semantic meanings of man and his relativity within our present historical strata are constantly being redefined. The tools of the dancer — motion, time, space, light, sound, shape and color — have greatly extended and altered in meaning during the last quarter-century.” (August 18, 1957)

Nikolais’ observation may be extended more broadly, but this is certainly an apt description of his own work and intent, as embodied in “Tensile Involvement” (if not equally embodied throughout his repertory). In the piece, dancers cavort, energetically but purposefully, weaving paths back and forth across the stage with long, ribbon-like cords. The dancers’ relationships to their environs triumph here; their relation to one another is important and evident, but is perhaps only a byproduct of the primary task at hand.

Withstanding the test of multiple viewings, the premise of “Tensile Involvement” continues to feel refreshingly new; arguably, the same holds true for the test of the span of decades since the work’s premiere. Perhaps this is also to credit the bright performance quality brought out by the spirit of the dance and the inherent quality of Nikolais’ movement: energy radiating from the eyes down to the metatarsals, and, in this case, even still outward along the full length of the cords, from the floor all the way up into the fly-space.

“Gallery” premiered in 1978 as part of a two-week run at the Beacon Theater in New York; in the same year, the U.S. would launch the first global positioning satellite and Yvonne Rainer would perform her iconic “Trio A” for the camera. New York Times dance critic Anna Kisselgoff wrote the following after attending the opening night of “Gallery”:

“[The] metaphor of an ordinary fairground shooting gallery representing humanity is typical of Mr. Nikolais’s way with a message. Yet it comes as no surprise that he also seduces his public with the dazzle and wit of his technique… It is one of Mr. Nikolais’s strongest works, in which he has achieved a great deal of variety within self-imposed restrictions.” (April 20, 1978)

Nikolais’ success in fully exploring one idea, living within restrictions set in place by a specific world, was a recurring impression throughout Strata, but especially in “Gallery.” Harkening back to composition class, the idea of exploring one thought completely before moving on to the next is tantamount to choreography; a thorough exploration is akin to sweeping out all the nooks and crannies, unlikely to leave a viewer wanting.

“Gallery” is an embodiment of such thorough exploration, as it twists and turns through various iterations of similar themes. The dance’s dominant imagery consists of red and green targets, bobbing heads, DayGlo masks, and dancers serving as abstractions of goofy yet macabre caricatures. While far from appearing human, the mime-like performers still elicit human responses from the audience — laughter, shock, discomfort, surprise — in their odd renditions to an eerie sound score.

At first, the cast of “Gallery” seems to be in control of the fairground shooting gallery they inhabit: popping their heads up and down, going in and out of view, swirling back and forth along the counter they are behind, doing the backstroke, eventually creating elaborate counterbalanced shapes on two stacks of tables in front of the counter. But by the end, all are compelled to return to the confined gallery space from whence they came, and are subjected to invisible projectiles that render the mask-like targets in front of their faces shattered. Were they ever in control? “Gallery” explores such a full range of possibilities within its parameters that it seems for a time that they are.

And 1980 saw not only the premiere of Nikolais’s “Mechanical Organ” but also those of the Pac-Man game, Star Wars’ The Empire Strikes Back, and Salt Lake City’s very own Ballet West in New York City. Nearly a year after the debut of “Mechanical Organ” at the Spoleto Festival in Charleston, South Carolina, Kisselgoff observed the following after a Nikolais Dance Theater performance at City Center:

“An ensemble precedes the best moment, a solo beautifully danced by Marcia Weadell-Esposito. Like a lean wildcat pacing in her cage, she darts and whirls, discovering her own shape and yet still alluding to the mannequin image, her own head lolling atop her neck…As a pure-dance piece, “The Mechanical Organ” is as good as its choreography. It does not seemingly aim for the philosophical resonance of ‘Gallery.’” (February 12, 1981)

Mary Lyn Graves, in the solo described above by Kisselgoff, is a highlight of Ririe-Woodbury’s staging of “Mechanical Organ.” Quick and crisp, elegant and elongated, Graves’ performance of the doll-like solo was a perfect balancing act of precise attack and languid release.

Throughout “Mechanical Organ,” specifics of choreography remain of greater interest than the dance’s conceptual arc. While a divergence in that regard from other pieces in Strata, there was still delight to be found in Juan Carlos Claudio and Bashaun Williams’ virtuosic duet, in which they leapt over and rolled under each other, and supported each other in hinges and other counterbalances, and in an all-male quintet that took place largely on the floor for a transition from male bravura to more meditative contortions.

“Mechanical Organ” features a sound score composed and edited by Nikolais himself, who forged a new path, technologically speaking, in 1964, when his company commissioned the first commercial Moog synthesizer. Nikolais used a synth to create jarring, discordant, computer-y sound scores for decades of dances, including for all those featured in Strata (all the program’s scenic and lighting designs are also his work).

In 1985, the year Nikolais’ “Crucible” premiered in Durham, North Carolina, at the American Dance Festival, many now-common technologies were in their infancies, including the Internet Domain Name System, the Nintendo home console, and Microsoft Windows. William Forsythe’s first collaboration with composer Thom Willems was in 1985, the year following Forsythe’s appointment as director of Ballett Frankfurt. Jennifer Dunning wrote about the opening night of “Crucible” at ADF for The New York Times:

“One cannot help feeling that Mr. Nikolais will continue to play with ‘’Crucible,’’ which doesn’t look quite settled in. For the piece is almost at odds with itself after its first stunning and amusing moments. ‘’Crucible” begins with a play with mirrors…and the nudity is meant to be one more abstract element…As is often the case with stage nudity, the bodies do become abstract and asexual very quickly. But as ‘Crucible’ now stands, there is little eloquence to this design with bodies beyond a play of shapes and patterns.” (June 16, 1985)

“Crucible” employs optical illusion to create its otherworldly choreography; a sloped mirror duplicates hands, arms, and legs that poke upward, first like flora, swaying and multicolored, then metamorphosing into fauna, pecking and chopping. The emphasis here is truly on form and limb, and the kaleidoscopic imagery is successful due to the abstraction of bodies, which enables the eye to see a whole rather than a sum of many.

However, as the dancers begin to reveal more of their bodies above the slanting mirror, the abstraction wavers. Though the original nude dance thongs are forborne here for more SLC-friendly nude unitards, the focus very quickly shifts to the human body as, transparently, a conglomeration of its parts; the audience audibly tittered and even whistled as the dancers turned (the illusion of) nude rear ends to face them.

Viewing “Crucible” now, much may have settled that Dunning felt was incomplete following the work’s premiere. And, rather than sharing Dunning’s skepticism at the success of bodily abstraction, this writer wondered what lay at the heart of the interplay, even conflict, witnessed in “Crucible,” between the abstracted body and the human body. Through barriers of costuming, lighting, distance, and concept, the dancers’ bodies still appeared as unrelentingly un-abstract to many in the audience. It is a testament, perhaps, to the power of the body to announce itself, no matter its additional trappings.

By their very natures, history (both dance and otherwise) and technology have barreled ahead since the premieres of “Tensile Involvement,” “Gallery,” “Mechanical Organ,” and “Crucible.” But Nikolais’ singular and inventive use of lighting, projection, sound, costuming, concept, and movement still elicit strong response. Among a relatively small canon of enduring choreographers, Alwin Nikolais has proven what is unique about a dance may remain so, and that new layers may even be acquired in a dance’s lifetime. This writer fancies that is because of, rather than despite, not only continued performance of the work but continued conversation and criticism surrounding it.