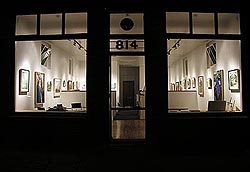 Fellow bibliophiles may recall the Marginalia Bookstore, on the 800 block of 100 South in Salt Lake. The front part of the store was filled with stacks of well-selected used books. The bookstore continued into a darker, more intimate space in the back, with cashier and reading spaces. But unless you remember the exterior well, you probably wouldn’t recognize the place now.

Some years ago, the bookstore closed; and though its loss meant one less place for books, its transformation gave me one more venue for my other love — art.

David Richardson and Capitol Hill Construction took over the building and transformed the space. They created low lying walls to form cubicles for working areas, but the space now is airy, light, and deceptively large. Perfect, in other words, for hanging artwork. Which is exactly what they have done. Mild mannered architecture firm by day, Exhibition space on Gallery Stroll nights and by appointment.

Richardson is a fan and patron of the arts and enjoys using the space to promote local Utah artists.

Gallery 814, as the architecture firm’s alter ego has been dubbed, has been hanging artwork since December of 2001. Richardson’s tastes tends towards modern art, and he likes to provide an alternative space for alternative artists. While the cubicle spaces require pieces not too grand in scale, the front area does allow for some larger pieces, including, at times, sculpture.

Gallery 814’s shows generally hang for eighty days and take advantage of the SLC Gallery Associaiton Gallery Stroll night for their openings. Richardson says they are eager to accept exhibition proposals from artists.

Currently showing at Gallery 814 are two artists with extraordinary pedigree, Tom Kass and Claudia Pollard. Kass is a graduate of Cooper Union at it’s post-war height and studied under Joseph Albers. “His serious work is an extension of Albers’ studies, ” Richardson says. “And his playful work is just plain fun. Pollard is a graduate of Cranbrook and specializes in textiles, she also works on canvas and in sculpture. Both have won international awards.