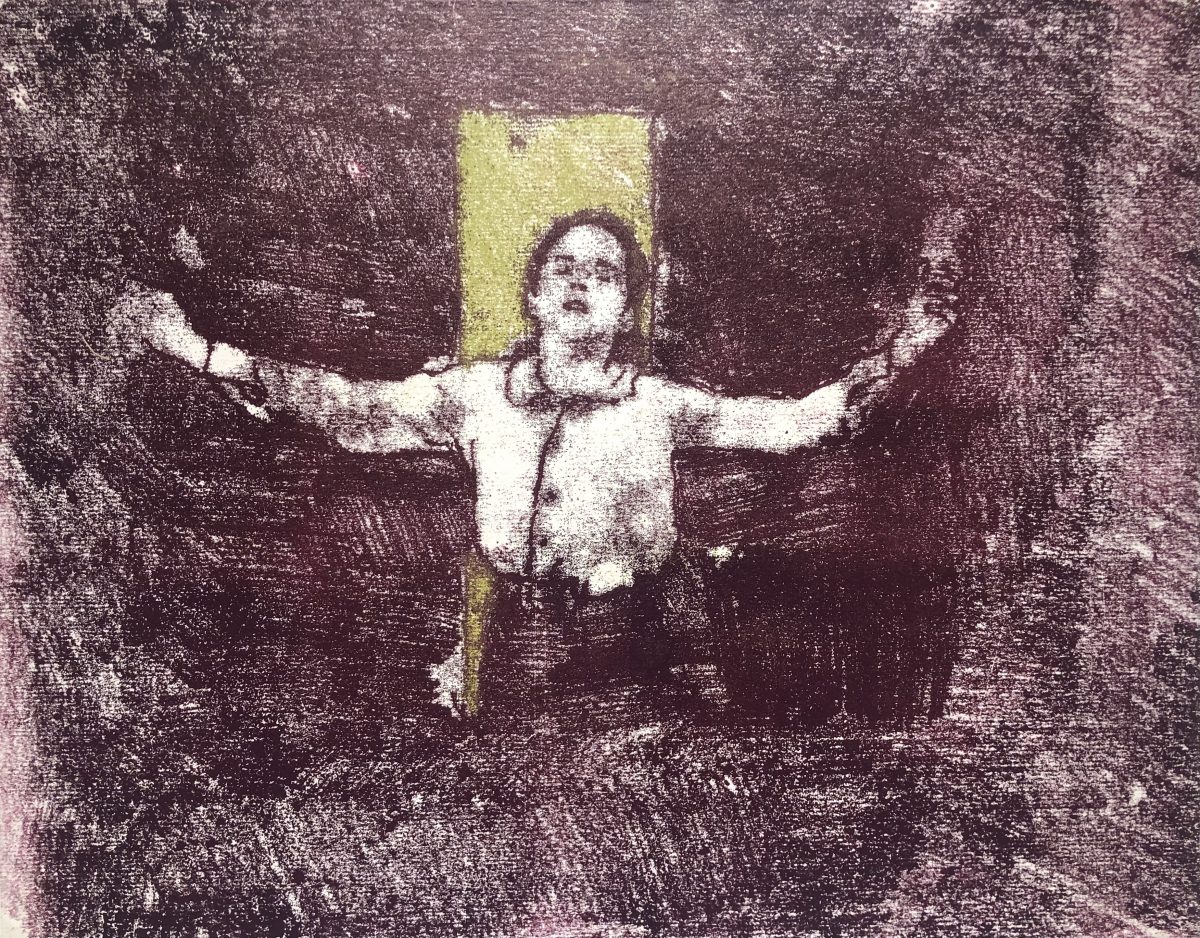 Photography brought many things to the visual arts, like permission to cut a figure in half at the edge of the canvas, or leave some undesirable empty space, neither of which was done much, if ever, before the camera made them necessary and convincing visual facts. The shutter also caught expressions that were too brief or ambiguous to have appealed to earlier painters, but turned out to reveal what’s going on inside a subject as well as, or better than, posture. In Loose Limbs, Aloe Corry plunges even deeper into the uncharted significance of what goes on inside a subject being represented. Perhaps she remembers the artists of the Renaissance, who began their drawings with the skeletons and muscles, believing that the figure could not ring true unless such basics were understood first.

To better explore the cognitive and emotional state of her subjects, Corry, who calls herself both an artist and an author, combines visual imagery with words, phrases, and entire poems. As artist, Corry works in traditional oils and collage and sometimes uses found materials, but her most characteristic mode of expression is monotype, a medium she employs without becoming intimidated by its traditional, pure form. She may draw further on the finished print, or cut it out and collage it elsewhere. The important thing is the alchemy of mono-typing, which because it lacks the sharp, tooled edges that characterize prints from wood, metal, and stencils, gives the result a lively, even molecular intimacy all its own. 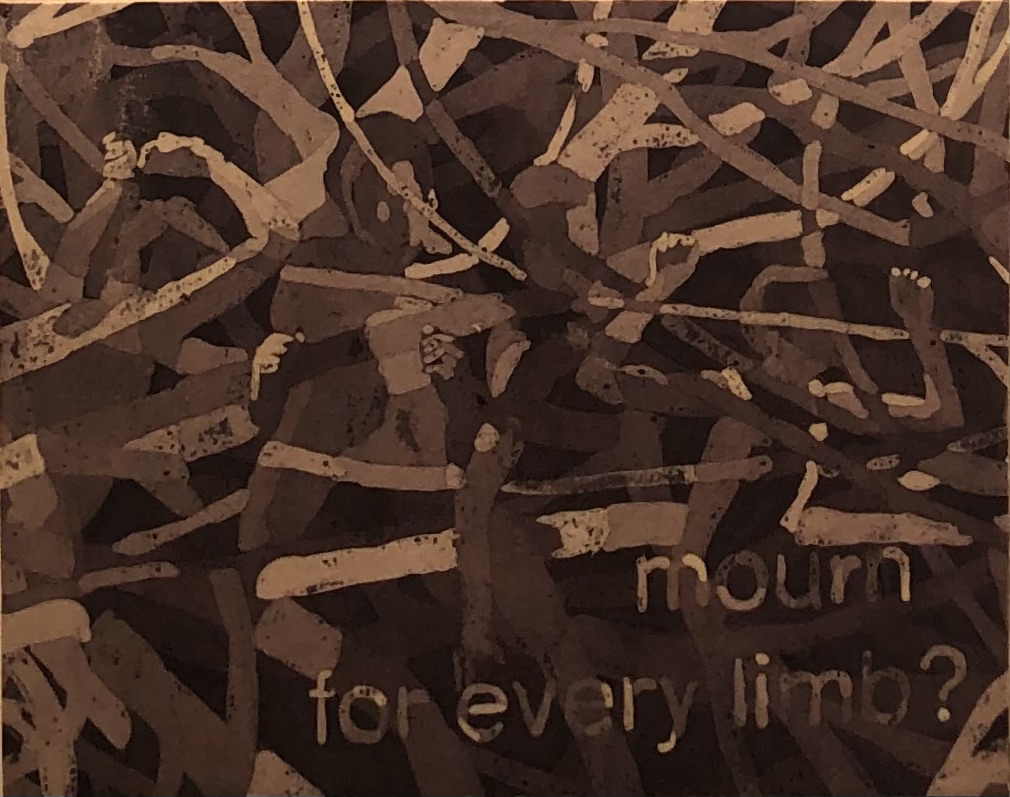 Monotype also corrects the misunderstanding that makes a casual identification of “printing” with multiple copies. A single print is still a print; what makes it so is its mechanical rather than manual production: that extra step a printer takes to produce a specific effect, which may be temporary on the plate but is fixed in the print. In Panacea, or Conversations With the Lobster, an artist book not included in Loose Limbs, Corry writes, “but contained in his injuries are also the cures.” This could be a description of monotype, in which elaborate and fragile work on, for instance, a printer’s plate or sheet of glass, becomes permanent on paper. What could be an “injury” in the original drawing or painting nevertheless contains the final, “cured” version.

Loose Limbs draws parallels between the stems and branches of plants, especially trees, with the arms and legs of humans, limb to limb. Drawing from various alternating sources, Corry collages together texts that switch back and forth between instructions on the grafting of plants and the repair of bodily injuries. Some of the sentences may refer to how an arm, for example, may be injured, or how it feels. Elsewhere, splinting is discussed and demonstrated. While neither the text nor the illustrations are titled, they repeat themselves and each other in ways that make her insights abundantly clear.

At the center of Loose Limbs are six colorful panels displaying damaged, reconstructed, or reimagined bodies. Posed on a deep red background, each variously combines identifiable body parts with matter only a pathologist might be able to parse. One of them, including a jawbone, some still-articulated vertebrae, and part of a trachea, looks like it might have come from a mass grave, or perhaps been found in the ruins of the Twin Towers. But that makes them sound morbid, and there is nothing so negative about Corry’s view of the human condition. One way of viewing these is that they are free associations, like improvisational music, only with anatomical images in place of notes. This suggestion, that they are spontaneous in nature, is more satisfying, though it still doesn’t do much to explain why.

Our culture has undergone a revolution in the past half century: one that is still ongoing and incomplete. This revision has to do with a greater candor about both our bodies and our fates. Less euphemism is evident in many places, including entertainments, documentary facts, and images that were unimaginable until recently. Seen in this light, Corry is only being objective when she acknowledges that our bodies are fragile and ultimately mortal, but capable of remarkable adaptation and regeneration along the way. She has challenged herself, and us, to a dialog anchored in a more complex, realistic vision of life than has acceptable before now. 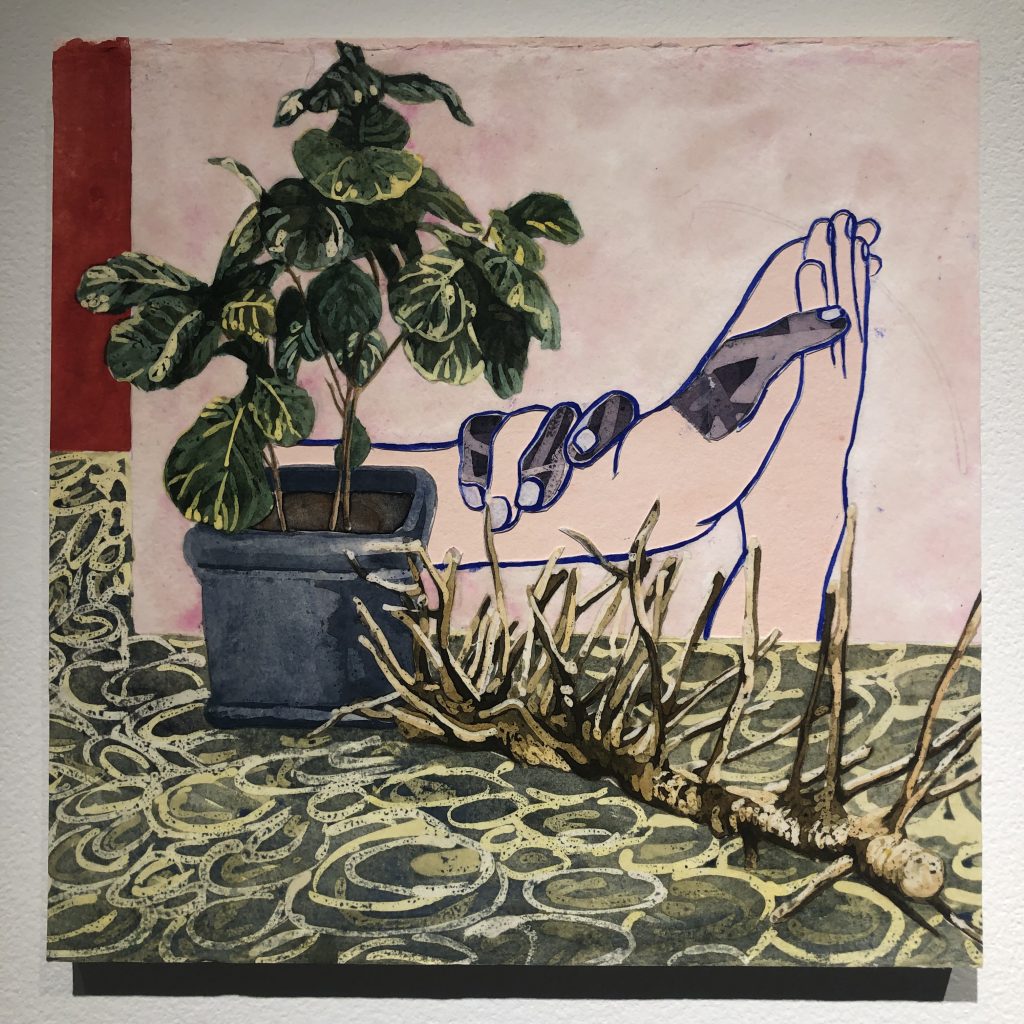 (all images by Geoff Wichert, from Aloe Corry’s Loose Limbs, at the Utah Museum of Contemporary Art)