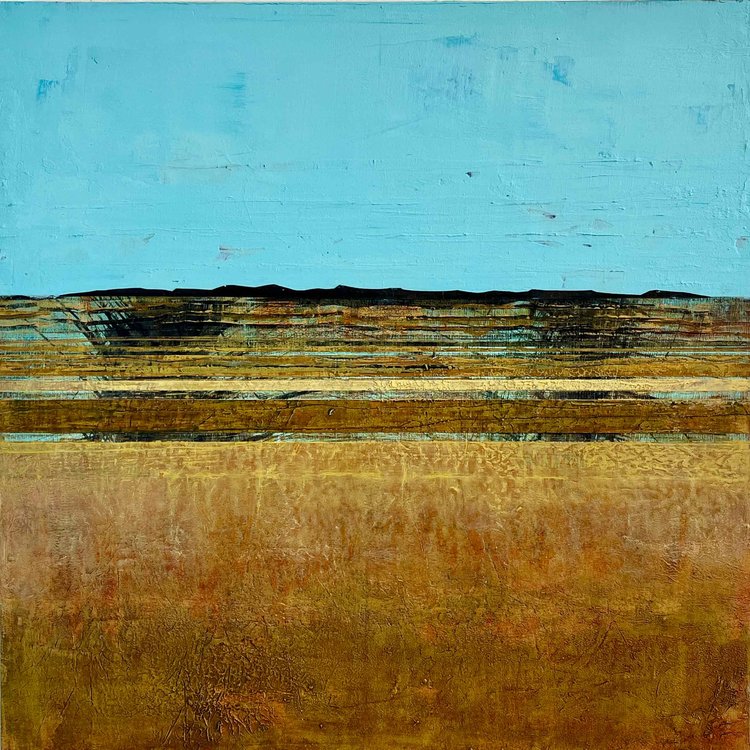 If there’s such a thing as a leading strategy among Utah artists in the 21st century, it most likely has to do with working in layers: physical, metaphorical, conceptual. For some it’s the traditional array, from primer coat to underpainting and so on through glazing. For others, it’s mixed media: conventionally distinct materials applied in layers over each other. Quite often, the layers are not so much physical as cerebral, in which different layers of reading present themselves to the mind.

The painter Jeff Juhlin often does all three on a single work of art. This is possible in part because prior to his new works, which he calls “Landlines,” he worked primarily in encaustic, the wax medium pioneered by the Classical Greeks. Encaustic frequently constitutes a mixed media all by itself, such as Juhlin’s encaustics that typically begin with a black-on-white, painted ground to which he applies layers of wax, paper, oil paint and other materials. These layers become like those that inform geologists about the passage of time, or suggest the laying down of experiences in memory. 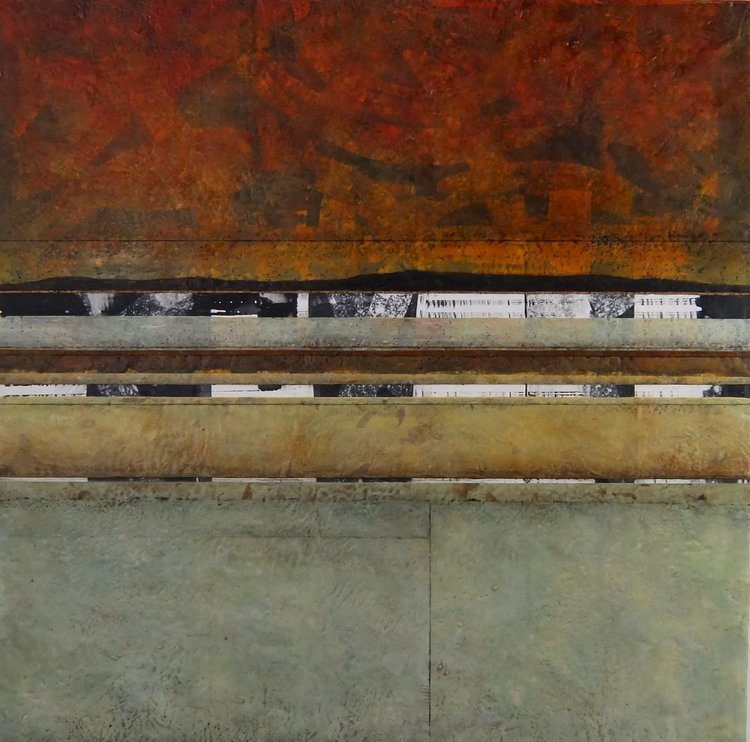 Once the panel is hung on the wall, though, these bottom-to-top layers will be oriented front-to-back. In applying them, Juhlin further arranges them to create the appearance of layers in cross-section, spaced variously from top to bottom, in the final image. “Stratum 26,” a recent example of this style that hangs alongside the “Landlines,” provides a good example of the overall result, including effects produced by pure color, pure texture, and combinations of color and texture. The depth to which the eye can penetrate, and with it the illusion of depth, varies depending on the wax. Occasionally a fleeting impression of landscape appears, or a hint of some other subject matter, but the assembled layers predominate.

In the “Landlines,” however, Juhlin has taken those occasional hints of landscape from his encaustics and run with them, exploiting the relative suppleness of oil applied with what looks like some of the same techniques used in painting with the more stubborn wax, to produce an effect of great distance, and with it space. The result retains much of the abstract appeal of the encaustics, their sense of limitless imaginative possibility, yet sets it in play along with a feel for the vastness of the Western scene.

It is unlikely that the “Landlines” will displace the encaustics entirely, nor should they: like the actual geological layers formed in the Earth by gravity, which can be used to measure time’s passage, the layers of mixed media represent how memory builds up to become an identity. Time and memory are primary concerns of Juhlin’s, and subtly influence the way he layers the colors and textures of his encaustic medium.

However it came to him, Juhlin’s new work is a dramatic break with the past. Generally speaking, there is a horizon line and a suggestion of sky, which are key elements in his stated desire to capture the glorious character of the Western landscape. Often there is a suggestion of geological layers that have been broken, upthrust, and weathered. In “Landlines 14,” the effect is to divide the view into a near patch of plain ground and a distant zone of compound textures, some of which suggest mountains or hills. It’s not a literal scene: the details are not in scale and don’t present a coherent desert view. But they do create a powerful impression that the eye and mind accept, even as they create a pleasurable sensation not unlike the familiar response to certain places. 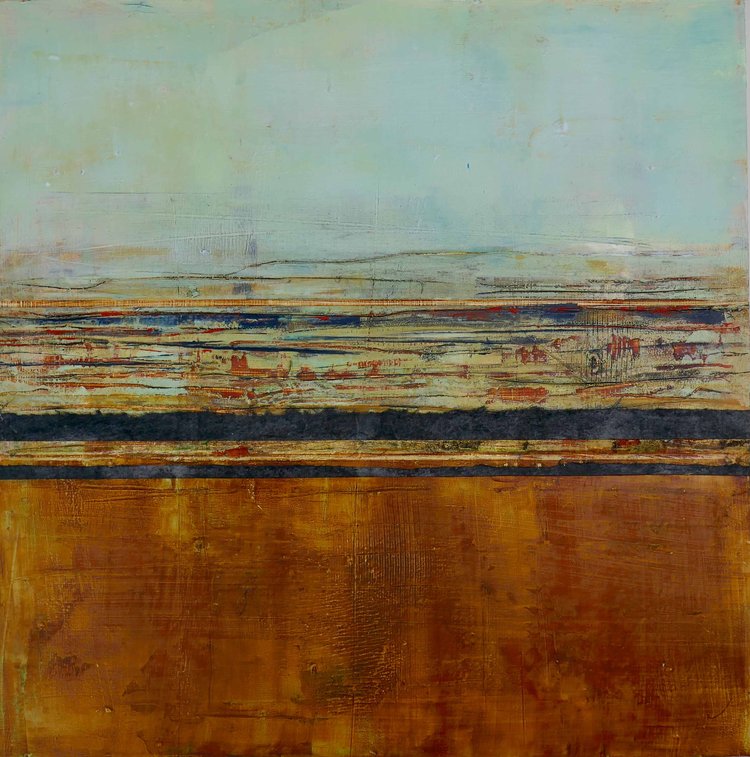 In person, it quickly becomes apparent that Juhlin has not abandoned the plangent abstraction that has made his work so strong in the past, where the painting doesn’t re-present, but presents. The land and desert are of course real subjects and clearly visual, but these landscapes are still felt as much as seen. “Landlines 8,” appears to have been painted not on the panel, but rather on an intervening layer of cheesecloth that lends its texture to the paint in some places, but in others breaks up, suggesting an antique textile or painted canvas that’s disintegrating — or, of course, the land itself crumbling due to exposure and weather. It’s stunning, beautiful, and recalls how rust, rot, disintegration, and other forms of decay can be transporting and unnerving at the same time.

The specific landscape that comes closest to classic Juhlin is “Landlines 10.” The parallel, cursive forms just above the midline and reaching towards the sky suggest a rising middle ground, even as they seem to stretch out so far they separate like so many ribs, or the slats on a window blind, through which a pair of black figures, such as might lie beneath the wax layers of an encaustic, are clearly seen. In this the painter makes free use of his skill to present two contrasting visions that occupy the same space simultaneously and proffer a glimpse of something otherwise hidden.

There are about twenty individual paintings in this show, no two of which meet the eye in quite the same way. Enthusiasts for Jeff Juhlin’s accomplishments over the years will not want to miss the chance to see this body of work in its entirely, together in one place. 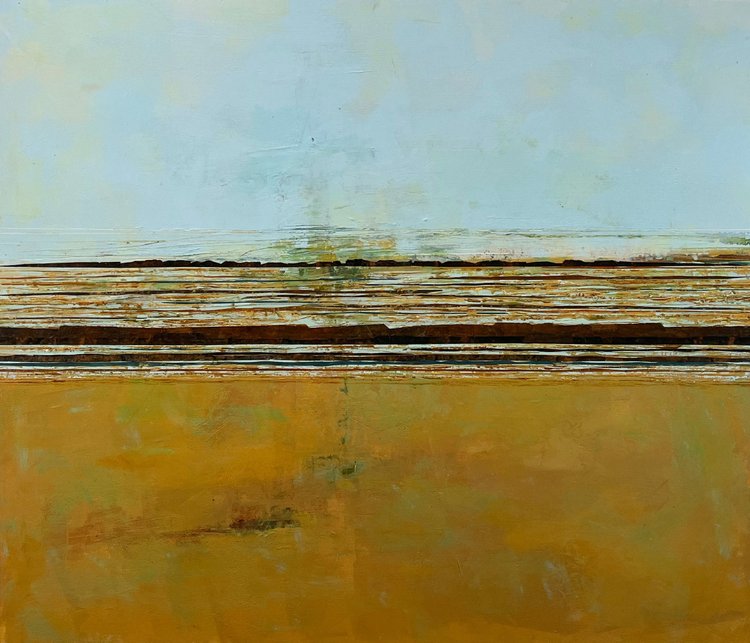