Palomin and the Raven: Alexander Hraefn Morris at the Gittins Gallery 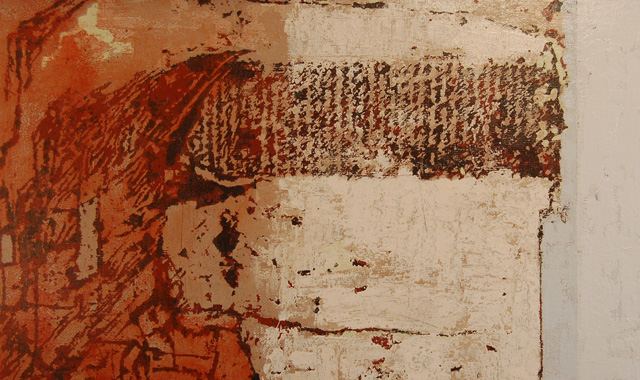 Alexander Hraefn Morris says he recognizes a spiritual presence within him, and we can see this expressed in one of the artist’s more direct works of abstraction: “It Takes Note and Attempts to Understand” is a 9 x 3 foot triptych that abstractly maps the Cottonwood Heights area Morris grew up in. A thick blue line across the canvas depicts a route frequently taken by Morris, and along it the artist has described, in verse, his search for a true companion.

The triptych has overtly Taoist implications. The path Morris has chosen has progressed through a numberless series of choices along life’s journey. Fascinatingly apropos of this progression are the piece’s linear fragments, that are not just explicative formal details with acute stylization, but also represent crossroads at which choices must be made, turns taken: the entire Taoist reality is of a sudden utterly and completely altered only to be affected by the next fork in the road.

Morris’s own journey is still relatively fresh — earlier this year he graduated from the University of Utah with a BFA in drawing and painting — and already promising — his long piece “Release” was selected by juror Meri DeCaria as “Best of Show” at the University’s BFA exhibition in April; and, along with Kyle Odland, he was awarded the Howard Clark Scholarship, which provides the two artists with an exhibition at the University of Utah’s Gittins Gallery November 14-December 16.

The works Morris will be exhibiting at the Gittins show are powerfully expressive abstract narratives executed through a spiritual lens, the artist guided in all matters by substances of the spirit documented in paint. They are characterized by a stunningly fine abstract layering of paint, worked and reworked; colors in subtle gradations or tones; generalized areas of demarcated space and texture; line seemingly jutting from nowhere to nowhere. Everything to the most minor detail is used purposefully in an aesthetic that is structurally and spiritually bold and resonant of personal artistic intensity.

Though fully appreciable for their aesthetic qualities of line, color and texture, Morris’s works are also filled with an evocative if sometimes private symbolic quality. Though rough and sometimes barely delineated, these symbols reappear again and again in his pieces. They form a personal mythology that stretches back to Morris’s youth, when friends called him wolf-bird, an ecologist’s term for the raven, the predator that the wolf would follow to its prey. The image of a slightly anthropomorphic bird appears and reappears in Morris’s paintings, sometimes as multiples, other times transformed to hazy lines or blotches of paint.

This raven figure joins another recurrent element, an “empathetic guardian” the artist identifies as Palomin, and which is a pastiche of ancient Egyptian and Judeo-Christian deities. It is a spiritual other to the artist’s figure of the Raven, representing both a protective or guiding spirit, as well as the figure of the artist’s wife, his true companion.

A prime example of these elemental, conceptual and symbolic qualities can be found forming a majestic symbiosis in “Hoarse Cries.” The 4.5 x 3 foot work at first seems entirely cryptic and all that may be detected is the crude and rough form that looks as if it may or may not be referential — this is a pervasive quality of Morris’ work, as the deepest secrets are found from within. As these are discovered and as one finds oneself talking with Morris, there is fantastically no limit to the depth of meaning these crude elements can reach.

Familiarity with Morris’s work helps one detect the form of the Raven at the left with its upper body and neck taking the base of the canvas while the neck arches upwards with just the tip of the left wing visible, marking the difference between the static and the violent. This is no calm and stoic raven but one with its beak gaping wide, a stream issuing forth from this immense beak like a funnel of fire.

In the ferocity of this mass, ferocious enough to make a raven’s throat coarse, is not fire but language, the language of the Raven, the language of Morris’s “other,” a language of a different space and place only known by the Raven.  But! His cries are stopped short. A rough wall delineating a void of the lightest gray infused with the subtlest tint of blue stops his coarse cries. Is it, though, a void or is it the space of Palomin, the space of purity that fuses with the Raven’s cries making them pure?

Here is a narrative of such refinement as to counter the roughness of the surface material and make manifest the traversed distance and life attainment on the Raven’s experiential journey as it binds with Palomin. The rawness is an oblique symbolism as it is a means to an ends, beginning with the blotched and sketchy raven with spills and spoils covering it, the universe that surrounds it, one that is densely opaque yet allowing for the dissolution of masses. The language that issues forth from the gaping mouth is just this and Morris has symbol by symbol inscribed an impromptu language of his own, which is at once the Raven’s also.

Structurally, Alexander Hraefn Morris’s paintings are finely executed works full of wonderful abstract qualities like form, line, texture and color. In addition, fused with elements of his unique symbolic mythology, they become multi-layered multi-dimensional narratives full of spiritual elements. The stories told may be inspired by the artist’s own life journey, but they resonate to include broader issues of human experience, making them both very personal and broadly universal.

Alexander Hraefn Morris’s works will be on exhibit at the University of Utah’s Gittins GalleryNovember 14th-December 16th. You can view more of the artist’s work at www.alexanderhraefnmorris.com