I saw the best minds of my generation” [Janis, Jimi, Jim, Kurt, Amy, the kid who lived around the corner] “destroyed by madness,
starving hysterical naked,
dragging themselves through the negro streets at dawn looking
for an angry fix,
angelheaded hipsters burning for the ancient heavenly
connection to the starry dynamo in the machinery of night,
who poverty and tatters and hollow-eyed and high sat up
smoking
in the supernatural darkness of cold-water flats floating
across the tops of cities contemplating jazz . . .

Written by Allen Ginsberg and published in his 1956 collection Howl and Other Poems, “Howl” rings as relevant today as it did then. (BTW, it generated an obscenity trial against City Lights publisher Lawrence Ferlinghetti and his partner.) For the past two decades, local poet Alex Caldiero has been performing the lengthy poem every five years.

It all started with the 40th anniversary premiere of the Six Gallery reading in San Francisco, which coincided (no coincidence about it, Caldiero says) with his own reading at the West Bank Gallery in Salt Lake City. He had been listening to a recording of “Howl” and studying the liner notes in which Ginsberg states: “Ideally each line of ‘Howl’ is a single breath unit.” Caldiero made several unsuccessful attempts. “Some of the lines were just impossible,” he says. “I knew I was not going to make it to the end . . . My breathing kept getting shallower and shallower and I was grasping for words and air . . . when, from some other part of my body, an unexpected breath came forth and I was breathing in a new way. I finished the poem and it turned out to be not a reading, but rather a ‘channeling.’ That is, not a supposed spiritual communication through a medium, but literally a directing of original energy from the body of the poet to the body of the text to the body of the performer/audience: a seamless trajectory of breath-sound-language-act. Or what I have nicknamed ‘Sonosophy.”’

Caldiero recalls that he was a nervous wreck before his first performance of “Howl” so he called Ginsberg “to ask for his blessing. He chuckled. That was the only time we were ever to meet: voice-to-voice, sound-to-sound. In retrospect, this seems appropriate for a sonosopher.”

Caldiero always sets up a makeshift altar at the foot of the stage, with a picture of Ginsberg and an offering of flowers. He explains that “this is an old Mediterranean custom to remember and pay homage to our beloved dead.” The world lost Allen Ginsberg in 1997.

Bookman Ken Sanders remembers: “Alex and I collaborated on the 50th anniversary of “Howl” and it was a feature presentation of the old Great Salt Lake Book Festival and drew more than 1,000 folks to the library. Alex and I have teamed up with the Utah Humanities Council for the 55th and now the 60th performance of ‘Howl.’”

Caldiero will read the poem with jazz musicians and with guest poets reciting their own work on Friday, Oct. 9 from 7 p.m. – 9 p.m. at the Salt Lake City Public Library Auditorium, 210 E. 400 South. Admission is free. Poster artwork is by Trent Call and a signed limited edition screen print will be for sale at the event for $35. Free “Howl @ 60” buttons will be given away while they last.

Says Sanders: “Ginsberg is the “20th century Walt Whitman and ‘Howl’ is the modern ‘Leaves of Grass.’ Sonosopher Alex Caldiero is our spirit guide through the complexities of ‘Howl.”’

Rumor is that this is the final time Caldiero will perform (or channel) “Howl,” though we were unable to confirm this. 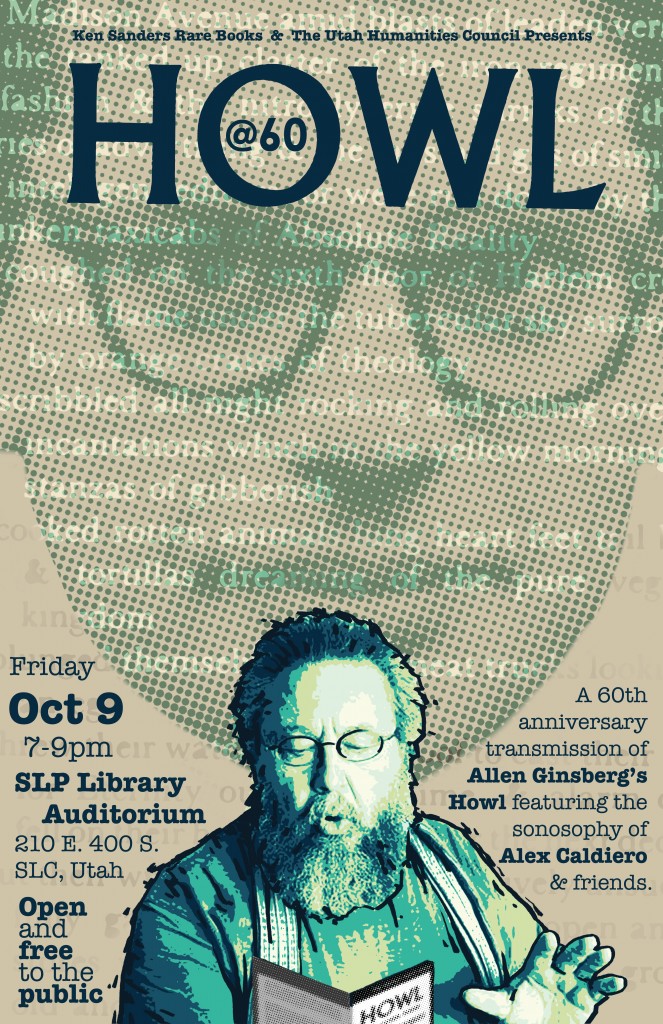