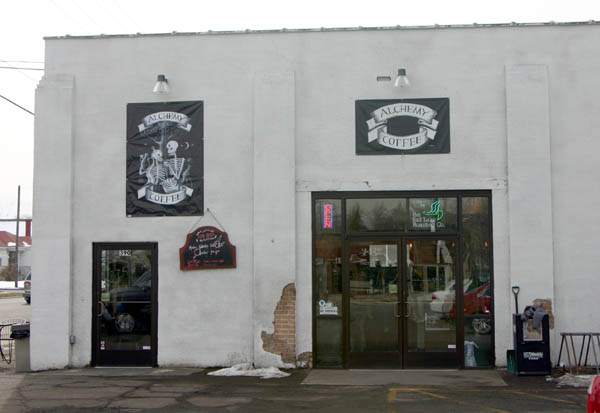 Tucked away at 390 East 1700 South, Alchemy Coffee is host to good brew, a comfortable, antique atmosphere, and local art. With exposed brick walls, eclectic, second-hand furniture, and an array of delectable beverages and snack items, Alchemy is a little gem just off the beaten path. 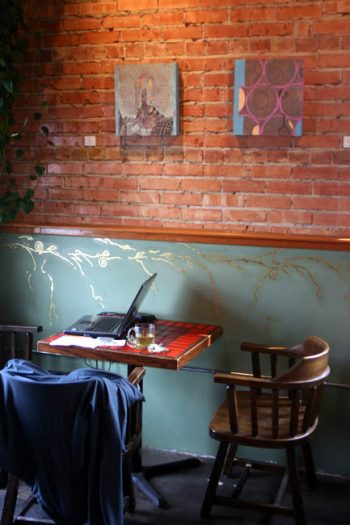 For owners Venessa Vetica and Jason Briggs being an exhibition space wasn’t necessarily their focus, but artists were frequently coming to them wanting to display their work. Caffeine hubs often serve as spaces for art, and this classy yet funky environment provides a space much like a living room to display just a handful of works. Paintings become more discreet and less isolated in this constantly changing environment; more a part of the décor than precious bits in a sterile gallery. This mingling of interior design and revered art is accomplished tastefully in the cozy space—you don’t get the idea that people are ignoring the work, or carelessly knocking it around as is often the case with coffee shop art. It’s an interesting, more casual break from an art show, and the shop doesn’t take a cut of the sales. This is because Jason and Venessa don’t want to interfere as curators; the artists themselves have the leisure to price their work more approachably, and hang it how they wish. “Our regulars anticipate new art with the monthly change,” Jason says. “It keeps the atmosphere from getting stale.” 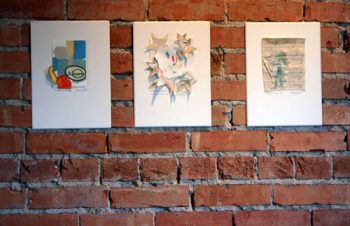 Alchemy’s current show includes work by Trent Call and Tessa Lindsey, former Poor Yorick artists and among Salt Lake’s favorites. Lindsey has five works: three small collage pieces and two paintings. “Lousy at Love After All” and “Now or Never,” the paintings in the group, apply a muted palette and thin washes to raw board, allowing edges and atmosphere to fade in and out. Affixed to the panel are thin pieces of wood cut into the shape of buildings with old floor plans printed or transferred on the surface. In the first piece (respectively), the composition seems to be fleeing toward the outskirts –the buildings only partially visible before dropping off the edge of the panel. In the second, they appear forced into the center, enclosed by a dark bold line. They seem to be vaguely obsessed, perhaps metaphorically, with isolation and architecture in an expansive and ambiguous landscape. Pencil lines surround the dwellings, further separating them from the space in which they reside. These structures are permanent fixtures; they lie however close together or far apart from one another according to where their foundations were poured. The environment around them may change with weather or development, but they will remain fixed in the same place. 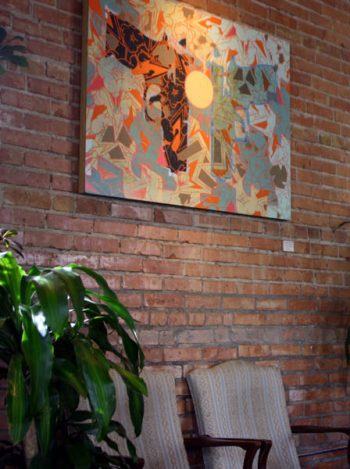 Call’s paintings combine design elements with stencil and brazen, explosive strings of color to create a labyrinth of buzzing lines. His panels are layered with spray paint, acrylic, enamel, shape, and line to ultimately yield the playful and well-resolved matrices and images Salt Lake patrons have come to know and love. “You’ve Been Had by Mr. Flamingo” illustrates a saturated, combustible example of these tactics. |3| Yet entangled in the bramble of calligraphy is a subtle ode — there is a method to the apparent madness. The careening lines actually form tessellations, and beneath them lies an image of a pair of handguns that reference the muse of the work. Although it’s often easy to get caught up in the masterful technique and design in Call’s work, there always seems to be an implicit theme that goes beyond poppy colors and booming lines — it just requires a closer read. In this particular piece it seems to remind that without the fiery fun of madness and intensity, we would be left uninspired.

Next month, Alchemy Coffee will feature a fairy themed show, with work from Jenni Lord, Sherri Pauli, and Samantha. Alchemy is also a hot spot for local music, with an elbow to elbow open mic every Tuesday, and live music on the weekend. 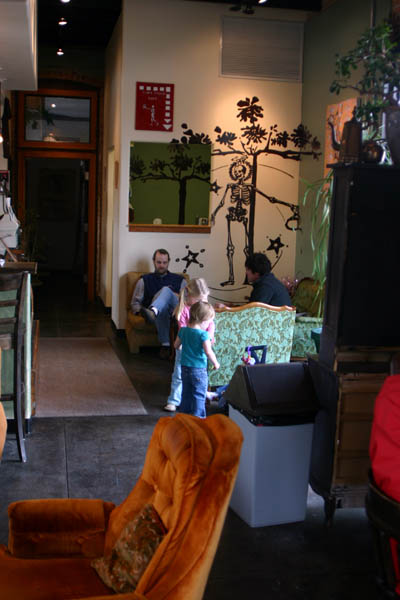