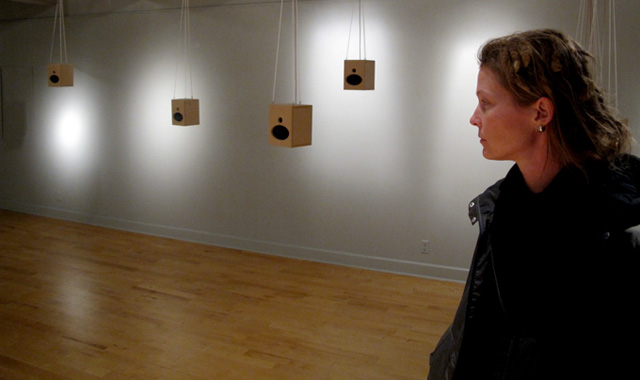 The Art
“…a lot of the deep confusion that beset me when I was a teenager, and the name Katelynn seemed stronger to me, less easily swayed by the people around me, so I wanted to embody that name… I mean Amy is amiable…”

Some works of art dictate to the viewer the passing of time, denoting a beginning and end, usually relating a narrative meant to express meaning. Art is equally as potent when totally abstract, removed from time, its meaning contained in and conveyed by the formal elements of its composition. Agency Randomness Chaos, a new exhibition by Georgia and Rob Buchert at Brigham Young University’s Gallery 303, is both and neither.

Inside Gallery 303, on the main floor of the Harris Fine Arts Center, you’ll find an assemblage of wooden speakers suspended at various lengths from the ceiling of the spacious, white gallery. It is an attractive setting — minimal and sophisticated – but the art is not something seen. There are no paintings. No sculptures. It is when you find yourself within the array of speakers that the magic of the show begins, as you are immersed in a sound art experience where the space between sound and the mind addresses fundamental philosophies of existence.

What emanates from these speakers are a variety of the following: original compositions by the “Buchert Mechanism,” pieces that might be best described as down tempo New Age; random sounds and tones that can be soothing or hauntingly melancholy, but seldom garish, and often surprising; and recorded interviews that feature an individual “who manages his agency in the context of events he didn’t expect or situations over which he may seem to have no control.” The recordings are programmed to play randomly, at greater or lesser volumes.

“…now, when people call me Amy, occasionally somebody I haven’t seen since high school will call me Amy… it sounds terrible to my ear… it just doesn’t sound right. I feel like I regress instantly, and my family will talk about me in the past tense, or they will talk about me as a child as Amy, which seems appropriate…”

Decontextualized, these words seem to float in the air without significance; yet while we are in this gallery space listening to fragments of an anonymous individual’s life and at the same time experiencing the resonating tones of music, with undulating intensity and irregularity of rhythm, this narrative assumes a greater depth. The words and the music lend a sense of animation and gravity to the oration so that the participant seems to experience a perfectly orchestrated moment. To the ear the music is there to support the abstract and fragmented narrative and this vignette adds substance to the music, making it a total experience. But it is not the ear that registers this totality. Rather, the mind creates it. The aim of this exhibition is to explore how and why this is so.

The Philosophy
“Agency Randomness Chaos is a metaphor for personal interaction with our response to elements, and an examination of how agency is exercised,” the Bucherts write. And agency, or free will, is a central concern for current philosophical thought.

When Freidrich Nietzsche declared God dead in the late 19th century he ushered in a wave of nihilism that philosophers have struggled with ever since. Without God as a fixed center of the universe — a belief adhered to and a vessel of order that stretches back to the beginning of human knowledge — what is there of life but a random reality? Nietzsche’s philosophy drained existence dry of any possible truths, and denying essential truths denies a recorded tradition of a core of humanity that dates to Plato and virtue. These virtues no longer have any credibility to philosophy in a random world where everything is chance and thus there is no possibility of authentic meaning to life in a universe of happenstance that disparages the past, offers no happiness in the present and denies hope for the future.

With the death of God, philosophy in the 20th century focused on questions of epistemology, concentrating more on pulling apart meaning than building it up. Some good came from the post-structuralism of Michel Foucault and the deconstruction of Jacques Derrida. Their philosophy, which showed the fallacy of binary opposites like black and white, fueled much of the civil rights movement, and inspired the feminist movement. But while it pulled apart false notions it did little to create new edifices for meaning.

Georgia and Rob Buchert’s sound project is an attempt to understand how we can construct meaning. In the face of nihilism, of the randomness we see in an ungrounded chaos, the Bucherts embrace free will to create meaning. Say the Bucherts, “The random tones and sounds have nothing to do with each other or the interviews, etc. but you will likely experience their juxtaposition as meaningful as you hear them broadcast.” The listener absorbs the various sounds, emotionally and cognitively, and creates a meaning from it. We might call it an existential approach, not identifying a capital “T” truth, but embracing our ability to choose meaning out of the randomness of life.

As the observer at Agency Randomness Chaos creates structure from unconnected events and sensory experience, so we do in life. Personal development has everything to do with free will and the free response to meaning not only dictates the outcome of how we engage socially but is a fundamental element in the creation of society. Although elements might in fact have nothing to do with each other, agency allows the individual freedom to make important life choices, creating an existence, not of nihilism, but of meaning. With this freedom of will and agency to choose, an individual may have power over his or her own life and reality. This encourages utilizing exceptional talents and abilities in education, skills for a meaningful career and adherence to spiritual or religious beliefs that are in accord with individual sensibilities. Agency is the freedom to transcend a state of randomness and challenge the blind chaos of nihilism. It is the freedom to change one’s name and one’s life.

Agency Randomness Chaos, a sound installation by Georgia and Rob Buchert, is at Gallery 303, on the BYU campus, through Jan. 14.