After Work Wednesday: The Art Salon Experience at Whitespace Contemporary in Ogden 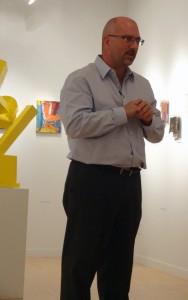 “It’s well known that while it’s only a forty mile drive from Ogden to Salt Lake, it’s at least a hundred and forty miles from Salt Lake to Ogden.” With tongue thus firmly in cheek, Scott Patria, co-founder of the gallery venture he likes to call a “low profit social enterprise,” gently vents the frustration felt by many of his neighbors in the Ogden business community—who frequently travel south along the Wasatch Front, only to encounter frustration when they encourage returning the visit. Having fought the same good fight from another direction, trying to encourage travel to the CUAC in scenic and historic Sanpete County, I sympathize. Consider: Utahns boast of a native contempt for distance, readily driving hundreds of miles to shop or visit family. So if it isn’t the distance, is it something about art?

In order to understand the challenge better, I recently resumed the mantle of enthusiastic and omnivorous consumer of art, music, and intelligent conversation to attend one of Scott Patria’s After Work Wednesday salons. And so I found myself in the Whitespace Gallery—conveniently located across Wall Street from the popular Ogden Union Station, accurately described on Google Maps as an “Old train depot turned cultural complex,” and surrounded by more-than-ample parking—on the evening of the third Wednesday in October. The doors opened at 5:30, allowing early arrivals to peruse the month’s exhibit (look for our review in the November edition of 15 Bytes) and partake of refreshments. The traditional salon began promptly at 6.

Patria favors a mix of attractions, including an art talk and author reading, leavened with live music and conversation. He asks one favor of his invited performers: that they try to relate what they choose to do with the current show and its themes. October’s offering included a hot young poet from the Weber College creative writing program, Quincy Bravo, who alternated readings with performances by the Amethyst String Quartet. Opening the evening, the widely-shown but seldom-seen Utah painter Jean Arnold talked about her art and answered questions from the audience. 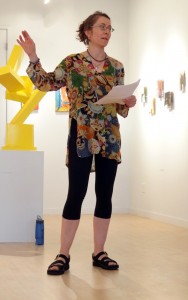 It’s gratifying for a critic when an artist independently confirms his broader thoughts about art, and Arnold began by doing just that, referring to a fundamental theme of her work as the “artificial division between nature and humanity.” She went on to label her paintings, made from moving vehicles and abstracting the view from within traffic “moving rapidly through an urban scene,” as “landscapes” none-the-less. Defending her choice of subject matter and its real-world references, she justifiably called it “Something we’re accustomed to, including speed, with no single point of view, but characterized by flux and impermanence.” Among its aesthetic characteristics, she argued, was a stress on structure brought about by the impossibility of capturing details that come far too quickly, encouraging fragmentation and spontaneity as strategies. In conversation with the audience, she explained that her colors are invented. She also described how, while riding busses (a kind of portable drawing studio), she came to see how at least half of the average American city has been built since the 1950s, taking for granted the sprawl afforded by what was then cheap oil. If there was a takeaway in her art, she said it might be that our private destinies are inextricably linked to public destiny. 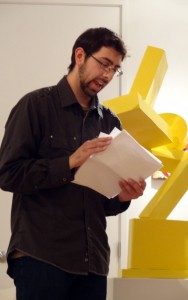 Readers of current poetry should recognize Quincy Bravo’s stress on original form, which has recently become the subject of wide-open experimentation. In the series from which he read, each poem juxtaposes a prose paragraph with a thematically related letter. If that sounds complex, it’s actually easier to follow than many more traditional poetic forms. Each poem began with a paragraph of deliberately crafted prose expressing, as so many conventional poems do, some thought of the poet’s. This was followed by a letter self-consciously written in the voice of a character who signed off using an invented moniker. Paragraphs and letters often responded to, or commented on, each other, though each could be also stand alone. The language was vernacular, the voice demotic, and the audience laughed harder as they caught his drift. As befits his youth and educational background, Bravo’s literary chops outran his performance skills, which might profit from exposure to, say, a poetry slam scene like exists in New York and elsewhere.

The invention of sound recording did immeasurable damage to the world of music. Most of those who would have made their own music in an alternate future now listen instead to an ever-more remote, industrial, and commercial sound. The Amethyst String Quartet are a partial antidote: they may not sound like professional soloists, but they allow those who would rather have live, acoustic stringed instruments at an event such as this, instead of a mechanical simulation, to do so. At the same time, they also partake of an alternative to the overwhelming popularity of antique music, instead offering living music from a variety of world music sources. For the salon, they were asked to prepare three works, but a last minute replacement of the second violinist necessitated scaling back to two. In their first feature, Palladio, a concerto grosso for string orchestra, English composer Karl Jenkins (b. 1944) mixes jazz and classical elements to produce music at once accessible on first hearing, yet complex enough to engage sophisticated listeners. After an intermission and more poems, Amethyst played an all-strings arrangement of the aria from Heitor Villa-Lobos’s Bachianas Brasileiras No. 5. Making such popular modern masterworks accessible in such intimate surroundings requires almost as much skill in arranging as in performance.

After Work Wednesday was made possible by funding from Ogden City Arts and RAMP (Recreation, Arts, Museums, and Parks; Weber County’s equivalent to ZAP). The current series includes one more salon, on November 19th. What happens then may well influence future opportunities.