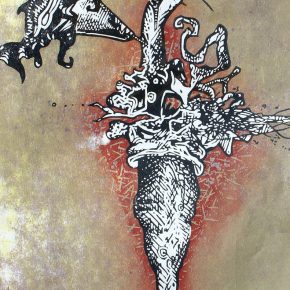 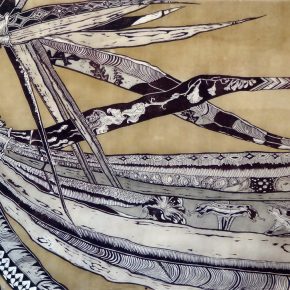 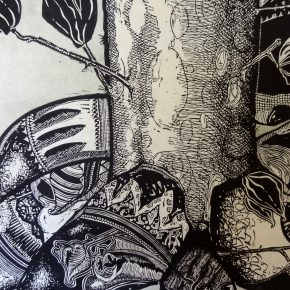 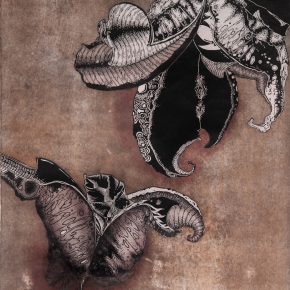 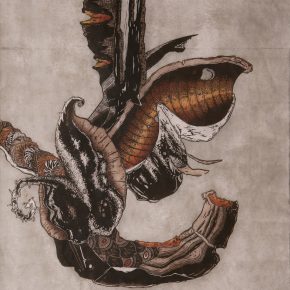 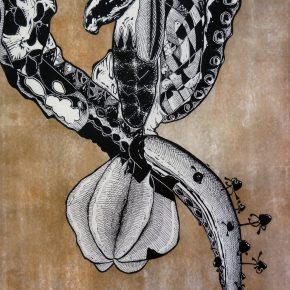 One of the more perennially popular genres of art, often done in watercolors that are engraved and printed—sometimes bound in albums or books, at other times framed in sets hung together on a wall—is the ‘botanical,’ a characteristics-displaying portrait of a plant species shown through an exceptionally complete and yet typical individual. A botanical ideally combines clear, scientific accuracy, often including the typical environment and insects or other companion species to be expected alongside the subject, with an exemplary aesthetic composition. These ‘flora’ bear comparison with ‘fauna,’ similar studies of animals, of which a primary example is John James Audubon’s Birds of America, a cultural treasure that can be seen on display outside the art gallery on the fourth floor of the Salt Lake City Library. Yet aside from such examples, with their unmistakable aura of Natural History, plants tend to appear in art as background, often in expressionistic pastiches, like those created by Henri Rousseau in images that deeply affected artists like Picasso and Gris and the collectors Leo and Gertrude Stein.

So there’s not a lot to see between art that means to transform the look of a plant into graphic form for its own sake on the one hand, and that excited by nature’s sublime menace on the other. Among the few who explore the historical desert that lies between is printmaker Abraham McCowan, who spends his time in the geographical desert of the southwestern United States and northern Mexico, an area of which he says, “While these desert regions are sparse, they are surprisingly rich in biodiversity.” Anyone who has hiked or just traveled attentively in this corner of the world will know he means that in place of large numbers of individuals, the desert features exotic forms not seen in less challenging climes. One tree, found almost exclusively in Baja, California, is so eerie that the botanist who named it borrowed a moniker from Lewis Carroll’s poem, The Hunting of the Snark, and dubbed it the Boojum tree. Taking inspiration from such daunting materials, McCowan is able to turn plants into visual meditations that combine close observation with ornamental creativity, resulting in a kind of fantasy landscape in which the topographic features of a plant stand in for the features of the Earth, while the ornamental details are freely drawn from what is, in the 20th century, a virtually universal language of decorative gestures.

Included along with his prints at Saltgrass Printmakers are a number of drawings, most apparently done en plein air, that give some idea of how the magic comes about. The principal challenge is just to make sense of such extraordinary plants as Saguaro, Organ Pipe, and Nopales cacti: hard-shelled plants so tough their skeletons often stand for years after the plants have died. Their capsules—skins to us—bear the scars of countless assaults, and when they bloom, usually rarely, the flower may emerge as unpredictably as a blade of grass peeking out from the merest crack in stone. Another artist might accept that, considering their bizarre architecture, just capturing the living form of such wonders would be enough. It would seem, though, that as McCowan contemplates the contrast of sunlight and shadow as rendered in his drawings, associations come to him that suggest ways to transform purely sensory marks (such as convention dictates be used to suggest three-dimensions to the eye where only two are present on the paper) into conceptual marks meant, in very different circumstances, to convey cognitive information. Thus a scrubbed-in shadow might become a herringbone or a wave-form: the more-that-just-descriptive names give away the game.

If the data that emerge from the surface detail of McCowan’s plants look familiar, that doesn’t mean they are meant to be translated, or must be in order to enjoy them. It’s enough that they draw the viewer’s imagination into the vegetable world. One onlooker commented that the roots of one plant, drawn in the Kaibab wilderness north of the Grand Canyon, appeared to be tattooed. One leg of the cactus shown in the print “Organ Pipe” seems covered with pressed flowers, while on another nearby, geometrical patterning suggests agricultural fields seen from the air. Elsewhere, classical cross-hatching vacillates between optically molding rounded surfaces and calling attention to itself the way traditional engraving tropes do on paper money, wedding invitations, and other classic applications.

Part of the pleasure—and quality—of these prints comes from their being woodcuts. Relief printing is always a negative medium, which is to say that the artist starts with a hypothetically black page, from which he removes areas where the medium—typically paper—will show through. While a variety of textures can seem to blend and soften the distinction between applied color and the support it’s printed on, many of which techniques can be seen here, the contrast is always locally absolute. This fact gives these woodcuts, with their bold patterning and intense use of color, a strong graphic presence, composed of strong lines and crisp, sharply defined visual information. As good as they look in small reproduction, their full impact is lost in this format; they need to be seen full size, which in McCowan’s work must be measured in feet. One print, titled “Feather and Spin,” is 8 feet long, and in fact extends several inches around the corners of the gallery wall at both ends. It recalls such over-the-top decorative examples as the door jambs of Romanesque churches, which were often rimmed by as many as a dozen concentric decorative motifs, each unique and each of which extended up the wall, around the arch and back down to the ground. So here one branch wears a creeping vine covered with flowers, another sports oak leaves, and yet another displays trumpet flowers, each of these possible motifs emerging from and submerging back into a garden of endlessly inventive marks.

My Foot is a Desert offers striking images that should unsettle even the most convinced perceptual and imaginative faculties. What looks like a vegetal profile becomes a cartoon caricature, while bird or insect parts assume the quality of sophisticated metalwork. Our eyes are drawn in to sort out the parts, only to become engaged in visual play that leaves the mind even more confused, but happy with the rapidly elaborating possibilities. Those seeking a moral may at first feel shortchanged, unless and until they realize that the intricate fit of living forms within the environments they inhabit, whether created or evolved, is the founding ethical principle. The continuity between these plants, as reimagined and elaborated by Abraham McCowan, and the spirals, pinwheels, stripes, and morphing grid patterns he draws on to further describe them, give a sense of the dimension of life, reminding us what a remarkable adventure we are privileged to undertake.