A Woman’s Place is in the Darkroom: Zuzanna Smolarkiewic’s a woman’s place? at the Gittens Gallery 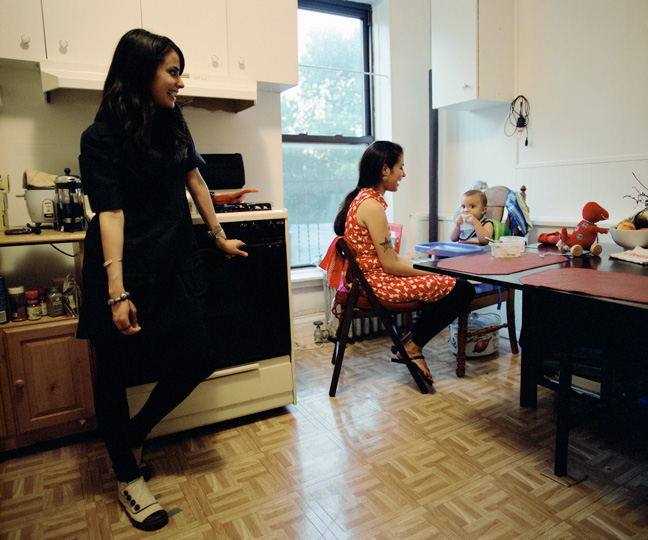 In a photographic portrait we see Alley, a young woman with olive skin and black hair, in a white room that doubles as kitchen and dining room. Her stance is too energetic to call a pose: she pivots on one foot like a dancing figure carved on a temple, her full length figure facing the viewer but turning into the frame. We see her face in profile, her nose echoing the thrust of a flexed knee. She smiles at the scene before her, where a woman who could be her sister or a close friend entertains a toddler in a highchair. The distant child is the only one who acknowledges the camera, staring out at us as though in a conventional portrait. The photographer has positioned her lens at an angle to the room’s walls, so that the converging orthogonal lines of fixtures and parquet floor reinforce the diminishing scale of the three figures. Everything is triangular, the triangles summarized by the one that starts with Alley, extends deep into space to the child, follows its gaze back to us, then pivots towards Alley to begin the journey again.

Zuzanna Smolarkiewicz is the rare artist who leaves little for a legitimate critic to do. It’s not just that she knows exactly what she wants to accomplish, or that she can explain herself in clear prose that doesn’t hijack language for ulterior purposes; it’s that what she achieves is pretty much precisely what she sets out to do. These thirty portraits intend to explore the old calumny that “a woman’s place is in the kitchen:” to see how well it accords with women’s lives today. Has the smartly dressed Alley traded her companion’s messy happiness for a career? Then again, isn’t this female society exactly where women prosper? Feminists and their foes could trade rhetorical positions and opinions about these lives, but Smolarkiewicz has the infinitely richer and more complex visual truth. If this were a nativity, wouldn’t Alley be standing in for Joseph? 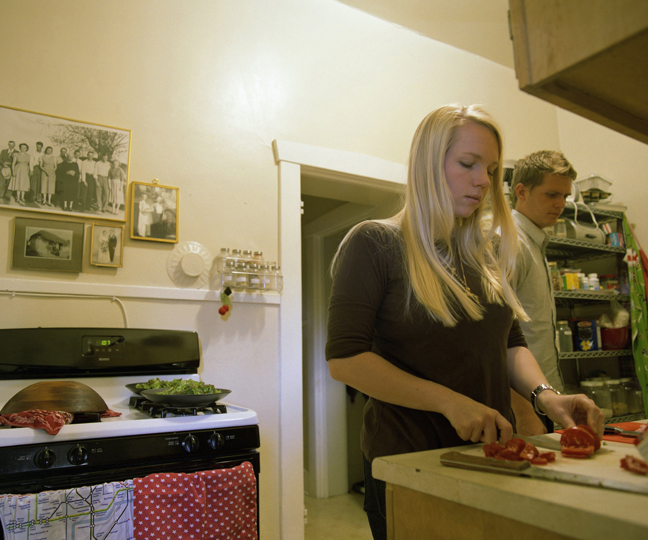 Smolarkiewicz appeared in these pages in June as one of three graduate student artists whose group show at the Rio Gallery, I Am You, focused on their common conviction that portraits are as self-expressive as any other genre of art. Eva Jorgensen, also in that trio, appears here as one of Smolarkiewicz’s subjects, her kitchen displaying some of the antique family portraits she uses to locate herself in time and space through vast, net-like images of her extensive family. Jorgensen’s prints and installations evolved in linear fashion between I Am You and her thesis show in July, while Smolarkiewicz moved forward on more than half a dozen parallel tracks simultaneously, each with a source in her own story and a unique visual presentation. Her snapshot portraits in I Am You were rough, spontaneous invasions of her friends’ space that also forced the viewer a little too close for comfort. They were what Marshall McLuhan called “hot,” and some viewers skirted her side of the gallery.

By contrast, vacancy—despite the giant “ENTER” sign that looms in the foreground of one image—keeps viewers at the kind of aesthetic distance that permits moving up close to the pictures. When she was a child traveling across the country with her family, roadside motels represented a refuge from life in the back seat of a car. They offered luxuries the family didn’t possess at home: color TV, swimming pools, and take-out food. Yet as adults, she realizes, most of us see them as nodes in the ordeal of travel, connected in our minds with uprooted lives, illicit encounters, and shameful purposes. Appropriate, then, that as adults we see this lost fragment of a child’s world from a distance, like a confection forever recalled but now closed to us. 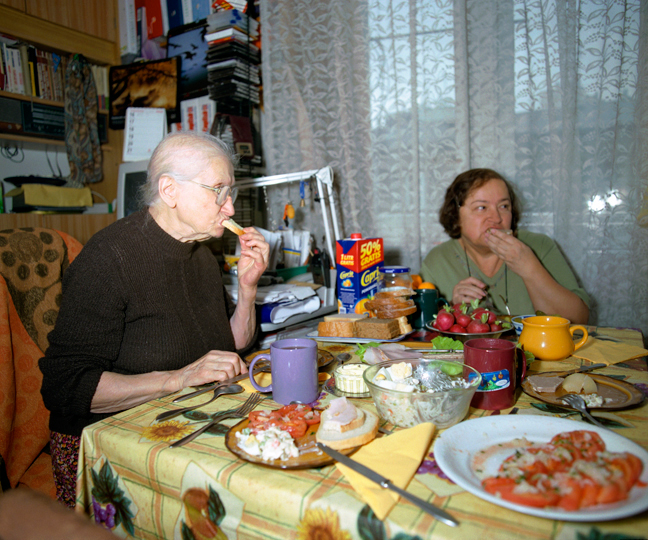 Compared to those projects, a woman’s place? is spacious and daylit. Most of the subjects are seen from far enough away that they appear full length. Some are in another room. Some are so far away, or turned away from the camera in such a way, that they would be hard to recognize from these “portraits.” Despite their candid poses and the photographer’s disregard for convention—the extent of which may be measured from the fact that one of these “women” is clearly a man—the overall effect is formal: thirty subjects, thirty kitchens. In each, the architecture is fully present. It often suggests, by its rotation from the picture plane and resulting diagonal perspective, the energy of the woman who dwells in it. In most there is a sense of enclosure, though whether it’s more like a cave or a cell may be for viewers to decide. Occasional windows or doors into another part of the house add a dimension. So, too, does the presence of men alongside these women, sharing their space. The equal companionship implicit in these is the flip side of the contented or self-absorbed solitude seen in others. In “Susan, Brooklyn, New York,” nothing breaks through the picture plane. Instead, Susan’s gaze out the window runs perpendicular to our gaze at her. Contrast that with “Brenda, Heber, Utah,” where Brenda and her male companion are seen in the distant kitchen, their small forms dwarfed by the lounge chair—a throne abandoned for now—that looms in the foreground. 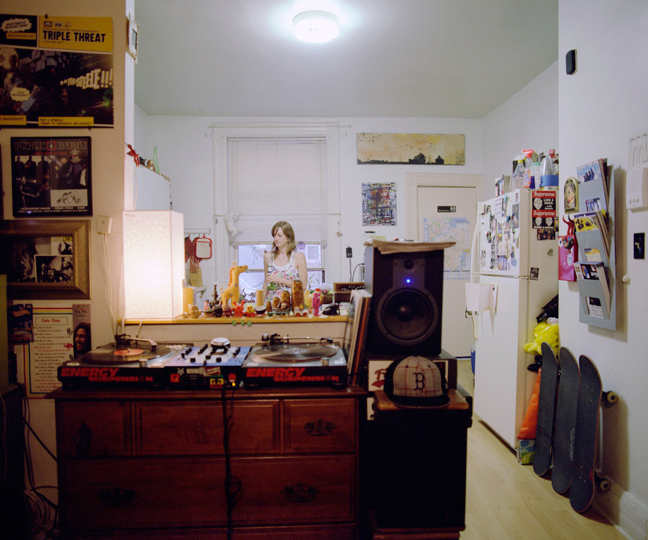 Two characteristics of contemporary photography are the snapshot aesthetic—a rejection of the high aims of classical photographers—and the construction of original subjects and even whole tableaus that are then photographed. Both to some degree capitulate to the fundamental predicament of photography as art form: that viewers tend to ignore the formal qualities of the photograph and only look at the subject. Smolarkiewicz has dabbled in both approaches, and appropriately for someone who is not only an M.F.A. candidate, but also a working professional photographer, a range of other aesthetic approaches and genres as well. But it now appears that her real interests lie is the ability of her medium to transform an avalanche of visual data into a dramatic encounter with parallel lives and at least one parallel consciousness. So she gives herself the freedom of those Baroque painters who presented their kings and queens as if they were just another element—sometimes quite small—in a vast canvas in which the artist’s skill was part of a universe revolving around them to their glory. The difference is that she, like the video artist Bill Viola, sees Baroque art as its creators could not: not as the product of kings and queens, but as something they themselves created. As an artist, then, she can concede neither the content nor the form.

So the best way to look at these photographs may be as dramas, or as windows onto ordinary lives that just need to be looked at in a certain way for their dramatic truth to emerge. Anyone who hasn’t tried to slip a large format camera into a quiet domestic scene probably can’t fully appreciate what the photographer has undertaken in order to capture the subtle details and tight spaces seen here in deep focus and without distortion. But that’s only the start of what Smolarkiewicz has accomplished. Throughout a woman’s place? one vital question runs: how is it that we are allowed to witness this? Beecher nursing a beer seems as shut down as the elaborate stereo system she stands behind, its glowing pilot light almost the only evidence of both their potentials. 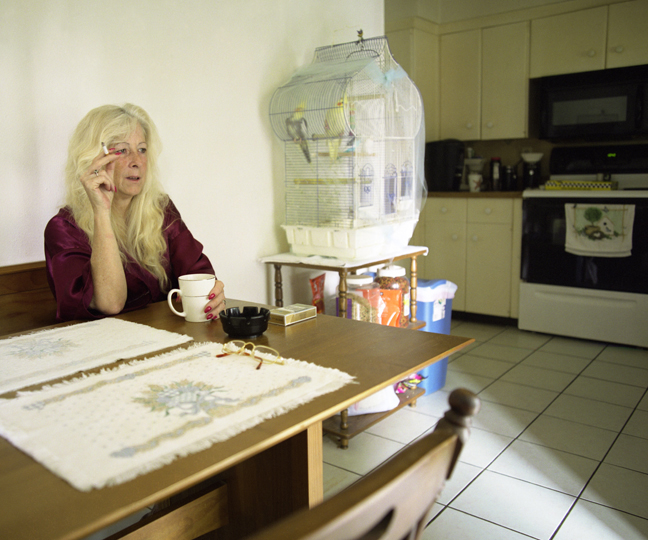 Even as she lapses into an introspective moment, Brenda’s blond mane celebrates her affinity with the yellow crested cockatiels she keeps close by. And while it’s easy to imagine a photographer being welcomed into Pani Koluch’s Warsaw apartment to join the family meal, that doesn’t explain the intimacy that we eavesdrop on between Holly and her son, Sarah and her daughter, or Meredith and the man who stands in the dark just outside her brightly lit kitchen. Talent is a privilege, and with it comes opportunity. Zuzanna Smolarkiewicz shares her boon with us, permitting us to seemingly enter these truly private moments without compromising either their quality or the capacity of our presence. 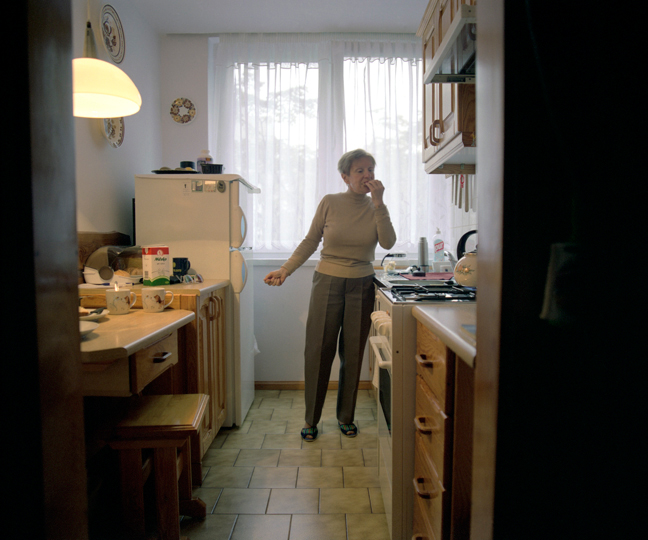 Even if it’s true, as many artists and critics have said, that every portrait contains the ghost of a self-portrait, it’s not true that every artist who makes portraits can develop that latent image into something with a life of its own. Rembrandt used himself and his family as figures in his biblical subjects, but it is in the felt humanity in his canvases that we now recognize his presence. Zuzanna Smolarkiewicz is not yet Rembrandt, but that is a matter of degree. Meanwhile, her portraits have an affinity with his that most artists neither possess nor aspire to. The self-portrait that her pictures of her friends bring into view incorporates curiosity, compassion, humor, and understanding. It may not yet be a complete picture of human nature, but it is a completely human picture. 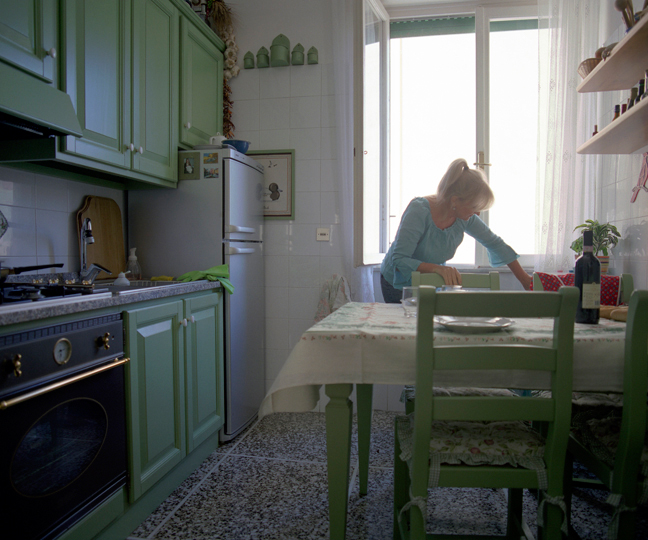 Zuzanna Smolarkiewicz’s MFA Thesis Thesis exhibit, a woman’s place, is on exhibit at the University of Uta’s Gittens Gallery through October. Her work can also be seen on her website.