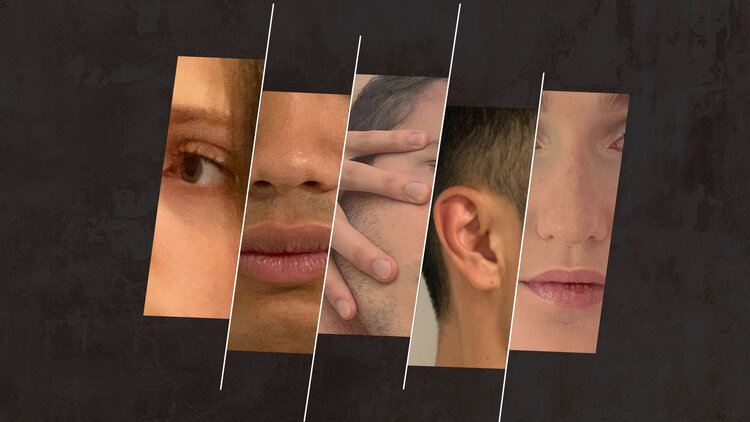 Brine Dance, a Salt Lake City collective, presented its fifth annual concert at the Rose Wagner Performing Arts Center as part of Repertory Dance Theatre’s Link Series. Symmer Andrews, Ashley Creek, and Sara Pickett are the creatives behind the collective, and have co- directed and -produced its five concerts thus far. In an attempt to show “longer, more in-depth works … to give the audience the opportunity to experience [a] high caliber of choreography,” the trio presented four dances by five choreographers, a major departure from last year’s structure, which featured work by 18 choreographers split between two programs.

There was no question that the show was well-rehearsed; all dancers performed with extreme clarity and all work was clean and contained in a way that left little room for audience interpretation or nuance. The overarching physicality of the show alternated between precise, isolated gestures and simultaneous, whole-body movements.

“Permission to Be [VDSW],” a dance for four women created by Daniel Do (of RDT) and Mar Undag (recently of SALT II) began in front of the show curtain, working with repetitive, direct gestures to the beat of the music, then proceeded onto the stage, the music oscillating between genres and moods. Indicated by the program notes, the dance aimed to demonstrate the power of the four women. Comprised primarily of overlapping solos and duets, the piece’s many entrances and exits allowed the dancers to change their various all-white costumes. The final image had the four women with their tops off, snapping to turn off the lights.

Portland-based artist Trevor Wilde’s “Anotherwom (e) n” utilized a door frame and a pile of red roses. The first solo spoke of a dark memory while a contemporary ballet sequence was performed. As a counterpoint, a second soloist leapt around the stage with a bouquet of roses, as if in love. In a duet, the two dancers often mirrored one another, alternating silly faces and classical lines. The simple black dresses accentuated the leggy choreography.

“TASTE,” by Rebecca Aneloski, in collaboration with her performers, had a refreshingly clear identity: flirty, floaty, and bizarre, the choreography employed nuance and spatial logic. The physical textures allowed characters to develop complex personal identities inside a distinctive world. Suspending time, condensing time, and other surprising timing choices added to the piece’s pleasure and satisfaction. “TASTE” evoked images of family structures and personal struggle. Aneloski crafted a series of overlapping tableaus with striking moments of reflection that I continue to reflect upon.

“8.6.45,” choreographed by Lauren Broadbent, a Junior at the University of Utah, was the final piece, and one primarily driven by its music. Strong beats drove the dancers’ sharp gestures around a table and a bench. Hands were placed over eyes, mouths, and ears. The dancers occasionally assumed a formation to face the audience, moving through punching and slashing choreography, and then finished with a large piece of white fabric.

As a reviewer, I am not completely certain of my role. I do not feel I am watching to determine whether something is “good,” or not — that is far too subjective a decision, one best left to each audience member. When I watch something like Brine 5, however, I do have some questions about the dynamics of dance-making. Some are specific to this show, some specific to Salt Lake City, and some on a larger scale.

Why do choreographers make dances seemingly based on experiences that are not their own? Why do men choreograph dances with the expressed intent of highlighting the experiences of women? Why would a young choreographer make a dance about Hiroshima, an event that predates her by half a century?

Why do dancers use voice on stage, and how does it relate to the physicality of the body? Did the artist(s)/producers obtain the proper licenses to play the music of Kendrick Lamar? Is it appropriate for four white women to perform to Lamar’s music?

Can a dance find an identity succinct enough to find multiplicity inside of that clarity? Why might a dance have enough content to fill multiple distinct works?

How does a community push the boundaries of a predominant movement aesthetic?

How does a community create space for artists to take risks while also holding the entire community to high standards of craft and quality?

It is important for there to be more independently produced shows like Brine 5 in Salt Lake City. But as we create more space, we should continue to ask questions of ourselves, our peers, our mentors, our collaborators, and those with the power to create more space. We may not agree upon the answer or the methods, but in the asking, we may create the possibility to discover the unimagined ways that dance can transform, heal, and connect communities.