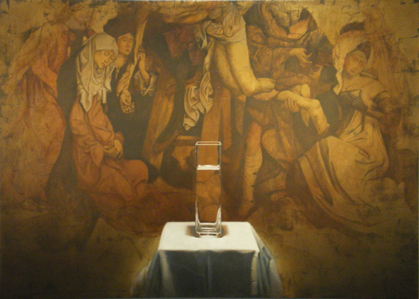 Still Life with Master of the St. Bartholomew Altarpiece

In his “Lamentation Over the Dead Christ, with Saints Jerome, Paul, and Peter,” Botticelli makes one of the Renaissance’s more subtle claims for the status of art and the artist. After all, of the three men he shows present at the crucifixion, one was not yet born, one had yet to recognize Christ, and the third had fled in fear on the fatal day. Thus the painter could be equating his witness to theirs: what they witness by the power of devotion, the painter witnesses by the power of imagination. The further suggestion that oil and canvas can bring us, as viewers, into the presence of actual events is one side of the chasm that separates the Renaissance from the Modern mind. Ron Richmond, who quotes a portion of the Botticelli “Lamentation” in his “Bowl With Botticelli” (which was at the CUAC this past summer but is not at Snow College), stands with one foot on either side of that divide. His medieval ideal of the role of painter should please those who feel that art, in abandoning God, has gone astray from its best possible subject matter. Yet at the same time, he works as a painter in the continuing tradition of Modern-to-Post-Modern art history. In short, he makes work both his fellow religionists and secular humanists can enjoy without losing self-respect.

A painted still life depicts an assortment of objects chosen by the painter for their significance, arranged to produce a compression of thought and feeling. For the viewer, the sensory impact usually comes first: a tightly composed, closely observed set of visual facts. Significance arises from the choice and juxtaposition of objects and atmosphere to establish a mood. The 15 medium-sized paintings in A Still Life, currently showing at the Snow College Art Gallery, expand and simplify the list of conventional still life subjects and arrangements, but they also make the punning suggestion that the activity of painting can give the painter’s life significance: contemplation becoming a kind of prayer.

In a profoundly retrograde step, Richmond turns his back on the artistic clichés of our time—notorious public behavior and solipsistic individual sensibility—in favor of a medieval ideal of work as worship, equally appropriate to private or public space. While this approach still admits the possibility of self-indulgence (even martyrdom can be an ego-trip), these paintings display two virtues, discipline and restraint, that aspire to take the sin out of scopophilia and put purpose back into the otherwise pure pleasure of looking.

Visual magic without a larger purpose leads nowhere but to empty excess: a fact that can be verified in each new generation of television car ads. Ron Richmond (with whom I briefly shared an office when he taught drawing for a semester at Snow) found a way out of this dilemma—a way to make art that is at once visually magical and yet substantial in content and meaning—enunciated by Oscar Wilde in a comment he displays in the gallery as his artist’s statement: “All art is at once surface and symbol.” Richmond’s project, then, is to find the proper match of subject and treatment that will let him unify the surface with the symbol. The images that result, when they succeed, bear witness to the capacity of seemingly trivial intersections of matter and form to fill with significance. The objects he paints then glow with meaning the way heated metal gives off light.

The arrangement of objects in Richmond’s “Still Life with Master of the St. Bartholomew Altarpiece” (oil on metal leaf and canvas, 50″ x 70″) is at once formal and intimate.| Taking the place of the liturgical altar, a white linen cloth on a humble table becomes a sacred space where sits a glass vessel two-thirds full of water. This visual trope can be seen in two other works, titled “Token” |1| and “Vow.” In each, three only indirectly visible elements—glass, water, and light—interact to produce a tangible sense of each other’s presence. Despite its familiar materials, it’s a very private symbol. Adding to the sense that this is Richmond’s personal sacred space we are entering is the way he handles the painted altarpiece. In “Bowl with Botticelli,” the artist linked the two title objects by the juxtaposition of Christ’s dangling arm (in the painted painting) and the bowl set before and beneath it. It appeared as though the red fluid in the bowl were blood caught falling from the nail wound in the painted hand. In “Still Life with Master of the St. Bartholomew Altarpiece,” the narrative connection between the elements is subtler. The original “Descent From the Cross,” by the Master of the St. Bartholomew Altarpiece” (who has been called “the best painter about whom we know nothing”) was painted around 1510. Unlike Chris Young, whose portrait of Christ at the Springville Museum is aged to remind us of the venerability of the subject, Richmond paints the Descent as though the unknown painter were still working on it. Squares of gold leaf show in the corners and the colors are attenuated as if we are seeing the under-painting. It’s as though Richmond’s “Still Life” depicted a chance moment in the Master’s studio five hundred years ago. Yet it is simultaneously the present today, a fact clearly demonstrated by the optical vividness of the presentation. No Gothic or Renaissance artist could have painted such a convincing presence. 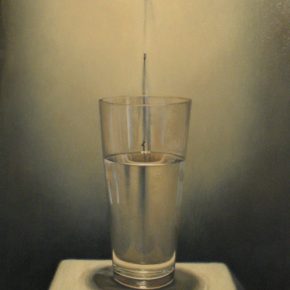 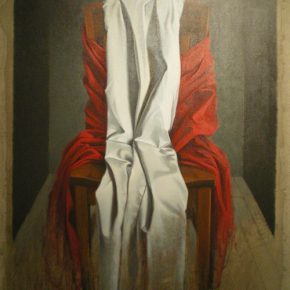 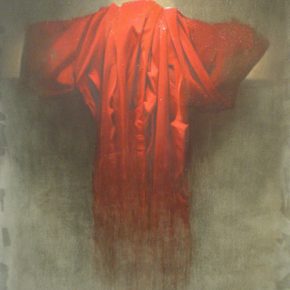 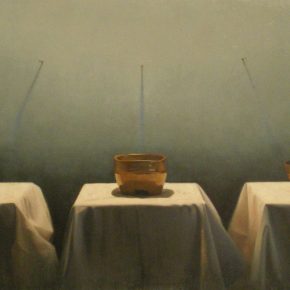 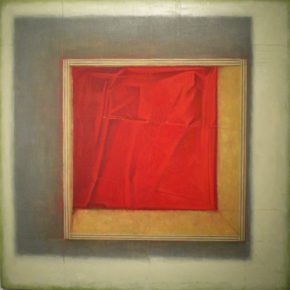 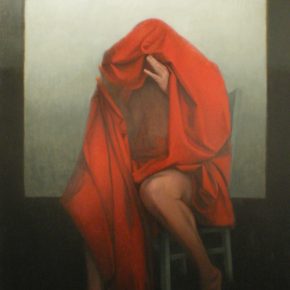 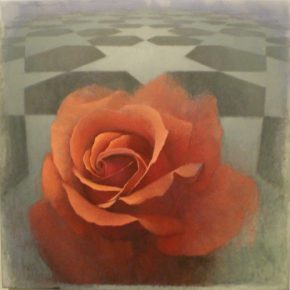 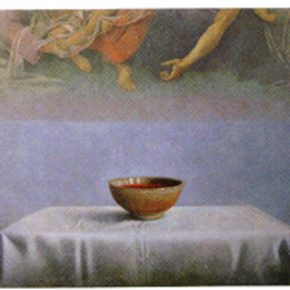 In all three images of water, glass is restored to its medieval value, when its capacity to fill with light the way the body is filled with the spirit made glass the primary artistic medium: not only for windows but for the covers of books, relics, and other sacred objects. Glass jewels were even inserted in paintings. Water, while it seems a natural symbol—protean as life, taking its specific form from the vessel and dancing with light—probably means something here far beyond its medieval role in standing for purity, or even for indirect knowledge of qualities like purity, spirituality, and grace. Like the loaf of bread and glass of water depicted in Richmond’s friend and fellow painter Chris Young’s “Emblems,” now on display at the Springville Museum of Art, the meticulous observation of detail sets these objects up at the intersection of secular demonstration and religious statement. What they stand for is themselves as objects of consciousness: for the profoundly un-stylish sentiment that we can know anything at all about ultimate reality. For whether we choose to call it reason or conscience, it is only through individual power to connect with reality that we arrive at knowledge.

In a review that appeared in these pages in May of 2004, Tony Watson argued that Richmond’s art steers clear of the excessive didacticism of much Mormon art. I think he’s right, although I don’t think the larger criticism can be limited to a single faith. He also wrote that one painting, “Exchange # 1,” was too direct in its metaphor to require comment. He saw its imagery—an overturned chair by a red cloth and another, upstanding chair draped in white—as metaphors for redemption. Context is important, but I wonder how Watson would have responded to a reading of the painting as a Cold War metaphor, in which the virtuous West overcomes the Communist East. Nor are crucifixion and redemption the most universal reading: how about the finite and the transcendent, or suffering and vindication? It seems to me that the ambiguity and perhaps even sincere uncertainty in evidence here sooner or later must alienate this artist from the market for didactic illustration. For his part, Richmond seems less interested in accommodating that segment of the public, which in any event buys little art, than in attempting what is, sad to say, a far more daunting pursuit: convincing the sophisticated art market that religion is still a valid artistic impulse three hundred and thirty-five years after Rembrandt . . . and thirty-five years after Mark Rothko.

Proof that Richmond is interested in a truly modern religious art can be found on the wall across the gallery from the “Still Life,” in a series of drapery studies titled “Robe.”|3| In them he equals John Singer Sargent’s knack of capturing the play of light over fabrics in ways that dissolve when approached, only to reappear when the viewer backs away: all this while still making the light at once sensuous and unworldly. The vestments of Christ are, of course, one of the major themes in Christian art history: invariably Roman, usually in an Imperial (purple) or royal (red) color, they help track the solidification of the prophetic image in the centuries during which Christianity became the established church.

Richmond could be drawing a parallel between the first centuries of two different religions, but here again he seems rather to be marching to his own drumbeat. As in all his best work, he approaches this subject and the questions it raises with delicate ambiguity, shaping a mass of fabric that suggests, on the one hand, an energetic torso that might wear it, and on the other, the cross. Then, at the edges of the image, where it seems to fade with the failing light, a close inspection reveals that the illusion has actually broken down into paint and brushstrokes. Similarly, at the margins the paint visibly turns into a frame: a device Toulouse-Lautrec would have enjoyed. The primal Modernist strategy—arguably the key to all good painting—in which the illusion of paint is ruptured to call attention to our willful suspension of disbelief, here reminds us that neither the surface nor the symbol grants exclusive access to the truth.

If the universe may be glimpsed in a grain of sand, Richmond’s art suggests that seeing that grain of sand (glass of water, bolt of red satin, well-worn icon, utilitarian object) clearly might reveal something more precious, more absolute, than dogma. Light may be only at best indirect evidence of what surrounds us, but it is still the best evidence we have. Richmond’s choice to trust its testimony goes a long way to righting the balance between the idea and the eye. Duchamp was right to send the pendulum back from the extremes of “retinal” art that he rejected before World War One: art that was “just there to be looked at.” But as Richmond—and Chris Young, David Linn, Brian Kershisnik, and a host of other painters on the scene today—demonstrate here, a retinal image is as qualified as any sensory datum to stimulate the mind.