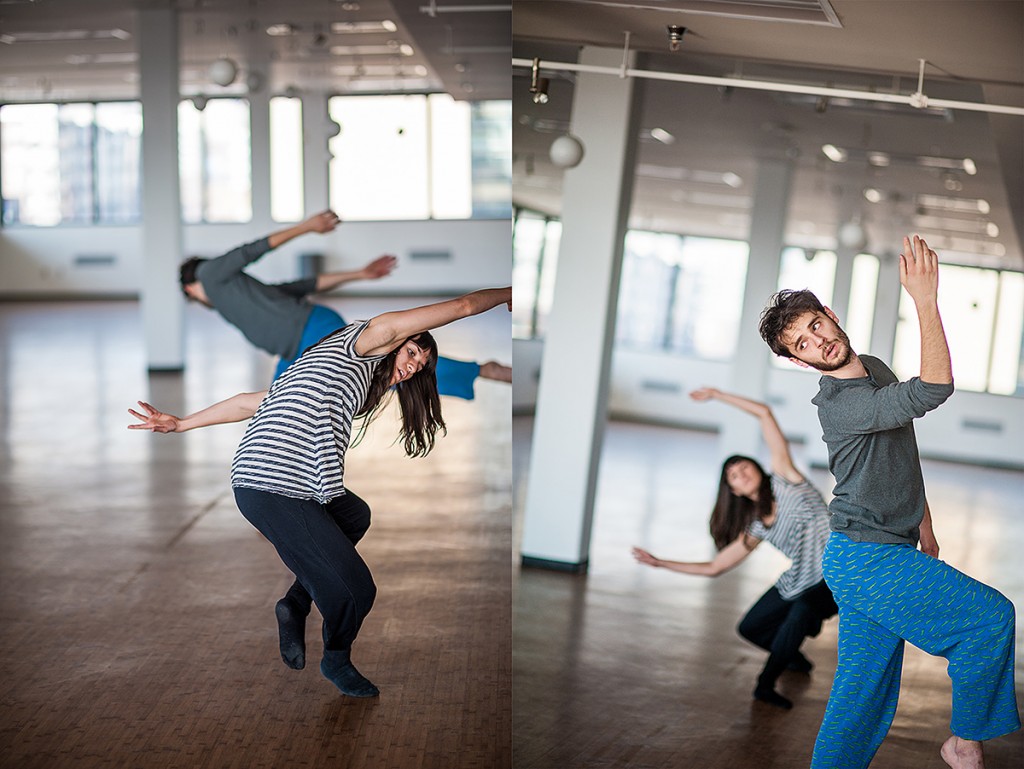 Choregraphers Kitty Sailer and Sam Hanson practice movements from their piece Dog and Pony earlier this month. Photo by Will Thompson.

A “dog and pony show” usually refers to either an elaborately produced advertising or publicity event designed to promote an idea or product, or to a poorly produced traveling circus show of little substance or talent.

“Dog & Pony,” a dance performance presented by the very talented Kitty Sailer and Sam Hanson, was neither.  It was a simply produced, well-executed, and charmingly entertaining evening of dance and contact improvisation, wandering at times into performance art. Despite bitterly cold weather, a recent snowstorm and icy roads, the show not only sold out, but required extra chairs, and some dedicated dance fans even sat on the floor.

The dancers also interacted with the audience, variously asking audience members for massages, offering massages, teaching dance moves, and sitting on laps. The audience was more than game, laughing, playing, and even joining the dancers in a chorus of “Edelweiss,” adding an energetic, interactive component to the dance, breaking down the usual barriers between “performers” and “audience.”

Finally the lights dimmed, and the dancers, once more illuminated by flashlights, stood surrounding the seated Sailer. While the singing of “Edelweiss” continued, each dancer took a turn giving Sailer a passionate kiss, fading to black as Hanson gave his collaborator the final kiss.

While in some hands this could be either an explicitly sexual dance or a juvenile exploitation of sexuality, in Sailer’s skilled choreography the dance became an exploration not of sexuality itself, but rather of the emotions we have around sexuality — the vulnerability, insecurity, shame, humiliation, desire to experiment; the things we do only in the dark, the thoughts and feelings we keep hidden in the dark chambers of our hearts and minds. And while this exploration could have been heavy and psychologically ponderous, it was actually light, humorous, and engaging, eliciting frequent laughter and enthusiastic participation by the audience. I’ve been told that “Honey Cake Pony” is a German idiom for feeling good, and “Honey Cake Pony” is very much a feel-good dance.

The main event of the evening, however, was “Dog & Pony,” a duet by Hanson and Sailer, who are both accomplished and courageous dancers and choreographers. This was their first collaborative effort, and they complement each other quite well. When I asked them what their conception of “duet” was, they both responded that a duet was a relationship between any two people, or even entities; that one could have a duet with a pony, or even the floor. However, I experienced their duet as an exploration of a relationship.

The opening section consisted of both dancers performing the same movement, mirroring each other, experimenting with shape and form, starting with simple movements and building on them so they became more complex. It reminded me of the “falling in love” stage of a relationship, where mirroring is the predominant mode of relating.  It was remarkably fluid and lyrical, yet completely unlike traditional duets, and utilized a unique, quirky movement vocabulary.

Following sections explored the separation and individuation that necessarily occur in a relationship, as well as elements of sexuality and isolation.  This is explored perhaps most starkly in masturbatory scenes using popsicles as proxies for pain and coldness. Parts of the dance were remarkably synesthetic, to the point that I heard dialogue in my head when in fact there was only movement without even music.  The dance explored squabbling, rejoining, vulnerability. Eventually individuation was achieved and Sailer performed a solo as Hanson watched from onstage, and Hanson performed one while Sailer watched from an audience member’s lap.

Both dancers do an excellent job of connecting with the audience, not just through the choreography, but through language, facial expression, and body movement, effectively breaking down the “fourth wall,” inviting the audience to become part of the performance. As Hanson said, “This is probably the only time we’ll all be together in this way”.

The dance ends with the two dancers leaving the building together, off to another adventure, an unknown future, and leaving the audience to ponder where their future may lie.

While “Dog & Pony” was long, and could have benefited from a bit more discipline and tightening, it is overall an impressive and successful collaboration between two very talented young dancer-choreographers who are fluid in their use of not only dance, but also language, improv, humor, emotion, and a unique sense of what makes us human.

As demonstrated by the sold out show and the enthusiasm of the audience, Salt Lake City not only has room for more experimental dance, but is actively seeking it out.

Sailer is leaving soon for Iceland and possibly more travels abroad, while Hanson is involved in curating an upcoming show and interested in creating a video. However, I expect (and hope) we’ll be seeing more in the future from these two talented dancer-choreographers.

For anyone interested in experiencing more experimental dance, be sure to check out Arrivals/Departures, a film and video display opening January 18 and running through early March at the Rio Gallery.  There will be live dance performances 7-9 pm during Gallery Stroll in both January and February.

Tagged as: Kitty Sailer, photos by Will Thompson, Sam Hanson