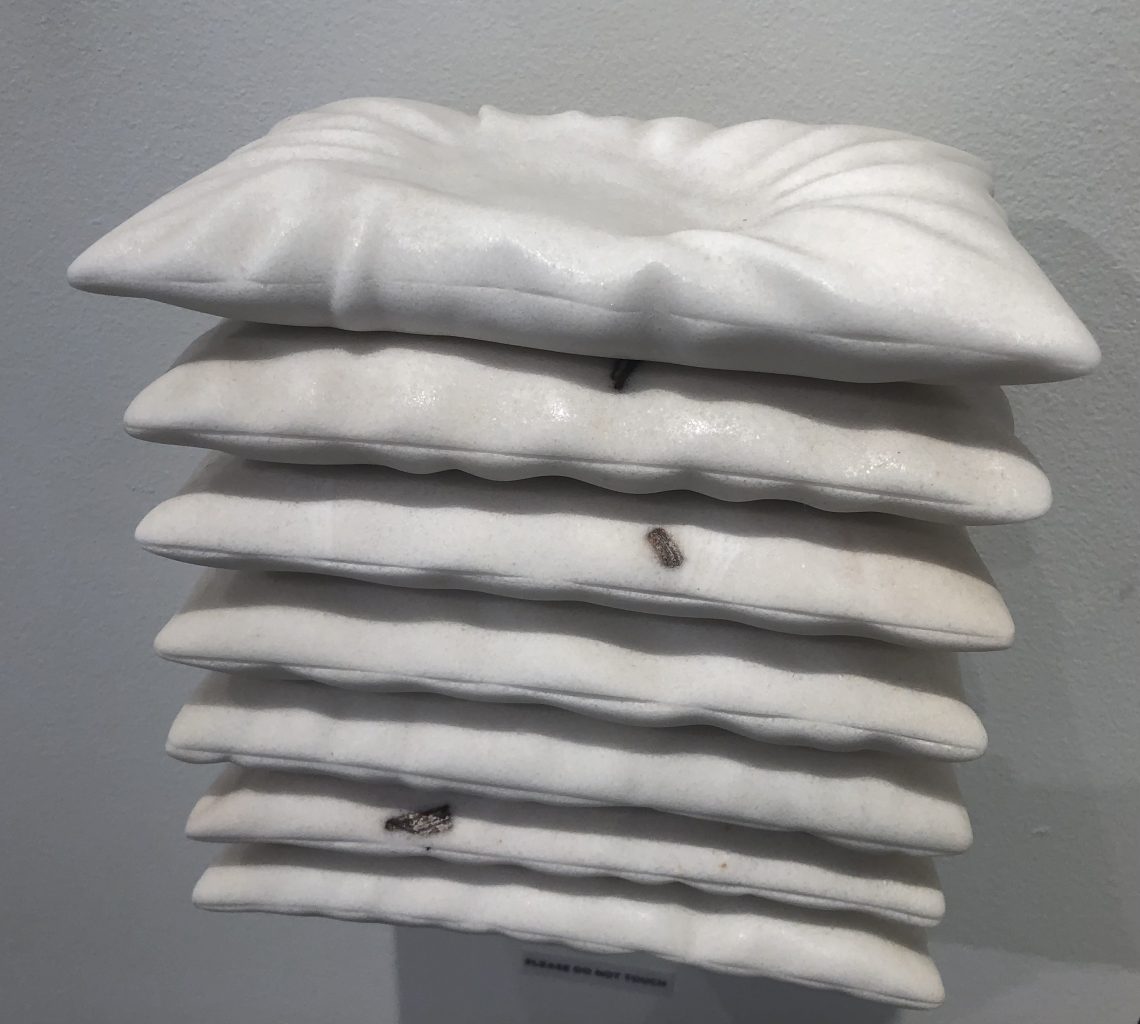 The magic of art has much to do with making one material convincingly impersonate another. In skilled hands bronze, marble, paint or paper can simulate something as subtle as flesh. One of the more unlikely magical acts seen in our time and place is that of Pam Gazale, who has done with salt what others have done with those more conventional substances. Initially a graduate of the Rhode Island School of Design, Gazale, like many before her, took up glass art and found her way to the Northwest. During a career that has stretched over 35 years, though, she made her major breakthrough with salt. One of her deeper objects is “Trousseau 2,” a stack of seven pillows, one for each day of the week, which she titled not after the dowry, the potential bridal property that is forfeit to the husband, but after what may be the only luxury a bride will ever be able to call her own, once separated forever from friends, family, and the life where she was known and valued for herself.

“Trousseau 2” is one of 19 works of art that were donated in 2020 to the Nora Eccles Harrison Museum of Art (NEHMA), each of which was selected by Driek and Michael Zirinsky, collectors in the grand manner in Boise, Idaho, on the basis of its relevance to Utah’s arts community. Gazale’s salt works first appeared in Seattle, where the proximity of the salty Pacific Ocean gave them some local cachet, but to see them after driving through the vast sterility of the Bonneville Salt Flats, and past the liquid desert that is the Great Salt Lake, is to be reminded that a little salt is necessary to life, and a little more can make life more tasty, but that only a dollop more may be fatal. That these purported luxury objects are made entirely of salt marks them as ironic, a mockery of comfort as hard as stone, even as their promise might deceive an innocent youth into wanting to be a bride.

NEHMA has become one of the finest repositories of art in the mountain states, which isn’t surprising when its three decades of collecting are taken into account. Recently, its gallery space was approximately doubled in size, but that leaves it still far short of being able to display more than a fraction of its 30,000-plus objects, any more than the Louvre, the Met or any other grand institution attempting to be responsible to its mission can do. Anyone who has been to the Louvre can testify to the reality that having dozens of similar objects jammed together on the same wall can be impressive, but makes adequately appreciating them difficult. So NEHMA has come up with another approach, one rooted in the widespread museum practice of storing prints in flat file folders, where they remain accessible to consult and appreciate without requiring vast wall (and inevitably, floor) space. At NEHMA, works of art that range up to a few inches thick can be shown, each in its own drawer, which then fits together with others to make a cabinet appropriate to a particular show. Each work is then separate, and may be studied in isolation by pulling it forth. The Zirinsky Gift is showing in a cozy gallery wherein eight of the works, those which are too large to fit in the drawers, are hung on the wall, while another eleven are in a custom-assembled cabinet that stands centered in the room. Each painting, print, or other object can be examined through a protective glass cover, an almost universal compromise with precious or vulnerable objects, yet seen far more intimately than a wall mounting allows. Metaphorically speaking, it’s rather like holding the object in ones hands, and it makes it possible to contemplate 19 works in a space where more than eight would be crowded and their unique value compromised. 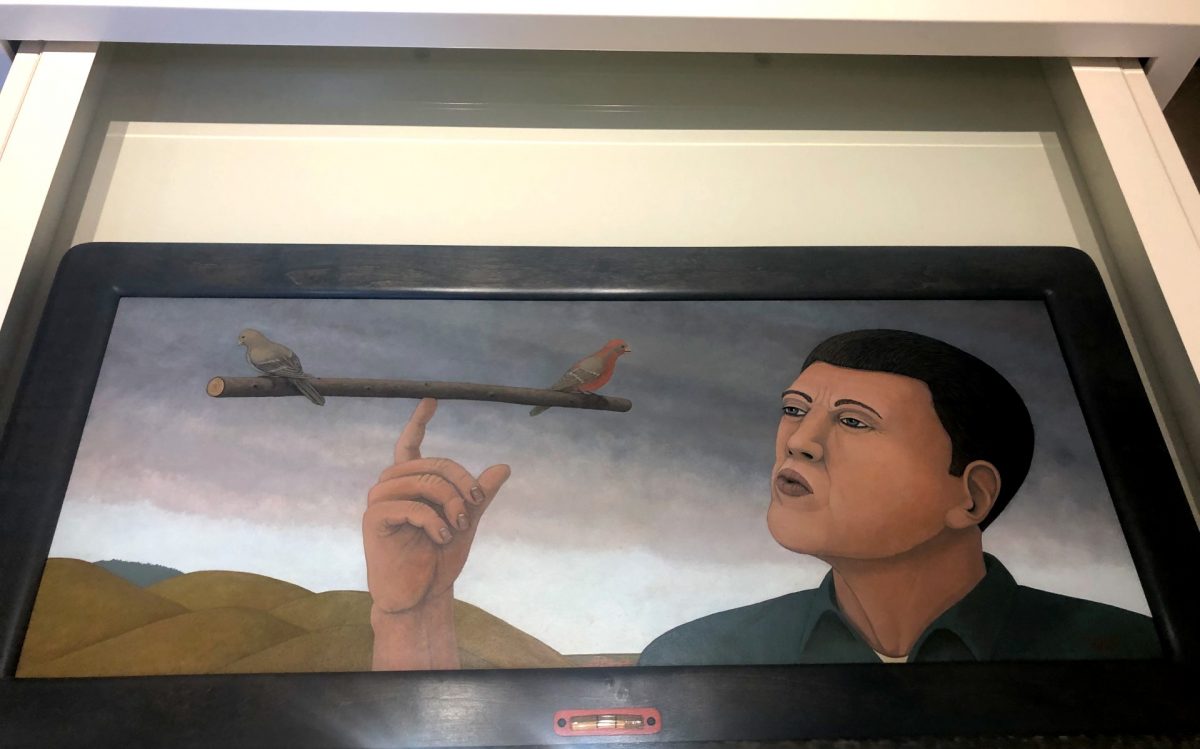 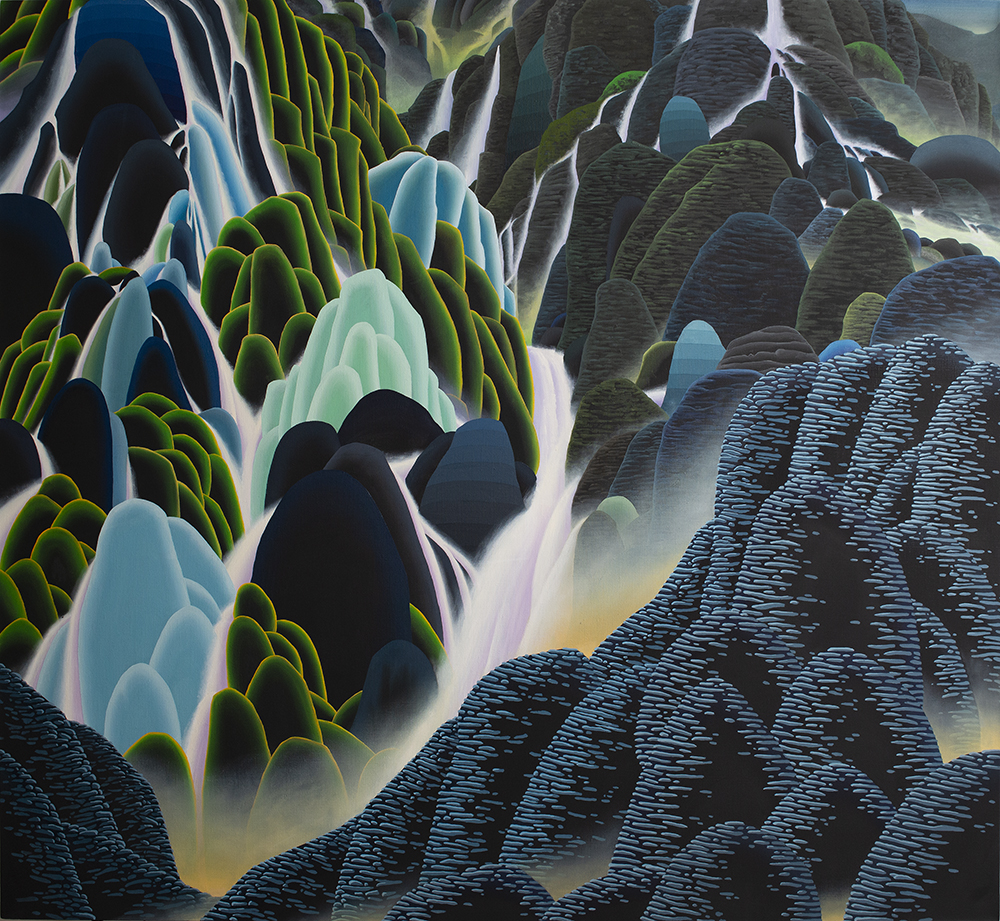 Of the works in the Zilrinsky Gift, only one, an oil-on-paper painting by Brian Kershisnik, is by a familiar Utah artist. It represents an early version of an idea he elaborated on later: the metaphor of flying lessons representing spiritual practice. To see this work surrounded by other sophisticated works by artists from nearby states and cities gives Utahns a chance to see it the way it might be seen by those in Seattle, say, as if reflected in a regional mirror. Utah galleries and museums include some collections that foreground local artists and some that don’t, but viewing only Utah arts gives a distorted picture of the universe in which Utah artists practice, which includes art from other places as well as that of their immediate neighbors. One work now at NEHMA that seemed quite at home in Utah is Adam Sorenson’s “Dejeuner,” an oil-on-linen fantasy that depicts a mountain stream as it tumbles down between bare rocks and forested cliffs of both realistic and imaginary colors and shapes. Although the water is falling, the eye, rather than follow it down, is more likely to trace it up into ethereal and distant heights that recede into misty distances. This is not the often literal landscape we see and may encourage painters to reproduce, but a vision of all that landscape can become in our imaginations: more real because more like what the mind seeks out in less ideal, more real places.

Another work that feels indispensable to the Utah sensibility is John Grade’s “Ground,” a view into a misty and surreal, yet perfectly comprehensible, high-mountain valley. On the right, the pattern of interlocking squares may suggest a much-weathered and restored floor or mosaic wall, while on the left the surface has been stripped away to reveal a honeycomb structure of many small cloisters. What appears to be a mountain range in the distance, on further inspection, seems instead to be another, similar tube-like structure that lies beneath and surrounds this one. It’s a space seen for the first time, yet instantly recognized.

It’s possible that the only ones who will fully appreciate all 19 of these works are Driek and Michael Zirinsky. Viewers only interested in the familiar and homely may not miss seeing them. But anyone who wants an expanded awareness of what Western art can aspire to would do well to accept and get to know the Zirinsky gift.

“Ground” is an early drawing by Seattle-based artist John Grade.