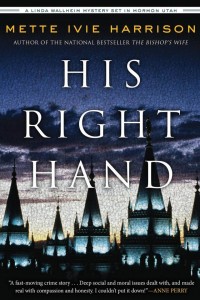 In a recent article, The Salt Lake Tribune said Mormon mysteries have become a hot new genre, with Mette Ivie Harrison’s 2014 national bestseller The Bishop’s Wife leading the pack. Her second in the Linda Wallheim series, “set in Mormon Utah,“ however, offers little mystery and a lot of Mormon. And much of the Mormon was a mystery to this “gentile” reader.

The initial premise of His Right Hand is dandy. Carl Ashby, second counselor to Linda’s husband, the ward bishop, is a very strict Mormon (especially so around the home – his wife, nearly an empty nester, is not “permitted” to seek a job because he views this to be against church teachings) who becomes the victim of what is perhaps an unnecessarily disturbing murder (but then even Agatha’s books have the occasional gory moment) in the Draper ward library. Linda, of course, solves the mysteries in the ward.

An autopsy reveals that he is a she – breasts removed, though without further gender reassignment surgery. Why didn’t his wife and two adopted children seem to know? Did anyone else in the ward guess? (The bishop thought Carl kept on a shirt while swimming at Boy Scout Camp out of inordinate modesty.) And what about the hundreds of ordinances Carl performed (ordaining young men into the priesthood, baptizing people into the ward, temple work) – can these be valid if they were in actuality done by a woman, who could not hold the Mormon priesthood? One pretty much knows whodunit early on, if not exactly why, but church questions are, alas, much at the center of the mystery.

Linda, her husband, and numerous sons share Family Home Evenings (His Right Hand is an apparently continuing story about Wallheim family life); people are engrossed in “scripture” (and occasionally share some with the reader) with no explanation of what that means to Mormons; there is a confusing description of temple goings-on that causes a rift between Linda and her dear friend (and which I expect will be resolved in the next book); and some have “revelations.”

Linda, for example, is involved in a high-speed chase on I-15. “What in God’s name was I doing?” she asks (that was not the revelation, though it ought to have been.)

“What should I do? God tell me what to do. Give me a revelation.

And it came to me. Like a fist to the head. I felt enormous pain, a flash of something that was either a light or just so much sensation it overwhelmed me. I might have crashed, but my arms were still steady on the wheel, as if someone else were holding them there.

Stay! I heard a voice say to me. It sounded like Carl’s ghost voice, low and smooth and absolutely convincing.

This type of inspiration, or revelation from God, is apparently a common part of Mormon experience. Later, however, Linda believes this spiritual help came through her husband’s prayer. (What the . . .?)

Other plot developments require a fairly proficient understanding of Mormon culture and belief — things like sealings and temple films — to be appreciated. When Linda’s friend, Anna, confesses to a brief affair and asks Linda, rather than her bishop husband, to put her hands on her head and give her a blessing, Linda balks.

‘”Me? I asked, confused. I’d always known Anna was a bit of an iconoclast, but this went beyond skipping Relief Society meetings during the week and talking about Ordain Women leader Kate Kelly with sympathy.

“In the temple, women put hands on women and bless them. I don’t see why it’s not the same outside the temple.” She looked at me directly.

I was the one who flinched away. Because it wasn’t the same. We both knew it wasn’t. She was talking heresy now, the very thing likely to get someone excommunicated from the church – all temple sealings canceled, no longer allowed to speak to or serve the ward family.

“You’re always talking about how women need to take more power within Mormonism,” said Anna, her head tilted to the side so that it caught the light from the rising sun just so – it almost made me think of Eve in the temple film that was essentially the story of the Garden of Eden.

“I do talk about women taking power,” I said. But I didn’t mean giving priesthood blessings – did I?

Anna started walking again. Her tone was more confident now. “Women are the reason I have stayed in the Mormon church all this time. My connection with other women, and the way I feel that we are the same when we worship together. Isn’t that true for you, too?”

I thought about it, and realized that I didn’t know. I had come back to the Mormon church years ago because I wanted – something. And then I’d found Kurt. I guess that for me, my religion had been about family. But then it wouldn’t be the same for everyone.

Anna squeezed my arm. “You’re always thinking about how to follow the rules, or how to twist them to fit a situation. But someone else’s rules are never going to make you perfect.”

We walked back to her house and I was left with a lot to think about.”

And it’s obvious that Harrison’s book wants to give us a lot to think about as well. Perhaps I’m unused to mystery novels going on a mission, but this one does, crusading throughout for LGBT acceptance (or at least understanding) in the church and among its members. I had believed (and sort of resented) that Harrison was capitalizing on contemporary LDS hot-button issues, but the author reveals in an end note (replete with website links) that the book “came out of a journey our family has followed along with our dear friends” whose Mormon son, Grayson, came out as transgender in 2010 – and all this topic has generated for the faithful then and today. With that, I almost forgave her a few implausible turns in the story line, although some transgender people might not.

It must be said that I have lived in Utah for decades and made every effort to acquaint myself with the dominant faith and its literature (both to honor LDS friends and anticipate the Legislature) and never have felt like such an outlier as while reading this book. I can’t imagine how anyone living outside the state or the religion can appreciate it as they clearly did Harrison’s previous novel.

While His Right Hand is enjoyable, I fear I am not a convert. 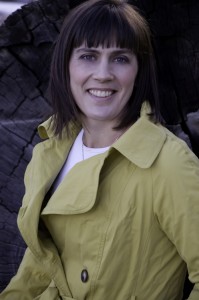 Mette Ivie Harrison holds a Ph.D. in German literature from Princeton University and is a nationally ranked triathlete. In addition to two mysteries, she has written numerous books for young adults. A member of the LDS Church, she lives in Layton with her husband and five children.